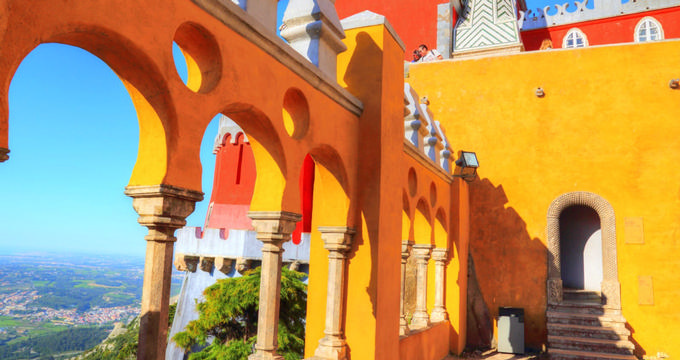 Portugal is a breathtaking country to visit, with rich culture in the cities and expansive wilderness elsewhere. The country is dotted with stunning volcanic caves, formed by the movement of hot lava through the rock. Its pristine blue sea also makes for unrivalled water activities, and with dolphins and whales frequently playing in the warm waves, a visit to Portugal is one that you’ll never forget. However, it is the country’s history which is perhaps one of the most interesting things about it, and with numerous castles scattered across the country, it will be hard to not visit one of these great monuments. CDC information for travelers. Hours/availability may have changed.


1.Park and National Palace of Pena 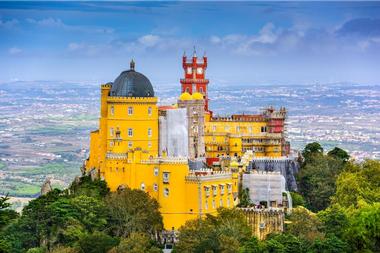 Situated in the Sintra hills, atop its own peak which ensures that it can be seen from anywhere in the park below, the Park and National Palace of Pena was created in the 1800s by King Ferdinand II, who added to the existing 16th century monastery of Our Lady of Pena to make it the wonder that it is today. The palace was created with clear references and influences from the Moorish and Manueline styles, and is regarded as one of the best examples of Portuguese romanticism, inspired by Germany, from the era. The park also features a curious little chalet which had been commissioned for the King’s second wife, Elise Hensler. Compared to the grandeur of the palace, this two-storey building is something of a breath of fresh air. The park was added to the Network of European Royal Residences in 2013. 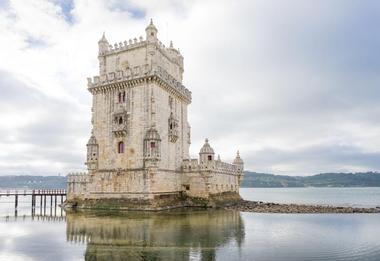 The Belém Tower was initially built during the reign of Manuel I, between 1514 and 1520, as one part of a large defensive system for the Tagus estuary. There are two notably distinct sections to the castle: the more modern bulwark, the home of the castle’s artillery power from which up to 17 cannons could be strategically fired at once, and the mediaeval keep tower, which would have been extensively reinforced to allow for a safe position for the castle’s residents, should the rest of the building be destroyed. The castle consists of a number of intriguing rooms and spaces which can be visited, including the bulwark and its terrace, the southern façade, the Governor’s room, the King’s room, an audience room, a chapel and the tower terrace.

3.Castle of the Moors 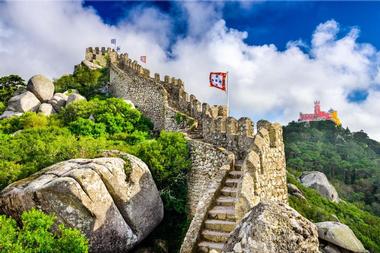 Built at as a fortification during the tenth century, the Castle of the Moors was created as a result of the Muslim conquest of the Iberian Peninsula. It overlooks the village below from its strategically advantageous position atop a peak, allowing visitors to experience some of the most spectacular views in the country. On a clear day, it is quite possible to see as far as the next mountain range. The castle represents a unique opportunity to marvel at the craftsmanship over multiple eras, thanks to the restoration works that were carried out on a semi-regular basis throughout the next millennia of its life. Arguably the worst damage to the castle was in 1755, when a devastating earthquake left much of it in need of signification repair. The commissioned work by D. Fernando added a touch of elegance and flair to the ruins of the old castle, as was typical during the era of romanticism. 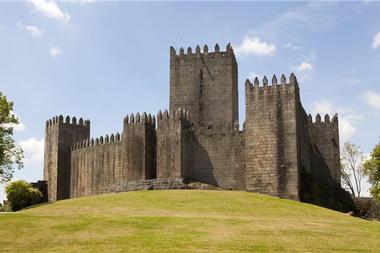 The Guimarães Castle is renowned for its ability to speak of the poetic beauty and military heroism that is so frequently seen throughout Portugal’s history. The castle was originally commissioned in approximately 968AD by the countess of Galicia at the time, Mumadona, who took pity upon the population who were being continuously attacked by savage Viking and Muslim raids. It continued to serve as a reinforced refuge over the coming centuries, with Count Henry—the father of the first king of Portugal—later ordering an even stronger castle. The castle sadly fell into disrepair and ruin with the invention of new artillery, but was lovingly restored in the early twentieth century so that we can experience its stories and beauty once more. 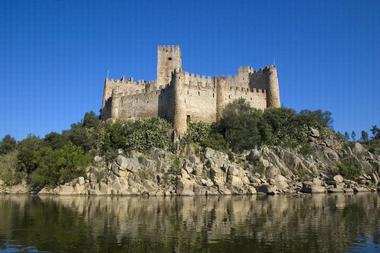 
Sat atop a steep island in the center of the Tagus River, the Almourol Castle has long been considered to be the most beautiful castle in all of Portugal. As a medieval monument, the castle is steeped in a rich militaristic history, particularly in relation to the Knights of Templar who rebuilt and renovated the previous monument—then known as Almorolan—into the majestic building that it is today. Many of the original Templar features can still be seen, including the same main doors which are engraved with the year of the castle’s foundation (1171). After the disappearance of the Knights of Templar, however, the castle was left to ruin and was only restored in the era of romanticism, as so many others were. Nowadays, the castle is used as a site for official residences and important events. 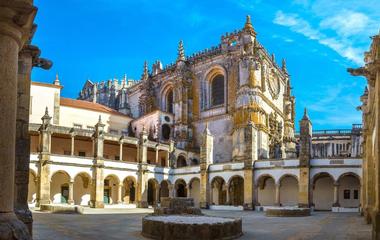 
The Tomar Castle was commissioned by the leader of the Knights of Templar, Gualdim Pais, after a particularly generous donation in 1159 from King Alfonso Henriques. Its edifice was surrounded by a belt of walls and, inside the castle’s grounds; the space was split further into three sections. The castle is built on the particularly fertile lands alongside the Tomar River, and this rich soil enabled the founding of a sustainable village around the castle a year later, in 1160. Today, a beautiful orange grove has replaced the old Military House, but the majority of the monument itself is still dedicated to preserving the original design and history of the castle. 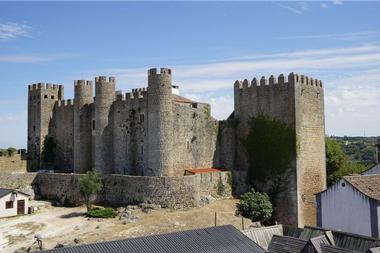 The Obidos Castle is said to be one of Portugal’s most famous buildings, and as an immense and intimidating structure, it is easy to see why. Despite its impressive age, however, most of the surviving features date back to the 1100s or later, due to numerous renovations and reconstructions over the centuries. The most recent renovation occurred in the mid-20th century, and nowadays the castle is home to an extensive collection of important historical artifacts and is run as a luxury hotel. Guests staying here can experience the true splendor of living like a Portuguese royal, which makes it one of the most exclusive places to stay in all of Portugal. 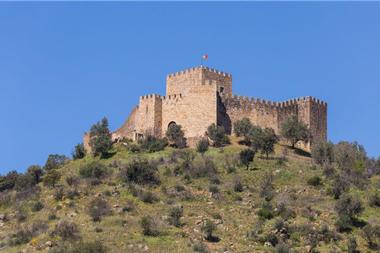 The Belver Castle was built in 1194 by the Hospitaliers. Overlooking the Tagus River, it was strategically placed atop a large peak as a powerful defense against the Muslims. It was intended that its construction would serve to settle the relationship between the two different faiths on either side of the river. Over the centuries that followed, it would remain relatively intact, with earthquake damage only affecting the fortifications but leaving the castle itself with just minor repair work needed. This good fortune allows modern visitors of the castle to marvel at the Roman-style militaristic motifs and fortifications that it features. 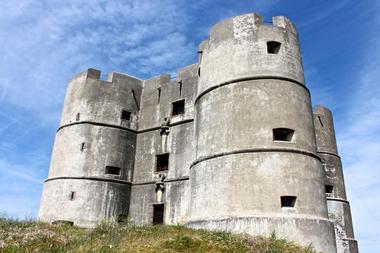 The Castle Of Evoramonte was initially built in 1160, and the original building features a heavily gothic theme (as was popular at the time of its creation). Later extensions were carried out in the Manueline style, and as a result, the Castle Of Evoramonte perfectly represents the subtle changes in design and architecture over time. In somewhat more recent times, the castle served as the location for the signing of the Concession of Evoramonte which ended the Liberal Wars in 1834. Renovations of the grounds began in 1930 and were finally finished by 1987, when electricity was at long last installed. 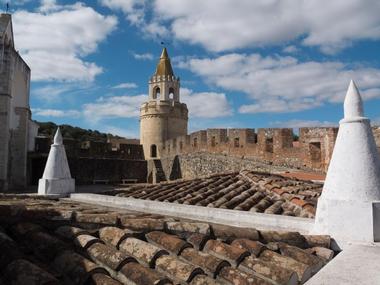 The castle of Viana de Alentejo was designed in the early thirteenth century. It features a distinctive irregular pentagonal wall with cylindrical towers at each point. The ancient cross of Viana do Alentejo sits roughly the center point. The fortified castle was created with a plethora of gothic themes and inspirations, including a wide gothic-style arch and, later on in its lifetime in 1521, a parochial church of Manueline style was erected by master craftsman, Diogo de Arruda, within the castle’s walls. Arruda also created the second church for the castle, the Church of the Misericórdia. The castle itself was then used as municipal offices until the late seventeenth century, at which point it was largely left alone until renovations began in the latter part of the twentieth century.