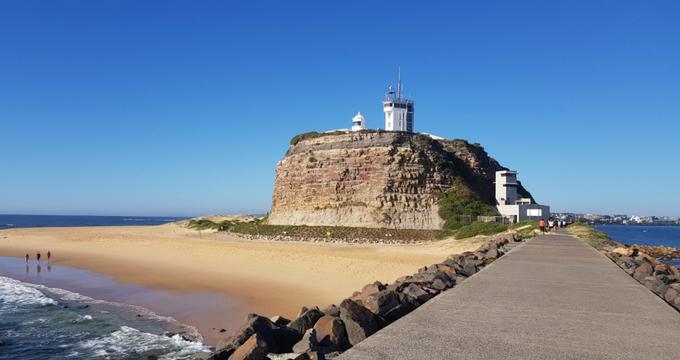 Newcastle is a city in New South Wales on the east coast of Australia. Like its namesake in the United Kingdom, it has rich coal deposits, and is the largest coal exporting harbor in the world. It was a penal settlement until 1822 and much of the city was built by convicts who had been sentenced to hard labor. Unfortunately, many of the structures were badly built and have not survived. Newcastle was considered to be of strategic importance in both world wars and was bombed in 1942. In 1989, an earthquake caused widespread destruction. The Hunter River flows into the sea at Newcastle and the city has several beaches, linked by the Bathers' Way. 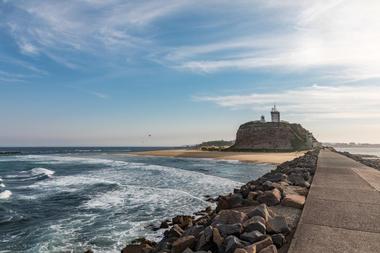 Nobby's Head is a beachhead at the southern end of Newcastle harbor. It was originally a small island, 62m high. The height caused ships entering the harbor to lose wind in their sails so the beachhead was reduced to 27m. The rocks that were removed were used to form a pier, a process that took 38 years to complete. A lighthouse was erected on the head in 1858 and has since been registered on the Commonwealth Heritage List. The pier was replaced with a breakwater which caused sea sand to shore up and form a beach. The beach is popular with bathers, surfers and strollers. Coffee shops provide refreshment on the esplanade. 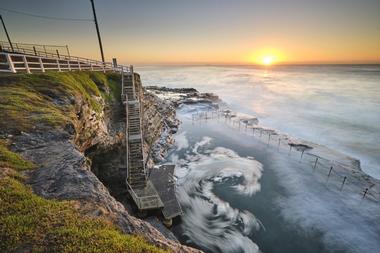 Bogey Hole is a purpose built ocean swimming pool. It is the oldest on the east coast of Australia. It was hand-cut by convicts in 1819 for the personal use of Major John Morriset, the longest serving commandant of Newcastle. The pool was later dubbed the Commandant's Baths. It is at the bottom of Shepherd's Hill and has been repeatedly damaged by falling rocks. The borough council enlarged the pool in 1863 and opened it to men only, except for specified times. In 1884 it was expanded to its present size. Bogey's Hole is listed on the New South Wales Heritage Register. 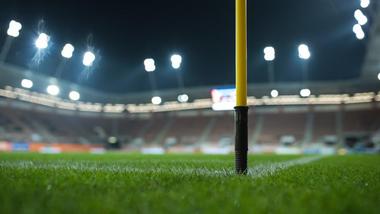 The stadium was opened in 1970 by Her Majesty, Queen Elizabeth II. It was formerly known as Hunter's stadium and was part of the International Sports Center. It has a seating capacity of 30000 and is the home ground of Newcastle Knights, a professional rugby league club, and Newcastle Jets Football Club. The stadium has hosted numerous international events including the opening ceremony of the 2013 Special Olympics. It was refurbished early in the 21st century. There are now 21 corporate suites, five function rooms and food and beverage outlets. The media center and players' changing room are world renowned and have won several building and construction awards. 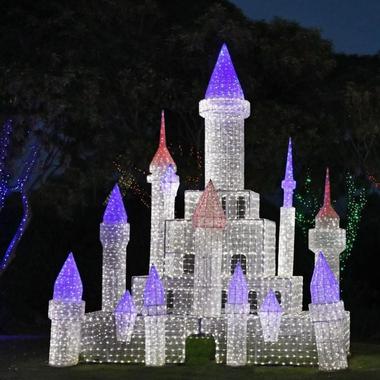 These gardens are 60 km inland from Newcastle. They were established by businessman, Bill Roche, in 2003. More than 40 landscape designers, gardeners, architects and engineered took four years to complete the project. There are ten thematic sections, modeled on gardens around the world. Six thousand trees, 600000 shrubs and over a million ground covers were used. Indigenous and exotic plants are complemented by statues, waterfalls, murals and other structures. A sculpture of Bill's wife, Imelda, and her grandchildren form the centerpiece in the rose garden. It is a popular venue for weddings. The Garden Terrace restaurant can seat 120 people. 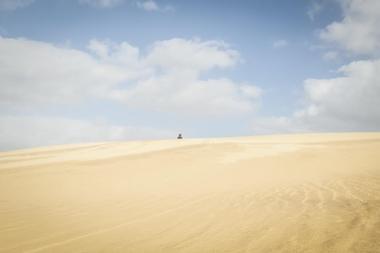 
Port Stephens is on the coast, 60 km north of Newcastle. It is an hour's flight from Melbourne and Brisbane and 2-3 hours' drive from Sydney. There are many attractions in the vicinity, warranting a stay of several days. To this end, the resort offers a range of accommodation, including backpackers, self-catering cabins, bed and breakfasts and hotels. Sand dunes and long stretches of coastline offer miles of scenic walks and safe beaches for bathing and riding horses or camels. Whales and dolphins can be spotted not far from shore or viewed from close up on a cruise boat. 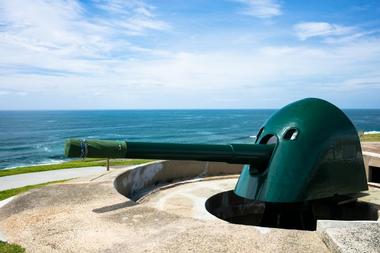 
This fort is located in the suburb of Newcastle East, on Flagstaff Hill, overlooking the Hunter River. Coal was discovered on the hill in the late 18th century and was exploited until the hill was claimed by the army in 1843. The fort was built as a coastal defense in 1882 and armed, in response to hostilities between England and Russia. The guns were only fired in anger in 1942 against the Japanese during the bombing of Newcastle. They are now used to salute departing cruise ships. The fort is an interactive museum. Volunteers offer guided tours above ground and through the extensive network of underground tunnels. 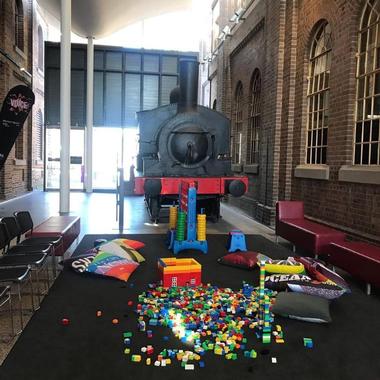 The museum was founded in 1988 as a major bicentennial project. It was housed in the Castlemaine Brewery until 2011 when it was relocated to the old Honeysuckle Railway workshops. The buildings that make up the complex have been listed with the National Trust. The 1880s Locomotive Boiler Shop now houses interactive science exhibits. The New Erecting Shop was built in the 1920s. Locomotives were disassembled and reassembled there when their parts needed to be sent away for repair. It was damaged in the 1989 earthquake and now houses the Fire and Earth exhibit. The Blacksmith Shop is an enclosed exhibition area and the Wheel Shop is a small theater. 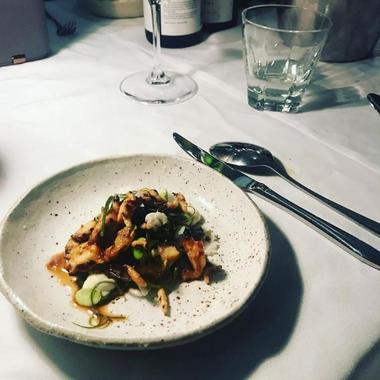 Subo is a contemporary bistro that serves Australian and international cuisine. Owner Beau Vincent started his cooking career at the age of 16 and in 2007 won the Lexus Australia's Young Chef of the Year award. His wife, Suzie, was also formally trained in the hospitality industry and is responsible for the front of house. They are both champions of small local producers. There are vegetarian, vegan and gluten-free options on the menu which is changed twice a season. Guests at private parties are served a 5 course set meal and are accommodated in the Glasshouse, which seats 18. 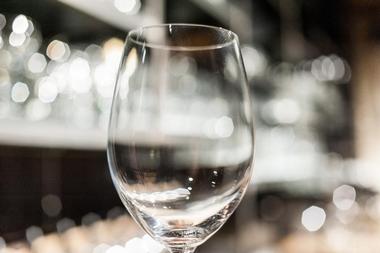 Scotties has been a feature of Newcastle East since the 1950s. At first, it was a corner store, then it grew to be a general store and, later, a fish and chip shop. It is now a small seafood trattoria and bar, within walking distance of Nobby's beach and Fort Scratchley. The restaurant serves fresh, local, line-caught fish and has a strong commitment to sustainability of the coastal fishing stock. It offers a healthier alternative to traditional dishes like fish and chips. Diners can eat indoors or al fresco, under the palms. There is also a takeout menu. 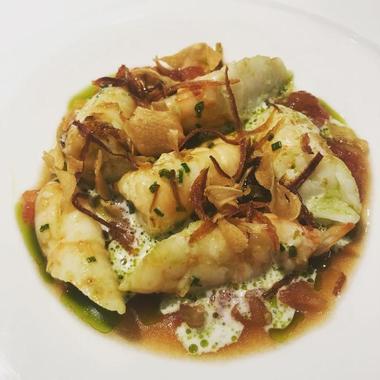 This restaurant was opened in 2011 by Chris Thornton and his wife, Ami, who both have extensive experience in the industry. They offer smart food in a relaxed atmosphere and have achieved a Chef's Hat rating in the Sydney Herald Good Food Guide. They have 5- and 7-course tasting menus and an a la carte menu, comprising seafood, meat dishes, vegetarian meals, desserts and a cheese selection. Patrons need to choose a minimum of two courses on weekdays and three over the weekend. In 2013 Restaurant Mason started a catering service for off-site functions such as corporate events, weddings and other special occasions. 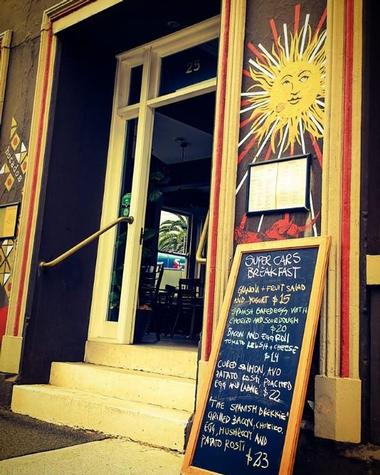 Bocados is located in the suburb of Newcastle East. It offers contemporary Spanish cuisine such as paella, tapas and shared plates. The restaurant specializes in catering on- and off-site and has several catering menus named after Spanish cities, for example, Barcelona, Sevilla and Madrid. The banquet room can seat 70 people. From Monday to Wednesday patrons may bring their own alcoholic beverages but the restaurant is licensed to sell beers, Spanish wines, sherries and sangria. Diners can choose indoor or outdoor seating and there is a takeout option. Bocados is open 7 days a week, from 5 pm till late. 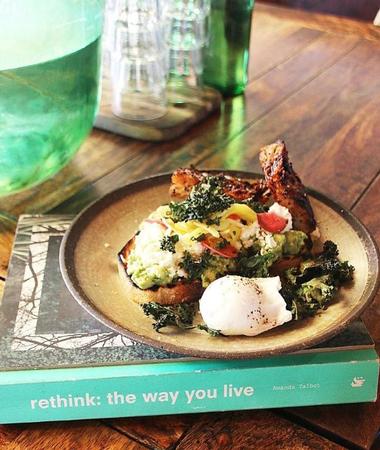 This is a family concern, located in The Junction, a large inner city commercial center, just outside the central business district and close to the railway hub. It is open from 06:30 to 14:30 and seating is available indoors and out. There are vegan, vegetarian and gluten-free options on the menus and many meals can be converted. The venue is popular for office parties, weddings and other functions. Talulah schedules events such as fundraisers and men only evenings. They offer birthday specials and discounts for repeat customers. 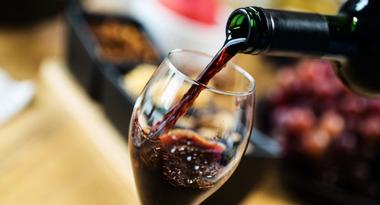 This relatively new restaurant has an industrial look and specializes in barbecued meals. The Churasco set menu offers a range of chargrilled meats. It is available for dinner from Thursday to Sunday. Other options include taste platters, shared meals, a vegetarian menu and desserts. The bottomless brunch is a once-a-month event. Diners can book the Chef's Table, a bespoke farm-to-fork dinner in a private dining area. There is a MEET food truck, equipped with barbecue and pit smoker, that is used for off-site catering, subject to a minimum of 60 people. The rustic feast includes meat platters, salads and sundry side dishes. 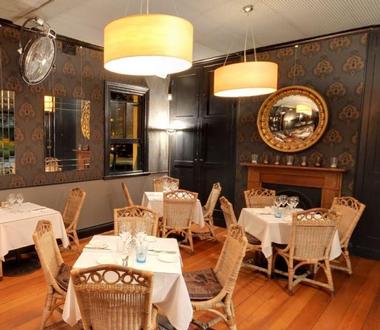 The double-story Georgian building which houses this restaurant was once the wharfinger's headquarters and then the paymaster's office for railway workers in historic Newcastle East. It was listed as an item of Regional Heritage Significance in 1987. The bricks were made by convicts and have been exposed in parts of the building. It is adjacent to the former Convict Lumber Yard which later became the Convict Stockade Site. The restaurant has a la carte and vegetarian menus and offers special weekend breakfasts. They cater for functions with shared plates, finger food and set menus. There is seating indoors and outside, overlooking the harbor. 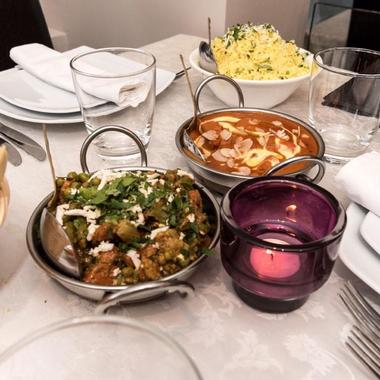 Among its many awards, this restaurant won the Readers' Choice in the Australian Good Food Guide in 2019. Sapphire serves authentic Indian cuisine and is located between Merewether and Adamstown. There are vegetarian, seafood, poultry, goat and other meat entrees on the menu as well as a variety of biryanis. Naan bread, pappadams or rotis accompany each meal and sambals, pickles and chutneys are standard condiments. Most meals are gluten-free. The restaurant is fully licensed to sell beer, wine and spirits. They can cater for functions from 20-55 people. Delivery and takeouts are additional options.

25 Best Things to Do in Byron Bay, Australia