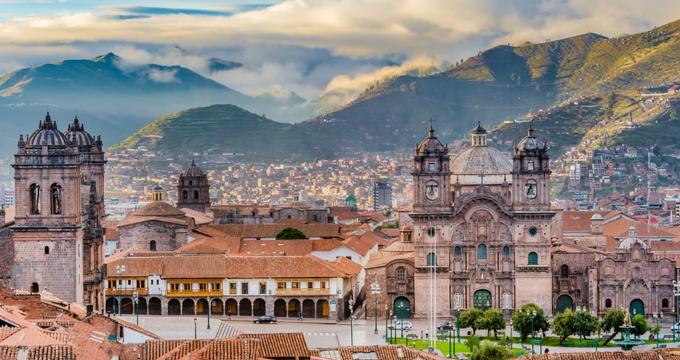 Located in the Peruvian Andes, the elevation of Cusco is about 11,150 feet, Knowing that the Altitude sickness starts affecting people even at much lower heights, you might think that’s it would be better to stay away from Cusco on your Peru adventure. But, if you decide to do so, you’ll miss out a lot. Cusco is a city that’s definitely worth paying a visit.

The main reason is history. There are impressive archaeological remains to be found at almost every corner. This shouldn’t surprise you much, knowing that Cusco used to be the capital of the Inca Empire.

Apart from the Incan architecture, this city has plenty of buildings from the glory days of the Spanish empire. The examples of Spanish colonial architecture are to be found all around the city, although most of them are located in the old city, the so-called Centro Historico.

Even if you’re not a history buff, you’re guaranteed to fall in love with this city. However, getting there might be a problem, especially if you’re coming from abroad. The easiest way is to make Peru’s capital, the city called Lima, your starting point. Here are some ways to get easily from one place to the other.

Flying from Lima to Cusco

By far the fastest way to get from Lima to Cusco is by plane. The flights usually take just over one hour. In fact, most of the flights available on SkyScanner take approximately 1h 10m. Apart from being relatively quick, this method is also pretty affordable.

Actually, this is one of the cheapest ways to get from one place to the other. A one-way ticket costs only about 55 dollars. We say “only” because the flight covers a distance of about 350 miles.

The best thing, though, is that there are lots of flights available every day. According to Google Flights, there are usually between 40 and 43 flights connecting Lima in Cusco on a daily basis. This means that there is a flight almost every half an hour.

A large number of flights is not a big surprise, considering that there are many airlines that operate between these two cities. Peruvian Airlines, Viva Air Peru, Avianca Avianca, LATAM, Star Peru, and LC Perú, are some of them.

Each of the flights starts at the largest airport in Lima, the Jorge Chávez International Airport, which is some 7 miles away from the city center. There is a line of public transport taking passengers there, but most people still prefer using a taxi or a van. What this means is that you got to add the airport shuttle into your expenses list.

Your plane will land at the Alejandro Velasco Astete International Airport, which is located just a few miles away from the city center. Because it’s not a long distance, you can get there by taxi or public transport, or even go by walk if you’re up for a little bit of exercise. But, if the latter is your choice, know that you won’t see too many historic building along the way. Most of them are situated in the Centro Histórico area of the city.

From Lima to Cusco by Bus

Traveling by bus is a very cheap way to get from Lima to Cusco, but we must warn you, it takes a lot of time. In fact, sometimes the trip can take up to 22 hours. Depending on the bus company, your trip can become pretty uncomfortable. Some buses don’t feature a toilet and toilet stops are made every couple of hours. Furthermore, many of them are old, with loud and smelly engines.

Surely, there are some companies that pay good care of their customers. Tepsa and Eclusiva are some of them, but they’re a bit more expensive. For a one-way ticket, you will have to pay between 30 and 35 US dollars.

You may think that a better solution would be getting car rather than bus. It might be faster, but the route seems pretty dangerous. You’re going up the Andes, after all, covering a distance of nearly 700 miles.

But, if you’ve already set your mind on a road trip through Peruvian countryside, you can rent a car at pretty reasonable rates. At the moment, there are lots of rent-a-car deals available at Kayak.com, some of which seem extremely affordable, as low as 9 bucks a day. To put it in perspective, the car rental price in California is at least 2 or 3 times as much.

The shortest and the safest route is the one that takes you along the Pacific coast via the Carretera Panamericana a.k.a. the Peru Highway 1. When your reach Nazca, it’s time to the Route 30A, followed by Route 3S until you reach your final destination.

But, before you do that, why not take some time to visit Nazca, the place where the famous Nazca Lines are located. Actually, there are a few more spots you may want to visit along the way, including the national park Pampa Galeras – Barbara D’Achille, Ampay National Sanctuary, and so on.

The good thing about driving from Lima to Cusco is not only that you’ll have a chance to explore the Peruvian countryside, but also because you will save lots of time. At least, you’ll save more time than if you decide to go by bus. If Google is to be believed, going by car will save you about 3-6 hours.

What this means is that if you rent an average family car, you will have to spend about 80 bucks to get from Lima to Cusco by car.