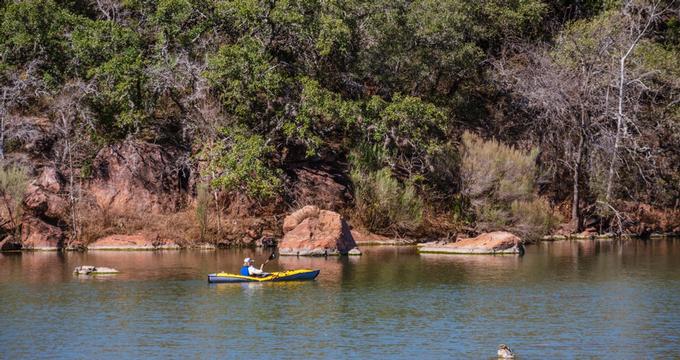 Burnet is a small country town in central Texas, known as the Bluebonnet Capital of Texas. It’s a short one hour drive from Austin. What makes Burnet a popular tourist destination and vacation spot are its lakes. It has some of the most beautiful lakes in Texas, including Lake Buchanan, Lake LBJ, and Inks Lake. Burnet is also recognized for its numerous golfing, fishing, boating, and camping activities. There are several cabins to rent along the lakes, along with RV parks and campsites. Other recreational activities include visiting one of the local wineries, making a trip to the state parks, Falkenstein Castle, and commemorative museums. CDC information for travelers. Hours/availability may have changed. 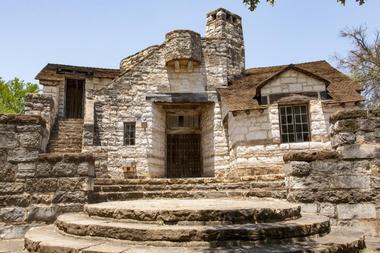 Longhorn Cavern State Park is a state park and a limestone cave that was formed by a underground river thousands of years ago. Although the cave is a tourist attraction today, in previous history, it was used by Native Americans, outlaws, and Confederate soldiers. Also, it was a popular speakeasy in the 1920s were artists and musicians came to perform. By November 1933, it officially became Longhorn Cavern State Park. Then, the cave was further excavated to make room for stairs and walkways inside the tavern. In 2006, musical concert series were reintroduced and in 2008, Redneck Jedi recorded their fifth album here. 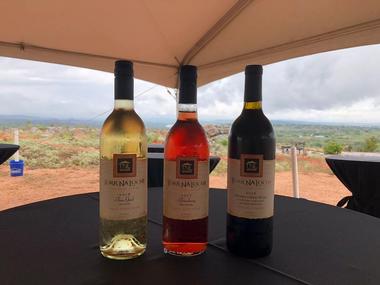 Blake and Karen DeBerry bought a 180-acre ranch in Burnet while living in Scotland. Years later they took a trip to Australia, and had the idea to turn their property into a winery. They wanted to give their winery a Scottish name, so they called it Torr Na Lochs, roughly translating to ‘Hill Over Lakes.’ After a few years of dedicated preparation of the land, the DeBerry’s completed their winery and tasting room, which opened in the fall of 2015. While visiting the winery, guests can sip their wine from various vantage points that showcase views of the Texas Hill Country.

Perissos is a Greek word that means to exceed beyond what’s expected, or hoped for. With the name chosen, the owners set out to create a 16-acre vineyard in the heart of Texas Hill Country. The soil used to grow their grapes is decomposed granite soil, which helps ripen grapes more effectively than other soils. Each year, the soil is restored in a sustainable way using organic composts and mulches. There are 13 different varieties of grapes grow on the vineyard to create wines. The majority of wines served and sold here include, Malbec, Petite Sirah, Tempranillo, and Viognier. 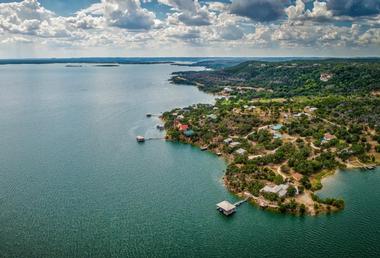 Lake Buchanan was created to supply water to the region and provide hydroelectric power. Buchanan was the first and is the largest of the Texas Highland Lakes. It has 22,333 acres, or 35 square miles of surface water. Several species of fish live in the lake and were brought there to improve the reservoir for recreational fishing. The types of fish in Lake Buchanan include largemouth bass, catfish, striped and white bass. Many homes and cottages surround the lake and get rented by tourists and locals alike. There are three parks on the lake and private marinas that provide boating access to the lake.


Named after Lyndon B. Johnson, Lake LBJ is a reservoir on the Colorado River. During the construction of Granite Shoals Dam, this lake was formed in 1950. Those who like to fish recreationally will find catfish, crappie, largemouth bass, and white bass in this lake. Much of the property that borders the lake is privately owned. Next to it is the Nightengale Archaeological Center at Kingsland. It’s an educational park that the Lower Colorado River Authority operates. Lake LBJ is largely known for its ideal conditions for water sports, especially boating, water skiing, paddle boarding, and more. 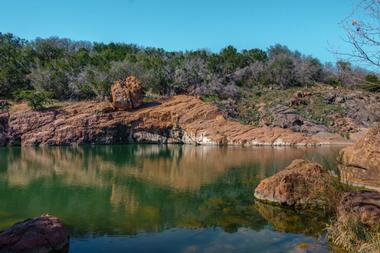 
Inks Lake is a reservoir in the Texas Hill Country that was formed in 1938 by the construction of Inks Dam. It was named after Roy B. Inks, an original board member for the Lower Colorado River Authority. The lake provides flood control and features a small hydroelectric power plant. For recreational uses, Inks Lake is best suited for swimming, fishing, boating, and camping. Adjacent to the lake is Inks Lake State Park. Visitors of the park come here to backpack, golf, or park their boats. One activity that adventure enthusiasts might like is cliff jumping at the "Devil's Water Hole."

Falkenstein Castle is a public venue and the private residence of Terry and Kim Young. While taking a trip to visit the Neuschwanstein Castle in Bavaria, Germany the Young’s learned about plans of another castle, named “Falkenstein.” Although the castle was never built, the Young’s were able to track down the sketches and plans from artist, Christian Janks. Using these renderings as inspiration, they decided to build a castle of their own in Burnet. The castle itself covers four-acres of land, and sits on a 113-acre property. In addition to the Young’s residence, the castle is a venue for weddings and charitable events.

Hill Country Motorheads is a vintage motorcycle museum owned by Pat and Janell Hanlon. On display are street bikes, drag racers, choppers, motocrossers, and other vintage motorcycles and memorabilia. Most of the 200 plus motorcycles in the collection originate from the 1960’s and 1970’s. Furthermore, the Hill Country Motorheads museum features over 70 bikes of various brands from all over the world. Even more, a few bikes on display are older than the 60s generation bikes. Besides walking through the 7,000 square foot museum, visitors can play pool, enjoy some snacks, watch TV on the big screen, or relax in the lounge.

Ritzy Texan is a family run business with two husband and wife couples, the Denison’s and the Holt’s. The idea for the Ritzy Texan was to market one-of-a-kind, handmade products at the “First Monday Trade Days” in Canton, TX. During this time, their most popular items were the decorated memory boxes and insulated bread bags. After appearing at this event and other community events, they grew large enough to open a permanent store. And on August 3, 2018, the owners announced the opening of The Ritzy Texan. The store offers a collection of home decor and gift items, along with original art pieces from more than 25 artists and craftsmen.

Highland Lakes Squadron of the Commemorative Air Force is a museum that opened in April of 1992. The man credited as the founder is Col Harold Smith. Inside the museum are artifacts donated from various sources. Many of the artifacts on display come from residents of the local Burnet and Marble Falls area. Some of these artifacts originated from pilots, gunners, engineers, and co-pilots who served in New Guinea, WWII, and went on missions over occupied Europe. There’s also a WWII gun and knife collection that was originally assembled by Col Bill Pair. Today, volunteers maintain and operate the museum for visitors.

10 Best Things to Do in Killeen, TX