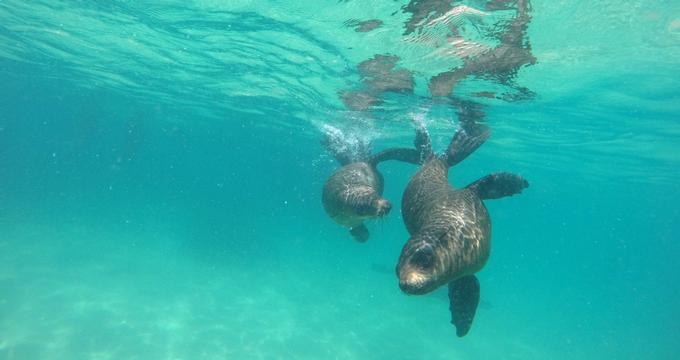 The Oregon Coast Aquarium was incorporated as a nonprofit organization in 1984, and over the course of the late 1980s and early 1990s, more than $11 million in fundraising efforts was collected. A 23-acre lot along Yaquina Bay was secured for the aquarium’s location in 1990, and the architectural firms of SRG Architects, Portland: BIOS, Inc., and Walker/Macy Landscape Architects were chosen to create a design for the new aquarium building. Construction on the facility’s first phase began in August of 1990, with the aquarium opening to the public two years later. Throughout the 1990s, the aquarium was best known as the home of Keiko the killer whale, the star of the feature film Free Willy.

Today, the Oregon Coast Aquarium is operated as a 501(c)(3) nonprofit organization, striving to engage visitors with the aquatic world and the marine sciences and inspire ocean ecosystem conservation. More than 450,000 annual visitors attend the aquarium’s exhibits, wildlife collections, and educational programming. As an American Zoos and Aquariums Association accredited facility, the aquarium has been ranked as one of the top aquariums in North America by publications such as USA Today and Coastal Living magazine.

Three permanent exhibit areas are showcased at the aquarium, along with a gallery for rotating temporary exhibits. In the Sandy Shores exhibit, fish and invertebrates living in shore and bay environments are explored, including species native to the Yaquina Bay area. A freestanding pier piling habitat is showcased within a 4,730-gallon tank, while other exhibit areas display species within tide pool environments, including anemones, oysters, and sculpins. An Ocean Today kiosk within the exhibit, operated in conjunction with the National Oceanic and Atmospheric Administration, also provides real-time weather and conservation information from around the world.

The Rocky Shores gallery focuses on the unique cliff coastline of the Oregon Coast, centered around a touch tide pool filled with anemones, sea stars, and gumboot chitons. A tidepool cutaway exhibit allows visitors to explore the environmental adaptations and features of coastal and intertidal animals, and a deep pool camera feed allows for close-up investigation of deep water ecosystems. Within the Coastal Waters gallery, a 35,000-gallon tank extends into the aquarium’s courtyard area, replicating the environment of the Yaquina Bay’s jetty ecosystems. Salmon, white sturgeon, and moon jellyfish are showcased, along with a 5,000-gallon kelp forest and a coastal reef exhibit area. Past temporary exhibits on display within the rotating gallery area have included the Oddwater exhibit, focusing on unusual sea species, and Secrets of Shipwrecks, taking visitors on an underwater journey to explore the artifacts and developing ecosystems of wrecked ships.

A Passages of the Deep acrylic tunnel exhibit, housed within Keiko’s former tank area, also allows visitors to walk through orford reef, halibut flats, and open sea areas. A number of outdoor exhibits are also featured, including a Seabird Aviary, the largest of its kind in North America, showcasing pigeon guillemots, black oystercatchers, and horned and tufted puffins. Seat otter, harbor seal, and sea lion exhibits are also featured, along with a tank containing a giant Pacific octopus and a nature trail overlooking the Yaquina Bay estuary. The aquarium’s grounds are housed on a renovated and reimagined former lumber mill site and serve as an exhibit within themselves, showcasing over 100 plant species denoted with placards and growing information.

In addition to standard admission, guided tours of the aquarium are offered for small groups and organizations, including curriculum-incorporated field trip opportunities for elementary and secondary school groups. A variety of on-site and outreach educational programming is offered for students, including on-site workshops as part of field trips, in-classroom outreach presentations and web-based distance learning opportunities, and professional development workshop opportunities for instructors. An Oceanscape Network web-based educational program for preteens and teenagers is also designed to help youth connect with science through the merger of nature and technology, allowing participants to virtually explore the ecosystems of the Oregon Coast, receive suggestions for in-person exploration experiences, and complete guided scientific inquiry projects of their own. Depending on individual school regulations, participants may receive high school course credit for completion of the program. A Sleep in the Deep overnight program is also offered for school groups and families, allowing participants to explore the aquarium after hours.

More Things to Do in Oregon