10 Best Things to Do in Tillamook, Oregon 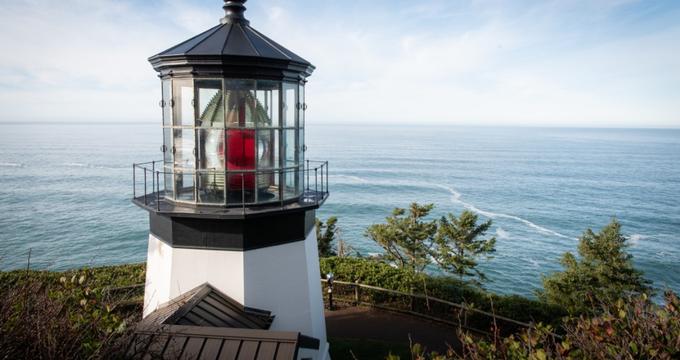 Tillamook is the delightful county seat of Tillamook County, Oregon, located along the southeastern edge of the Pacific Ocean's beautiful Tillamook Bay. The town, which is named for the region's indigenous Tillamook tribe, is best known as the home of the world-renowned Tillamook Cheese Factory, which offers guided and self-guided tours of its cheese-making facilities and operations throughout the year. The renowned Tillamook Air Museum showcases World War II-era aircraft and artifacts, while Cape Lookout State Park is home to gorgeous beachfront stretches and opportunities for hang gliding and paragliding. 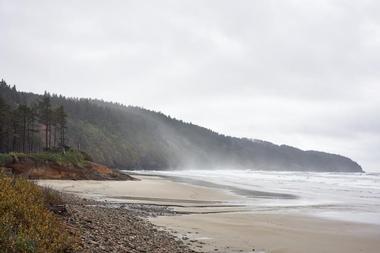 Cape Lookout State Park is a delightful state park located on Cape Lookout, along a sand spit between the Pacific Ocean and Netarts Bay. The park, which sits just south of the city of Tillamook, is home to some of the Pacific Northwest's most beautiful scenic panoramas, including picturesque waterfalls and Pacific Ocean views. A three-mile protected beachfront at Cape Lookout is protected by a 50-foot stone revetment, open to the public for beachcombing, hang gliding, and paragliding throughout the year. Over eight miles of hiking and walking trails meander throughout the park's lush old-growth forest areas, including the Cape Lookout Trail, which stretches for two miles along the park's headland. Over 200 tent and RV hookup sites are offered at the park's campground, along with rental cabins and Mongolian-style rental yurts.

-- You are reading "10 Best Things to Do in Tillamook, Oregon" Back to Top

Cape Meares Light is a preserved historic lighthouse located on Cape Meares near Tillamook Bay, open to the public as a living history museum. The lighthouse was originally constructed in 1890 and served as the primary light station for Tillamook Bay. At its construction, the light featured two keeper's houses, two oil houses, and two cisterns connected by a 1,000-foot boardwalk. After its deactivation in 1963, the light was nearly demolished by the United States Coast Guard, but citizen efforts resulted in its transfer to the Oregon State Parks Department. Since 1993, the lighthouse has been listed on the National Register of Historic Places. Visitors can explore the lighthouse as part of self-guided tours throughout the week.

-- You are reading "10 Best Things to Do in Tillamook, Oregon" Back to Top 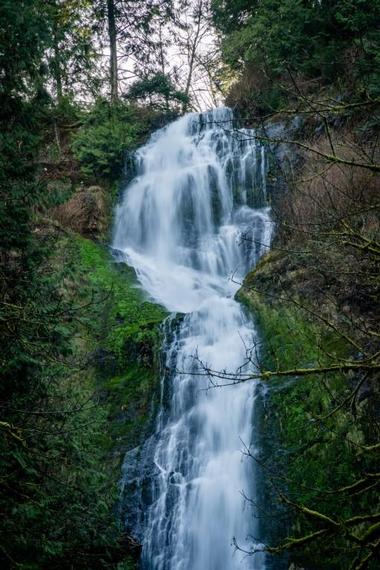 Munson Creek Falls State Natural Site is a lovely Oregon state park overseen by the Oregon Parks and Recreation Department, best known as the home of its namesake waterfall. The falls tumble over an impressive distance of 319 feet, the tallest waterfall of its kind in the Coast Range. Gorgeous ancient western red cedar and Sitka spruce trees dot the park's landscape, which also serves as an important salmon spawning hatchery for the Pacific Northwest area. A lovely trail meanders along Munson Creek, leading to panoramic views of the waterfall site. Natural landmarks include one of the nation's tallest remaining Sitka trees, which towers more than 260 feet above the park's landscape.

Tillamook Forest Center is a unique educational interpretive center located within the Tillamook State Forest, located just 22 miles east of the city of Tillamook along Oregon Highway 6. The center is the region's largest forest-based learning center and outdoor classroom, showcasing the legacy of the Tillamook Burn and the forest regions of the Pacific Northwest. Visitors can explore the center's hands-on exhibits or view periodic showings of the award-winning documentary Legacy of Fire throughout the day. Outside the center, visitors can climb a 40-foot replica of a forest fire lookout tower or travel along the center's 250-foot pedestrian suspension bridge, which connects to the nearby Wilson River Trail and Jones Creek Campground. Free annual programming can be scheduled for school, student, and community groups.

-- You are reading "Fun Things to Do in Tillamook, Oregon this Weekend with Friends" Back to Top


Tillamook Air Museum is a lovely aviation museum located just south of the city of Tillamook, housed within the former Hangar B United States Navy blimp hangar, the world's largest clear-span wooden structure. The museum was named as one of the nation's top collections of private World War II aircraft in 2004 by USA Today, showcasing collections curated by the Classic Aircraft Aviation Museum. Craft on display include a Douglas A-4B Skyhawk, a Mikoyan-Gurevich Mig-17F, an Bell TH-57 Sea Ranger, and a Cessna 180F Skywagon that was one of two light aircraft to first land at the North Pole. An exhibit hall showcases rare historical wartime and aviation artifacts, including preserved pieces of the famed German Hindenburg airship.

-- You are reading "What to Do in Tillamook, Oregon this Weekend" Back to Top 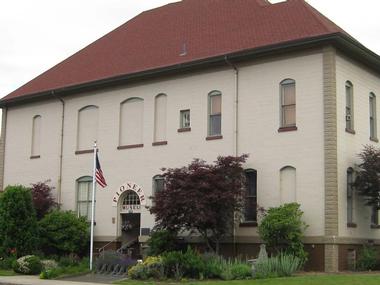 
Tillamook County Pioneer Museum is a charming city history museum detailing the historic past of Tillamook County from its pioneer era through the present day. The museum was founded in 1935 by the Tillamook County Pioneer Association and showcases a collection of over 55,000 items, along with an additional 20,000 photographs and pieces of ephemera. 19 gallery rooms showcase artifacts from the prehistoric era through the present day, including indigenous artifacts, military memorabilia, and items connected to the region's transportation, dairy, farming, and maritime industries. Visitors can tour the museum throughout the week and see permanent and rotating exhibits on display at galleries such as the special-exhibit Northwest Gallery.

-- You are reading "Top Romantic Tourist Attractions in Tillamook, Oregon" Back to Top 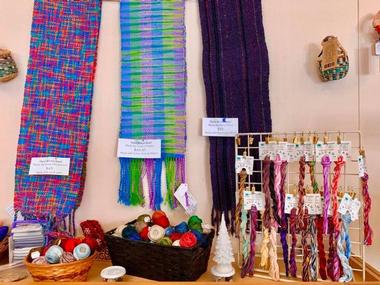 Latimer Quilt and Textile Center is a unique textile arts museum and center in Tillamook, located just off meandering Wilson River Loop Road. The center is housed within an abandoned schoolhouse building, which has been carefully preserved and restored to its historic condition. Stunning antique and modern quilts are showcased throughout the center, including pieces dating back as far as the 19th century. Textile tools are also on display, along with 1930s-era crochet work, antique clothing pieces, and handwoven textiles. Six rotating gallery exhibits are showcased each year, highlighting different aspects or eras of the textile industry. The center also hosts a wide variety of programming throughout the year, including weaving and spinning demonstrations and courses.

-- You are reading "What is There to Do with Kids in Tillamook, Oregon" Back to Top 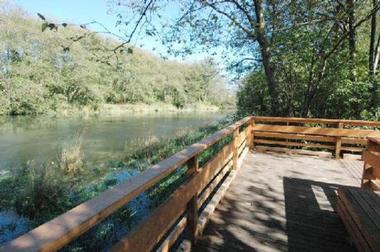 Just a stone’s throw from the heart of Tillamook’s downtown area is the Hoquarton Interpretative Trail. Also known as Hoquarton Landing, this interpretative trail educates its visitors about what was once a water route to the city – a water route that was used by fishing boats, passenger boats, and supply boats alike coming in from the Pacific Ocean. The Hoquarton Interpretive Trail also gives insight to the regions Tillamook Indian Tribe which worked the land and hunted for their food in the Hoquarton Slough. Renovated in 2018, the trail is now connected to Godspeed Park via a paved route that visitors can employ should they wish to take a walking tour of the city’s most popular parks and green spaces. 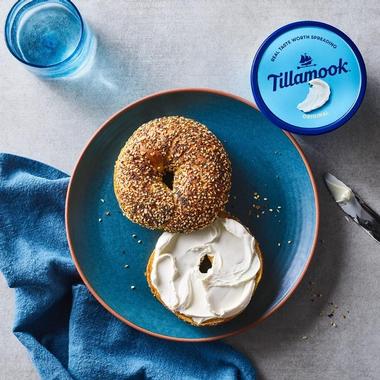 Housed in what can best be described as a modern barn, the Tillamook Creamery has been serving delicious ice cream to its guests from within its sunny and spacious building for many years now. However, the Tillamook Creamery’s values and beliefs can be traced back to 1909 when the Tillamook was dreamed to life by a family of farmers. Tillamook is undeniably known for the sweet treats with their ice cream and frozen custards being a true fan favorite. Tillamook also produces delicious yogurts, a decadent variety of cream cheeses, butter, hard cheeses, and several other dairy products. Be sure to stop by the Tillamook Creamery and the Tillamook Market to get a complete experience and to take home some of their mouthwatering offerings while you’re at it.

, Michigan beaches -- "Best Things to Do in Tillamook, Oregon for Locals & Tourists - Restaurants, Hotels" Back to Top 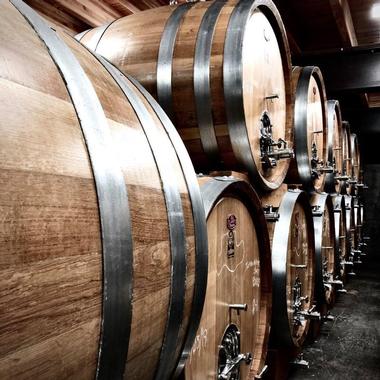 A unique brewery situated on the Oregon Coast, de Garde Brewing is known for its unique approach to craft beers which they’ve described as “drawing on historic traditions and local experimentation”. For those who don’t quite get it, de Garde Brewing never adds laboratory cultured yeast to their beers. Using naturally derived yeast, the brewery finishes their beers in oak barrels to complete the fermentation process which can take anywhere from 6 months to 5 long years. De Garde offers 8 beautiful bottles including the Premier Desay, the Nectarine Premiere, The Archer, and the Petria Reserve. Meanwhile, they also offer one kind of wine, an Oregon red wine called Rouge No. 1. The tasting room welcomes visitors from Thursday through Sunday to taste their flagship beers and bring bottles home.

10 Best Things to Do in Tillamook, Oregon

You are reading "10 Best Things to Do in Tillamook, Oregon " Back to Top

20 Best Things to Do in Carlton, Oregon

24 Best Things to Do in Hillsboro, Oregon

18 Best Things to Do in Grants Pass, Oregon

20 Best Things to Do in Florence, Oregon