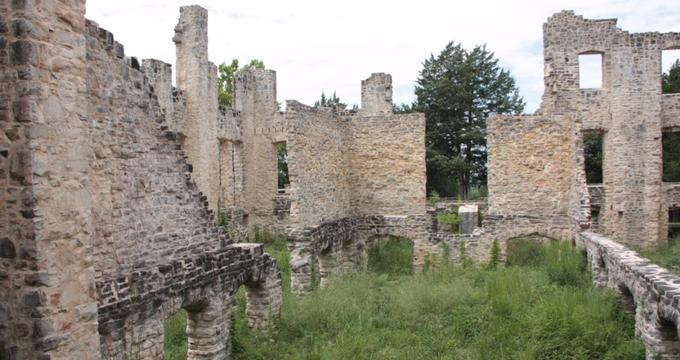 Camdenton came into being in the 1930s after the Osage River had been dammed and the Lake of the Ozarks formed. The 92 mile lake, made by the Bagnell dam, was the largest in the USA at the time and one of the largest in the world. It brought hydro electricity to the area and shortly afterwards tourists started arriving. There are now 70 000 homes on the lake, most of them vacation homes. Most of the 1150 km shoreline is privately owned. There are around 3 million visitors to the area each year. Certain attractions may be temporarily closed or require advance reservations. Hours/availability may have changed. 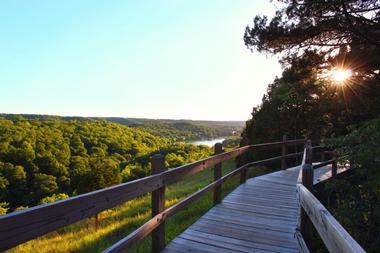 This 3700 acre state park is situated on the Lake of Ozarks. The main attraction is the ruin of an early 20th construction that was designed to look like a European castle. The businessman who conceived the plan named it after the bubbling water of the natural spring. The building has a sad history, ending in a fire in 1942. Fifteen kilometers of trails have been laid out on the land so visitors can see the sinkholes, caves, bluffs and natural bridges in the park. Boating, swimming and fishing are popular lakeside activities. A visitor center and outdoor interpretation area provide information on the various attractions and activities. 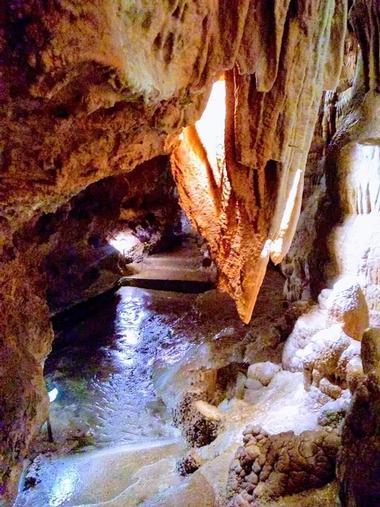 A story of a wedding in the early 1800s, as told by the Osage Native Americans that lived in the area, is the origin of the cave's name. Fittingly, it can be hired for weddings in the modern era and more than 3000 couples across the globe have done so. The area has been protected since 1948 but visitors are welcome. There are frequent guided tours through caves where many rock formations and the Mystery Lake can be seen. Outside of the cave, there are viewing decks, an observation tower, trails and picnic spots. Gems can be 'mined' in the souvenir shop.

You are reading "5 Best Things to Do in Camdenton, Missouri" Back to Top 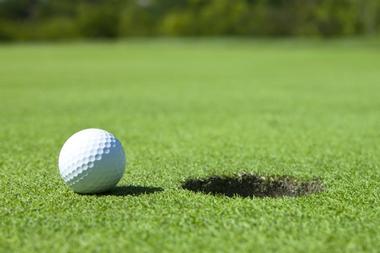 The golf course was commissioned in 1967 but torrential rain and the rocky terrain delayed construction and necessitated a change in design. Instead of being a par 70 course, it became a par 72. The early years were difficult financially but a volunteer spirit, donations and dues paid in advance helped the fledgling club to survive. Today there is a clubhouse, pro shop, restaurant, locker rooms, ablution facilities and a swimming pool. The golf course and the banquet hall in the clubhouse can be hired for group functions. Regular events ranging from Independence Day celebrations to trivia evenings are held at the club.

You are reading "5 Best Things to Do in Camdenton, Missouri" Back to Top 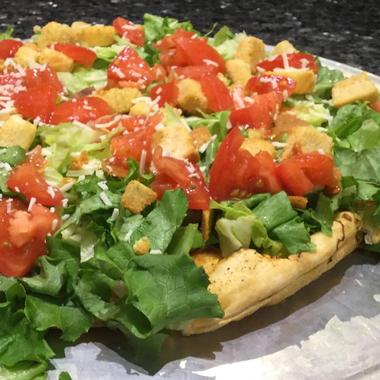 
Growing up in the Lake of Ozarks was sometimes lonely for Bill. Neighbors were far away so he spent time with his mother and grandmother in the kitchen and developed a love of cooking all the old family Italian dishes. He grew up to establish his own restaurant near where he grew up. It is small but expanding due to increased popularity. Pizzas are most popular, from the 10” Billy the Kid to the 16” Jumbo. There are also gluten-free options, including a cauliflower crust. Raviolis, insalatas and calzones are also crowd pleasers. The restaurant opens at 4 pm from Wednesdays to Sundays.

You are reading "5 Best Things to Do in Camdenton, Missouri" Back to Top or More must do for couples, what to do near me, places to visit this weekend 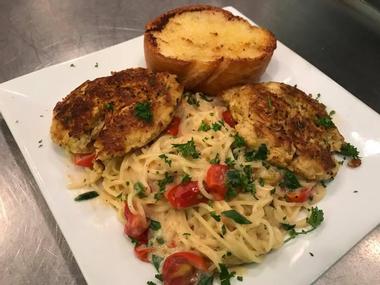 Randy Jung has been in the restaurant business for more than 40 years and attracts clients from 40 miles away. His family-friendly diner serves breakfasts and lunches. The food is home-cooked using fresh, local ingredients and the portions are huge. Specials change almost daily but some favorites remain, such as a short stack of pancakes, crispy French toast and Friday's fisherman's platter. There are a range of pies to choose from for dessert. RJs caters for special events and large groups. The restaurant is open 7 days a week from 6 am to 2 pm.

You are reading "5 Best Things to Do in Camdenton, Missouri" Back to Top or More tourism, attractions for couples, food, things to see near me today

Located near Camdenton, Missouri within the Lake of the Ozarks, Bridal Cave is a public show cave that is famous for its connection to an Osage indigenous legend and is operated today as a wedding venue and guided tour attraction.

Bridal Cave, which is located within the Lake of the Ozarks near the present-day city of Camdenton, Missouri, takes its name from an Osage indigenous legend connected to Wasena, the daughter of Elkhorn, the Chief of the Little Hills, who ruled an area within the region during the early 1800s. Conwee, the son of neighboring tribal leader Chief Neongo of the Big Hills, became obsessed with Wasena and desired to marry her, despite her and her father’s rebuttals. Conwee and a party of his tribal peers kidnapped Wasena and her companion, Irona, from their village and held them captive within what is now referred to as Bridal Cave. Wasena was able to elude her captors and committed suicide by jumping from a nearby 200-foot cliff over the Niangua River, which is referred to today as Lover’s Leap. Following the tragedy, Irona and her longtime partner in secret, Prince Buffalo, who was the brother of Conwee, were married within a room in the cave known as Bridal Chapel, in order to pay honor to the late Wasena. Today, the cave is known as Bridal Cave in honor of Irona and Prince Buffalo’s wedding. In 1948, the cave was protected for future preservation and opened to the public, and the following year, the first couple was married within its Bridal Chapel room. Since 1949, more than 3,000 weddings have been held within the cave.

Today, Bridal Cave is open to the public as a show cave, offering guided tours for visitors of all ages. The cave is operated year-round, with the exception of major national holidays, and is considered to be one of the most scenic caves in the United States. Admission rates are offered for adults and youth, with children ages four and under admitted free with paying adult admission.

Guided tours of the cave are offered daily, lasting approximately 60 minutes and showcasing the cave’s natural wonders. The cave is kept at a year-round temperature of 60 degrees Fahrenheit and features a variety of walkways showcasing giant columns, draperies, soda straws, and other mineral formations, including the most onyx formations within any known cave in the world. 75-minute special Lantern Tours are also offered on Saturday evenings throughout the summer months, showcasing the cave’s sights by handheld lantern light and offering souvenir LED lanterns and caver’s helmets for tour participants.

More than 3,000 weddings have been performed at Bridal Cave since its 1949 public opening. Today, the cave has been named as one of the top 10 most unique wedding venues in the United States by Glamour magazine and is available for year-round wedding rental. Weddings may be performed within the cave’s Bridal Chapel area or in an outdoor pavilion overlooking the nearby Lake of the Ozarks. Up to 50 guests may be accommodated within the Bridal Chapel, with space for up to 80 seated guests within the pavilion. All visitors wishing to have their wedding at the cave must have a valid Missouri marriage license, and all weddings performed at the venue are open to the public if scheduled during normal operational hours. Information about local floral, photography, hotel, and catering services are available upon request.

In addition to cave attractions, a variety of family-friendly activities are offered near the cave, including a Thunder Mountain Mining Company gemstone mining attraction for young visitors to pan through cave dirt for gemstones and fossils. Visitors may keep any semi-precious minerals or fossils that they find, and gemstone panning activities may be added to group tours for an additional fee. Additional attractions include a public boat dock and observation tower, lakeside viewing decks, nature trails, and a snack center and gift shop.

In addition to standard visitor admission, guided group tours are available for small groups and organizations, including curriculum-incorporated field trips for elementary and secondary school groups. Groups of 15 or more participants may schedule guided tour reservations via phone or on the cave’s website. A lakeside picnic pavilion is offered for group use, seating up to 80 people. Add-on packages for gemstone mining activities at the Thunder Mountain Mining Company may be added to group tours for an additional fee. Special Discovery Tour packages are also available, offering exploration of Bridal Cave, a flashlight tour of nearby Bear Cave, and a half-mile nature walk with two outdoor classroom activities along the northern slopes of Thunder Mountain Park. Programs are geared toward appreciation of cave geology and natural cave and Ozark Mountain ecology. All tour participants receive a free flashlight souvenir to take home after the tour.

You are reading "5 Best Things to Do in Camdenton, Missouri " Back to Top

8 Best Things to Do in Hermann, Missouri

25 Best Things to Do in Springfield, Missouri