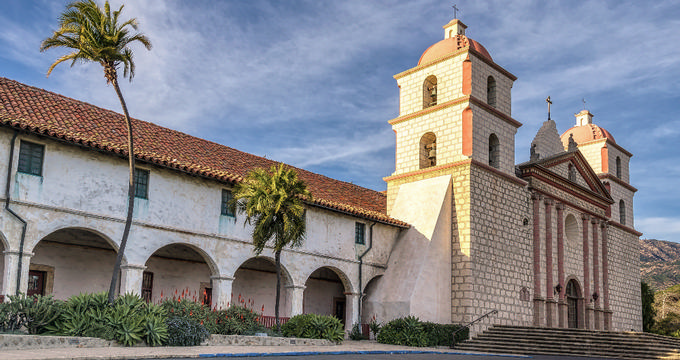 Santa Barbara, California offers a number of free things to do for visitors of any age, such as beaches, parks and museums. For those who love the outdoors, the many parks and beaches are certainly highlights of the area, such as the popular Santa Claus Beach or Alameda Park with its elaborate wooden playground. 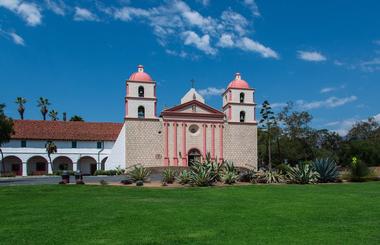 The Old Mission Santa Barbara is located on thirteen acres that overlook the Pacific Ocean. The grounds of the mission consist of a stunning Mission church, the nine-room museum featuring a variety of historical artifacts and artwork, and the Historic Cemetery and Mausoleum. There are also several lush gardens, such as the La Huerta Historical Garden featuring ancient and authentic trees and plants from the Mission era. Visitors can explore the spectacular architecture of the facade of the church, as well as take in the colonial-era sculptures and art of the beautiful Mission church of the historic Santa Barbara site. 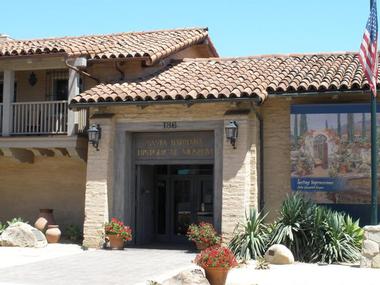 The Santa Barbara Historical Museum celebrates the history of the Santa Barbara community, dating back to the Chumash up through modern day through compelling programs and vibrant exhibits, all conveniently situated in the historic heart of downtown Santa Barbara. The museum is open to visitors on Tuesdays from noon until 5:00pm and from Tuesday through Saturday from 10:00am until 5:00pm. It is closed on Mondays and major holidays. Visitors can learn about the area’s glamorous film era, pioneering aviators, and the legendary Fiesta festival, along with many events that occured before the twentieth century. 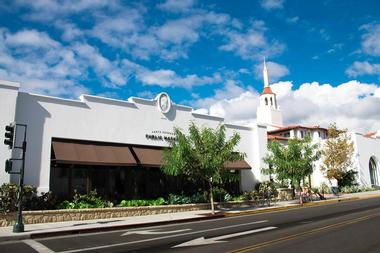 , OH -- You are reading "20 Best Free & Affordable Attractions in Santa Barbara" Back to Top 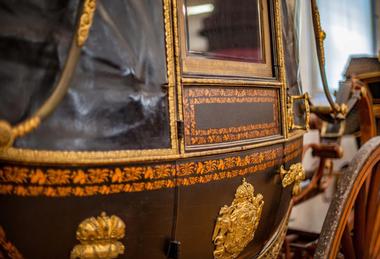 
The city of Santa Barbara is among the most historic and authentic destinations for tourists maintaining its Spanish roots from back to the Mission Days. These roots are showcases during the Old Spanish Days Fiesta, a festive celebration held every year during the summer season. The annual event draws in loyal and large crowds to the city each and every year to celebrate the traditions and heritage of Santa Barbara. The Old Spanish Days Fiesta is typically held the first few days of August and features a variety of fun and entertaining activities, such as parades, dancing, amazing food, and more. 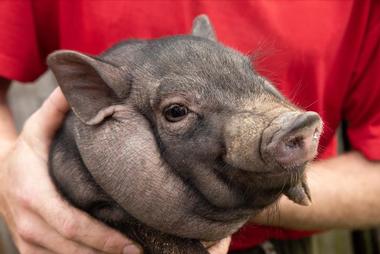 
The Lil’ Orphan Hammies Potbellied & Miniature Pig Rescue & Sanctuary was founded in 1992 by Susan Parkinson as a rescue home for any unwanted Potbellied pigs. This sanctuary for pigs was created in response to the “pet pig craze” that started during the late 1980’s and resulted in a large number of abandoned pigs. Lil’ Orphan Hammies became a busy non-profit organization by 1994, taking care of up to 100 pigs at any given time. The sanctuary spans across five acres and features unique housing and well-fenced, spacious enclosures for pigs to nap under trees or in hay or play outdoors. 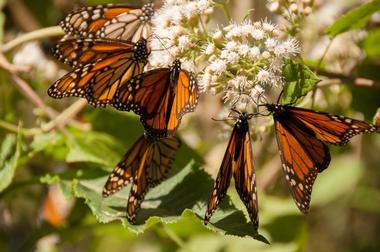 The Coronado Butterfly Preserve is located near Santa Barbara in Goleta, California. The grounds are home to eucalyptus grover, a habitat of native coastal sage scrub, and many birds and other wildlife that live in the urban community gem. The preserve encompasses 9.3 acres and consists of meadows, woodlands, and the Devereux Creek, along with several trails and an outdoor classroom and gathering area. While there is no admission fee to visit the Coronado Butterfly Preserve, donations are appreciated to help keep the preserve open. It is open every day, year-round, from sunrise to sunset. The Fernald Mansion is an excellent example of the architectural style of Victorian Queen Anne in Santa Barbara, California. The home is the former residence of Charles Fernald. Fernald was one of the most prominent figures of the city as an attorney, sheriff, and even mayor during the latter part of the nineteenth century. The mansion, along with a number of the original furnishings, was kept from being demolished and moved to the current site in 1959 by the Santa Barbara Historical Museum and is open today for public tours. The home of Charles Fernald was originally located at 422 Santa Barbara Street. 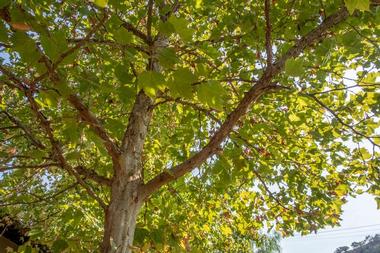 Alameda Park is one of Santa Barbara’s oldest parks. A two-block city park, Alameda includes drop-in and reservable picnic areas, a bandstand, restrooms, rare unique trees, and the Kid’s World, which is a playground spanning eight thousand square feet that features two party sites that can be reserved, slides, swings, and a castle. Kid’s World is one of the city’s most popular and largest playgrounds. The various sections of the Kid’s World playground are designed for kids ages two to twelve. Alameda Park is the site of many celebrations in the city, such as the Summer Solstice event. 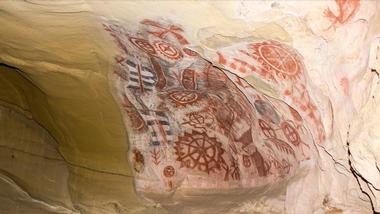 The Chumash Painted Cave State Historic Park is home to a small cave with walls carved out of towering sandstone boulders and featuring some of the best examples of remaining rock art created by the Chumash Native Americans. After parking, visitors can take a look at the historical sign and begin climbing around a dozen stairs up to the small cave. This cave is gated shut in order to protect the cave and the art inside. Two holes are present in the barrier, one for adults and one for kids, to give guests a good opportunity to view the cave or take photographs. Visitors can enjoy the sounds and sights of the sea at the Stearns Wharf, which is one of the most iconic landmarks in Santa Barbara. Situated at the end of the city’s State Street, the wharf is named after builder John Stearns and is the oldest working wharf in the state of California. It is also a good place to take in amazing views of the blue Pacific Ocean, enjoy salty breezes, and soak up the sunlight. Stearns Wharf is also the home of the city’s famous boardwalk with unique shops, handmade ice cream, and boat rides among many other attractions. 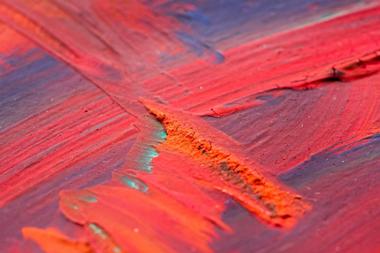 The Sunday Arts and Crafts Show of Santa Barbara is one of the city’s pieces of living history and highlights the creative talents of many of the area’s local artisans. The arts and crafts show takes over Cabrillo Boulevard from Calle Cesar Chavez to Stearns Wharf. Every Sunday throughout the year, as well as on Saturdays during major holiday weekends, around two hundred artists of Santa Barbara County showcase their original work in a setting that encourages people to talk with the many artists and maybe see them actually creating artwork. 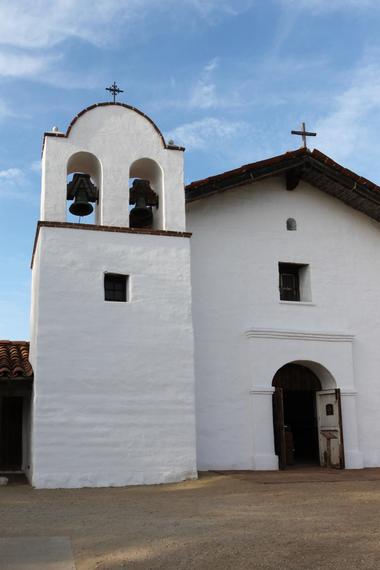 El Presidio de Santa Barbara State Historic Park is surrounded by the bustling city of Santa Barbara and is where the last remaining of the military outposts constructed by the Spanish along the Alta California coast. Tow of the original presidio buildings have been restored, while other buildings have instead been reconstructed. Established on April 21 of 1782, the Santa Barbara Presidio was one of four presidios built by the Spanish, with the other three in Monterey, San Francisco, and San Diego. El Cuartel is the oldest building in Santa Barbara and California’s second oldest building. 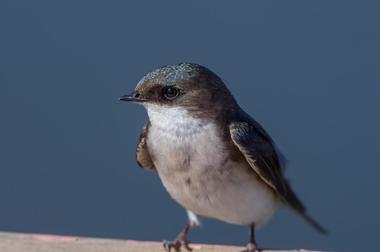 The Andree Clark Bird Refuge is an open space park encompassing forty-two acres, including a lake spanning across twenty-nine acres that is actually an artificially modified estuary to support the brackish wetlands. There are three island found throughout the lake. The Andree Clark Bird Refuge offers several relaxing outdoor recreational activities, such as biking, hiking, and bird watching. Visitors should keep in mind that fishing, boating, and feeding the wildlife are prohibited. Guests can take in views from scenic highways and see terrestrial and aquatic habitats. There is a bike path that travels around the lake as well. 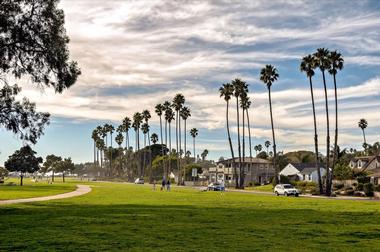 Shoreline Park is a 14.6-acre popular park along the coastal bluff in Santa Barbara, just west from the Leadbetter Beach. Amenities in the park include a group area for picnics, two restrooms, a playground, stairs to the beach access, park benches, sidewalks, and barbecue grills and individual picnic tables. Visitors can also enjoy sweeping views from the park of the coastline, the Santa Ynez Mountains, and the surrounding City of Santa Barbara. Visitors can also possibly have a chance to see whales from the Shoreline Park. Children love the playground and it’s a good spot for family picnics. 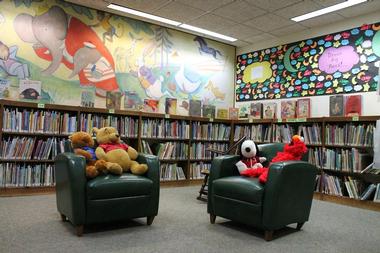 The Santa Barbara Public Library is part of the City of Santa Barbara’s public library system and one of the easily free things to do in Santa Barbara, California. In addition to books and other activities at the library, visitors may also have the opportunity to explore art exhibits at the Central Library of Santa Barbara. 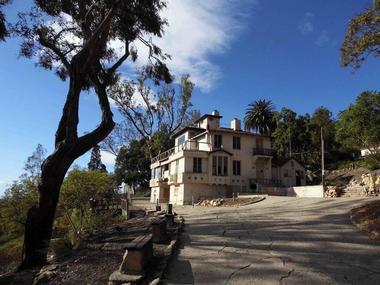 The American Riviera Franceschi Park is the former estate of Francesco Franceschi, a famed botanist, and offers panoramic views of Santa Barbara and its great setting. In addition to being a green space for visitors and locals to relax, Franceschi Park is also a peaceful resource for horticulture in the community where Dr. Franceschi’s pioneering work is continued and honored. The American Riviera Franceschi Park promotes horticultural education, encourages passive recreation, and celebrates the aesthetics of the landscape of the Mediterranean climate. Franceschi imported more than nine hundred plant species to the climate of Santa Barbara from 1894 to 1913. 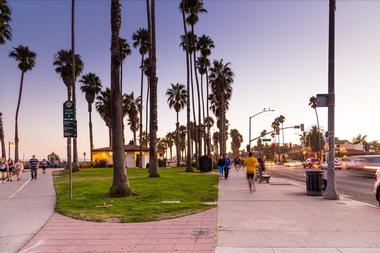 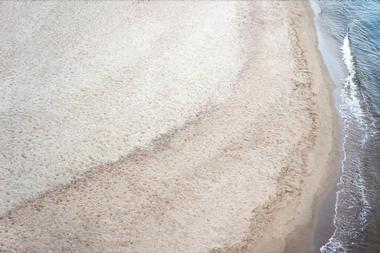 Santa Claus Beach is a popular beach among locals and one of the best kept secrets of the city of Santa Barbara. The sandy treasure is a somewhat uncrowded stretch of wide beach with soft white sand. Santa Claus Beach offers mild, great waves for plenty of fun in the ocean, such as boogie boarding, paddle boarding, swimming, and just general beach frolicking. The shore of the beach provides a gradual, shallow entry to the ocean, making Santa Claus Beach an ideal beach for children as well. Visitors may want to bring an umbrella with them as there is limited shade. 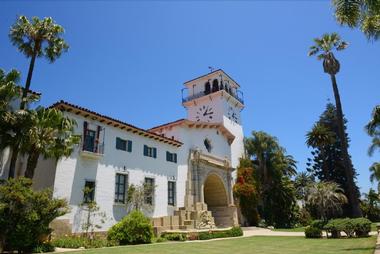 Visitors to the Santa Barbara County Courthouse have the chance to explore one of the most beautiful public buildings in America. The courthouse was designed using the Spanish-Colonial architectural style, constructed back in 1929. It is still a functioning courthouse and an iconic landmark of Santa Barbara due to its distinctive red tile roof, four-faced clock tower, verdant grounds and sunken gardens, and elegant arches. Guests can learn more about the Santa Barbara County Courthouse through one of the free drop-in tours offered at certain times.

21 Fun Kid-Friendly Things to Do in Santa Barbara