6 Best Things to Do in Seneca Rocks, WV 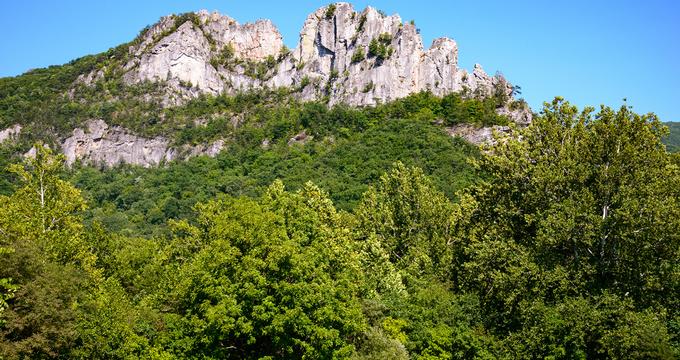 Seneca Rocks is a village in Pendleton County, West Virginia, at the junction of US 33, WV 28 and WV 55. It is located near the confluence of Seneca Creek and the North Fork South Branch Potomac River. The community lies at the foot of Seneca Rocks, the almost vertical cliff that attracts rock climbers from all over the world. The village has several rock climbing operations that offer guiding and rock climbing courses. Both the village and the famous rock are part of the Spruce Knob-Seneca Rocks National Recreation Area within the Monongahela National Forest. Seneca Rocks is the location of the historic Sites Homestead built in 1839, as well as the Seneca Rocks Visitor Center. Nearby Smoke Hole Caverns are show caves with fascinating cave formations. 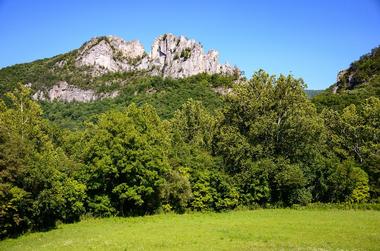 Seneca Rocks is a large rock formation and dominant local landmark in Pendleton County, West Virginia, USA. The south peak is inaccessible except by skilled rock climbers using technical rock climbing techniques. The entire Seneca Rocks are among the most popular local attractions and the almost vertical rock faces are a very popular with rock climbers. Seneca Rocks is located at the north end of the River Knobs, which has other similar ridges or "fins" including Judy Rocks and Nelson Rocks, on the western side of North Fork Mountain. Rising almost 900 feet above the spot where Seneca Creek meets the North Fork, Seneca Rocks is visually striking and it overlooks the village of Seneca Rocks. 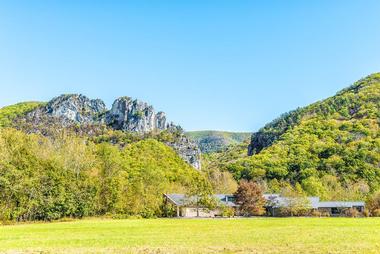 The Seneca Rocks Discovery Center is located at the base of Seneca Rocks, near the village of Seneca Rocks, West Virginia. It enjoys a majestic view of the fascinating vertical wall. The center has a gift shop, classrooms, art displays, and an indoor rock climbing wall for beginners. The center is great place to start a visit to the area. At the walking distance from the Center is the Sites Homestead, a historic home originally built as a log home in 1839 by Jacob Sites. The home is a testament to the use of local materials and skilled craftsmen. The grounds of the Homestead and the beautiful heirloom gardens are open during daylight hours. Tours of the home can be arranged.

Smoke Hole Caverns is a fascinating show cave in Grant County, West Virginia, near the Smoke Hole Canyon, about 13 km west of Petersburg. According to the local lore, the cave was used during Prohibition by moonshiners. Smoke Hole is owned and operated by Jerry and Janet Hedrick. The most fascinating feature in the caverns is called "The World's Largest Ribbon Stalactite." There are also a number of unusual helicitites and a crystal cave coral pool. The pool is one of the only two such features in the world. The cavern has been significantly altered to make it tourist friendly, resulting in extensive damage to the cave formations.

Seneca Rocks Climbing School and is the oldest climbing school in the Mid-Atlantic. It has been providing climbing instruction for more than 40 years. They teach beginning and experienced climbers alike, making sure they know how to climb in the safest way possible while enjoying one of most exhilarating activities possible. Over the past 46 years, the school instructors pioneered many techniques that are today recognized as the climbing instruction standard. Seneca provides exceptional rock climbing in a spectacular setting just hours from major cities like Pittsburgh and Washington DC. It has classic routes, from easy to moderate, as well as much harder routes that will keep you coming back. It is an environment where climbers of all skill level and experience level can find perfect challenges.


Seneca Rocks Mountain Guides was established in 1988 by Tom Cecil in order to provide high quality rock climbing and instruction at Seneca Rocks, West Virginia. It is the longest running climbing guide service under one owner in the region. Seneca Rocks Mountain Rides has a reputation as one of the most respected rock climbing guide services in the country. They use experiential teaching method, through the mentor/apprentice relationship. Their guides are considered the most experienced multi-pitch guides in the Mid-Atlantic. The school is the only of its kind that offers free camping at their Basecamp by Seneca Creek. The basecamp includes state of the art indoor training center and a complete outdoor kitchen.


Yokum’s Vacionland is a family-run business, located right at the base of Seneca Rocks, West Virginia, owned and operated by Carl and Shirley Yokum. Established 70 years ago, Yokum’s Vacationland includes two motels, two campgrounds, a few pet-friendly cabins, a restaurant, a deli and a store. Besides accommodation, Yokum’s offers horseback riding to the top of the Seneca Rock. Nearby are many attractions such as Spruce Knob, the highest point in West Virginia, Smoke Hole Caverns, Seneca Caverns, Blackwater Falls, West Virginia State Parks at Canaan Valley and Monongahela National Forest. There are plenty of hiking trails with scenic overlooks offering breathtaking views. The area has many seasonal festivals and events celebrating its history and culture.

6 Best Things to Do in Seneca Rocks, WV