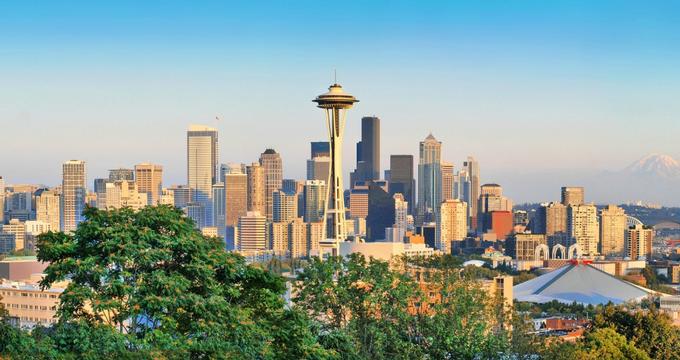 Almost every city has a nickname as well as an interesting backstory for each. Some names are well known, while others don’t even seem to realize they have nicknames. Sometimes the nicknames are pretty straightforward and easy to understand, while others are tough to figure out. Seattle, also known as the Emerald City, is an example of the latter.

Some people don’t even know that Seattle is called that. It seems a bit strange to some, while others will think it doesn’t sound right. Most people remember the Emerald City from the Wizard of Oz, but that actually has nothing to do with it. And no, Seattle isn’t into emeralds, or any other gemstone for that matter.

The truth is that Seattle’s nickname has much to do with the city’s greenery, as the city’s pretty much filled with green all year round, meaning that the name Emerald City refers to the color of its environment. The name also sounds like Washington’s nickname, the “Evergreen State,” in spite of the fact that the state has a significant amount of desert.

Why is Seattle so green?

You don’t need to do anything more than take a drive into Seattle and observe your surroundings. From the south, you see lots of evergreens and other kinds of plants lining the I-5. Come in from the north and you’ll see the same thing. As you come to the center, you’ll find even more plants nestled beautifully into public places like Discovery Park and the Washington Park Arboretum. Seattle is simply riddled with all kinds of greenery throughout the year. It comes in all shapes and sizes, too, such as ferns, shrubs, moss, trees, and even wildflowers. Green thrives here in all the seasons.

Of course, some seasons are greener than others. But you’d be surprised to learn that summer is the season when Seattle is the least green, and this has something to do with the rainy season, which usually gives life to more greenery and starts in September, continuing through fall and winter. But in summer, there’s not so much rain, and some lawns even end up drying out then. Still green, though.

Has Seattle always had this nickname?

No, as nicknames don’t just pop up. History records indicate that the name originated from a competition held to choose the nickname that was hosted by the Convention and Visitors Bureau back in 1981. In 1982, they chose Emerald City as the winning entry and used it as the nickname for Seattle.

Interestingly enough, Seattle used a couple of other nicknames before this one. It used to be called the Pacific Northwest as well as the Gateway to Alaska. Unfortunately, these nicknames couldn’t hold a candle to “Emerald City” when it comes to marketing.

Nicknames of other cities in the Northwest

As mentioned before, cities tend to have their own nicknames. You might be interested in knowing what other cities in the northwest are called as well.

- Bellevue – because of its park-like nature, Bellevue has been dubbed the City in a Park. Of course, this doesn’t mean that the city is literally a huge park, especially if you’re in the downtown area, although Downtown Park is right smack in the center of it all.

- Tacoma – known as the City of Destiny, Tacoma has been the Northern Pacific Railroad’s western terminus since the 1800s. Tacoma is also called T-Town for short. Its rich industrial history has also given rise to the name Grit City.

- Gig Harbor – it doesn’t take much imagination to understand why this place is called Maritime City. After all, the city does have “Harbor” in its real name. The harbor and all the marinas within the city are dead giveaways, too.

- Olympia – if you think Gig Harbor’s nickname was easy, then you didn’t know that Olympia is called “Oly” for short.

- Portland, Oregon – this one is aptly called the City of Roses, but with a twist. Before Portland got its name, there was only a beautiful rose garden by Washington Park, which is where it got the name. That, and the fact that they celebrated the Rose Festival annually. But after the nickname came out, the city saw a boom in rose gardens everywhere. Nicknames do make a difference!

Things to see in Seattle

Seattle is more than just its greenery. If you happen to be in the city, here are a couple of places you’ll want to visit:

- Seward Park: This 300-acre beauty is a place where families and couples go for walks and get a taste of Lake Washington from its best angle. There’s also a beach as well as a lot of picnic spots. Of course, you can’t miss the views of Mount Rainer as well as the beautiful skyline of the city.

- Chihuly Garden and Glass: Not much greenery here, but prepare to be mesmerized by the gallery’s glass collection, all made by Dale Chihuly. There are a number of pieces in the collection that will intrigue you, so take the time to look around. If you’re interested, there are also videos that show how the artist creates his work.

- Museum of Flight: Remember the name Jet City? Seattle is home to a museum filled with over 150 spacecraft, artifacts, and pretty much anything an aircraft fan would be excited to see in the flesh. There’s also a children’s flight zone for kids who want to test their piloting skills.

Of course, this is by no means an exhaustive list. There’s much to see and do in Seattle, and pretty soon you’ll be convinced that the Emerald City is quite the gem of a city.