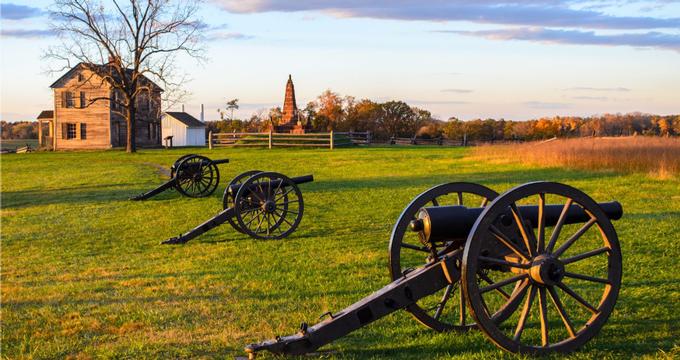 Manassas, VA is home to over 41,000 people with plenty of historical sites to visit. The town demographics are quite diverse, with more than 21% of Hispanic descent and roughly 16% African American. The weather is nice year-round, with the summer months finding more humidity than the winter months. Manassas, VA was the location of both Battles of Bull Run, so there is a lot of Civil War history and historical landmarks to visit around the area. For those foodies vacationing, several breweries, distilleries, and restaurants serve up fresh drinks and food daily. CDC information for travelers. Hours/availability may have changed. 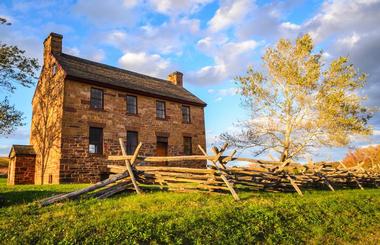 In 1966, the Manassas National Battlefield Park was added to the National Register of Historic Places. Since then, over 900,000 people visit this national park each year. It is the location of both the First and Second Battles of Bull Run. Visitors should be sure to check out the Henry Hill Visitor Center while at the Battlefield Park. This visitor’s center houses many civil war uniforms and weapons for viewing. Additional exhibits cover the two battles and demonstrate how they may have played out. With over 5,000 acres of land covering the Battlefield Park, there are a number of buildings and sites that are points of interest for visitors, including Groveton, Brawner’s Farm, and the Robinson House. 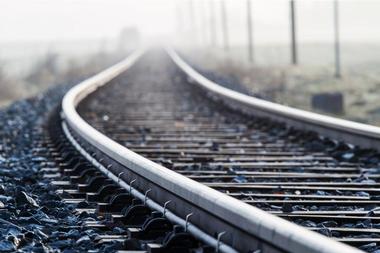 Those traveling may choose to take Amtrak to get to Manassas. The Manassas Station, built in 1914, is the stop for the Amtrak trains Northeast Regional, Cardinal, and Crescent. It is also the main station along the Virginia Railway Express, the railway that travels in and out of Washington D.C. proper. During the 1990s, the city of Manassas purchased the line and renovated the station building. This renovated building is about 32 feet longer than the original structure. Visitors to the station have access the Tourist Information Center and the James & Marion Payne Memorial Railroad Gallery. 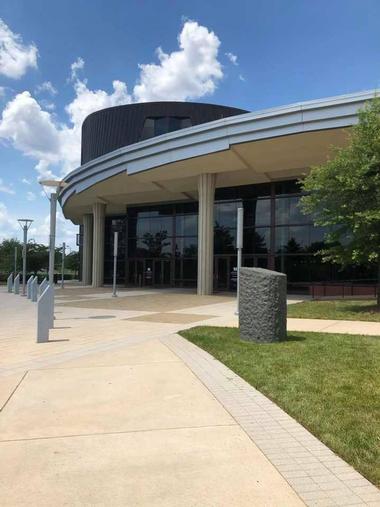 Covering 85,000 square feet, the Hylton Performing Arts Center is an opera-style house with over 1,123 seats. Along with Merchant Hall, the main performing arts theater, the Gregory Family Theater is a large open space, where seating can be arranged based on the performance needs. The Performing Arts Center offers a summer camp for kids, dance recitals, shows, and art exhibits. The Center also holds a family series, featuring kid-friendly shows and shows featuring bright lights, black lights, and physical comedy. This is a great opportunity for performers to create and perform shows with fake animals using unique materials and effects. 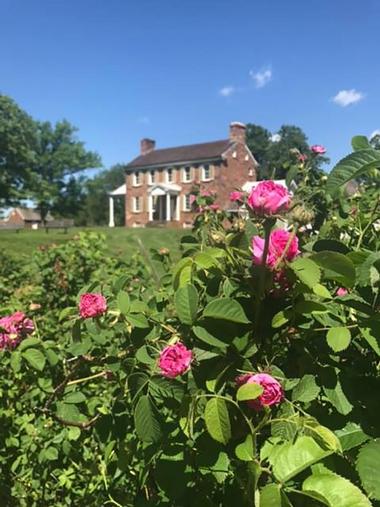 As one of the important sites to visit on the Manassas National Battlefield Park, the Ben Lomond Historical Site is also referred to as the Stone House. In 1861, Confederates took command of the house to use as a hospital. For both the First and Second Battles of Bull Run (also known as the First and Second Battles of Manassas), this house served as a hospital for the wounded and later become a hospital for the sick and diseased. Once the Union forces took the house, they destroyed a lot of the interior. Years after being rebuilt, visitors can now see the renovated home preserved as a hospital, as well as the slave quarters and smokehouse. 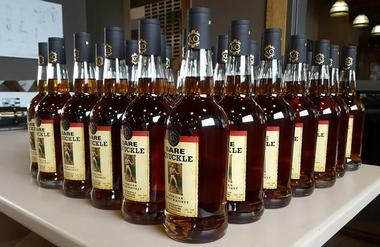 
Both veterans, Bill Karlson and John O’Mara were friends for years before opening KO Distilling. In 2015, KO Distillery offered its first tasting of unaged whiskey, and a year later, they offered their first aged whiskey. Today, visitors to the distillery can try one of the four whiskeys or three gins. Those visiting the distillery can begin with a tour of the facilities and end with one of three tastings: the classic tasting, the specialty whiskey tasting, or the cocktail tasting. KO Distilling has created 28 specialty cocktails using their spirits, and the tasting lets you try three miniature versions of these. 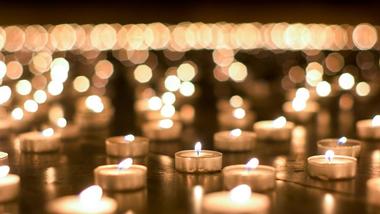 
In 1879, the All Saints Catholic Church was opened as a mission church of only 100. Today, the 2008 building holds 800. In 1999, All Saints Catholic School was built, offering grades Pre-K through 8. Masses are held eight times a weekend, which include three in Spanish. For those visiting for a longer vacation, All Saints offers a Vacation Bible School for children. Along with youth ministries, parish life also has senior activities and an annual festival. Along with parish life, there are also social ministries to get involved in, including jail ministry, a food pantry, and traveling prayer groups. 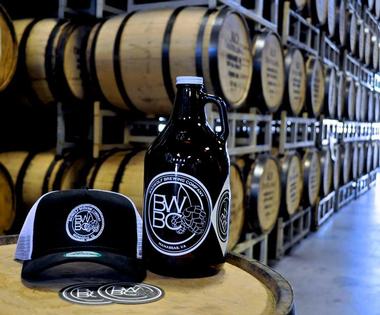 Jeremy first found his interest in craft beer on a visit to Germany. Prior to 2012, all breweries were required to have a restaurant permit and sell food. It wasn’t until then that Jeremy and his wife, Sarah, were able to open the brewery because they had a lack of seed money. Badwolf Brewing is dedicated to experimenting with beers and sours. Their tasting room has limited space, but visitors can come and try beers with freshly popped popcorn. Outside food is permitted, so feel free to carry in food to enjoy with one of the IPAs or stouts on tap. 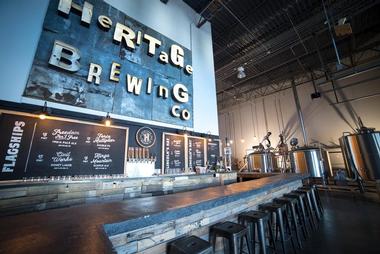 Heritage Brewing Co. began with two veterans who had a dream to make flavorful brews. Though it has expanded, the team at Heritage Brewing Co. is still small and dedicated. Since its creation, Heritage Brewing Co. has partnered with the Unquiet Professional, which gives back to the military community that the original founders once dedicated their lives to. Along with beer, Heritage Brewing Co. also roasts and brews coffee. In the tasting room, visitors can try brews on one of the 16 taps. This includes flagship beers, weekly experimental beers, and cold brew coffees. During the summer, the Department of Smoke food truck is on site to deliver fresh barbeque. 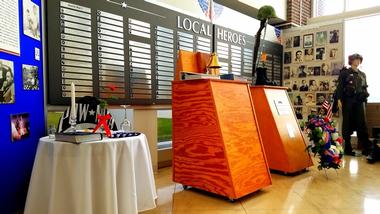 The Freedom Museum is currently located in the Main Terminal at the Manassas Regional Airport. Focusing on the 20th Century, the Freedom Museum looks at the stories and traditions of the people from the Manassas area. Exhibits feature artifacts, photos, and other objects from the area and from those who served in the military from World War I to present. As a Smithsonian Institution affiliate museum, this small exhibit is currently under the process of funding for a permanent building that will be adjacent to the airport. Both self-guided and guided tours are available for individuals and groups. Admission to the museum is currently free.

10.Center for the Arts at the Candy Factory 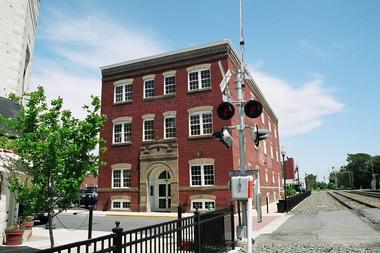 © Center for the Arts at the Candy Factory

In 1984, artists founded the Center for the Arts with the intent to promote the visual arts in Manassas. The Center for the Arts is located in the old town Candy Factory and covers three stories. The Center was renovated in 2001-2002, which now holds a theater in the round, a gallery, and a classroom. Several classes and programs are offered through the Center for the Arts. Visitors can consider joining a one-time or long-term class in art, dancing, and theater. Guests can also check out visiting art exhibits featuring local and non-local artists, and when planned just right, can attend the reception to meet artists. 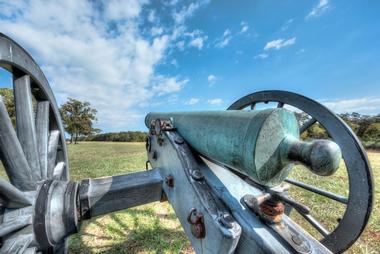 The 11 acres that house the Mayfield Fort have human artifacts dating back to 3,700 BC. However, the fortification wasn’t built until 1861 during the Civil War. This historic site was once the home to the Hooe family, but once the Confederates came to defend the railroad lines, they had to abandon their home. During the Confederate’s control, conscript slaves and troops built a ring of 12 fortifications around the railroad. Guests can visit the land, see the markers for the foundation of the original Hooe mansion, as well as the remainder of the fortifications. This site houses living history events. 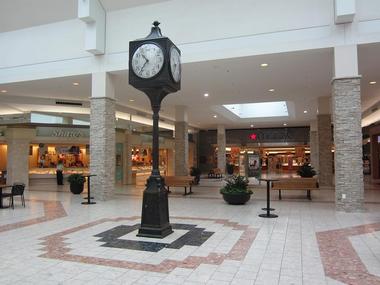 The Manassas Mall was built in 1972. The common areas offer free wifi and an area for community events, like recitals and fundraisers. During busy times, there is a parental escort policy for anyone under the age of 18 on Fridays and Saturdays. Patrons can shop in over 65 stores, including big name retail stores, like Walmart, and some lesser known stores, like Eyebrow Designer 21. There are over ten popular restaurants to purchase food from in the food courts, and those looking for additional fun can check out the Autobahn indoor speedway and the Uptown Alley bowling, laser tag, and game arena. 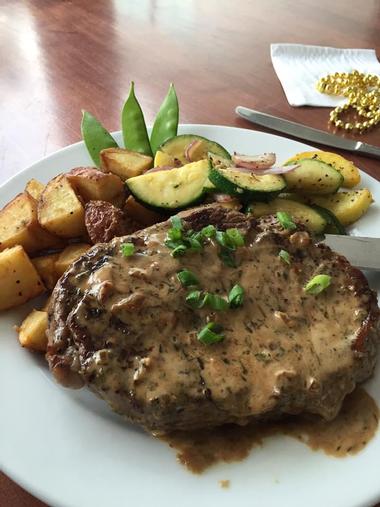 For those hungry for Cajun Creole, Okra’s has been a staple in the Manassas area for twenty years. Bringing Louisiana to Virginia, patrons can even eat on the patio during the summer months and listen to live music on Battle Street. With authentic Creole flavors, patrons can indulge in some tasty appetizers or cocktails during happy hour or imbibe with their meals. Be sure to check out their dirty rice, shrimp and grits, crawfish popcorn, alligator bites (yes, real alligator sirloin), jambalaya or one of the other Cajun classics. Desserts are not forgotten, with crème brulee, bananas foster, and cranberry bread pudding with whiskey sauce offered. 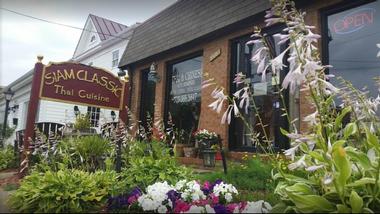 Siam Classic is a Thai restaurant that serves all Halal-standard meats. While there are both vegetarian and gluten-free options, there are many appetizers, soups, noodle bowls, and entrees available on the menu. All food is prepared with the freshest ingredients; no processed foods are used in the kitchens. When visiting Manassas, consider ordering one of the many tasty Thai or Thai-inspired dishes available, such as Pad Woon Sen, Ped Kra Prao, Gai Non Rung, or Flaming Quail. Curry dishes are also available to order. Desserts are Thai-inspired as well, such as a red bean puff, mango with sticky rice, bean custard, or wanton wrapped bananas.

Places to eat near me, free points of interest, lakes near me, waterfalls, weekend getaways near me: Beaches for Toddlers and Kids, San Juan, Lafayette, Parker, Salida 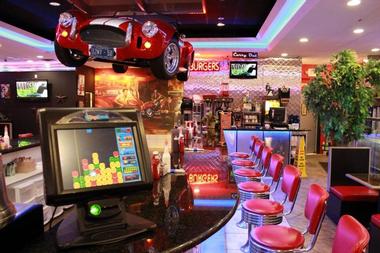 For breakfast, lunch, or dinner with a 50s flair, consider heading over to the Jukebox Diner. Diners have the chance to enter a restaurant that still resembles an old 50s café, right down to a glass block counter and red booths. Food is classic American comfort food, like meatloaf, clubs, and Buffalo wings. However, the menu also combines Mediterranean and Middle Eastern flavors for some spectacular international dishes, like falafel, shish-tawook, or chicken alla picata. Patrons should also consider ordering one of their several organic milkshakes to top off the 50s diner experience.

25 Best Things to Do in Hampton, VA

20 Best Things to Do in Virginia Beach (Virginia)