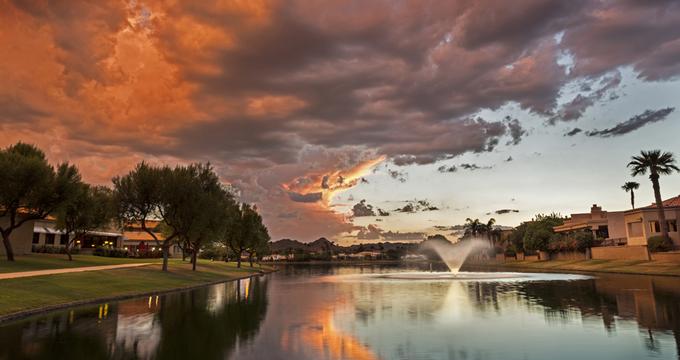 Scottsdale is one of many cities located in what is called the Valley of the Sun where there are more than 330 days of sunshine per year. The long summer from May through September is divided into the dry summer and the wet summer. The dry summer sees very high temperatures, low humidity, and no precipitation. The wet summer or the monsoon season lasts from July through mid-September with short late-day thunderstorms and high winds. In the fall the precipitation ends and temperatures start to drop. Winter is cooler with occasional frost warnings but no snow. The best time to visit Scottsdale is in the spring when temperatures are pleasant for outdoor activities. 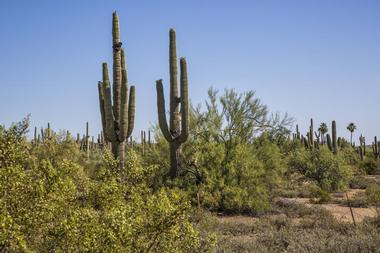 January measures at the second coldest month of the year in Scottsdale as the average high temperature hovers at 66°F (19°C), and the average low temperature settles at 43°F (6°C). This month receives the highest precipitation rate of the year, too, with an expected rainfall of 1 inch (32 mm).

May sees nearly 0 inches (5 mm) of precipitation, the lowest out of the entire year, coupled with one of the warmer months of the year. May’s average high temperature is 92°F (34°C) while it’s low temperature is 66°F (19°C).

Scottsdale Weather in August: The second hottest month of the year is August where the average high temperature is 102°F (39°C). Low temperatures decrease by a single degree when compared to July.

September marks the beginning of autumn. The average high and average low temperatures range between 98°F (36°C) and 74°F (23°C).

In October, both average high and average low temperatures drop by over 10 degrees to 87°F (30°C) and 62°F (17°C) respectively. By this time, tourists start to dwindle making it a great time to visit for those who prefer to avoid crowds.

December is the coldest month in Scottsdale with an average high temperature of 65°F (18°C). The average low temperature decreases further to 42°F (6°C).

There’s no doubt that Arizona is a gorgeous state to visit. Arguably the best time to visit Arizona’s most popular destination, the Grand Canyon, is during the winter months of December through February. During this time, the weather is mild and quite sunny. September through April, on the other hand, is the most ideal time to pay a visit to the southern cities of Arizona such as Phoenix and Tucson. Festival goers should plan their trip to Arizona in April or May, as this largely festival season. If your main desire to avoid the tourist crowds, however, plan your visit anywhere between early May and late October.

2.Getting to Scottsdale, Arizona

The Phoenix Sky Harbor International Airport is the airport that serves Scottsdale. It is located just ten miles from downtown Scottsdale. This airport connects Scottsdale with more than 100 domestic and international cities: more than 44 million passengers fly in and out of the airport each year. Amtrak has several lines that serve Phoenix from various cities around the country and then it’s just a short ride to Scottsdale by another form of transportation. Greyhound and Gotobus both have routes that stop in Phoenix, and again another form of transportation is needed to get to Scottsdale. For visitors arriving by car, Interstate 10 and 17 are the main routes through the Scottsdale area.

Next read: 23 Best Things to Do in Scottsdale, Arizona 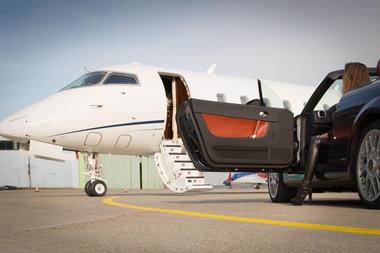 The Phoenix Sky Harbor International Airport offers several ways to get to Scottsdale. There are approximately 15 car rental agencies at the airport and shuttles will take visitors from the terminal to the Rental Car Center. Bus and charter companies include All Aboard America, American Explorer Motorcoach, Arrow Stage Lines, Dunn Transportation, and many others. Another option is to take a taxi, shuttle, or limousine from the airport to Scottsdale. Some of these companies include Desert Knights Sedans and Limousines, the Driver Provider, Pinnacle Executive Transportation, and more. Another interesting way to get to Scottsdale is to use AZ Ride Motorcycle Rentals. 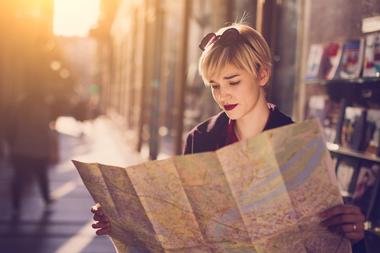 The Scottsdale Convention and Visitors Bureau is your best source for information about the city. It has two locations: the Visitor Center - Galleria Corporate Centre on North Scottsdale Road; and the Visitor Center - Scottsdale Fashion Square Mall on East Camelback Road. Staff members at both locations will help visitors with all their needs such as where to stay, where to eat, where to shop, what to see and do, and how to get around the city. They can help you plan your itinerary and make suggestions to make your visit enjoyable. There are brochures for more than 400 businesses in the Scottsdale area at the first location. 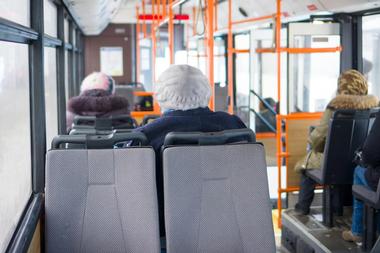 
Scottsdale offers several ways to get around and see its attractions. One choice is to rent a car at the Phoenix Sky Harbor International Airport and then explore Scottsdale by car. The Valley Metro system is made up of buses and light rail trains. This system stops at many of Scottsdale’s most popular attractions. There are single fares and all day passes that are good for the buses and trains. The Scottsdale Trolley is a free trolley that has stops all around the downtown area of Scottsdale. This is a great way to visit the districts that make up downtown Scottsdale with its many galleries, museums, restaurants, and shops. 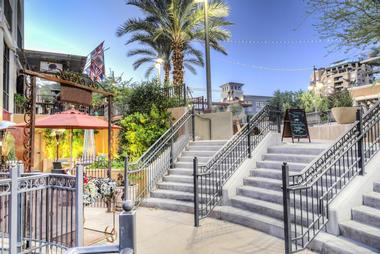 
Scottsdale is home to more than 600 restaurants that serve local cuisine as well as international dishes. Some of the fine dining restaurants are run by celebrity chefs who create new dishes on a regular basis for diners to sample. Because of the sunny climate, dining outdoors is popular during part of the year in Scottsdale. There are steakhouses like BLT Steak, fun rustic Western saloons, and restaurants serving ethnic cuisine. Virtu is a small cafe that serves Mediterranean food. Lon’s at the Hermosa is known for its tasty Southwest American food. The Citizen Public House is reminiscent of an English pub. For Italian food, try EVO in Old Town Scottsdale. 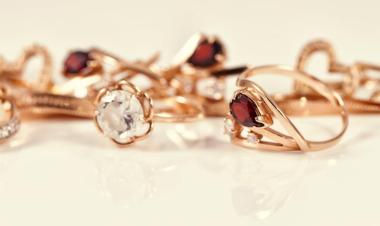 There are many places to shop in Scottsdale: it is a favorite past time for many people. There are shopping centers that include air-conditioned malls and open-air shopping centers. Some of Scottsdale’s many shopping centers and malls include the Scottsdale Fashion Square, the Kierland Commons, the Scottsdale Quarter, the Pavilions at Talking Stick Shopping Center, the Scottsdale Waterfront, the SHOPS at Gainey Village, and many more. Macy’s Department Store is located on East Camelback Road in Scottsdale. Scottsdale is also full of specialty shops selling a variety of items like clothing including Western wear, souvenirs and gifts, jewelry, and Native American handicrafts. 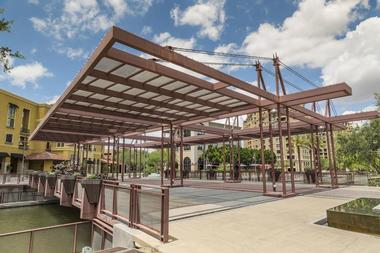 Scottsdale is known for its luxury resorts, high-end shops, and golf courses, but Old Town Scottsdale is the heart of the city. This neighborhood has a Western feel to it and this makes it popular with visitors. It is a pedestrian friendly area with many hotels, museums, restaurants, shops, more. If you are interested in another area with a Western feel, head out to Cave Creek. Here you’ll find the spirit of the Old West with beautiful desert scenery as well as shops and restaurants. South Scottsdale is known for its nightlife, good food at eclectic restaurants, and great shopping.

9.Getting Married in Scottsdale 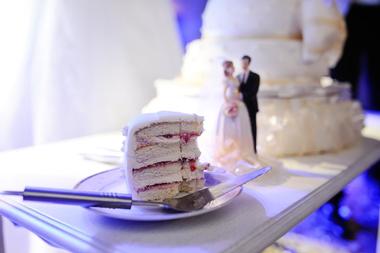 With its stunning scenery and warm climate, Scottsdale is a popular place for weddings. A marriage license can be obtained at the Northeast Regional Court Center on North 40th Street in Phoenix. Some of the hotel wedding venues include the Westin Kierland Resort and Spa, the W Scottsdale, Chaparral Suites Resort, Scottsdale Pima Inn and Suites, and many more. Clubs that cater to weddings are the Grayhawk Golf Club, the Gainey Ranch Gold Club, the McCormick Ranch Golf Club, and more. Other Scottsdale wedding venues include the SOCA Gallery, the Su Vino Winery, the Scottsdale Arts Center, and the Desert Foothills Events and Weddings. 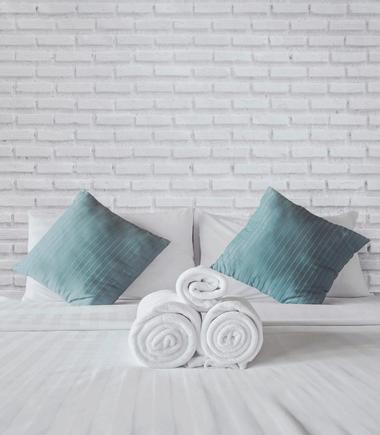 Scottsdale features a wide range of accommodations for visitors. There are luxury hotels and resorts, boutiques hotels, and affordable family-friendly hotels. Luxury hotel properties include the Canyon Suites at the Phoenician, the Four Seasons Resort Scottsdale at Troon North, the Fairmont Scottsdale Princess, the Hyatt Regency Scottsdale resort and Spa at Gainey Ranch, and many more. Three Palms is an affordable remodeled boutique hotel just ten minutes from Old Town Scottsdale. With its mountain vies, the Gainey Suites Hotel is an all-suite hotel that is perfect for families with its extra bedroom, full kitchen, and palm tree lined pool.

20 Best Things to Do in Bluffton, South Carolina

20 Best Things to Do in Murfreesboro, Tennessee

Where to Stay in Tulsa - 15 Best Romantic Getaways

21 Best Things to Do in Macon, Georgia