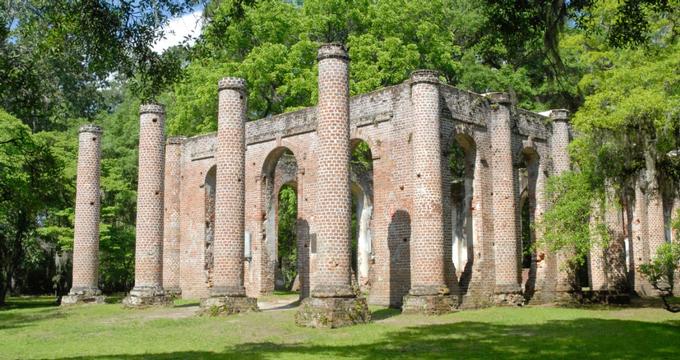 Yemassee is a small Lowcountry town in Beaufort and Hampton counties in South Carolina. There are several historic plantations with interesting plantation houses around the town. The best known are Frampton Plantation House, which often organizes historic reenactments, and Auldbrass Plantation House, designed and built in part by Frank Lloyd Wright. Old Sheldon Church ruins are fascinating remnants of the former church, surrounded by ancient oaks. Stoney Creek Presbyterian Church is the the shooting site of the Forrest Gump movie and is the only church in the area not burnt by Sherman’s march during the Civil War. 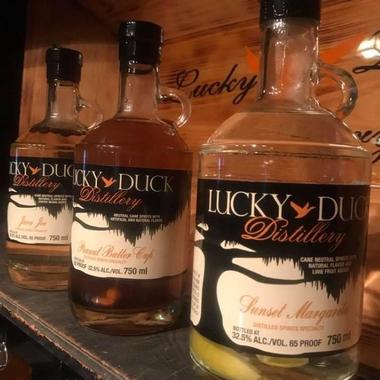 Lucky Duck Distillery is a micro moonshine and bourbon distillery in Yemassee, South Carolina, operating from a nicely renovated shed, once a plumbing business. Lucky Duck specializes in a moonshine that is not too strong and can be tasted from the rustic tasting room attached to the production facility separated by a glass window. Guests can watch the process of distilling while enjoying free samples of their favorite product. The owner, Chase Flower, is passionate about his craft and is happy to talk about the long and hard process of fulfilling his dream of making moonshine he learned about as a kid, now that it is legal to do it. Lucky Duck Distillery is open Tuesday through Saturday, 10AM-5PM. 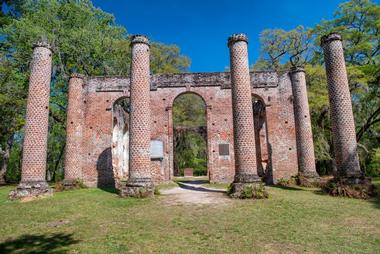 The Old Sheldon Church Ruins is a historic site of the former Sheldon Church located in Yemassee, northern Beaufort County, South Carolina, approximately 17 miles from Beaufort. The building was originally known as Prince William's Parish Church, built between 1745 and 1753 in the English Georgian style. The traditional belief is that the church was burned in 1779 by the British during the Revolutionary War and was rebuilt in 1826. It was burned again in 1865 by the Federal Army during the Civil War. According to another theory, the church was not burned at all but was destroyed when the interior materials were used to build homes burnt by Sherman army. The ruins are surrounded by majestic oaks and several scattered graves. The remains of Colonel William Bull lie inside the ruins of the church. He was credited with assisting in establishing the physical layout of Savannah, Georgia. The ruins are today a popular site in the Lowcountry for photographers and wedding ceremonies. 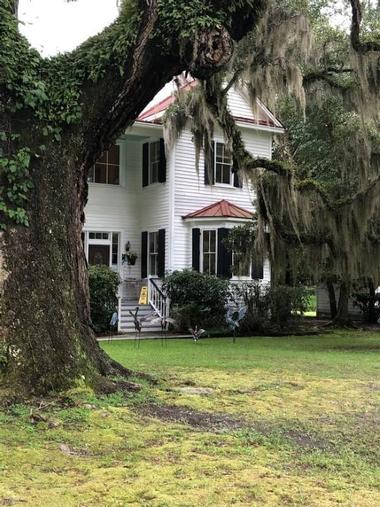 Frampton plantation property was part of a King’s Grant to the Frampton family in the 1700s. General Sherman’s troops burned the plantation house and all the farm buildings in 1865. John Frampton built on the same site the present charming Lowcountry farmhouse in 1868, and continued to farm the land. The old house was completely renovated in the 1930, adding indoor plumbing and electrical wiring. In 1993 the Columbia developer Wymann Boozer donated the Frampton House to the Lowcountry Tourism Commission for the Lowcountry Visitor’s Center and Museum, ensuring that the old farmhouse would be restored. The magnificent old oaks that frame the building and the Civil War earthworks in the backyard were also protected. Today, the Frampton House hosts The Lowcountry & Resort Islands Tourism Commission upstairs while downstairs now serves as the Lowcountry Visitor’s Center and Museum. 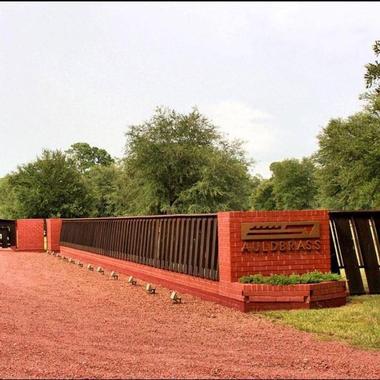 Auldbrass Plantation is located near the town of Yemassee, in Beaufort County, South Carolina. According to the earliest records from 1736, the farm was originally known as Mount Pleasant. The plantation was created when industrial engineer C. Leigh Stevens put together five parcels of land along the Combahee River. The main house, stable complex and kennels were designed and built from 1940–1951 by Frank Lloyd Wright . The plantation is registered in the National Register of Historic Places. The plantation was purchased in 1986 by film producer Joel Silver. Auldbrass Plantation is an excellent example of historic preservation and is rarely open to the public.


Harold's Country Club was originally built in the 1930s as a Chevrolet dealership in Yemassee, South Carolina. After that it had been converted to a gas station and auto parts store. Harold Peeples bought it in the late 1970s and started hosting Thursday night covered dinners. Harold was doing all the cooking. Soon, he was cooking more than only on Thursdays and started charging a small fee to cover his expenses and Harold’s Country Club was born. The place is today enormously popular. It is decorated with keepsakes from the past lives of the property. The seating is the communal style so that the guests have a chance to get to know people they are sharing a table with. The menu at Harold's is unique as well. There is only one item per night, and you better call in advance to find out what it is and to reserve it. For example, Harold’s steaks are grilled to perfection, but only on Saturday nights.


5 Best Things to Do in Yemassee, SC