15 of the World's Largest Swimming Pools 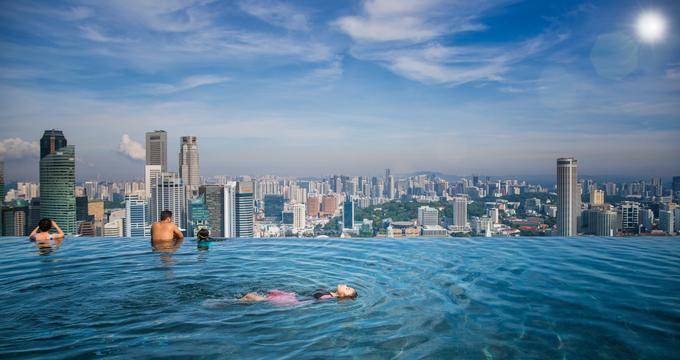 Many resorts around the world have taken swimming pools to the next level, offering man-made lagoons recreating beachfront experiences and elaborate rooftop pools providing spectacular skyline views. These 15 pools have made the history books, ranking as the largest in the world according to the Guinness Book of World Records. 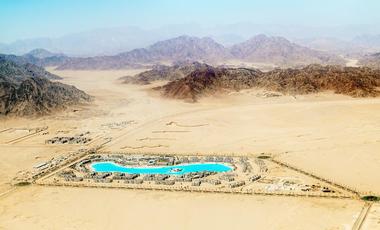 As of 2015, Citystars Sharm El Sheikh is the Guinness World Record holder for the largest manmade crystal lagoon, covering a distance of more than one million square feet. White sand beaches surround the sea water lagoon, which offers opportunities for swimming, kayaking, and sailing. The lagoon is part of the planned Fairmont Citystars Sharm El Sheikh resort, which will offer 414 guest rooms and 316 private residences available for rental upon its completion. Fairmont Hotels and Resorts will operate the resort and development. They currently oversee world-famous hotels and resorts such as San Francisco’s Fairmont Hotel, New York’s The Plaza Hotel, London’s The Savoy, and Quebec City’s Le Château Frontenac. 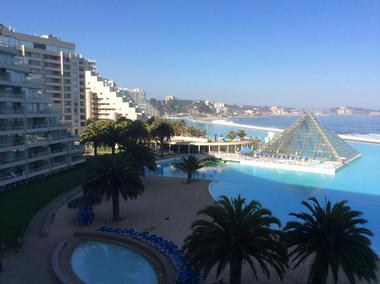 San Alfonso del Mar is a private residential resort within the Chilean city of Algarrobo, which is located approximately 62 miles from the nation’s capital city of Santiago. Architect Fernando Fischmann of Crystal Lagoons developed the pool, which opened in December of 2006 at a development cost of $3.5 million. The 3,323-foot pool covers a distance of 20 acres and holds more than 66 million gallons of sea water, reaching maximum depths of 11.5 feet. Access to the pool is restricted to resort residents, with short and long-term apartment rentals available on a regular basis. 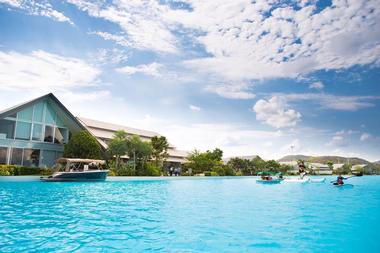 MahaSamutr’s 17-acre giant lagoon is the centerpiece of a $450 million resort community complex that was designed by Japanese architect Kengo Kuma and constructed in 2014 by Thai real estate corporation Pace Development. Like many other recent giant man-made lagoons, the pool was developed by the Crystal Lagoons corporation and features white sand beaches and turquoise waters meant to mimic the pristine environment of unspoiled natural beaches and lagoons. Four-bedroom homes at the resort are available for sale, with all homes offering direct access to the lagoon’s beach activities like kayaking, paddleboarding, and sailing. Other amenities for residents include a spa, waterfront dining options, and guided group social activities. 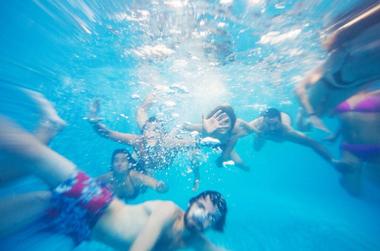 Las Brisas de Santo Domingo is part of the exclusive Santo Domingo community located within the Valparaiso region of Chile’s San Antonio province. The resort community is anchored by its five-acre salt water pool, which measures roughly the same size as 16 Olympic-sized swimming pools put together. The pool, developed by Crystal Lagoons, overlooks the Pacific Ocean and mimics its brilliant blue waters. At the time of its construction, the pool was the second-largest of its kind in the world to nearby San Alfonso del Mar. 45 million liters of temperature-controlled sea water are pumped into the pool daily, which recreates beachfront swimming and water sports conditions for residents, as swimming in the ocean is not permitted. 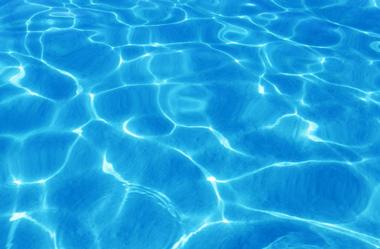 
Laguna Bahia spans a distance of more than 152,000 square feet and measures nearly 3.5 acres in size, making it the second-largest pool in the city of Algarrobo after its neighboring resort pool at San Alfonso del Mar. In addition to extensive swimming space, the pool offers opportunities for a variety of beachfront water activities, including windsurfing and kayaking. A children’s section of the pool features shallow waters for wading, while an extended beach area offers ample opportunities for relaxing and sunbathing. The pool is part of the Laguna Bahia private resort, which offers long-term apartment and extended stay rentals with private kitchens, dining and seating areas, and bathrooms.


Dreamworld Fun Lagoon is the world’s largest freshwater swimming pool, measuring approximately two acres and covering a surface area of more than 95,000 square feet. The pool opened in 2008 as part of the Dreamworld theme park, which is located in the Pakistani metropolis of Karachi. More than two million gallons of water are pumped into the pool from local wells, creating artificial sea waves reaching heights of up to four feet. Several water slides are offered at the pool, along with relaxing water activities such as swings and rowboats. Other activities available at Dreamworld include a golf course, bowling alley, and expansive resort hotel with luxury dining. 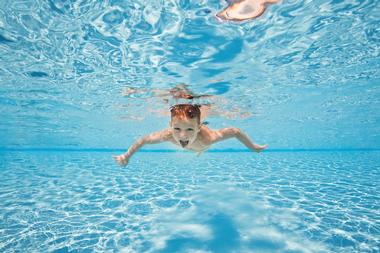 The Seagaia Ocean Dome was one of the largest water parks in the world at the time of its original opening in 1993 as part of the Sheraton Seagaia Resort, earning it a listing in the Guinness Book of World Records. The Polynesian-themed dome pool measured 300 by 100 meters and spanned an area of more than 87,000 square feet, making it the largest indoor swimming pool in the world. The major dome features included a flame-spitting mechanical volcano and the largest retractable roof in the world. Though the dome and resort were closed in 2007, they reopened in 2016 as the Phoenix Seagaia Resort, which offers newly-remodeled guest rooms, a 36th-floor exclusive club floor, and a guests-only terrace.

Piscine Alfred Nakache is named in honor of Jewish swimmer Alfred Nakache, who represented France in the 1936 and 1948 Olympics and is one of only two known Jewish athletes to compete in the Olympics following the Holocaust. The pool was constructed in 1931, making it one of the oldest modern pool complexes still in use today. It is located on Toulouse, France’s Ramier Island within the Garonne River and features unique Art Deco architecture. An indoor and outdoor section are available, with temperature control in the indoor section for year-round use. In total, the two pool sections measures 150 by 50 meters and span a surface area of more than 80,000 square feet.

Where can you get away, luxury resorts & family weekend hotels to visit around me: Portland, Martha's Vineyard, Miami, WA, MN , From D.C., Destin, MA, AK, Wilmington, Salem 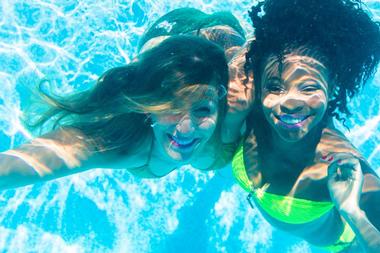 Hayman Island Resort’s pool spans the distance of more than seven Olympic-sized pools, clocking in at a surface area of over 78,000 feet. The man-made lagoon was constructed in 1985 as part of the private Hayman Island resort, which is located in the Whitsundays within the Great Barrier Reef. As one of the largest pools in the Southern Hemisphere, the pool features a freshwater area surrounded by a larger saltwater section, with a sand bar along the center for relaxation. Four interconnecting boardwalks span the water’s surface, with the largest measuring 165 feet. The resort is one of only four within the Whitsundays offering 160 guest rooms, penthouses, and villas alongside a wide variety of guest activities and amenities. 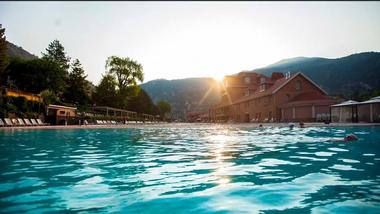 Glenwood Springs Pool is the largest hot springs pool in the world, covering a distance of more than 30,000 square feet. The pool is serviced by hot springs that have been bubbling for millions of years and were considered to have medicinal properties by the indigenous Ute tribe, who called the springs Yampah, which translates as “big medicine.” Since 1888, the springs have been open as a public resort, offering a large main pool kept at 93 degrees Fahrenheit and a smaller therapy pool hot tub maintained at 104 degrees Fahrenheit. The main pool pumps more than one million gallons of water and offers a lap lane, diving section, and two water slides. 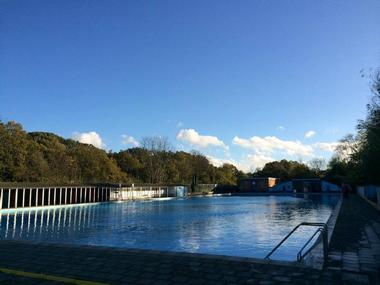 Tooting Bec Lido is the United Kingdom’s largest freshwater swimming pool, spanning a surface distance of 100 by 33 yards. The open-air swimming pool was originally opened to the public in 1906 as Tooting Bathing-Lake, offering segregated bathing sections for men and women until 1931. Though it nearly closed in the early 1990s, it was saved due to campaigning efforts by the South London Swimming Club, who use it as their exclusive home club throughout the winter months. It received international attention for its use in the feature film Snatch as the site of Brad Pitt’s character’s boxing pool scene. 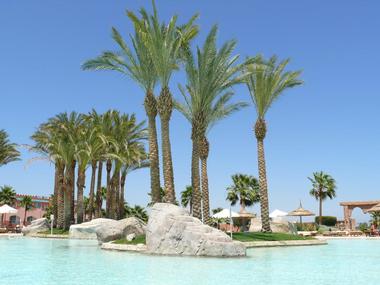 Mamlouk Palace: The Aqua is the centerpiece of the Sunrise Mamlouk Palace Resort in Hurghada, which was constructed at the site of a former fishing village. The pool covers a surface area of more than 21,000 square feet and features indoor and outdoor sections, along with a sub-aqua diving center, windsurfing provisions, and a Jacuzzi hot tub area. 465 luxury guest rooms are offered at the resort, which have spectacular panoramic views of the surrounding region and modern amenities such as minibars, satellite televisions, and free in-room wireless internet service. Other hotel facilities include a techno gym, a golf course, and tennis, soccer, and beach volleyball courts. 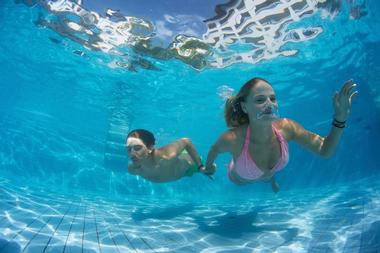 Four Seasons Rock Pool is part of the Four Seasons Resort Hualalai, which is located in Ka?upulehu along Hawai?i’s Kona-Kohala Coast. The resort was constructed in 1996 and designed by Hill Glazier Architects, with landscape design overseen by Bensley Design and Julie Cline. It is the only AAA Five Diamond resort on the Big Island. Its rectangular pool measures 656 by 98 feet and is carved from natural oceanfront lava rock, showcasing a natural breakwater. Depths range between zero and five feet and provide a natural habitat for sea life such as the indigenous honu turtle. Other hotel amenities include three restaurants serving traditional dishes using locally-sourced ingredients, a 28,000-square-foot tropical garden spa, and the Ka?upulehu Cultural Center, which offers traditional Hawai’ian culture programming. 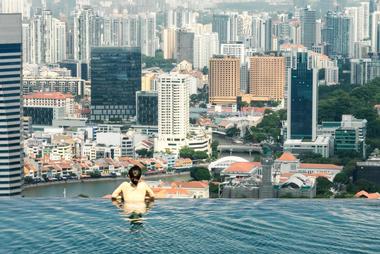 Marina Bay Sands’ Infinity Pool is the world’s largest rooftop infinity pool, ascending 57 stories and providing one-of-a-kind views of the Singapore skyline. Covering a surface area of more than 16,000 square feet, the pool is the length of three Olympic-sized swimming pools and is part of the Marina Sands SkyPark, which also offers the rooftop nightclubs Lavo and Ce La Vie. You will also find a 360-degree public observation deck. The resort is the most expensive standalone casino resort in the world, opened in 2010 at a cost of more than $8 billion and containing a 500-table atrium casino. Other resort amenities include a convention and exhibition center, two theaters, restaurants cultivated by celebrity chefs, and the Shoppes at Marina Bay Sands designer shopping mall.

Places to eat near me, free points of interest, lakes near me, waterfalls, weekend getaways near me: Best Places to Visit in USA, Frankfort, Rehoboth Beach, Delaware, Cadillac, CA Hot Springs 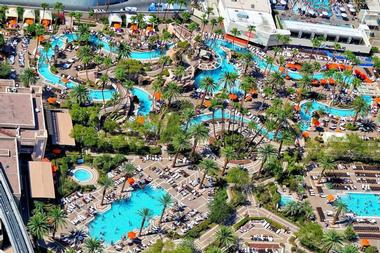 The MGM Grand Pool recreates the splendor and opulence of Hollywood’s golden age within a 6.5-acre pool complex that offers four pool areas, three whirlpools and hot tubs, and a lazy river that runs the length of the entire complex. The pool’s combined surface spans more than 15,000 square feet, making it one of the largest pool complexes in the United States. Poolside bar and cabana service is on offer, and wheelchair ramps and chair lifts are available in all pools. The complex is located within the MGM Grand Las Vegas hotel and casino, which is the United States’ largest hotel, offering 6,852 guest rooms and suites. Other hotel amenities include the MGM Grand Garden Arena, Grand Spa, and visitor attractions such as a lion habitat, and CSI: The Experience interactive exhibit.

15 of the World's Largest Swimming Pools