14 Best Things to Do in Hyde Park, New York 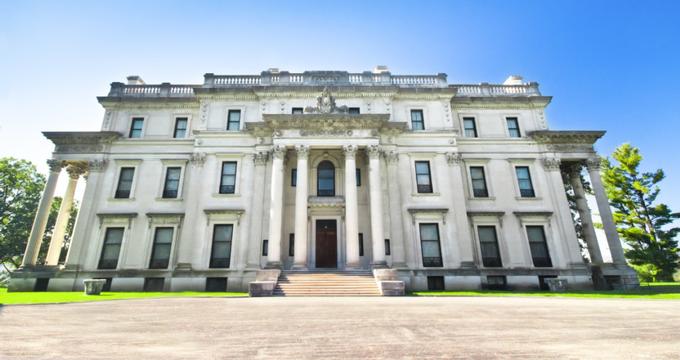 Set on the banks of the Hudson River, Hyde Park is one of New York State's hidden gems. The town is best known for being the lifelong home of Franklin D. Roosevelt, and many of the top sites here are related to his life and work, with highlights including his childhood home and a presidential library. Many of the town's historical attractions are connected by the beautiful Hyde Park Trail, and if you're looking for something a little different, you can go for a llama hike at the Clover Brooke Farm or stop by the gallery operated by the Artists' Collective of Hyde Park. 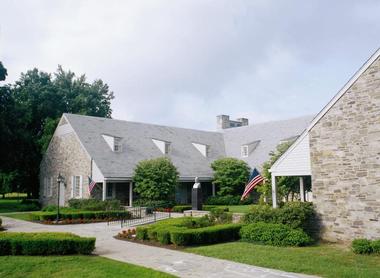 Part of the Springwood estate, the lifelong home of one of America’s most beloved presidents, the Franklin D. Roosevelt Presidential Library and Museum was built under Roosevelt's direction, and it was the first presidential library in the country. The building is home to a large collection of papers and objects that document Roosevelt's life and work, and many of the exhibits have buttons you can press to hear a short audio presentation. Visitors can purchase a ticket that also includes access to the Roosevelt Home. 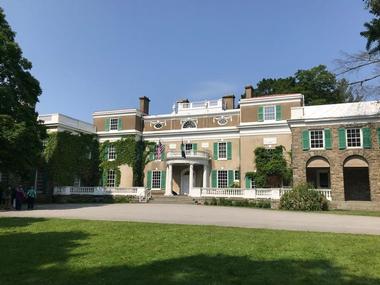 Established in 1945 to protect Roosevelt’s legacy, the Home of Franklin D. Roosevelt National Historic Site is an excellent place to learn about the former president's political and family life. There are plenty of different sights to see here, including the presidential museum, but the highlight for many visitors is the chance to take a guided tour of Roosevelt's childhood home, which is still furnished with much of the original artwork, furniture, and other household objects. The site also encompasses 300 acres of beautiful grounds and gardens, and visitors are welcome to explore the trails at their own pace. 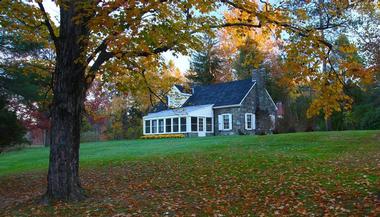 Only two miles away from the Springfield estate, the Eleanor Roosevelt National Historic Site was created to protect Val-Krill, the large cottage that served as the First Lady's permanent home. The surprisingly simple home offers an intimate glimpse at Roosevelt's private and public life, and in addition to taking a guided tour, visitors can browse a fascinating exhibit about her political work. The site is open year-round, but between November and April, the opening hours are limited to five days a week. Tickets sometimes sell out in the summer, but you can make reservations online in advance. 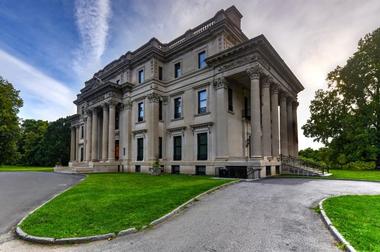 One of several properties formerly owned by Frederick William Vanderbilt, the Vanderbilt Mansion National Historic Site is a spectacular 200-acre estate with landscaped grounds and a 54-room Gilded Age mansion. The mansion itself was built in the late 19th century, but work on the estate began in 1764, and the property serves as an excellent example of the changes that occurred in America after the Civil War. Most of the mansion's rooms are furnished just as they were when the house was occupied by the Vanderbilts, and an hour-long guided tour is included in the price of admission. 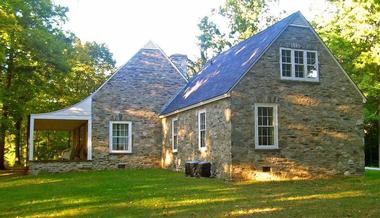 
Constructed in 1938 to serve as the president's private retreat, Top Cottage - Home of Franklin D Roosevelt is located in a rural part of Hyde Park. It was designed by Roosevelt himself, who wanted it to accommodate his needs for wheelchair accessibility, and he often used it to entertain his close friends and political allies. The original furnishings no longer exist, but the cottage has been furnished with antiques and replicas that match the original contents. The cottage is open to visitors between early May and late October, and guided tours are offered three times a day Monday through Friday.

-- You are reading "What to Do in Hyde Park, New York this Weekend" Back to Top


Proudly maintained by a local committee, the Hyde Park Trail is a community trail system with approximately 34 miles of paths to explore. The trails stretch across a number of parks, preserves, and even private properties, but the main stretch is a 9-mile trail that leads from Vanderbilt to Top Cottage, passing by historic sites like Eleanor Roosevelt's Val-Krill, Franklin D Roosevelt's tree plantation, and the Hyde Park train station. All trails are open to the public between sunrise and sunset, and once a year in June there's a 9-mile End2End walk that everyone is invited to join.

Nestled in the beautiful countryside of the Hudson Valley, Clover Brooke Farm is a welcoming family-run farm that offers the chance to interact with animals and learn how a farm works. Their typical tour takes approximately one and a half hours, and visitors will be shown around the farm before heading out on a guided llama or alpaca hike through the farm property. Visitors who have an interest in farming can also take classes in spinning wool, making cheese, and brewing beer, and handmade blankets and other artisan products are available for purchase at the farm store.

Sitting right on the bank of the Hudson River, the Train Station has played a significant role in Hyde Park's community over the years, and it's a great place to get a taste of the area's history. The building was constructed in 1914, and many famous visitors have passed through here, including King George VI, Queen Mary, and Franklin D. Roosevelt. The station is no longer in use, but it's now managed by the Hudson Valley Railroad Society, and although the building itself is closed for much of the year, it hosts a special model train fundraising event each summer.

Housed inside a historic building that was constructed in the late 1700s, the Hyde Park Antique Center is an excellent place to browse for one-of-a-kind treasures. High-quality handcrafted furniture from the 18th and 19th centuries is the specialty here, but there are plenty of smaller items for sale as well, including jewelry, knick knacks, and an entire room full of antique clocks. The center is open every day of the week between 10 a.m. and 5 p.m., and if you don't have time to visit in person, many of their furniture items are offered for sale online.

, Michigan beaches -- "Best Things to Do in Hyde Park, New York for Locals & Tourists - Restaurants, Hotels" Back to Top 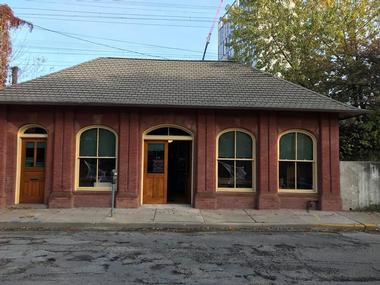 Conveniently located right on Main Street, the Hyde Park Historical Society Museum can be found inside a restored cable car station dating back to 1893. The museum consists of only one room, but it's home to a wealth of objects and artifacts that tell the story of the town's past, with highlights including an old voting booth, photographs donated by local families, and a collection of historic children's toys. The society also sometimes hosts book club meetings with presentations by various authors. 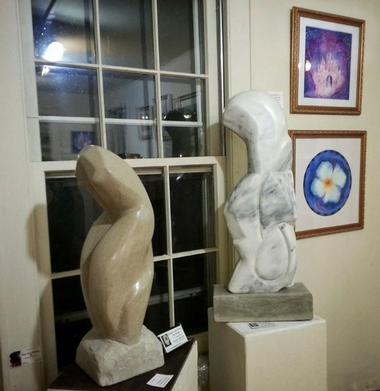 Operated by a passionate group of local artists, the Artists' Collective of Hyde Park is dedicated to supporting the Hudson Valley arts community and promoting its many talented members. The collective's gallery is home to a series of exhibitions that are changed every four weeks or so, and the space is also used to host a variety of different shows and events, including a popular open mic night that takes place once a month. Some of the artists in the collective offer occasional classes and workshops, and new artists are always welcome to apply for a membership.

Set at the confluence of the Crum Elbow Creek and the Hudson River, Hyde Park Landing is one of the original landings on the Hyde Park waterfront, and it offers a convenient place to dock your boat while you're exploring the charming town. Transient mooring is available, but if you're planning to stay for more than a few days, it's worth considering a season's pass. If you don't have a boat, you can still stop by the landing to check out the kiosk project, which was designed to provide information about local attractions and activities for people walking along the Hyde Park Trail. 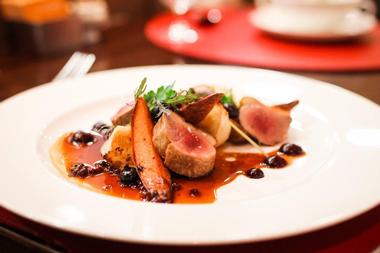 Named in honor of one of France's most famous chefs, the Bocuse Restaurant is a world-class dining venue that specializes in ultra-modern French cuisine. It's located at the Culinary Institute of America, which is fondly referred to as the CIA, and although the menu changes according to the season, it typically features traditional regional dishes given a creative modern twist. There are multiple private dining areas that can be booked for events of almost any size, and from time to time, the restaurant also hosts themed dinners and other special dining events with prix fixe menus. 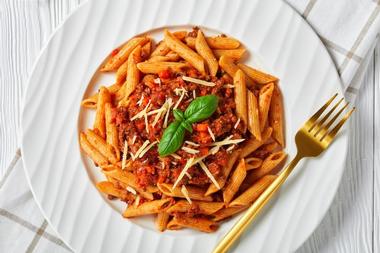 Family owned and operated since 1961, Coppola's Hyde Park is a welcoming restaurant that serves the best Italian food in town. Dishes from southern Italy are their specialty, but the menu has an incredible range of options to choose from, including pizzas, pasta dishes, and all sorts of meat and seafood entrees. Party platters of appetizers, pastas, and entrees are available for take-out. Customers can also purchase the restaurant's famous tomato sauce by the jar, and if you're planning an event you need catered, they can provide a delicious buffet.

14 Best Things to Do in Hyde Park, New York

You are reading "14 Best Things to Do in Hyde Park, New York " Back to Top

14 Best Things to Do in Utica, New York

14 Best Things to Do in Warwick, New York

20 Best Things to Do in Lake George, New York

20 Best Things to Do in New Paltz, New York