10 Best Things to Do in Nags Head, North Carolina 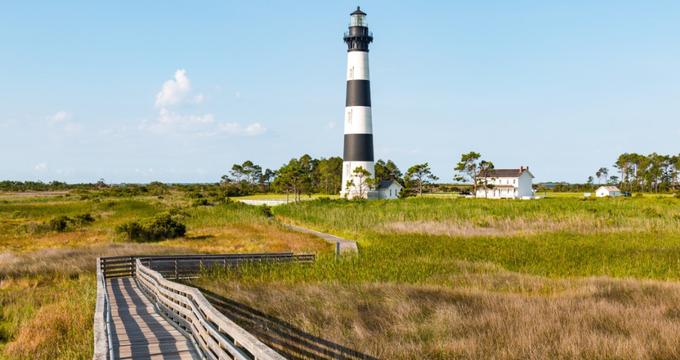 From its beginning back during the 1800’s, Nags Head in the famous Outer Banks of North Carolina has primarily been made up of a few cottage courts, small hotels, and single-family cottages. Today, visitors can still find many historic cottages, predominantly located near Jockey’s Ridge State Park, perhaps the most significant attraction in town with its unmatched views of the town. Nags Head is also full of small family-owned and operated businesses and many restaurants serving some of the freshest seafood in the state. There’s also a thriving art scene, particularly with Gallery Row.

Jockey's Ridge State Park in the popular Outer Banks town of Nags Head encompasses more than four hundred acres and is home to the eastern United States region’s tallest active system of sand dunes. The day-use popular park is made up of three different ecosystems: the maritime forest, the sand dune system, and Roanoke Sound. There is no charge for admission and Jockey's Ridge State Park is open every day of the year with the exception of Christmas Day. Ranger-led programs are offered throughout the year and there is also a visitor center with a boardwalk and museum.

Jennette's Pier in the town of Nags Head, North Carolina offers an excellent banquet facility, youth adventure camps, world-class fishing, numerous wildlife to see, and more. Inside of the pier house, visitors can get face-to-face with a variety of native fish species in one of the large aquariums. Interactive science exhibits provide information about renewable energy. Jeannette’s Pier also features a public bathhouse, wide and clean beaches, and a Pier Shop.

, OH -- You are reading "10 Best Things to Do in Nags Head, North Carolina" Back to Top

The Full Throttle Speedway is a place for people of all ages to experience race day excitement in the Outer Banks. Both kids and adults alike can enjoy a day of go-karting at the speedway, which features Indy-style, gas-powered Go-Karts and two different track styles: the Figure 8 and the Slick Oval. The Go-Kart tracks are able to accommodate as many as twenty racers, which make the Full Throttle Speedway great for families or groups. For younger guests of at least 40 inches in height, there are the Kiddie Karts, which race on their own, not with the adult karts.


The family-owned and operated Seaside Art Gallery is situated within the town’s Gallery Row Art District, only steps from the ocean. The gallery boasts the title of being the first art gallery in the Outer Banks, established in 1961 by the Smith family. It is also one of the Southeast’s largest privately owned art galleries. The expansive Seaside Art Gallery consists of twelve rooms featuring original fine art, including nineteenth, twentieth, and twenty first century master and famed animation art created by Hanna Barbera, Warner Brothers, and Disney, as well as works by internationally and locally known artists in various media.

-- You are reading "What to Do in Nags Head, North Carolina this Weekend" Back to Top


The Blue Moon Beach Grill offers a fun-filled, quirky dining experience in Nags Head, North Carolina. While the restaurant may be on the smaller side, it boasts a big personality, striving to give customers a “once in a Blue Moon experience.” Open daily, Southern comfort food is served here with a touch of flair and a creative twist, while the staff always aim to be cordial and provide guests with Southern hospitality. The menu features many favorite dishes, such as crab cakes, shrimp and grits, and fish tacos, as well as daily creative specials written on the blackboard.

Owens' Restaurant has been a local dining establishment in the Outer Banks of North Carolina for more than seventy-five years and is still owned and managed by the original family that founded it. Highlights of the menu include the freshest shellfish and seafood, whole Maine lobster, pasta, ribs, and aged tender Angus beef, as well as some homemade outrageous desserts. The restaurant’s decor features artifacts given to Owens’ by longtime fans and friends, local history items, and family heirlooms. With artifacts connected to the area’s maritime past and a variety of seafood, Owens’ captures the spirit of the coast.

Basnight's Lone Cedar Cafe, like many restaurants in Nags Head, specializes in local and fresh seafood, including some of the area’s freshest oysters from the waters of North Carolina, as well as shrimp, crab, clams, and fish. Along with delicious food, guests at the Lone Cedar Cafe can also enjoy warm and friendly hospitality and panoramic views of the Roanoke Sound. The restaurant also takes pride in being a “green restaurant” by focusing on local foods and helping keep the environment clean. In addition to serving North Carolina seafood, vegetables are sourced from farms within the state as well.

Sam & Omie's Restaurant is about as authentic as a restaurant can get in the Outer Banks. The family-owned and operated small restaurant at Milepost 16.5 of Beach Road first opened its doors to the Nags Head community back in 1937 as a place where fishermen could get breakfast before heading off to catch fish. Sam & Omie's Restaurant still has an old Outer Banks cottage feel and look with walls lined with old scenes of Nags Head and photos of fishermen proudly displaying their large catch, wood plank floors, low wood ceilings, beadboard walls, and Carolina blue cushions.

, Michigan beaches -- "Best Things to Do in Nags Head, North Carolina for Locals & Tourists - Restaurants, Hotels" Back to Top

The Dunes Restaurant serves local, fresh seafood just how customers like it, including oysters, shrimp, crabs, and an array of fish. Along with lunch and dinner every day, the local eatery also offers “big breakfasts.” The fruit and breakfast bar is loaded full of fresh fruit, creamed chipped beef and sausage gravy, baco, grits, eggs, and a variety of homemade pastries. Since 1982, the Dunes Restaurant has been a local favorite for its southern, locally inspired cooking and its friendly atmosphere. The restaurant also includes a full bar with ten beers on tap and wine available by the bottle or glass.

10 Best Things to Do in Nags Head, North Carolina

You are reading "10 Best Things to Do in Nags Head, North Carolina " Back to Top