11 Best Things to Do in Red Bank, New Jersey 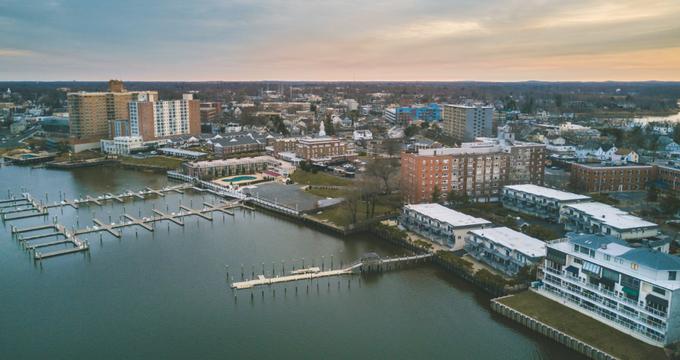 Sometimes referred to as the “Greenwich Village of the Garden State,” Red Bank in the state of New Jersey is full of eclectic cuisine, a vibrant arts scene, trendy stores, bistros, restaurants, and more. Situated only five miles aways from the ocean along the Navesink River, the town is an ideal stop on the way to the beach. The arts and music scene is one of the main draws of Red Bank, home to the Two River Theater and the Count Basie Theater. The town also has its own resident brewery in the Red Tank Brewing Company.

The Count Basie Theatre is located in downtown Red Bank’s Basie Center. This historic theater dates back to 1926 and presents more than two hundred shows every year, and is also home to the Count Basie Center Performing Arts Academy. In addition to Count Basie, the theater has hosted several legends like Tony Bennett and James Brown, as well as many other headline performers, such as Jon Stewart, Brian Willson, Jon Bon Jovi, Counting Crows, Bruce Springsteen, and George Carlin. Along with shows, the Count Basie Theatre also offers an array of professional training courses and workshops.

The Two River Theater strives to stay true to its founding principles, bringing a fresh perspective to both world and American classics, along with producing a number of original projects, such as Hurricane Diane and Be More Chill. Every performance season, the Two River Theater hosts many artist residencies, readings, and workshops, as well as the annual Cabaret of New Songs for the Musical Theater, produced in partnership with the Graduate Musical Theatre Writing program of New York University. The theater, which was founded by Robert and Joan Rechnitz in 1994, is easily accessible with several hotels, shops, and restaurants nearby.

The Red Tank Brewing Company is a family-owned and operated craft brewery set on the banks of the Navesink River within the beautiful downtown district of Red Bank, New Jersey. Founded by Lovina and John Arcara, the brewery believes in making craft creations utilizing the highest quality local farm-to-table style ingredients available. Exotic elements and luxury European imports are used to design “masterpieces of aroma and flavor,” enhanced by an industrial, elegantly rustic glamor brought to the Tasting Room. The Red Tank Brewing Company is open to guests from noon until 6:00pm on Wednesdays, Thursdays, Fridays, and Saturdays.

4.Things to Do Near Me: Chetkin Gallery, Red Bank, New Jersey

Founded in 1987 by Carol Lynn and Don Chetkin, the Chetkin Gallery in Red Bank is a gallery for International Fine Art with a special focus on Contemporary European painters. Situated along Wharf Avenue, the art gallery is housed within a historic and charming building in the town’s marina district. The collection of paintings by internationally renowned artists has grown from a few French artists into more than forty artists from England, France, Poland, Spain, Italy, Ireland, Ukraine, Russia, North America, and China.

5.Things to Do in Red Bank, NJ: Dublin House

The Dublin House is a popular local watering hole that dishes up Irish-style eats alongside beer on tap to loyal customers. The pub itself is located within a historic Victorian-style building that has been moved and remodeled several times throughout its existence, which dates back to the 1840s. There is a packed menu available to patrons, but some of the classics and crowd pleasers for newcomers to sample include the Dublin House Burger, the Dublin House Bangers and Mash, and the Irish Surf and Turf. Now when it comes to alcoholic beverages, a good old Guinness beer from the tap is definitely the local favorite, but there are several beers to choose from and a number of cocktails as well.

6.Things to Do Near Me: Bistro In Red Bank, Red Bank, New Jersey

The Bistro in Red Bank is a Red Bank BYO that has been a significant part of the downtown restaurant scene since 1996, keeping techniques simple and highlighting the same passion for using market-fresh ingredients. The bistro features a sushi bar, an open kitchen, and an eclectic menu that offers something for nearly anyone. Options at the Bistro at Red Bank consists of an assortment of sushi, homemade pastas, both classic and artisan thin crust, brick-oven pizzas, and fresh salads. Popular Bistro classics include the Chicken Teriyaki, the Peking Duck Salad, and the Crackling Calamari Salad to name just a few.

7.Things to Do Near Me: Danny's Steakhouse, Red Bank, New Jersey

Danny's Steakhouse offers a delicious meal in the heart of Red Bank, New Jersey and is a great stop before catching a show at the Count Basie Theater or the Two River Theater. The menu here includes appetizers such as Sweet Spicy Shrimp and Filet Spring Rolls, salads large enough to share like the Pear and Gorgonzola Salad, and a variety of entrees, including fresh seafood, ribs, chicken, burgers, grass-fed steaks, filet mignon, and even sushi. Gluten-free options are available as well, along with a Happy Hour at the bar.

The Monticello at Red Bank is an Italian restaurant with a philosophy of “from the vine to the table.” The local eatery promotes clean eating and aims to provide guests tasty dishes made with the freshest and best ingredients possible. Since 2015, the Monticello has used ingredients from their on-site organic garden, available between June and October. Open six days a week, the restaurant specializes in non-processed, non-GMO food and all of the produce and meats used are premium quality, including all-natural pork, wild caught fresh seafood, free-range eggs, degreased and homemade all-natural stocks, and antibiotic-free, hormone-free chicken.

, Michigan beaches -- "Best Things to Do in Red Bank, New Jersey for Locals & Tourists - Restaurants, Hotels" Back to Top

When it comes to historical and cultural sites to visit in Red Bank, the T. Thomas Fortune Cultural Center is at the top of the list. The center exists to conserve the legacy and home of T. Thomas Fortune, a celebrated African American journalist and civil rights advocate who was born into slavery and later freed in 1863 by the Emancipation Proclamation. Because of its affiliation with African American History, the Fortune Home was designated a National Historic Landmark in 1976 and was later placed on the National Register for Historic Places. Visitors to the T. Thomas Fortune Cultural Center can see beautiful works of art and peruse educational exhibits about T. Thomas Fortune and his contributions to the civil rights movement as well as journalism. Tours and presentations can also be enjoyed alongside movie screenings, readings, and other similar events.

Speed across a premier ice rink with tons of history at the Red Bank Armory Ice Rink. Interestingly, the ice rink was, once upon a time, a military training site and armory. It remained a military facility up until 1988 and was even home to calvary and various mechanized units. The armory was later sold to a private buyer in 1998 and soon after was converted into the beloved ice rink that the locals know it to be today. Open to all ages, the rink is available for public skating, figure skating, and ice hockey. Beginners to the ice and skates can take classes which are regularly held at the rink and can be booked ahead of time.

Test your mettle and your teamwork at Trap Door Escape, an escape room gaming experience that is perfect for team-building activities or just a fun night out with friends. Trap Door Escape features several experiences, all of which are booked ahead of time and are private experiences for you and your party to enjoy. Some of the available themes include a journey to the top of Everest to find a missing research team in Everest, a search for a mythical beast in Best Caves, and tracking down Jack the Ripper in the Ripper of London room. For adults, Trap Door Escape is also home to a distillery that serves up tasty spirits to enjoy while working through the escape room’s many puzzles and riddles.

12.Things to Do in Red Bank, NJ: The Dining Room at the Molly Pitcher Inn 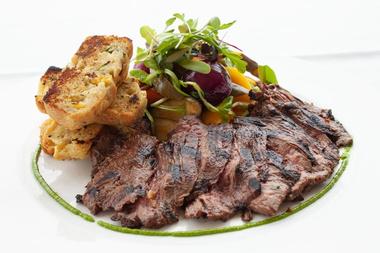 © The Dining Room at the Molly Pitcher Inn

Dine on contemporary American cuisine while enjoying fabulous panoramic vistas of the Navesink River at The Dining Room at Molly Pitcher Inn. The Dining Room, helmed by executive chef Jason Zimmermann, is a beloved gastronomic jewel within the historic Molly Pitcher Inn and is known for its ever-evolving and ever-changing menu. The reason for the menu’s constant changing is the utmost care that the restaurant puts into its ingredients and produce – choosing to use only what is seasonally available and fresh in local farms, or what is available to them in their herb garden. Come by for The Dining Room’s famed Sunday Brunch, which has been winning awards since 1996, or try other classic favorites like the Seafood Pot Pie or the recently added Bloody Mary Oyster Shooter.

11 Best Things to Do in Red Bank, New Jersey

You are reading "11 Best Things to Do in Red Bank, New Jersey " Back to Top

16 Best Things to Do in Trenton, New Jersey

5 Best Things to Do in Avalon, New Jersey

9 Best Things to Do in Ocean City, New Jersey