6 Best Things to do in Grand Haven, MI 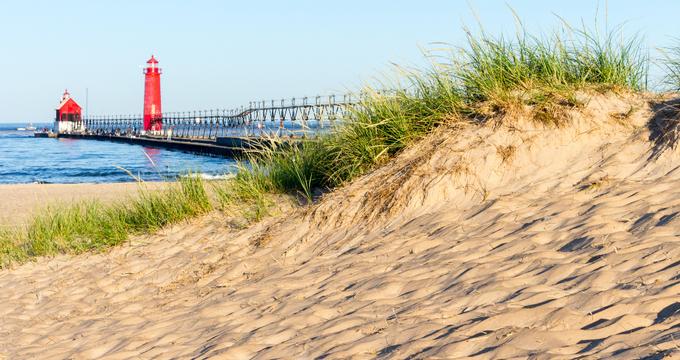 Grand Haven is a city in Ottawa County, Michigan, on the eastern shore of Lake Michigan. It is known for its spectacular sandy beaches. A boardwalk runs along the harbor to Grand Haven State Park beach, lined by shops and eateries. The south pier is home to the historic 1839 Grand Haven Lighthouse. The Grand Haven Musical Fountain features light and water shows, with special shows on holidays. There is a hiking trail in Rosy Mound Natural Area that has spectacular lake views as it winds through wooded dunes. Escanaba Park is a memorial park commemorating the loss of the cutter Escanaba and its 101 crewmen during the World War II. 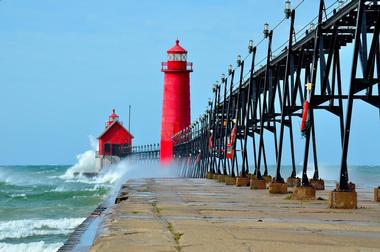 Established in 1839, Grand Haven Lighthouse consists of two lights on the south pier in Grand Haven, Michigan, both painted red and connected by a lighted catwalk. The catwalk also connects them to the Grand Haven Boardwalk and to the shore. The inner light has cylindrical shape. The foghouse or outer light is perched on a huge concrete foundation. The boardwalk along the Grand River channel and the pier are very popular strolling destination for tourists, and the Grand Haven lighthouses are among the most photographed lighthouses in Michigan. The Grand Haven pier is also a great spot for fishing and enjoying the sunset.

Grand Haven State Park is a 48-acre popular recreation area on the shores Lake Michigan. It is located on the south side of the harbor in Grand Haven, Michigan at the mouth of the Grand River. The entire park consists of beach sand. It has a 174-site campground, a rental house, fishing pier, picnicking area, and kids’ playground. It offers magnificent views of the Grand Haven South Pierhead Entrance Light and Inner Light. The park, called "The Oval" by the locals, was originally a 35-acre public beach but the state deeded to the park twenty-two acres closest to the pier In 1920. The park is very popular swimming and beach destination in the summer.

Escanaba Park is a memorial park in Grand Haven, Michigan. Previously called Kelly Memorial Park, the park was renamed Escanaba Park in commemoration of the loss of the cutter Escanaba and its 101 crewmen during the World War II. Cutter Escanaba, with the home port in Grand Haven, was called into the World War II on convoy duty in the North Atlantic. On June 13, 1943, she sunk following a massive explosion aboard, with the loss of 101 of the 103 crew members. This was a huge loss for the city of Grand Haven. After the memorial for the lost crew the Kelly Park was renamed Escanaba Park in their honor.


The Pere Marquette 1223 is a historic steam locomotive on permanent display in Grand Haven, Michigan. Built in 1941 by the Lima Locomotive Works, 1223 hauled freight between Toledo and Chicago in the years before and after World War II. It was retired from service in 1951. After retirement, instead of being scrapped as planned, she was repainted and moved for display at the state fairgrounds in Detroit. The money for the move was collected by school children in the Detroit Area. In 1981 it was moved to Grand Haven with the help of the Michigan National Guard and Grand Trunk Western and Chessie System railroads. The 1223 has been cosmetically restored, but it was considered too expensive and time-consuming to restore it to operation. 1223 was added to the National Register of Historic Places .


In 1949 Gus Fricano founded Fricano's Pizza Tavern in Grand Haven, the first pizzeria in Michigan. Located in a former 19th century boarding house, Fricano’s is today a beloved landmark and its pizzas are still considered the best thin crust pizzas in Michigan. Not much has changed at Fricano’s since its early days. Homey, family-friendly pizza parlor has traditional red and white tablecloths and serves only pizzas and drinks that go with it. There is a nice selection of beers and wines and a full bar. There is only one style and one size pizza - The Original 12 inch Thin Crust Pizza Pie with Italian Sausage, Pepperoni, Mushroom, Green Pepper and Anchovy. You can also have it without anchovies. No gluten-free crust, no deliveries.

6 Best Things to do in Grand Haven, MI

21 Best Things to Do in Detroit (Michigan)