6 Best Things to Do in Crisfield, Maryland 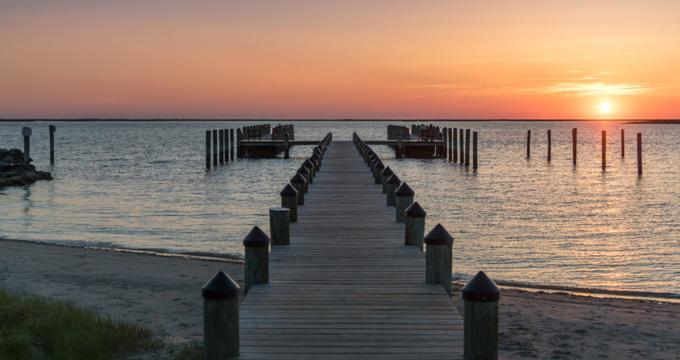 Crisfield is a charming Somerset County city located along the banks of the beautiful Tangier Sound, known as the "Seafood Capital of the World" for its delicious seafood restaurants and daily catch markets. The city has become a major tourist destination on the Chesapeake Bay today, hosting annual special events such as the National Hard Crab Derby. It is best known as the gateway to lovely Smith Island, one of the Chesapeake's most unique unincorporated communities, which sells Maryland state cake Smith Island Cake at a variety of restaurants and bakeries.

Janes Island State Park is a lovely public recreation area located along the waters of the Chesapeake Bay, opened to the public in 1963 and overseen by the Maryland Department of Natural Resources. The park, which sits adjacent to the city of Crisfield, is home to over 30 miles of marked water trails for canoe and kayak explorations, stretching along seven miles of white sand beachfront along the shores of Tangier Sound. A boat launch is offered onsite at the park, along with half-day and full-day canoe and kayak rentals. Opportunities for fishing and crabbing abound throughout the region's shorefront. A plethora of overnight accommodations are offered onsite, ranging from a 100-site primitive campground to fully-stocked log cabins sleeping up to six people.

Tangier Island Cruises depart from Crisfield daily between mid-May and mid-October, exploring some of the most gorgeous scenery of the Chesapeake Bay and Tangier Sound regions. Cruises travel to the picturesque island of Tangier, once visited by Captain John Smith in the 17th century. Its land, which has remained largely unchanged since the late 17th century, is home to descendants of notable American families such as the Crocketts and Pruitts. Cruises meander for 14 miles out to the island, showcasing marine life and waterfowl that inhabit the bay's waters. Tour guides elaborate on the history of the bay's beautiful island destinations, including nearby Fox and Watts Islands and Port Isobel. On the island, visitors can explore a quaint historic district and view preserved sites such as the island's one-room schoolhouse.

Somers Cove Marina is a lovely marina in Crisfield, overseen by the State of Maryland as a full-service boating facility for area visitors and residents. The marina is located directly on the waters of the Chesapeake Bay, offering opportunities for boating, fishing, and sailing along the waters of the Tangier and Pocomoke Sounds. It offers 515 boat slips in a safe, secluded setting, along with a full bait and tackle shop and stainless-steel fish cleaning stations. The marina's full-service bar and sandwich shop, the Red Shell Shanty, serves up overstuffed sandwiches, blue crab entrees, and fresh fruit crush drinks.

, OH -- You are reading "6 Best Things to Do in Crisfield, Maryland" Back to Top

Smith Island is one of the most famed island destinations within the Chesapeake Bay, located approximately 12 miles off the coastline of the city of Crisfield. The island, which was first charted in modern times in 1608 by Captain John Smith, is one of the region's oldest English-speaking areas today, known for its unique regional relic dialect and accent, which retains characteristics of British Colonial speech patterns. It is known around the world for its delicious Smith Island cake, which evokes the flavor and taste of Prinzregententorte and showcases up to 15 thin creme-filled layers, sold in varieties like chocolate, lemon, strawberry, and coconut. Attractions on the island include the Smith Island Museum, which showcases exhibits on the region's social and cultural history, while restaurants include the famed Bayside Inn, known for its traditional American family-style fare.

-- You are reading "6 Best Things to Do in Crisfield, Maryland this Weekend with Friends" Back to Top

-- You are reading "6 Best Things to Do in Crisfield, Maryland this Weekend" Back to Top


The Pizza Shoppe has been a favorite dining destination on the Chesapeake Bay since 1993, operating three locations in Crisfield, Marion, and Westover. The restaurant is known for its delicious fresh dough pizzas, which are prepared fresh onsite daily and available deep dish, thin crust, or hand-tossed style. Specialty pizzas range from Philly cheesesteak pizzas to the Iron Man, which is topped with broccoli, mushrooms, spinach, and fresh tomatoes. Strombolis and calzones are also served up, along with quesadillas, wrap sandwiches, hot and cold subs, and chicken wing platters. Family-friendly specials are available throughout the day, including specialty children's menu items. The restaurant also caters many of the region's biggest annual events, including Baltimore's Artscape and Ocean City's Spring and Sun Fests.

6 Best Things to Do in Crisfield, Maryland

You are reading "6 Best Things to Do in Crisfield, Maryland " Back to Top

5 of the Largest Cities in South Carolina

7 Best Things to Do in Murrells Inlet, South Carolina