15 Best Things to Do in Cave City, Kentucky 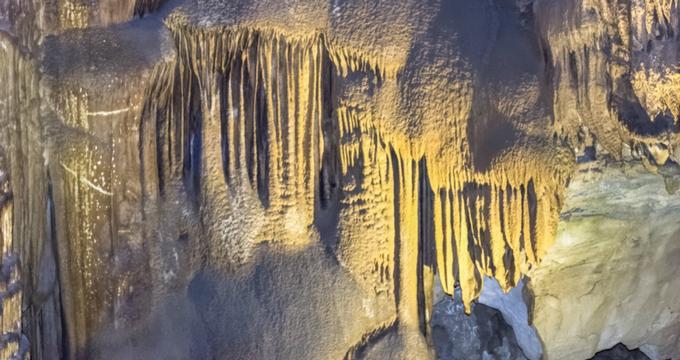 Amid the gentle rolling hills of Central Kentucky lies Cave City, a small town of approximately 2,000 people. Cave City is a unique tourist destination in that it offers visitors two areas to explore. There are shops, restaurants, museums, and other attractions on the surface. Below the surface lie hundreds of miles of shallow caves that cross the Kentucky landscape. Visitors can view rock formations, underground rivers, and caverns thousands of years in the making. Here are the best things to do in Cave City, Kentucky.

Diamond Caverns is open year-round and offers guided tours daily on a first-come, first-served basis. The tour covers a distance of one half-mile and showcases beautiful limestone rock formations and calcite drapery deposits. The cave is lighted with state-of-the-art white lighting. The tour does cover over 300 stairs, so wearing comfortable and supportive shoes is recommended. Diamond Caverns also offers a sluice mine where children can pan for gemstones. Diamond Caverns is adjacent to Mammoth Cave National Park. There is also a RV resort and golf club next to the property. Diamond Caverns is closed on major holidays. 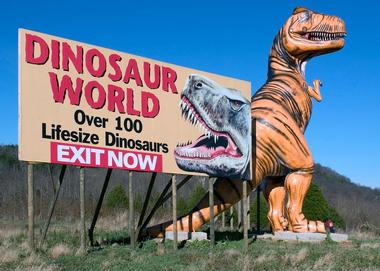 At Dinosaur World, children and adults can walk among dozens of life-sized dinosaur replica statues and play on the dinosaur themed playground. The park also contains a fossil dig, where children can dig through the sand for treasures such as small fossils and shark teeth. At the Bone Yard, guests can use brushes to extract a large skeleton from the sand. Children can also pan for gems in the mining sluice. The on-site prehistoric museum contains displays of real fossils and information about the pre-historic history of the area. Books, games, geodes, and other treasures are available for purchase in the park's gift shop.

Onyx Cave, discovered in 1971, was opened for tours in 1973. It is a wet cave where underground water is actively creating beautiful formations for guests to view. Stalactites, stalagmites, columns, flowstone, cave coral, and layered mineral deposits known as “cave bacon” can all be found here. Onyx Cave is open year-round and is a comfortable 60 degrees at all times. The tour lasts approximately 30 minutes and is an easy walk for tourists of all ages. Next door is the Onyx Cave rock shop where visitors can purchases rocks, fossils, and books. 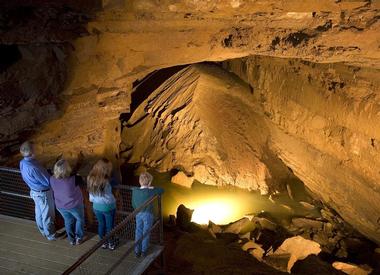 As its name implies, Hidden River Cave contains two subterranean rivers that once provided power to the town of Horse Cave, Kentucky. The cave and the power plant have been preserved, and today they can be toured daily. Longer, guided cave tours are available but must be booked in advance. Above ground, guests can learn about the history of the cave and the geology and archeology of the local area in the American Cave Museum. Beautiful cave rocks, geodes, and fossils are available for purchase in the museum's gift shop. You can also do an exciting zip-line tour and vertical cave rappelling challenge on-site.

-- You are reading "Fun Things to Do in Cave City, Kentucky this Weekend with Friends" Back to Top


Kentucky Action Park is the place to go for outdoor family fun. Children and adults alike can enjoy miniature golf, go carts, bumper cars, and the quarter-mile long Alpine Slide. At the Jesse James Stables, guided horseback rides throughout the 500-acre park are offered daily, March through November. The park also contains a zip-line, rock climbing wall, and a large trampoline. On-site cabins with full bathrooms and small kitchens are available to rent, so visitors can spend the whole day and night at the park. Campsites with water and electric hook-ups are also available.

-- You are reading "What to Do in Cave City, Kentucky this Weekend" Back to Top

6.Kentucky Down Under Adventure Zoo 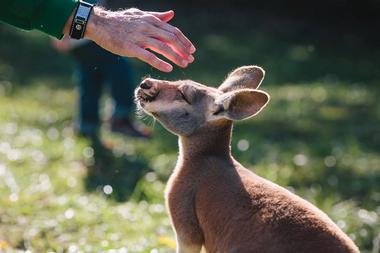 © Kentucky Down Under Adventure Zoo


Kentucky Down Under is a zoo and park located off of Interstate 65 near Horse Cave. The zoo features animal species from Australia such as kangaroos, emus, kookaburras, and dingoes, as well as familiar species from North America such as bison, foxes, and arctic wolves. The zoo also has a large collection of exotic birds, including cockatiels, macaws, parrots, and lorikeets, which guests can feed by hand. The entrance to Onyx Cave is located inside the park, and the brief, easy walking tour of the cave is included with park admission. Kentucky Down Under Adventure is open daily except on major holidays.

-- You are reading "Top Romantic Tourist Attractions in Cave City, Kentucky" Back to Top 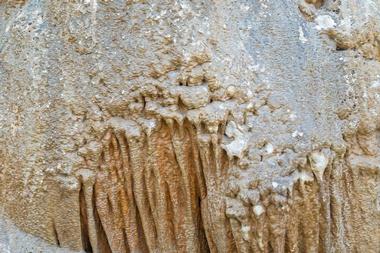 The Mammoth City Wildlife Museum is a 14,000 square foot gallery that hosts an impressive collection of taxidermy animals and preserved insects and marine life. Guests will see real, preserved animals such as lions, leopards, bears, deer, sheep, and tigers. The museum also has a large insect collection as well as many stuffed birds. The wildlife museum is open daily, with extended hours in the summer.

-- You are reading "What is There to Do with Kids in Cave City, Kentucky" Back to Top

The rolling hills and natural rivers and streams of Kentucky make it an excellent place for kayaking and canoeing. Green River Canoeing offers canoe and kayak rentals and shuttle service to and from the Green River. Trips go through Mammoth Cave National Park and range in length from a few hours to a few days. Boaters can view woodland scenery, beautiful river bluffs, and native Kentucky wildlife, all from the water. Camping is available along the river, and fishing without a state license is allowed inside the park. Reservations are required for overnight trips.

Mammoth Cave Adventures is home to the only zip-line canopy tour in central Kentucky. Guests can take in 60 acres of the Kentucky wilderness from two separate courses while reaching speeds of up to 40 miles per hour. The park also contains Kentucky's only vertical free-fall tower, the Mammoth Cave Drop Tower, and a 40-foot giant pendulum swing. For the less adventurous, one-hour guided horseback rides through the nearby forests can also be purchased here. Tours may be cancelled in inclement weather.

-- "Best Things to Do in Cave City, Kentucky for Locals & Tourists - Restaurants, Hotels" Back to Top 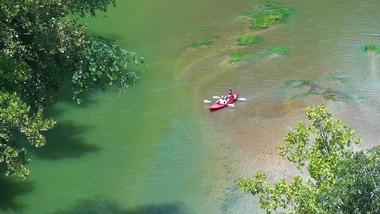 One of the best ways to view the beautiful forests and hills of Mammoth Cave National Park is by boat. Mammoth Cave Canoe and Kayak offers boat rentals and transportation to the Green River, which winds throughout the park, and trips ranging from four hours to three days are also available. All trips are easy in difficulty and contain no rapids. Native Kentucky animals such as deer, squirrels, chipmunks, turtles, and more can all be seen from the water. Float trips are offered daily, and no reservation is required except for large groups.

Froggett’s Guntown Mountain blends the new with the original in a seemingly perfect mix, adding some new features to make the attraction more modern and fresh while still maintaining its original “Wild West' theme. The Haunted Hotel is the first attraction visitors come to at the mountain base of this Western theme park, designed for all ages. This is the country’s oldest haunted attraction “of its kind.” Froggett’s Guntown Mountain also includes an interesting and unique Wild West Town with staged gunfights, as well as a variety of shows like the Stunt Show, Country Music Show, and the Can-Can Show.

-- "New cool stuff to do in Cave City, Kentucky" Back to Top or Romantic Getaways 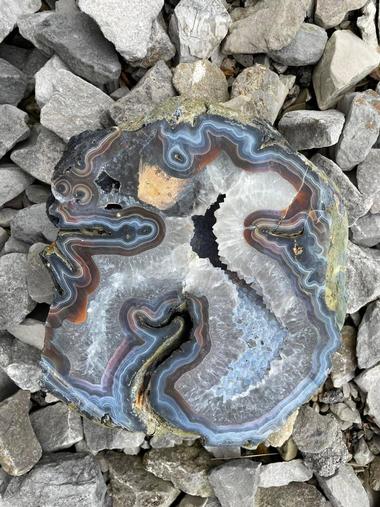 Big Mike's Rock and Gift Shop specializes in old-fashioned fun and high-end rocks in Cave City, Kentucky. The fossil specimens, crystals, and rocks visitors will find in this unique shop are great for even the most seasoned collectors. This selection is also ideal for first-time buyers who want to assemble an excellent selection of rocks, minerals, and other items to start their collection. Guests can take pictures with the huge Mosasaurus, the site’s roadside attraction, as well as see the real skull of the "Big Mo" Mosasaurus. There’s also the Mystery House for visitors of all ages to tour. 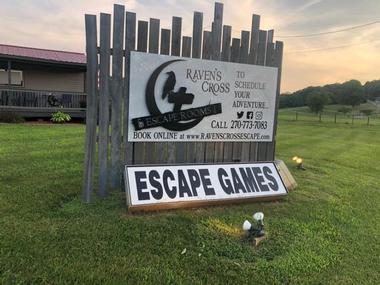 Raven's Cross Escape Games is a place where friends, families, and even coworkers can have both a challenging and fun experience in Cave City, Kentucky. In one such experience, participants will find themselves in a cabin belonging to their “favorite mystery writer,” a writer who was missing for thirty years and has been declared “legally dead.” Guests then have one hour to find clues and solve puzzles in the medium difficulty level escape room known as The Final Chapter. Raven's Cross Escape Games also has more difficult escape room experiences for guests wanting to challenge themselves more, like The Nautilus Incident. 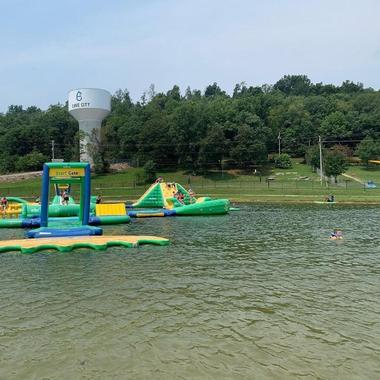 Karst Beach in Cave City is located on the grounds of the Mammoth Cave YOGI BEAR'S Jellystone Park. Opened in 2018, this sandy beach is set on the shores of a lake a little more than two acres in size. The beach area features Witbit, a 1,300-square-foot inflatable sports park; a small slide; inflatable loungers; and volleyball as well. Karst Beach also has corcls, which are small boats that look a bit like upside down frisbees and are a favorite attraction among guests at the beach. Along with the variety of activities, Karst Beach includes the Huckleberry Knob retail store. 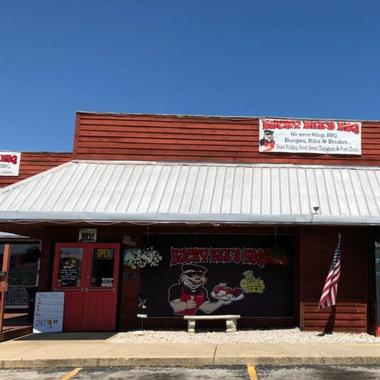 Bucky Bee's BBQ, opened by local Cave City area residents Sheila and De’Lynn Buckingham. After having a dream of their own restaurant for years, Bucky Bee’s BBQ opened its doors to the community on New Year’s Day in 2016. The name of the local restaurant comes from De’Lynn Buckingham’s days of playing high school and college sports. His agility and speed on the football field earned him the nickname of “Bucky B.” The menu at Bucky Bee's BBQ includes brisket, ribs, burgers, an array of barbeque dishes, wings, pork chops, fried green tomatoes, fried pickles, and more.

-- You are reading "15 Best Things to Do in Cave City, Kentucky" Back to Top or Amazing things to do around me

15 Best Things to Do in Cave City, Kentucky

You are reading "15 Best Things to Do in Cave City, Kentucky " Back to Top

20 of the Fastest Roller Coasters in the World

21 Best Places to See the Northern Lights in Alaska

25 Best Places to Visit in Wyoming