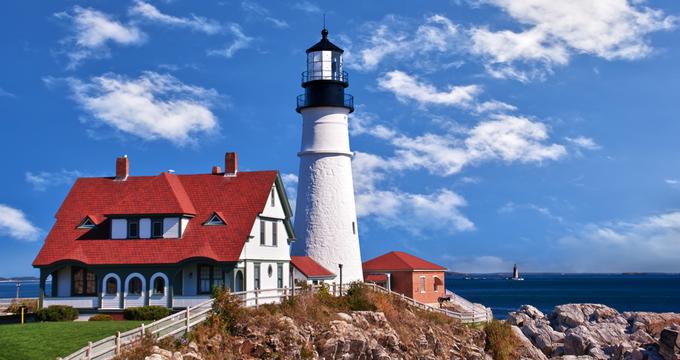 Explore Maine's most beautiful lighthouses, including the scenic Portland Head Light leading into Portland Harbor, Bass Harbor Light in Acadia National Park, and West Quoddy Head Light at the easternmost tip of the United States. Some ME lighthouses can only be admired from afar while others are interesting museums where you can spend a fun afternoon with kids. Here are the best Maine lighthouses. 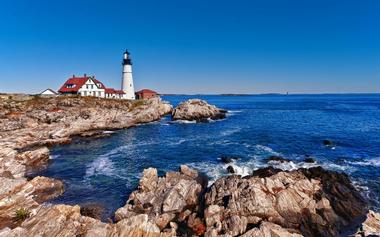 Portland Head Light is a lighthouse built in 1791 at the entrance to the main shipping channel leading into Portland Harbor in the Gulf of Maine. Located in Cape Elizabeth, the lighthouse is the oldest lighthouse in Maine. Originally, whale oil lamps provided illumination, but a Fourth Order Fresnel lens replaced them in 1855.

The light station is still functioning and automated, and the maintenance of the beacon, tower, and foghorn is the responsibility of the US Coast Guard. The former home of lighthouse keepers is today a maritime museum and a part of the Fort Williams Park. 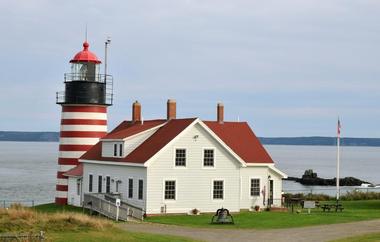 The original lighthouse tower was replaced in 1858 with the characteristic circular 49-foot high brick tower with distinct red and white stripes that is active to this day. Its old-fashioned Third Order Fresnel lens is one of few Fresnel lenses still used on the Maine Coast. West Quoddy is registered in the National Register of Historic Places. 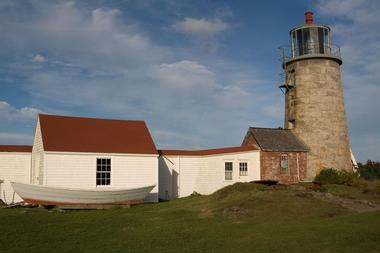 In 1850 the old stone tower was replaced with a 30-foot granite block circular tower. Monhegan Island Light is registered on the National Register of Historic Places. The lighthouse now houses the Monhegan Museum and showcases exhibits of the island's history. The lighthouse light is still operating and is managed by the Coast Guard.

Standing high on the cliff like a sentinel overlooking the endless sea, Bass Harbor Light is a lighthouse in Acadia National Park. It is located in the village of Bass Harbor to mark the entry to Bass Harbor on the south-western coast of Mount Desert Island. The lighthouse was built of break in 1858 on a foundation of stone. It is 56 feet high above the water level.

The tower and a fog bell were added in 1876, and in 1898 the bell was replaced with a much bigger 4,000-pound bell. The original lens was a Fifth Order Fresnel, replaced in 1901 by a Fourth Order Fresnel that ranged 13 nautical miles. The lighthouse is part of the National Register of Historic Place. Tours of only the lighthouse tower can be arranged through the Tremont Historical Society.

5.Lighthouse near me: Cape Neddick Light


A classic example of an American lighthouse,The Cape Neddick Lighthouse is a true American icon. Its photo is included in the list of most important Earth structures that the Voyager spacecraft carries just in case it falls into the hands of extraterrestrials. The lighthouse has been standing on Nubble Island since 1879 and is popularly known as Nubble or Nubble Light.

It is located less than 100 yards from Cape Neddick Point in the picturesque village of York Beach at end of Long Sands Beach. The tower is covered with solid cast iron and lined with brick. It is 41 feet tall but because it was erected on the steep rocky islet, the light’s total height is 88 feet above sea level. The lighthouse is not accessible to visitors and can be seen from a distance. More Maine vacations

6.Lighthouse near me: Whaleback Lighthouse


Whaleback Light is a stone lighthouse perched on a rocky outcrop off the coast at the mouth of Piscataqua River between Fort Foster and Wood Island in Kittery, not far from the Maine-New Hampshire border. The original lighthouse has been built in 1820, but, due to its poor construction and the rough weather conditions in the area, it had to be replaced with a new one in 1872.

The new tower, which is still standing, was constructed with interlocking granite blocks next to the original tower, which was taken down in 1880. The light is 59 feet above sea level. A modern LED light was installed in 2009. The current owners of the lighthouse are he American Lighthouse Foundation and Friends of Portsmouth Harbor Lighthouses.

It originally had a Second Order Fresnel lens but was automated in 1980 after a storm damaged the light and washed away all surrounding buildings. The US Coastal Guard installed the new solar beacon,and they are today in charge of the lighthouse operation. The lighthouse is not open to the public.

, From LA -- You are reading "10 Best Maine Lighthouses" Back to Top

The lighthouse was built in 1897 next to old Fort Preble and had a fog bell and a lantern with a Fifth Order Fresnel lens. It was electrified in 1934. A 900-foot breakwater was built in 1951 to connect the lighthouse and the mainland. Since it opened to the public in 1999, the lighthouse has become a popular tourist destination.

Originally, the lighthouse used kerosene Incandescent Oil Vapor lamp, which was replaced with a 282 prism Fresnel lens together with a 1,000-watt high-powered electrical bulb. The light can be seen for more than 20 nautical miles. It is the only First Order Fresnel lens still used in Maine. Seguin Light is registered on the National Register of Historic Places and is open to the public.

Often considered one of the seven wonders in North America, The Bay of Fundy is located in New Brunswick, Canada. Home to some of the rarer whales on the planet as well as the highest tides and frequent findings of rare dinosaur fossils and semi-precious minerals, the bay is a must see for anyone wanting to experience the full beauty the world has to offer.

The Bay of Fundy is located at the halfway point between the north pole and the equator on the east coast of Canada. It was declared as the place on earth with the highest tides by the Guinness Book of World Records in 1975 and is a protected tidal ecosystem and world geological site.

Although many tourists choose to just experience the bay on their own time without a schedule, there are a few more structured experiences that have been reported to be favorites of visitors.

One of those is Island Quest Marine. This boat tour will lead guests around the highlights of the bay by sea, allowing them to actually experience the tides themselves. There are also world class sighting potential of both rare whales and other wildlife. Boats will travel past small islands in the bay that are alive with birds, before showing them aquaculture-based fish farms and herring weirs.

For guests who want a more specific whale watching tour, there is the Petit Passage tour. Run by a local man with over twenty years of whale finding experience, guests will be taken out to a place that has the highest likelihood of successful whale watching.

Visitors wanting to learn more about the history of the area are encouraged to stop by the Avon Heritage Museum, located on the shores of the Avon River. The museum introduces guests not only to the area but also to the history of shipyards and the importance of the water in the local economy.

As the Bay of Fundy is mostly known for its high tides, guests should make sure to follow a few special steps in order to see the tides the best they can. The very best area in the bay to experience the tides is at the ecozone (which is the world’s highest). This area is located around the upper basins in two separate areas. There are two both low and high tides during each 24-hour period in the bay, with just over 6 hours between them. Make sure to check the calendar before visiting to see exactly when to be present to view this natural phenomenon.

One other unique attractions at the Bay of Fundy is the Cliffs of Fundy, a geopark that sits on nearly 200 kilometers of land that spans from the Apple River to the Portapique River. This park claims to have over 40 different geo sites.

There are also a variety of guided tour experiences that vary from the usual structured tour. Guest can take a “freewheeling” tour that is offered by bicycle, a “roads to the sea” tour, or a Gael tour. Each tour takes guests through a unique portion of the bay and allows them to learn about the history of the area from a unique perspective.

The Fundy National Park is home to a variety of special events throughout the year, meant to draw guests in with both fun and education. There are frequent art exhibitions and open houses, as well as annual events like world fish migration day in April. There are also many concerts and musical events held in the park.

Free Admission Day is offered in June. Guests are offered free admission to celebrate the people who were native to the area, and activities will revolve around education regarding their history and culture.

In August, guests often love to come for the Rising Tide Festival. This fest blends art and music with the amazing natural scenery by asking guests not only to enjoy the arts but also create their own alongside internationally known artists. Workshops are offered as well.

For sports lovers, there is a golf tournament held in September, as well as a 50-kilometer run later that same month. October brings Bike Fest, and winter sporting activities are held seasonally as well.

There are many dining options located around the bay, including cafes like The Flying Apron and nicer, sit down restaurants like Wild Caraway. Guests of all hunger and taste levels will be able to find something in their budget. There are also a wide variety of shopping options, from larger chain stores to local boutiques and souvenir shops.

You are reading "10 Best Maine Lighthouses " Back to Top

15 Best Things to Do in Belfast, Maine