Things to Do in Florida: Miami Seaquarium 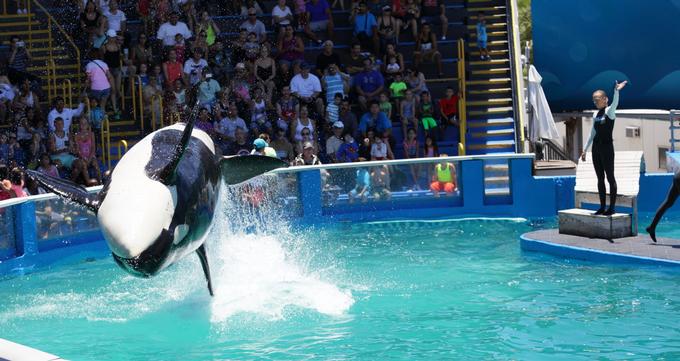 The seaquarium has had a focus on preservation, conservation and education since its origin in 1955 when the first manatee was rescued and rehabilitated. The seaquarium is committed to the rescue, rehabilitation and release of marine animals. Known as a Manatee Critical Care Facility for its services, the park has rescued manatees, dolphins, whales and sea turtles since its beginnings. Within the park is a 24/7 animal rescue team containing animal caretakers, divers and veterinarians on call.

For private parties and events, the seaquarium can be rented along with its facilities. There is a special tent and field which are reserved for such private hires. Birthday and slumber parties are hasted at the park as well as corporate events and weddings.

Penguin Isle is an exhibit with African penguins, a 9000 gallon pool and a 900 square foot dry area with rocky terrain. Surrounded by acrylic windows, visitors can watch the penguins behaviour and walk through the swimming tunnel, underwater. Since 1955, the park has displayed the Shark Channel Exhibit. At this exhibit the Shark Presentation reveals the feeding habits of the sharks whilst visitors can learn about the various species and their habits. The Manatee Exhibit contains endangered Florida manatees which have been rescued and rehabilitated by the park. Visitors can see the manatees swim and interact with each other through the underwater viewing areas.

Further exhibits are the Crocodile Flats exhibit featuring Nile crocodiles and the Tropical Wings Exhibit featuring Flamingos, Cockatiels and other tropical birds. The park also has two aquariums, the Tropical Reef Aquarium containing stingrays, eels and small tropical fish in a 750,000-gallon saltwater tank and the Tropical Fish Aquarium located in the walls of the Top Deck Dolphin Area. Inside are lobsters, red lionfish and many more animals.

Other aquatic exhibits are the Touchpool Seal & Sea Lion Feeder Pool where seals and sealions play and swim together and the Stingray Exhibit located in the Tropical Wings Exhibit. The stingrays are housed in a 10,000 gallon pool where visitors can touch them and watch them feed.

The park has a series of live animal shows within specially built arenas. Visitors can see water displays between marine animals and specially trained staff as the see the Carribean themed Flipper Dolphin Show, the Golden Dome Sea Lion Show with the Reef Rangers and Salty the Sea Lion, the Killer Whale and Dolphin show and the Top Deck Dolphin Show with bottlenose dolphins.

Other attractions are Sharky’s SkyTrail aerial adventure where visitors can climb the aerial adventure course 32 feet above the ground and Salty’s Pirate Playground, a pirate ship with two levels and both a wet and dry play area. Discovery Bay is a mangrove of wildlife complete with Sea Turtle Exhibit displaying 5 species of endangered turtles.

The park offers a range of tickets, encounters, swims and passes. There are 12 to choose from, such as a Smart Day Ticket, a Dolphin Encounter, Seal Swim, Annual Pass or Smart Day Ticket. Additionally, the Trainer for a Day program means visitors can pay to be a trainer with a dolphin for the day. Visitors can also purchase a VIP tour which is an interactive program lasting 2.5 hours with a personal guide and the meeting and feeding of animals.

The seaquarium has a range of educational programs which run throughout the year. For schools and educators there are a selection of field trips for Kindergarten age groups to 12th Grade. Upgrades such as school lunches and Sharky’s SkyTrail access can be added on. Field trips include viewing the Orcas at the Educational Orca Whale Presentation, a visit to the Conservation Outpost and Penguin Isle and the Reef Rangers Program hosted by an instructor. A Marine Science/Conservation Outreach Program can be arranged to visit school classrooms too. Further programs are Girl Scout Programs, Homeschool programs, and seasonal camps.

Back to: Miami, FL