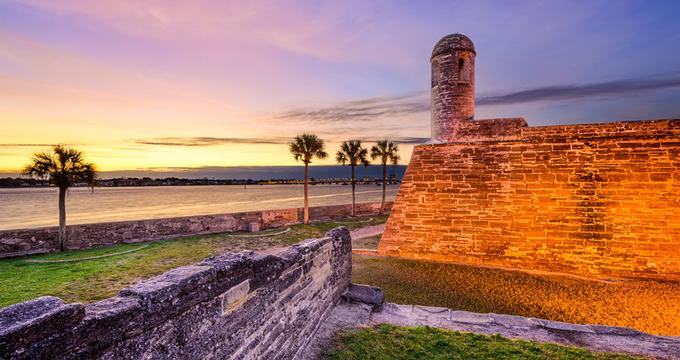 Castillo de San Marcos on Matanzas Bay in St. Augustine, Florida is the oldest masonry fort in the United States and a designated National Monument spot by the US National Park. The 17th century military fortress was originally built by Spain as a military outpost standing watch over the Atlantic Ocean. Its primary function was to safeguard the colonial power’s New World Empire against foreign rivals such as Great Britain.

The fortress is also a living testament to the long history of St. Augustine as the oldest permanent European settlement in the continental United States. Spaniard Don Pedro Menendez de Aviles founded the city in 1565, establishing it as a political, military, and religious center of the then-province of Florida.

Throughout its more than 200 years of colonial history, the location has weathered multiple battles and attacks. It served as a military base for six flags, namely the Spanish Empire, the British Empire, the Confederate States of America, and the United States of America. Each of these transfers was negotiated through treaty and agreement and never through force.

Today, the monument spreads across more than 20 acres of land and is a highlight for all visitors to the city. Despite the various damages sustained and renovations undergone through the years, the fort has been largely restored back to its original state in 1756. This includes a reconstructed section of the walled defense line that used to surround the city. Certain attractions may be temporarily closed or require advance reservations. Hours/availability may have changed. 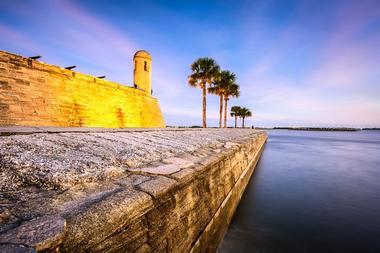 For the best views of the Castillo’s overall layout and its surroundings, climb up the stars to the upper gun deck. The fort has a distinct star-shape architectural design consisting of four diamond-shape bastions named San Augustin, San Carlos, San Pablo, and San Pedro. The bastions typically feature thick walls packed solidly with rubble and sand to offer extra support for withstanding the weight of the cannons.

The bastions are connected by four walls known as “curtains,” and together, they form the artillery fortification. This design served defensive and offensive purposes in the age of gunpowder warfare. While capable of withstanding the impact from cannon projectiles, the fortification is also effective for mounting and firing cannons at potential intruders. As of 1740, the fort had more than 70 cannons of varying sizes, and the largest of them could fire up to three and a half miles.

One reason that the fort has managed to survive through numerous blasts and attacks is due to the use of coquina, a semi-rare sedimentary limestone found in northeast Florida. The Castillo was built with more than 400,000 blocks of coquina, and its outer walls were as thick as 1 -feet. As a building material, coquina is light and porous which helps the fortress cushion the impact from cannon projectiles rather than shatter under pressure. Even up until today, round dents could still be seen in the external walls, which are evidences of the coquina’s shock-absorbing abilities.

For many visitors, one of the highlights of their visit is the historic weapons demonstration that takes place every Friday, Saturday, and Sunday at the gun deck. Rangers and volunteers dressed in period costumes will re-enact scenes from the colonial era, including the firing of cannons, which is a dramatic and entertaining sight to behold. Although the cannons used for demonstrations are reproductions, many originals are exhibited throughout the facility. Look out for the positioning of the cannons in the bastions. They are placed strategically, just as they would have been during the Spanish period, to illustrate how the layout was designed to ambush the enemy in artillery crossfire.

The entrance leads to the ground floor of the fortress. Centrally located is the Plaza de Armas, or central courtyard, that served two main functions under the Spaniards. On a daily basis, it was used for conducting military drills and cannon procedures, and during wartime, it was designed to be a place of refuge for the town’s people. This was the case in 1702 when the town came under siege by the English. Almost 1,500 soldiers and civilians took refuge inside the fortress for 51 days.

Many of the rooms surrounding the courtyard were used as warehouses to store food and military supplies such as gunpowder, ammunition, and tools. Given that St. Augustine was not self-sufficient, these stockpiles were critical defense mechanisms during periods of siege. Visitors can enter some of these casemates to understand how the function of these rooms changed during the different chapters of its history. 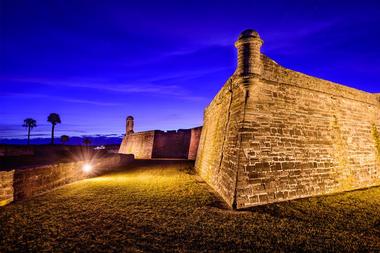 One of the casemates highlights remodeling efforts that were made during the First Spanish Period. After the 1702 siege, the interior of the Castillo underwent a redesign to better cope with future sieges. The rooms were made deeper, and vaulted ceilings were installed to replace the wooden square roofs. These changes were supposed to better insulate the rooms from bomb attacks in order to protect the supplies inside. Furthermore, more cannons could be placed all around the gun deck and not just at the corner bastions as per the original design. This boosted the Castillo’s ability to defend itself and the city.

The overlapping designs in the powder room are a perfect example of how much the fortress has changed throughout its different historical phases. The small narrow room found at the back of the room was the original gunpowder magazine between 1675 and 1687. To protect it from enemy fire, it was situated under the San Carlos bastion so that thick coquina walls would surround it, and it became the only room before the re-modification to have a vaulted ceiling. Yet the lack of ventilation made the room too humid to store gunpowder, and the room was later sealed. During the Second Spanish Period between 1784 and 1821, the room was converted to artillery quarters. A neighboring casemate also became a storage room for keeping tools and materials needed to serve the cannons.

Britain gained control of the Castillo from Spain in 1763 during an exchange for Havana, Cuba. During their 21 years of rule, they made changes to eight of the casemates in the Castillo. The display shows how one of these rooms would look like during that period. Rooms with higher vaults were remodeled so that wooden second floors could be installed to increase the amount of usable space for living quarters and storage of supplies.

This expansion of space became even more important during the American Revolution from 1765 to 1783. St. Augustine became the capital of what was then known as East Florida, where the majority of the population pledged loyalty to the British as compared to their counterparts in West Florida. During that period, the fort became the regimental headquarters for the area and housed up to 500 British soldiers inside.

You are reading "Things to Do in St. Augustine, Florida: Castillo de San Marcos" Back to Top 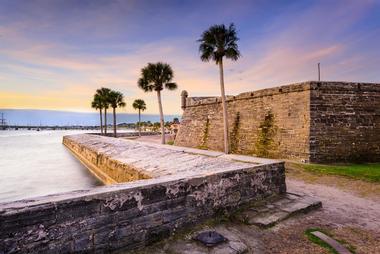 Look west beyond the high walls of the fort and there is a replica of the Cubo Line that used to surround the city. It was built after the 1702 siege when the British burned parts of St Augustine. In response, the Spanish built the wall made out of earth and palm logs as well as a shallow moat to protect the city. Today, parts of the wall as well as one of the city’s gates have been restored.

On the eastern front, there is a cluster of cannons the US Army mounted between 1842 and 1844 along the sea wall. The water battery was meant to bolster its overall coastal defense system. When Spain ceded Florida to the US government in 1821, the Castillo was renamed Fort Marion and the storerooms were converted into prison cells for Seminole Indians. Near the cannons is a shot furnace that resembles a brick oven. It was a typical defense structure found in many forts at that time. Soldiers would heat up non-explosive cannonballs in the furnace until they turned red-hot. The hot shot was then launched at the enemy’s wooden warships and equipment so that they would catch fire and halt the ships’ advances.

You are reading "Things to Do in St. Augustine, Florida: Castillo de San Marcos" Back to Top

You are reading "Things to Do in St. Augustine, Florida: Castillo de San Marcos " Back to Top

25 Best Places to Visit in Florida

25 Best Things to Do in Kissimmee, Florida