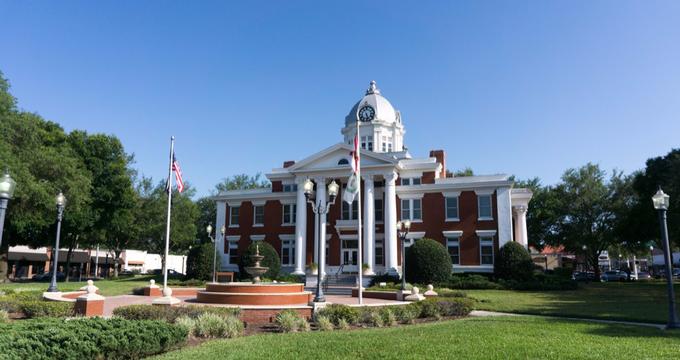 Dade City, FL is a small town in Tampa Bay area, about an hour's drive from Tampa, with charming historic downtown full of antique shops, boutiques and restaurants. One of the town’s landmarks, the 1909 Pasco County Courthouse, is a magnificent Classical Revival style historic building. The best play to learn about the town’s rich history is to visit the 16-acre Pioneer Florida Museum, with a number of historic structures and a museum with everyday objects that illustrate the way of life of Florida pioneers. Dade City has two zoos, an open space Giraffe Ranch and more traditional Wild Things. TreeHoppers Aerial Adventure Park is the Central Florida’s largest aerial adventure park.

Giraffe Ranch in Dade City, Florida look like something from Out of Africa: massive live oaks and vast open grasslands stretching in the distance , with elegant giraffes grazing peacefully. This unique 47-acre working ranch about 45 minutes north of Tampa specializes in exotic animals that live in the environment that is as close to their natural one. The ranch also raises horses and cattle. They offer tours of their ranch, observing giraffes as they roam free, to small groups of tourists. The tours they offer can be on camelback, from a four-wheel vehicle, by Segway or even with llamas. There are two tours a day, led by expert guides. The ranch is also a native wildlife preserve and is home to about 200 sandhill cranes . Visitors are invited to feed giraffes, pet camels and get close to rhinos, pygmy hippos and other animals from all over the world.

-- You are reading "11 Best Things to Do in Dade City, Florida" Back to Top 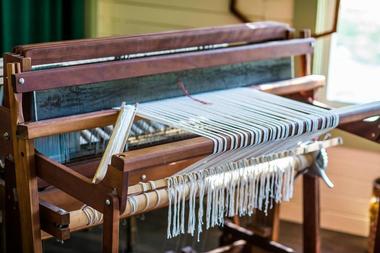 Pioneer Florida Museum and Village is an open-air museum in Dade City, Florida that was established in order to showcase the simple values of Florida pioneers, the dignity of hard labor and the value of fine craftsmanship. The museum is located on 15 acres of forested land and includes the restored 1864 Overstreet House, a church from Enterprise, a 100-year old one-room school from Lacoochee, the Trilby depot, and an old train engine. Museum’s exhibits are housed in the in a 50' by 100' steel building with a wide front porch. On display are common tools of the Florida pioneers and a number of displays showing how pioneers used to build a house, made furniture, plow fields, harvest crops, and did leather-work and blacksmithing.

-- You are reading "11 Best Things to Do in Dade City, Florida" Back to Top 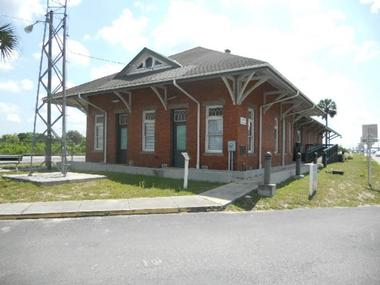 Housed in a beautifully restored vintage 1912 train depot, the Dade City Heritage and Cultural Museum offers fascinating guided tours to anyone interested in the historic Railroad heritage of Dade City. The city was originally established as a small rural railroad town to serve the Atlantic Coastal Railroad, and the museum preserves and showcases many objects which have stories to tell about the old days in Dade City. The museum maintains a section of active railroad track and hosts regular special train-related events. There is also a large model railroad laid out in the Train Room where you can enjoy watching a collection of vintage model trains on the move.

Located in Dade City, Florida, about half hour drive from Tampa and Orlando, SCREAM-A-GEDDON is an independent horror park that consists of six spectacular haunted houses. In between the houses, visitors can have some innocent fun such as go on a hayride, make s’mores at a campfire, enjoy inevitable cotton candy or play zombie paintball. Each attraction has its own storyline. There are actors dressed like characters from "Fallout" and "BioShock" who intimidate visitors. The attractions are interactive and visitors can have their own personal experiences. Bedlam 3D is an asylum for glow in the dark skeletons that pop up and shout. In Blackpool Prison, inmates have overtaken a prison and visitors have to try to make it out alive. If they want to play active part, they have to wear a glow stick necklace. In Dead Woods, visitors are traveling through the woods in a swamp in the dark.

-- You are reading "Fun Things to Do in Dade City, Florida this Weekend with Friends" Back to Top


At Christmas, the tree is the centerpiece of the celebration. For almost 30 years, Ergle Christmas Tree Farm has been a holiday tradition for Central Florida families. Choosing that special tree at Ergle Christmas Tree Farm with the whole family creates memories that last a lifetime. They offer a variety of fresh trees - potted, pre-cut or visitors can cut their own Cedar, Sand Pine and Carolina Sapphire. There are also fresh wreaths and Christmas Cactus. The farm also grows hydroponic strawberries and u-pick blackberries, and blueberries. They also sell fruit plants and fruit trees. Kids can visit barn animals – there are goats, pigs, turkeys, dogs and more.

-- You are reading "What to Do in Dade City, Florida this Weekend" Back to Top

6.Things to Do in Dade City, Florida: Pasco County Courthouse


One of the city landmarks, the 1909 Pasco County Courthouse is a historic building in Dade City, Florida. The magnificent Classical Revival style structure was designed by noted architect Edward Columbus Hosford and is listed the U.S. National Register of Historic Places. The county’s first courthouse was built in 1887 by H. W. Coleman and W. A. Ferguson. They donated space to the county to build a temporary structure until a permanent one, the one we have today, could be erected. There is a recent Valentine's Day tradition in Dade City, where the Pasco County Clerk officiates a complimentary wedding ceremony on the steps of the Historic Pasco County Courthouse.

-- You are reading "Top Romantic Tourist Attractions in Dade City, Florida" Back to Top

Located in Dade City, just north of Tampa, Florida, TreeHoppers Aerial Adventure Park is the Central Florida’s largest aerial adventure park. It has dozens of zip lines, rope bridges, eight different courses and more than 100 aerial climbing elements. It is a fascinating family adventure suitable for all ages. It consists of a series of platforms between the trees connected by wood, cable, rope and zip lines, each forming different elements. Each element creates a different challenge - how to get to the next platform. The trails are color-coded depending on the level of difficulty, from Little Lemurs, suitable for kids from one to six years old, to really challenging courses for experts. All participants wear a safety harness attached to the safety line at all times. The courses are designed for self-discovery, making introductory lessons unnecessary, but park monitors and guides are watching and available to assist at any time.

-- You are reading "What is There to Do with Kids in Dade City, Florida" Back to Top

Located in downtown Dade City, Florida, Kafe Kokopelli occupies a 1916 old red-brick, vine-covered building built as a Model-T Ford Sales and Service center. It was home to the prominent local Ford dealers until the mid-1970s. The building was renovated to house a 150-seat restaurant and two banquet rooms, the Cypress Room and The Citrus Room, decorated with the wall murals with pictures of Florida life in East Pasco County. The restaurant décor is very rustic, with exposed brick walls and ancient beams on the ceilings, with hunting trophies everywhere, creating atmosphere of a cozy hunting lodge. The menu is New American and has a wonderful selection of appetizers, salads, sandwiches and entres. There is a full bar. Brunch is a popular local event.

© A Matter of Taste

A Matter of Taste has been a staple in Dade City, Florida since 1990. Cozy and unpretentious, it is welcoming and bright. The menu reflects the diversity of cultures and culinary heritage of the Tampa Bay Area. Greek, Spanish, Cuban, Italian, and Southern dishes create unique menu and a unique dining experience. All food is made from scratch daily from freshest possible ingredients. There is something for everyone, from Angus burgers and fried green tomatoes to a range of quiches, Green gyros and Cuban sandwiches. Breakfast is served whole day. There is a small selection of beers and wines.

, Michigan beaches -- "Best Things to Do in Dade City, Florida for Locals & Tourists - Restaurants, Hotels" Back to Top 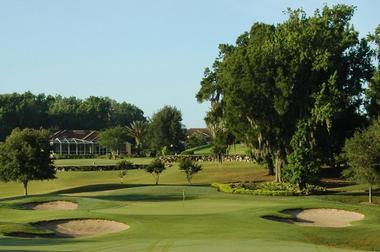 Located just north of Tampa, the Lake Jovita Golf and Country Club is home to two of the most popular golf courses in Florida. On the beautiful South Course you can tee-off on a verdant, manicured course edged by decades-old mature trees. Both the front and back nine have a fair amount of water hazards which call for some accuracy off the Tee and around the greens. The North Course features less water but also offers an enjoyable and challenging round for players of all abilities. There is a great clubhouse with Grill Room and bar and vacation villa-rental Play and Stay packages are available. 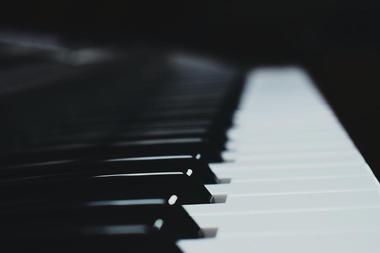 On a mission to encourage and promote performing and visual artists, HACA has made it possible for hundreds of promising artists to reach for their dreams. The association strives to promote the arts through hosting live performing arts shows, musical concerts, art competitions and much more. In order to raise funds to continue their essential work in the community, the association produces several shows each year and visitors are invited to check their website for details and to book their tickets online. Their annual Spotlight on Talent program runs from February to March each year – visitors are very welcome to attend all the live auditions.

-- "New cool stuff to do in Dade City, Florida" Back to Top or Romantic Getaways

You are reading "11 Best Things to Do in Dade City, Florida " Back to Top

25 Best Things to Do in Fort Lauderdale, Florida