11 Best Things to Do in Frankenmuth, Michigan 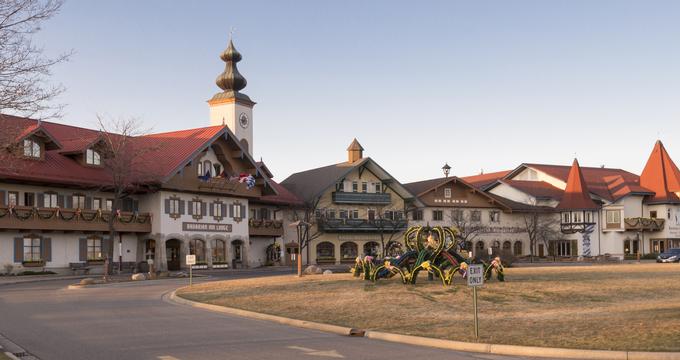 Frankenmuth brings a taste of Bavarian-style hospitality, cuisine, and fun activities to the heart of Michigan. Take in the sights from the Bavarian Belle Riverboat, shop at the "World’s Largest Christmas Store", visit Michigan's Military & Space Heroes Museum, and explore many other unique attractions on your weekend trip. Here are the best things to do in Frankenmuth, Michigan. CDC information for travelers. Hours/availability may have changed. 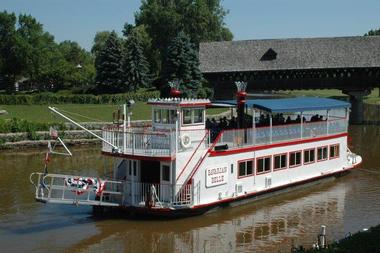 The Bavarian Belle Riverboat is an authentic, family-operated riverboat that offers tours of the Frankenmuth area on the beautiful Cass River. Docked at the waterfall in the River Place Shopping Village, the fully restored 150-passenger vessel features an open-air canopied upper deck and a fully enclosed lower salon with modern restrooms, as well as a snack bar that serves soft drinks during the cruise.

Guests can enjoy a one-hour historical tour of the Frankenmuth area narrated by local experts. The tour is offered from Monday through Sunday from 11 am to dusk. The Bavarian Belle Riverboat also hosts special events and can be booked for private occasions such as birthday parties and weddings. Bavarian Belle Riverboat is one of the best things to do in Frankenmuth, Michigan. 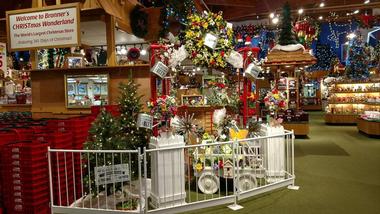 Known as the “World’s Largest Christmas Store,” Bronner's Christmas Wonderland is a year-round retail store that sells a vast array of Christmas-related items, ornaments, decorations, and collectibles. Founded by Wally Bronner in 1945, the store is designed in the form of an alpine chalet, spans 7.35 acres, and is situated in the midst of 27 acres of beautifully landscaped grounds. Bronner's Christmas Wonderland is one of the top Frankenmuth attractions.

Three 17-foot tall outdoor Santa Clauses and a 15-foot snowman stand sentry at the entrance to the building while Bronner's half-mile long Christmas Lane is illuminated with more than 100,000 lights in the evenings. The store’s interiors are packed with more than 50,000 gifts, tags and trims, over 600,000 glass ornaments, and more than 86,000 light sets, all of which are seen by over two million people annually.

Michigan’s Military & Space Heroes Museum is dedicated to showcasing and highlighting the wartime experiences of men and women from the state of Michigan and educating the public about their patriotic service.

The only museum of its kind in America, the Military & Space Heroes Museum features galleries with over 700 exhibits and 140 displays, including the Michigan Governor Gallery, the World War One/Polar Bear Gallery, Michigan's Space Pioneers/Astronaut Gallery, the War on Terror Gallery, and the Congressional Medal of Honor Gallery, which houses the largest collection of Medals of Honor in the United States. The museum also houses original examples of the uniforms and items used by Michigan veterans from America’s seven foreign wars and space program.

You are reading "11 Best Things to Do in Frankenmuth, Michigan" Back to Top

Long weekend getaways with friends near you, weather, best small towns, what should I do in for couples, cheap, with friends, nearby, now, tonight, fun things to do near me: CO, From San Diego, VA, OH, WI, MI, IL, IL, VA, San Diego, TX 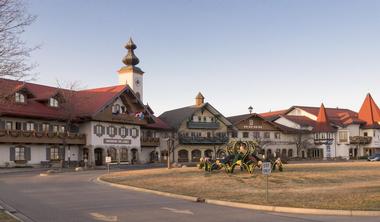 Castle Shops at the Bavarian Inn Restaurant feature an array of unique items in a charming fairytale setting.

Winding cobblestone streets lead shoppers to unique specialty stores such as the Doll & Toy Shop, a wonderland of toys and dolls for children of all ages; the Royal Gift Shop, which features over 5,000 treasures and collectibles, including steins, nutcrackers, and German clothing; and the Candy Corner & Chocolate Shop – a haven of chocolates, fudge and apples. Take a break from shopping and relax over a coffee and piece of chocolate cake at the Castle Shop Bakery.


Founded as The Italian Wine Company in 1921 by Mariano Meconi, St. Julian Winery came into being when Meconi countered rising antifascist sentiment during World War II by changing the name to St. Julian Winery, and in turn, paying homage to the patron saint of his native village Faleria, Italy. St. Julian produces award-winning wines, among them a Sholom Kosher Wine and the highly acclaimed Solera Cream Sherry, as well as over 15 Braganini Reserve wines created using a variety of winemaking styles.

The main winery in Paw Paw offers free tours for visitors, seven days a week, year-round, as well as tastings for a small fee. For the tastings, visitors can try samples from over 40 vintages, including the renowned Braganini Reserve wines, vodkas, and brandies. Enhanced tastings and tours are also available, and they offer guests an extended tour featuring an in-depth education on the wine making process and a choice of a cheese or chocolate pairing option. 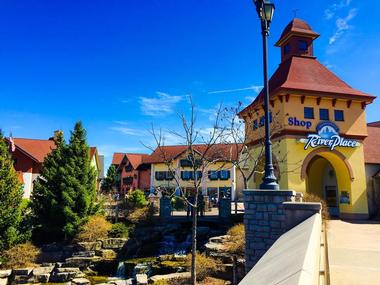 
Designed to recreate an authentic German/Bavarian Village, Frankenmuth River Place Shops is a unique collection of specialty shops, attractions, and fun activities for the whole family. Nestled on the banks of the Cass River in downtown Frankenmuth, the shopping village features beautiful Bavarian architecture, meandering streams and tinkling waterfalls, and an array of restaurants, cafés, and specialty stores selling everything from women’s fashion and leather apparel to toys, accessories, and deli-style food.

You are reading "11 Best Things to Do in Frankenmuth, Michigan" Back to Top 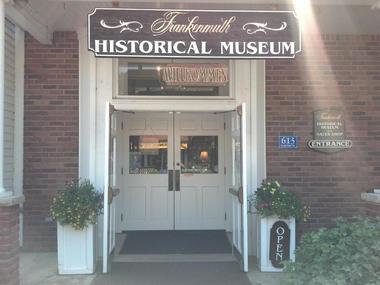 Frankenmuth Historical Museum is dedicated to preserving and celebrating the history and heritage of Frankenmuth. The museum features seven galleries housing an array of hands-on exhibits, displays, audio and video presentations, and various artifacts that tell the story of Frankenmuth’s community, starting with its founding as a Lutheran missionary colony in 1845.

Visitors can explore the museum on self-guided tours or docent-led guided tours where local historians will interpret and discuss the history of this Bavarian-influenced village.

Established in memory of Grandpa Tiny, Grandpa Tiny's Farm is a historic working farm where visitors of all ages can enjoy interactive, hands-on farm activities and experiences on a guided tour. The tour features a visit to the Petting Farm where children can hold and play with chicks and baby bunnies and watch and play with lambs and baby goats (kids), as well as other farm animals.

A narrated wagon ride is part of the package tour, and the wagon travels around the farm, passing the beautiful turn-of-the-century farmhouse complete with an outdoor Backofen, crosses the Dead Creek by way of the historic Black Bridge, and visits the beautiful old one-room schoolhouse. The tour also highlights the importance of the agricultural history of the area, presenting weekly demonstrations of draft horses plowing, planting, and harvesting, as well as other weather-permitting outdoor events. 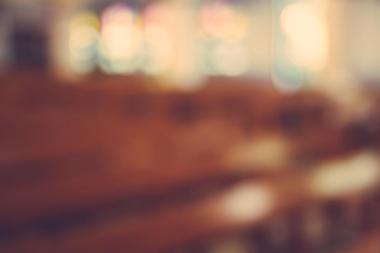 The St. Lorenz Church has a Christian School in which over 500 children are enrolled, providing Christian education from preschool through junior high.

The Frankenmuth Lager Mill is home to a brewing museum and beer store that showcases and celebrates the history and art of craft beer-making in Frankenmuth. The city has enjoyed the age-old tradition of brewing since its inception in 1845, and it boasts a rich and fascinating history that can be explored in the museum through an array of high-quality photographs, artifacts, documents, and videos, as well as a gallery featuring over 2500 pieces of authentic German brewery glassware.

The Frankenmuth Lager Mill also features a store with more than 450 craft beers and brews from around the world with a particular focus on locally crafted Michigan-made beers. The little store also offers beer-themed T-shirts and German clothing, locally produced cigars, wine and meads, and a variety of snacks.

The Fortress Golf Course is an 18-hole, par 72 championship golf course that echoes the traditional Scottish origins of the game. Designed in 1992 by golf architect Dick Nugent, the course spans 6,813 yards and features 75 bunkers surrounded by bent-grass tees, pristine fairways, and rolling and sectioned greens.

Individual putting greens and chipping greens with bunkers are available for players to warm up on while the target-oriented driving range offers long-range swing practice. The golf course’s modern clubhouse offers an array of facilities and amenities, including changing rooms and restrooms, and a restaurant and bar, and a variety of special events, tournaments, clinics, and junior programs are scheduled throughout the season.

11 Best Things to Do in Frankenmuth, Michigan

You are reading "11 Best Things to Do in Frankenmuth, Michigan " Back to Top

8 Best Things to Do in Jasper, Indiana

25 Best Things to Do on Mackinac Island, Michigan

17 Best Things to Do in Cedar Rapids, Iowa

25 Best Things to Do in Milwaukee, Wisconsin