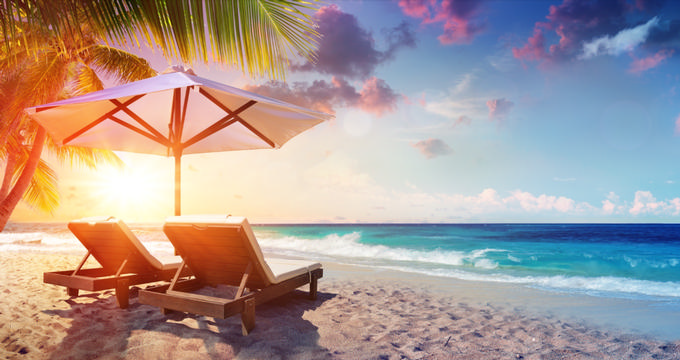 Puerto Rico is home to more than 270 miles of gorgeous unspoiled coastline, known around the world as one of the Caribbean's most beautiful tourist destinations. All of the island's beaches are open to the public year-round, including hot resort areas such as Condado Beach and Maria's Beach. CDC information for travelers. Hours/availability may have changed. 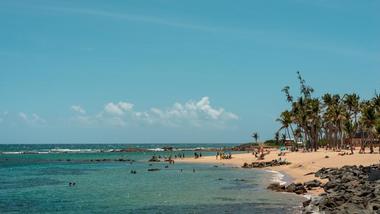 Balneario El Escambrón is one of San Juan's most picturesque beachfronts, offering soft golden sands and turquoise waters surrounded by a spectacular barrier reef. The beach, which is located in Puerta de Tierra within walking distance of the Old San Juan area, is separated into three separate beachfront areas, including its main beach area at Playa 8, which offers ample shade from coconut palm trees. Playa 9, or Bateria El Escambrón, is known as a prime family-friendly spot for its shallow waters, as well as a great launching-off point for snorkelers and scuba divers. On Playa 10, or Playita del Condado, beachgoers can make use of the beach's outdoor gymnasium. The Kiosko El Escambrón serves up Puerto Rican-style delicacies on Playa 8, while a walking trail along the waterfront leads to the historic sites at Bateria El Escambrón.

Condado Beach is a very popular tourist beachfront for San Juan visitors looking for a true Caribbean resort experience, frequently compared to Miami Beach for its world-class cultural attractions and nightlife. The beach, which offers sunny, warm weather conditions year-round, attracts families, collegiate visitors, and celebrities alike at nearby resorts such as Condado Vanderbilt and La Concha Resort. Though the beach's waters are not particularly suited for swimming, families can enjoy calm, safe water conditions and lifeguard staff at the nearby Playita del Condado, part of adjacent Balneario El Escambrón. Water sports abound on the beach's shores, with waiters offering up direct beachfront drink service for many resortgoers. Limited street parking is available nearby, with daily paid parking available at the parking garage at Venta al Mar Park.

Crash Boat Beach, also known as Playa Crash Boat, is a visitor beach located within Puerto Rico's Aguadilla municipality on the site of a former military port used by Ramey Air Force Base. The beach's name is said to be derived from its use by the United States military in World War II, with its dock used to accommodate the Crash Boats Rescue Squadron. Today, the dock remains in use as a popular fishing spot, with two large sandy beachfront areas available for swimmers in designated areas. Excellent surfing, bodyboarding, and sunbathing conditions are offered year-round, with launching-off points for snorkelers and scuba divers available at the pier. Several snack stands sell traditional Puerto Rican cuisine and tropical beverages such as piña coladas, and a beach rental area offers jet ski and motorboat rentals.

You are reading "12 Best Puerto Rico Beaches" Back to Top

Flamenco Beach is a popular public beach on the island of Culebra, a small and sparsely-populated barrier island off the coast of Puerto Rico. The celebrated beach has been ranked as the world's third-best beach by TripAdvisor in 2014 and has been designated as a Blue Flag international beach since 2016. The beach, which is renowned internationally for its gorgeous shallow turquoise waters and pristine white sands, spans a half mile along a horseshoe-shaped bay stretch of coastline and is accessible via ferry from Fajardo or airplane via Luis Muñoz Marin International Airport. Excellent swimming and diving conditions are offered for beachgoers, with ample opportunity for snorkelers and scuba divers to explore coral reefs and marine wildlife. Nearby at Culebra National Wildlife Refuge, visitors can birdwatch or explore hiking trails along the coastline.


Isla Verde Beach is one of San Juan's most popular beach destination spots, home to a wide variety of elegant resort hotels, vibrant nightlife spots, thrilling casinos, and historic sites nearby at Old San Juan. The beach, which is actually made up of three separate connecting beachfront areas in the Carolina area, is framed by gorgeous coconut palm trees and enjoys warm, sunny weather conditions year-round. Opportunities for water activities and beach sports abound, including swimming and jet skiing, though visitors should check water conditions before entering the water, as waters can be rough at times. All three beaches are frequently voted as the best beaches within the Puerto Rico metro area and among the best urban beaches in the United States.

You are reading "12 Best Puerto Rico Beaches" Back to Top


Isla de Vieques is a charming island municipality in Puerto Rico's Spanish Virgin Islands, located approximately eight miles east of the island's mainland. The 20-mile-long island is named for an indigenous Taíno word translating as "small island" and is home to the barrio Isabel Segunda, best known as the site of protests against the island's use as a bombing range by the United States Navy in the 1990s. Today, the former Navy sites have been converted into a national wildlife refuge, which offers several beaches still bearing their Navy designations, including Blue, Red, and Green Beaches. The island is best known as the home of Mosquito Bay, which is widely considered to be the United States' most beautiful bioluminescent bay. Excellent snorkeling conditions are also offered at Blue Beach, while archaeological sites are hosted at La Hueca.

La Pared Beach is a secluded local beach located in Luquillo along the eastern side of the popular Balneario Monserrate. The beach, which is separated from adjacent Playa Azul via the La Pared wall, has experienced recent rejuvenation with the addition of several restaurants and surf shops in the area. A narrow stretch of golden sand is shaded by palm trees, with plenty of space for picnics and sunbathing. Surfers congregate near the wall, with great boogie boarding conditions offered near the shoreline where waves are smaller. Visitors should be advised that the balneario is the only beach in the Luquillo area with lifeguards and should watch out for rip currents while in the water at La Pared.

La Posita Beach is a lovely laid-back beach near San Juan and Isla Verde, offering a respite from some of the region's more heavily tourist-crowded beachfront areas. The beach, which is accessible via a short drive from the San Juan metro area, offers crystal-clear waters and beautiful sandy beachfront stretches, perfect for visitors wishing to stretch out and relax to the sound of waves crashing on the shoreline. Calm water conditions make for great swimming and floating opportunities for the entire family, created by protection from a coral rock wall along the beach's Atlantic Ocean coastline. Many of the beach's food kiosks have been featured on the Travel Channel, serving up delectable chinchorro quick beach bites. Visitors looking for extra seclusion should visit during the winter months and avoid holiday weekends.

La Selva is one of Puerto Rico's most beautiful hidden treasures, only accessible via a 40-minute shoreline hike from La Pared Beach or via 4x4 all-terrain vehicle. The beach is located within the Northeast Ecological Corridor nature reserve at El Yunque, one of the Caribbean's most important leatherback sea turtle nesting sites, and is a great place for spotting turtles, though visitors should exercise caution not to come in contact with animals or nesting sites. Pristine beachfront areas remain undeveloped due to protection via the nature reserve, with ample sandy areas for stretching out and sunbathing or enjoying a secluded picnic. Visitors should note that the beach's water conditions are not safe for entry and should visit other beaches in the Luquillo area for swimming. Drive to the beach can be treacherous due to large rocks and flooded creeks, and the beach's trail is not safe to walk alone at night.

Maria's Beach is Rincon's best surfing spot, originally rising to international acclaim after hosting the 1968 World Surfing Championship, the first televised surfing event shown as part of ABC's Wide World of Sports programming. The beach, which was formerly known as Rincon Point, is now named in honor of Maria Garcia, the original owner of the Maria's luxury oceanfront vacation rental site. Shady palm trees cover the beautiful beachfront, with some of the Caribbean's most exciting and lively waves offered throughout the year. During the summer months, the beachfront is a popular Caribbean tourist destination. Surfing competitions continue to be held at the site periodically, including the 2007 World Surfing Championships.

Mosquito Bay, also known as the Bahía Bioluminiscente, is widely considered to be the most beautiful example of a bioluminescent bay within the United States, designated as one of five National Natural Landmarks within Puerto Rico. The bay's unique neon blue luminescence is created by populations of the dinoflagellate microorganism Pyrodinium bahamense, which glows brilliantly whenever the bay's waters are disturbed. The small channel that is now most associated with the bay was originally created by Spanish ships attempting to choke the bay during colonial times, as the Spaniards believed that the bioluminescence was the work of the devil. Kayaking is permitted within the bay, with rentals and tours offered from a number of local companies.

Seven Seas Beach is one of Puerto Rico's most popular tourist destination beaches, awarded with the prestigious Blue Flag international designation for its high-quality sands, waters, amenities, and environmental accountability. The beach, which is located near the city of Fajardo, is located along a crescent-shaped stretch of pristine waterfront that is lined with beautiful white sands, crystal-clear waters, and exquisite palm trees. Shallow, calm waters make for great swimming and snorkeling conditions, with lifeguards staffed on duty during peak months. Divers can observe a wide variety of marine life along the beach's barrier reef, including sea cucumbers and conches. Overnight camping is permitted for an additional fee, with picnic shelters available for group rental.

You are reading "12 Best Puerto Rico Beaches " Back to Top