Goats in Trees: The Tree Climbing Goats of Morocco 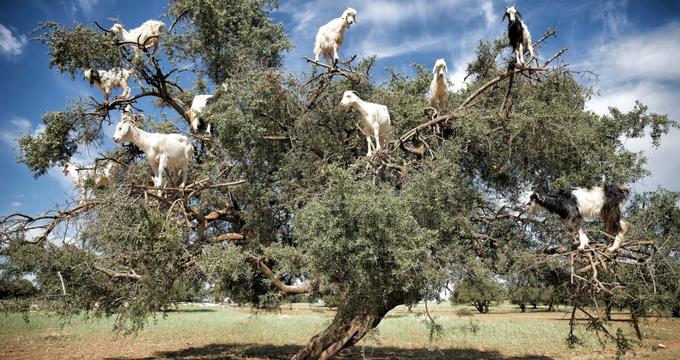 In the arid climate of southwestern Morocco, in the Souss Valley the local goats have become adapted to unique methods of grazing. The famed tree-climbing goats grab their meals as high as 26 to 33 feet off the ground in argan trees. These evergreen trees, also known as Berber for the region in which they are found, are the sole species of the Argania family. The flowering plants are found only in this 8,000-square kilometer area of Morocco, and the oil from their seeds is quite precious. It is used for cooking applications in Morocco, for the dipping of bread, and can be found in some of the world’s most expensive cosmetics. The oil is said to have antioxidant properties and is used as a moisturizer for skin and hair as well as for healing wrinkles, acne scars, and burns. The trees are currently protected as a UNESCO biosphere reserve. As argan oil exports have increased exponentially in the past few years, the economic growth of the area has had good, and bad, effects on the trees themselves. In a strange twist, locals have used their newfound argan oil wealth to purchase more goats. However, the increased number of goats are quickly overgrazing the trees and stunting their growth. Argan trees may live for up to 200 years, and the fruit that surrounds the oil-rich seeds takes more than a year to mature. Farmers now hold the goats back from grazing until the fruit of the tree ripens, then send the hungry goats in to remove the pulp from the seeds. The goats eat the fruit, then spit out the seeds, which the farmers collect. The goats are extremely skilled climbers, and although the branches of the Argan tree are thorny and gnarled, the goats have adapted over the years to reach the highest and most precarious branches. It is not unusual to see upwards of 15 goats in each tree. The goats’ soft cloven feet allow them to cling to the bark and find balance. They have two “toes” and a dewclaw that assists them with grabbing and climbing. The site is quite popular with tourists, and there are several Moroccan tour providers that take day trips to see the tree-climbing goats. CDC information for travelers. Hours/availability may have changed. 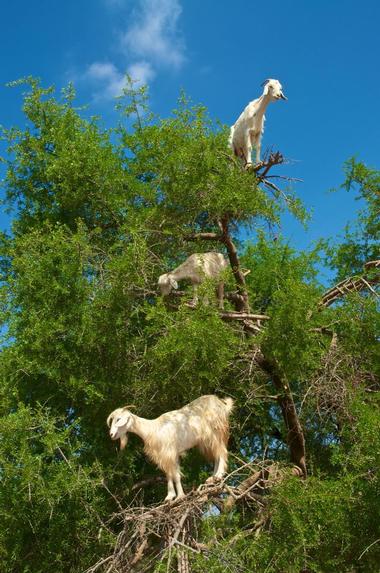 Although the tree-climbing goats are in danger of over-grazing the trees, they are also instrumental in spreading the seeds of the trees. Scientists had assumed that the goats pass and spread the seeds through fecal matter, but it was only recently discovered that the goats actually spit the seeds out. In a recently published research article in the scientific journal Frontiers in Ecology, scientists fed goats various seeds of different sizes, and found that when the seeds were large, as are those of the argan tree, the goats were more likely to spit them out. Goats are not the only animals to do this, other ruminants such as deer have been observed doing this same behavior. And while the seed-spitting goats are new to scientists in Europe, the local Berber people of Morocco have known this for quite some time. It has long been rumored that Berber farmers feed the fruits of the trees to the goats, and then collect the spat-out seeds once the goats have removed the surrounding pulp.

Traditionally, argan oil production was extremely labor intensive, which made exporting the oil cost prohibitive. Today’s argan production is done mostly by Berber women who work in co-operatives. The establishment of the women’s co-operatives, government assistance in building cold-pressing machines, and the certification of the argan trees as organic has all contributed to the increase in argan oil production, in a way which brings money back into the community.

Nevertheless, the trees are still threatened and continue to be protected through the UNESCO biosphere reserve. Through the 1970s and 80s, many of the trees were felled to make way for other crops, and foreign-owned pressing plants took most of the argan profits away from the community. However, much of that has changed in recent years through the efforts of the Moroccan government. Today, argan oil is the most expensive oil in the world, fetching upwards of $300 USD per liter, which makes preserving the argan trees much more appealing for the local farmers.

Goats in Trees: The Tree Climbing Goats of Morocco

You are reading "Goats in Trees: The Tree Climbing Goats of Morocco " Back to Top

17 Best Things to Do in Deerfield Beach, Florida

11 Best Things to Do in Mountain View, AR