11 Best Things to Do in Athens, Alabama 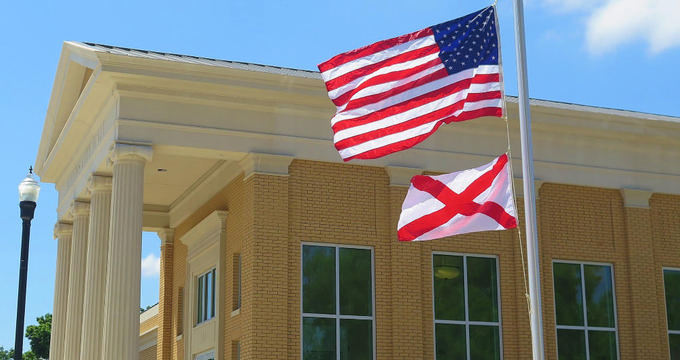 The city of Athens is the county seat of Alabama’s Limestone County. A large number of the city’s antebellum homes and Civil War-era sites have been preserved, making a popular tourist destination for history buffs. The city’s location halfway between the major cities of Birmingham and Nashville along Interstate Highway 65 also makes it a popular day trip or stop-through tourist destination. 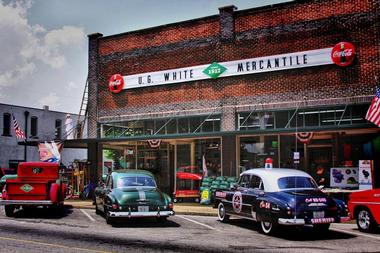 U.G. White Mercantile has been a local institution in the Athens and the northern Alabama region for more than a century, originally opened in 1917 by White Hollow, Tennessee native Ulysses Grant White. The store serves as a major hardware and farming supply company for the region today, offering a variety of high-quality, durable goods and customer service emphasizing the brand’s tradition of Southern hospitality. It is owned and operated by fourth-generation White family members and offers locations in Athens and Huntsville. In addition to industrial and farming goods, the store sells locally-produced food products, including candy sold by the pound. 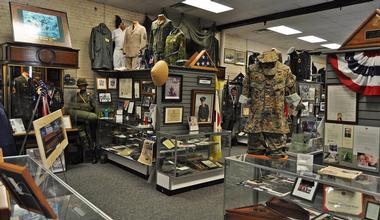 Alabama Veterans Museum and Archives has been voted as one of Alabama’s Attractions of the Year by the Alabama Mountain Lakes Tourist Association, honoring the region’s veterans and military history with a variety of public collections and exhibits. The museum attracts more than 10,000 annual visitors and is housed within the former L&N Freight Depot building. It is open to the public Mondays through Saturdays and displays military-related artifacts such as uniforms, weapons, medals, and photography. Public museum exhibits are showcased within the Bob McAbee Exhibit Hall, including exhibits related to American conflicts from the Revolutionary War through the present-day War on Terror. Archives are also hosted at the Tyler Craig Memorial Library, and public special event programming is presented at the Wendell Powers Auditorium. 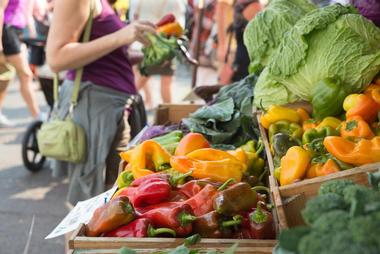 Athens Saturday Market is a state-certified public farmer’s market that is hosted at the city’s Green Street Pavilion every Saturday morning between June and August. The market opens at 8:00am, with goods typically sold out by noon. Its four-point mission aims to increase the region’s local agricultural economy, promote small businesses and artisans, educate the public on healthy, locally-sourced food options, and create a vibrant weekly gathering place for the Athens community. A wide variety of local produce is sold at the market, along with a variety of baked goods, flowers, and specialty items. Artisan market vendors are also showcased on site, along with live music performances, children’s activities, and demonstrations. 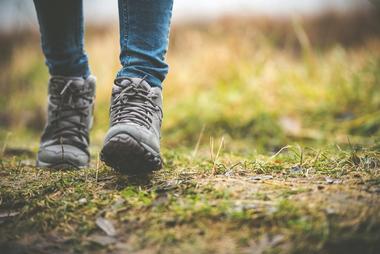 The Richard Martin Trail is a multi-use rail trail that runs through Limestone County, offering 10.2 miles of exploration for hikers, runners, and horseback riders. The trail was constructed in 1992 on an abandoned railway corridor as part of the Rails-to-Trails Conservancy initiative and traverses past sites such as the Civil War-era site of the Battle of Sulphur Creek Trestle. It is named in honor of local citizen and nature activist Richard Martin, who spearheaded the campaign for its creation. In 2010, the trail was designated as a National Recreation Trail. Trailheads are accessible from Veto Road along the Alabama-Tennessee Line at its northern end and Piney Chapel Road in Athens at its southern end. 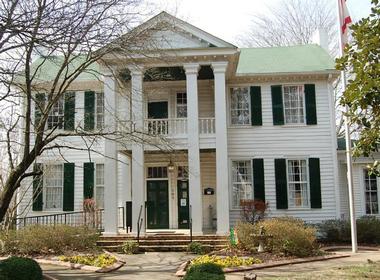 
Houston Memorial Library and Museum is built on land purchased in 1818 to house a home owned by United States Congressman and Alabama Governor George Smith Houston. Following Houston’s death, the Federal-style home was the residence of his wife Ellen until her 1909 death, when it became a Kiwanis Club facility and later a public library. Today, the home is listed on the National Register of Historic Places and is preserved as a historic home museum, open to the public for tours and public special events. Its library portion is also considered to be a museum in itself, featuring a lending library with volumes related to local history. 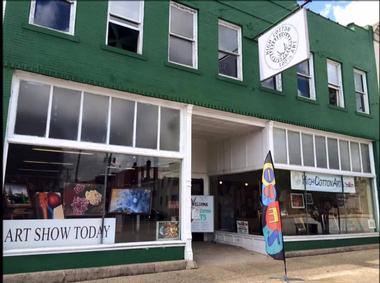 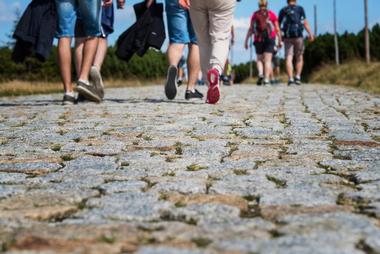 Athens-Limestone County Nature and Heritage Trails are a system of interlacing trails that provide driving, walking, and canoeing access throughout the city’s parks and recreational areas. Trails within the system include the Antebellum Trail, a driving tour trail that showcases 24 antebellum homes and a variety of 19th-century structures throughout the region, and the Civil War Trail, which traverses sites connected to the region’s Civil War history. 21.9 miles of canoeing trails are also offered along the Elk River as part of the system, along with an accessible trail created with wheelchair and stroller access in mind and a family-friendly recreation loop. 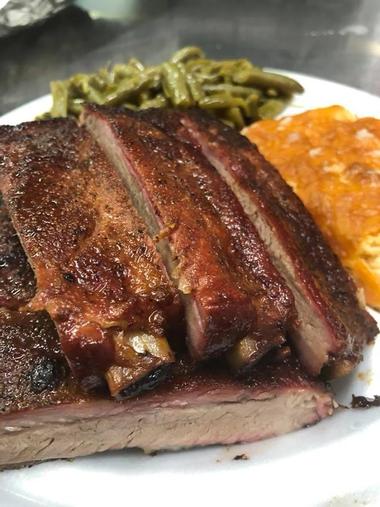 306 Bbq is a family-owned barbecue restaurant that was opened in 2011 by owners Lee Noah, Whitney Skipworth, and Justin Burgreen and serves authentic Southern-style barbecue dishes slow-cooked and pit-smoked in house. The restaurant uses the highest quality meats possible in all of its dishes and offers a variety of homemade barbecue sauces to complement entrees. Pulled pork, chicken, and spare rib dishes are offered, along with chicken wings and a variety of combination entrees. A full children’s menu is served, along with a variety of American-style side dishes and desserts. All of the restaurant’s meals are available for dine-in or take-out. 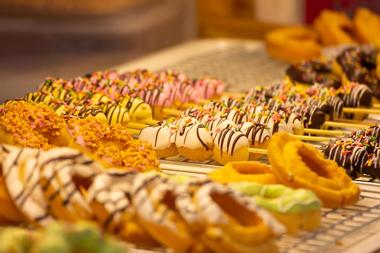 K-May Donuts is operated by Chindy and Lisa Taylor and Chy Khoun and is a local favorite for donuts, pastries, and breakfast items. The restaurant is named as an homage to the traditional name for Cambodia’s residents and operates three franchise locations throughout the northern Alabama region, including locations in Decatur and Cullman. The Athens location is famous for its old-fashioned glazed and cake donuts and also serves delicacies such as fresh bear claws and homemade biscuits. Breakfast sandwiches are served during the morning hours, including croissant sandwiches, breakfast tacos, and kolache-style jalapeno-and-cheese wrapped sausages. All donut orders are prepared to order and hand-packaged for customers, available in single servings or box sizes. 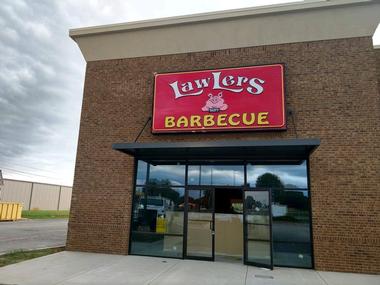 LawLers Barbecue opened its first location in the Tennessee city of Pulaski in 1978, operated by brothers Phillip and Jerry Lawler. Today, the regional barbecue chain is known for producing some of the most flavorful barbecue in the Northern Alabama and Southern Tennessee regions, utilizing old-fashioned family recipes to craft tender, juicy slow-smoked barbecue dishes. All meat is hand-pulled from the bone for the highest quality possible and lightly sauced to emphasize the meat’s smoked hickory flavor. Barbecue is available by the pound, along with a variety of family-style dishes and combination specials. In addition to the restaurant’s Athens location, nearly a dozen other chain locations are operated in nearby cities such as Madison, Huntsville, and Muscle Shoals. 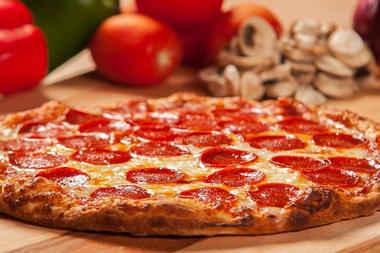 © Courtesy of Jeffrey A McDonald - Fotolia.com

Village Pizza was the vision of brothers-in-law Norm Cluff and Jerry Gilbert, who envisioned the creation of a pizzeria that would serve the region’s best pizza and provide a gathering space for the Athens community. More than 20 years later, the family-friendly pizzeria has become a local institution, offering a wide variety of brick-oven pizzas and traditional American fare. Specialty pizzas include the restaurant’s buffalo chicken, Aloha Special, and chicken spinach alfredo pizzas. Build-your-own pizza options are also offered, along with chicken wing platters, submarine sandwiches, and a variety of appetizers and desserts. Domestic and craft draft beers are also available.

11 Best Things to Do in Athens, Alabama

20 Best Things to Do in Tuscaloosa, Alabama

25 Best Things to Do in Birmingham, Alabama

10 Best Things to Do in Prattville, Alabama