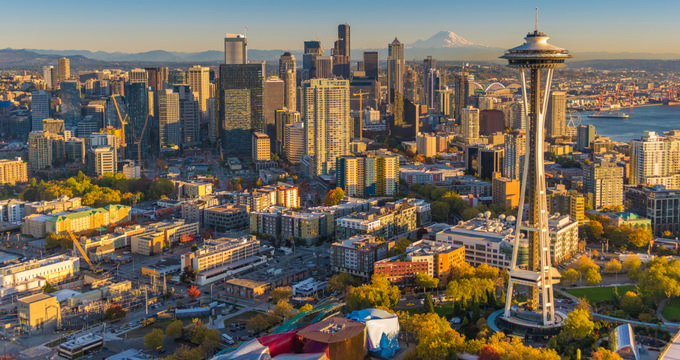 A seaport city situated on the west coast, right in the northwestern tip of the United States, Seattle is one of the nation's largest and best-known cities. Nicknamed 'Rain City' and 'The Emerald City', Seattle is the biggest city in Washington and the surrounding Pacific Northwest area and is just 100 miles away from the United States-Canada border. Seattle covers an area of just over 142 square miles and has an estimated population of around 725,000 people, with approximately 3.87 million in its surrounding metropolitan area. CDC information for travelers. Hours/availability may have changed. 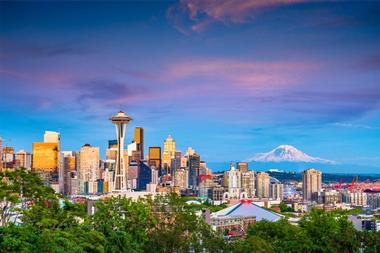 The area that was set to become Seattle was inhabited by Native American tribes for many years before European colonists and settlers arrived. The city was partly founded by Arthur A. Denny, who led the 'Denny Party' to the area in 1851. The city was given the name of Seattle to honor a local Native American leader called Chief Si'ahl. At first, Seattle was a simple logging town, but with the development of ships and trade routes, it became a key commercial hub and the perfect link between the United States and Alaska during the famous Klondike Gold Rush.

Nowadays, Seattle is well-known as a cultural and business hub for the Pacific Northwest. Boeing, the world-famous manufacturer of airplanes and rockets, was set up in the city, and other major global companies also made their headquarters in Seattle like Microsoft and Amazon. The Seattle has also played a key role in music over the years, being the birthplace of bands like Nirvana and Pearl Jam, as well as the legendary Jimi Hendrix. 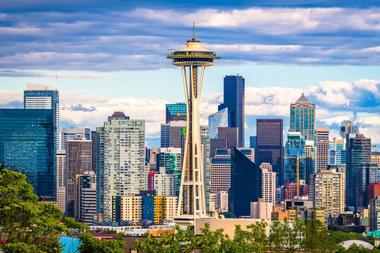 The elevation of a town, city, monument, mountain, or other key location around the world tells us how high it is in relation to sea level and can be a very important geographical statistic for a variety of reasons. Measuring elevation in Seattle is challenging as the city has some places that are much higher up than others. The highest point in the city of Seattle has an elevation of 520 feet (158 m), while the lowest point is out on the water, which has the same elevation as sea level. The average elevation of Seattle is generally calculated to be around 170 feet (52 m).

Many major cities around the United States, especially those that are situated in coastal locations like Seattle, tend to have quite low elevations as they're so near the sea. This is true of places like New York City and Los Angeles for example. Back in the state of Washington, the highest town is Waterville, located in Douglas County and sitting at an elevation of 2,622 feet (799 m), and the state itself has a mean elevation of 1,700 feet (520 m), so Seattle's elevation is much lower than the state average.

You are reading "Seattle Elevation" Back to Top

3.Climate and Things to Do in Seattle (Seattle Elevation) 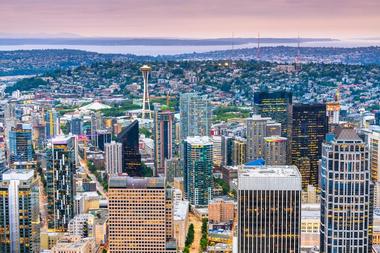 The city of Seattle has a temperate marine climate, also known as an oceanic climate, due to its low elevation and proximity to the Pacific Ocean. It has relatively cool winters with a lot of precipitation, and dry, warm summers. The city earned its nickname of 'Rain City' due to the large amount of rain that falls through the colder months of the year like November, December, and January, with an average total of around 37.5 inches of rainfall seen in Seattle per year. Some snow can also fall in Seattle if the temperatures drop low enough. The warmest month of the year is July, with average highs of 91°F (33°C), while the coldest is December, when the average lows drop down to 41°F (5°C).

Seattle is the largest city in its home state and the surrounding Pacific Northwest area, so it's a major cultural and touristic hub. The iconic Space Needle is a great place to visit for incredible panoramic views of the city skyline, and other landmarks and must-visit locations include the waterfront, Lake Union, and Pike Place Market. Both urban activities like clubs and shows and more nature-based recreation like hiking and kayaking can be enjoyed in the Seattle area.

You are reading "Seattle Elevation" Back to Top

The Washington Park Arboretum has a variety of gardens that are divided among different themes.

Pacific Connections Garden is home to a variety of plants that you would see if you traveled throughout Cascadia, China, Chile, Australia, and New Zealand. Inside this garden, visitors can explore the New Zealand Forest, Gateway to Chile display, and Preview Gardens. Some of the highlighted plants include the alpine bottlebrush and a western red cedar.

Joseph A. Witt Winter Garden features flora and fauna that blossom throughout the colder months of November to March. Although majority of the Washington Park Arboretum is subdued during these months, the joseph A. Witt Winter Garden glistens and flourishes. Brightly hued plants, such as Berberis and Cyclamen coum pair perfectly with the enormous and dense green firs and cedars.

Woodland Garden is situated among two ponds and a small stream that flows throughout a valley. A naturalistic atmosphere is perfectly achieved with the combination of the water, various stones and patchwork, and layered plants. Some of the plants visitors can explore in this garden include various maples, sourwood, and the Japanese spicebush.

Foster and Marsh Island transforms throughout the seasons. Visitors can find Foster and Marsh Island by following the Waterfront Trail to the end. The magnificent color changes and plant flourishment throughout the season makes up for the subdued garden during the winter. In the fall, majority of the plants, such as the larch, on Foster and Marsh Island have a golden hue. In spring, brightly hued flowers blossom across the trees and grasslands. One of the most beautiful sights is the “snow” that comes from the cottonwoods. During the summer, the cottonwoods shed when there is a breeze, which creates the snow-like appearance on the ground.

Rhododendron Glen began when Dr. Cecil Tenny donated a large amount of rhododendron plants to the Washington Park Arboretum. Native to Asia, the rhododendron species has various forms and blends perfectly with plants such as ferns and magnolias.

Azalea Way is most likely what pops into the mind of someone who thinks about the Washington Park Arboretum. This ¾ mile stretch is aligned with the middle of the Washington Park Arboretum, and features a variety of distinctly hued plants that are layered among dense evergreen trees. Two of the highlighted plants are flowering cherries and azaleas.

Japanese Garden was designed by the renowned Kiyoshi Inoshita and Juki Iida. Together, Inoshita and Iida constructed a 3.5 acre garden that featured approximately 580 granite stones and classic Japanese period pieces of architecture.

Since education is extremely important to the University of Washington Botanic Gardens, the Washington Park Arboretum is home to various educational opportunities. One of the easiest and most popular educational opportunities at the Washington Park Arboretum is the specialized tour program. Within this program, visitors have the option of exploring the gardens in a unique way. If visitors want to learn about a specific number of gardens in-depth, they can tour the gardens with a tour guide. Another popular tour option is the tram tour. The tram tour is handicap accessible and is perfect for people who want to tour the gardens in a fast, yet educational, manner.

Aside from specialized tours, the Washington Park Arboretum offers a variety of classes, workshops, and seminars that everyone can participate in. Many of the classes are divided up by age, but there are also special days for families and community days as well.

You are reading "Seattle Elevation " Back to Top

14 Best Things to Do in Issaquah, Washington

12 Best Things to Do in Snohomish, Washington