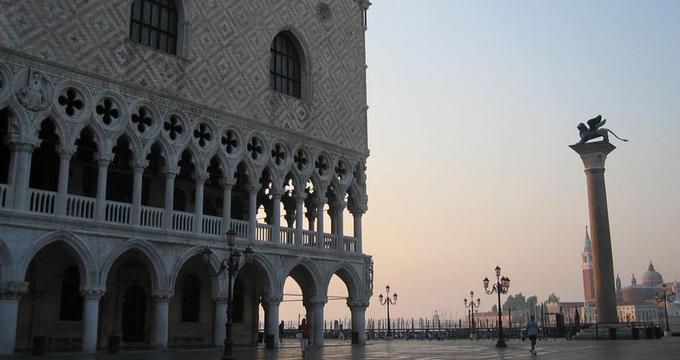 Regardless of where you are staying in Venice, you will end up spending quite a bit of time in St. Mark's Square. St. Mark's church, the Doge's Palace and Museo Correr are located in the square which comes alive during the day with hundreds of visitors. The cafes in the square play life classical music at night, so plan to have a sit and relax with a drink.

Feeding the pigeons is a popular activity. You can purchase packets of corn from the vendors and take your picture balancing the birds on your arms.

St. Mark's Church is spectacular. Ornamented with golden facade mosaics, marble and bronze statues, and five domes, this basilica is unlike any other. It stands on the eastern end of the square. The interior is open to visitors on almost all days for a few hours. Sometimes, the line is quite long, especially during the holidays. You can find the current schedule in English at www.basilicasanmarco.it. If you are planning a visit in the summer, be sure to wear a shirt with sleeves and a skirt or pants that fall below your knees, or you will not be allowed inside. There is no admission fee to enter the church. Once inside, you can admire amazing frescoes and floor mosaics, statues, tombs, columns and other beautiful details.

The Doge's Palace is a popular stop for many out-of-town visitors who go inside the former home of the city's doges to tour the torture chamber, prisons and the Great Council Hall. You can find the current opening times and admission information in English at www.museiciviciveneziani.it. Once you purchase your ticket, you will also get access to the nearby Museo Correr. If you don't have the time to tour the museum, stroll around the building and note some of the details. The 15-century Gothic Porta della Carta use to be the main entrance. It leads to the internal courtyard which you can enter even without a ticket to the museum. The balcony facing the Piazzetta features a lion, a symbol of the city. The main entrance is around the corner.

Museo Correr is situated in the Napoleonic Wing, the western end of the square. The museum houses a collection of works that highlight the art and history of the city.

The Neo-classical Rooms house sculptures by Antonio Canova (1757-1822). The Procuratie Nuove, designed by the architect Vincenzo Scamozzi (1552-1616), contain items that document the history of Venice: naval achievements, festivals, and daily life. The Art Collection includes pieces from the earliest days of Venetian painting through the sixteenth century.

Tickets cost 11 Euro. The museum is open almost every day, except on major holidays. For current opening times, visit www.museiciviciveneziani.it.

Located in the Piazzetta next to Piazza San Marco, the columns of San Marco and San Teodoro were brought from Constantinople and erected in the 12th century.

One of the columns is topped with a statue of San Teodoro, the patron of Venice before San Marco. The statue is a replica - the original is stored in the Doge's Palace. The second column features a bronze lion with wings, a symbol of the city.

Campanile di San Marco is over 300 feet high. Visitors can take an elevator up the tower and enjoy spectacular views of the city. If you decide to go, however, you should be prepared to stand in line. The tower houses five bells that toll every hour. At the base of the tower is the Loggetta, decorated with Classical sculptures and reliefs. View the tower from the boat.

When you stand in the square facing the font of the church, there are quite a few details to note. The four horses above the doorway are replicas of the statues that are on exhibit inside the basilica. Above the horses, the gilded Venetian lion, the symbol of Venice, and St. Mark and the Angels crown the top of the church.

Facade mosaics are just spectacular. Depicting scenes from the life of St. Mark, the gilded mosaics shine brightly on a sunny day. Notice also the five huge domes on top of the church.

The Piazzetta is flanked by the palace on one side and the Libreria Sansoviniana on the other. There is a cafe in the square where you can order an espresso and rest your feet.

From here, you get a nice view of the palace, the bell tower and the church. The best time to go is early in the morning before the square becomes crowded with tourists.

10 Best Things to Do in Venice, Italy

25 Best Things to Do in Naples, Italy