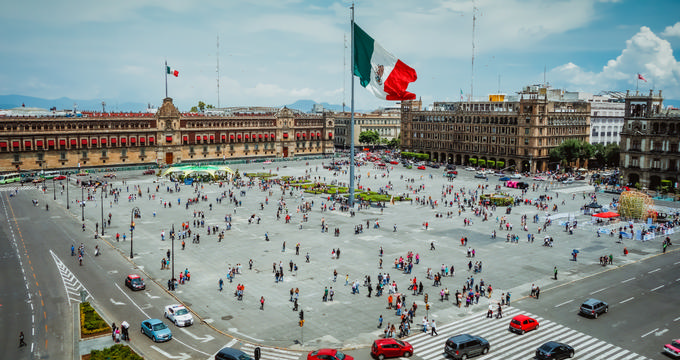 One of the biggest and most important cities in all of North America, Mexico City is the capital and most populous city of Mexico. It's also the most populous city in North America, being home to approximately 8.9 million people, with over 21.3 million in the surrounding Greater Mexico City area, which is the biggest metropolitan area in the entire Western Hemisphere. The city covers an area of 573 square miles and is located in the Central Time Zone. CDC information for travelers. Hours/availability may have changed. 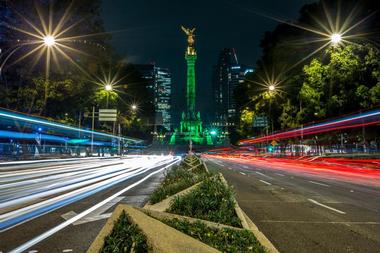 Mexico City is the oldest capital city throughout the Americas and was actually founded by Native Americans, with its history going back many, many years. The city was first built by the Aztecs and called Tenochtitlan in 1325, but was destroyed nearly two centuries later in 1521 during the Siege of Tenochtitlan, with the city being the capital of the Aztec Empire at the time. After being destroyed, the city was rebuilt in a Spanish style and renamed Mexico Tenochtitlan in 1524, before being renamed again to Ciudad de Mexico (Mexico City) in 1585. It was a key center for the Spanish and then became just as important to Mexico when the country achieved independence.

Nowadays, Mexico City is a major cultural, commercial, and touristic center for Mexico, filled with a mixture of modern high-rise buildings and old-fashioned Spanish-style architecture. Greater Mexico City has a gross domestic product of $411 billion, accounting for over 20% of Mexico's entire economy. The city is known for its progressive nature, distinctive monuments, and multitude of historic sites and attractions like the Angel of Independence, Mexico City Metropolitan Cathedral, Palacio de Bellas Artes, and National Palace.

2.Elevation of Mexico City in Feet 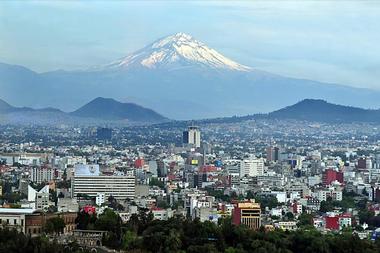 The elevation of a town or city is an indicator of high or low that location is in relation to the mean sea level of Earth. Many major cities are located in coastal areas with relatively low elevations of 500 feet (152 m) or less, and low elevation areas tend to have slightly warmer temperatures than high elevation settlements. Elevation is an important geographical statistic with a lot of uses and influences. The elevation of Mexico City is extremely high at 7,380 feet (2,250 m).

The city's lowest point is at an elevation of 7,200 feet (2,200 m), while its highest point is at 12,890 feet (3,930 m), and many of the surrounding mountains and volcanoes can reach elevations exceeding 16,000 feet (5,000 m). Most other capital cities around the world are situated at much lower elevations than Mexico City, and the city’s exceedingly elevated location has a strong effect on its weather conditions. Due to the high elevation in Mexico City, visitors who are used to living at much lower elevations may need some time to adapt to the thinner air, with altitude sickness beginning to set in as one approaches elevations of 8,000 feet (2,500 m).

You are reading "Mexico City Elevation" Back to Top

3.Climate and Things to Do in Mexico City 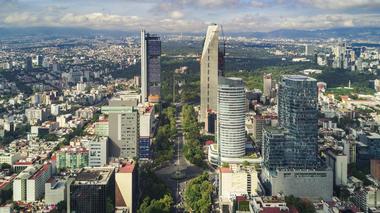 Mexico City's high elevation causes it to have a subtropical highland climate, and weather conditions can actually vary around the city depending on elevation. The low-lying boroughs can receive less rainfall and slightly warmer temperatures than the higher elevation areas. Mexico City receives large amounts of rainfall through from May to October, with the other parts of the year seeing much less rain in general. The hottest month of the year in Mexico City is May, which has average highs of 27°F (80°C), while the coldest month of the year is January, with average lows of 45°F (7°C).

As an enormous capital city, Mexico City has a lot of attractions and reasons to visit. Many museums, landmarks, monuments, eateries, bars, live entertainment venues, and more can be found all around Mexico City, with some of the key touristic spots being the Angel of Independence, Mexico City Metropolitan Cathedral, Chapultepec Castle, and National Palace.

You are reading "Mexico City Elevation" Back to Top

Overlooking miles of golden sands along the Mexican Pacific coastline, Cuixmala, Mexico, is a legendary private estate surrounded by 25,000 acres of lush vegetation, lagoons, and beaches that offers discerning guests an unforgettable vacation experience. Built as a private home for family and friends, Cuixmala features a variety of luxurious accommodations, ranging from Moorish Palace-inspired casas and casitas, and luxury villas.

Guest lodgings have multiple bedrooms with en-suite bathrooms, outdoor whirlpools and large decks overlooking the ocean, spacious lounges and living areas, elegant dining rooms, and modern movie rooms. Deluxe amenities and facilities at Cuixmala include on-site beauty treatments and massages, a fully stocked DVD library for guests to use, a communal lounge and full service bar, and 25,000 acres of beautifully manicured grounds with tennis courts and an airstrip for private planes. All villas have their private swimming pools and sun decks with gorgeous views over the surrounding coconut groves and the turquoise waters of the Pacific Ocean.

Cuixmala features an array of luxurious accommodations, including 13 casas, nine casitas, and four private villas, all of which have stunning garden and ocean views. Accommodations vary in size and layout with different levels of luxury, however, all feature multiple bedrooms with plush king or queen-size pillowtop beds dressed in luxurious Egyptian cotton linens, comforters, and pillows, and en-suite marble tiled bathrooms with rain showers, soaking tubs, thick towels, and designer bath products. Villas have spacious, open-plan living and dining areas, fully equipped kitchens with staff on hand for cooking and serving, libraries and lounges in which to relax, and outdoor living terraces with spectacular views. Modern amenities abound, including central climate control with cooling and heating, flat-screen televisions with cable channels, DVD players, hairdryers, irons and ironing boards, and complimentary wireless Internet.

All casas at Cuixmala have fully equipped kitchens that are ideal for self-catering, while guests staying in the casitas can dine at the Casa Gomez clubhouse, which serves a creative menu of classic Mexican cuisine or at La Loma restaurant, which also offers an ever-evolving menu of gourmet organic Mexican fare. The food is accompanied by an extensive list of fine wines from around the world and guests can dine in the elegant dining room or out on the ocean-view terrace against a backdrop of spectacular vistas. Each villa has a stylish bar area where casa staff can mix cocktails and other drinks, while Casa Gomez has full service bar with signature cocktails, imported spirits, artisan beers and wines from around the world.

Cuixmala offers an array of amenities and luxurious facilities, ranging from private swimming pools with sun decks, the Casa Gomez clubhouse which has a restaurant and bar, and the La Loma restaurant, which serves a delectable selection of gourmet organic Mexican cuisine. Cuixmala’s stylish boutique sells a wide range of chic resort and designer wear, along with a variety of high-quality Mexican arts and crafts by local artisans.

In addition to the deluxe amenities and facilities offered at the hotel, activities in and around the area include horseback riding and horseback jungle tours, polo, hiking and mountain biking on the surrounding plantation trails, kayaking, snorkeling, and fishing charters. There is an 18-hole golf course at the nearby El Tamarindo resort; tennis can be enjoyed day and night on lighted courts, there are volleyball areas on the beach and massage and yoga are available.

Playa Cuixmala is the resort’s private beach which is perfect for horseback riding, beachcombing, jogging and sunbathing, as well as water sports such as swimming, snorkeling, kayaking, volleyball, and fishing charters. Other beaches include Playa Escondida, a pirate’s beach with hidden caves and fantastic surfing, picnicking and bird-watching.

Local attractions around the resort include a Marine Turtle Sanctuary and Conservation Program, which protects more than 10,000 turtle nests and the newly hatched turtles which arrive between July and April. Visitors can help release newly hatched turtles into the sea after they hatch. There is also an animal sanctuary located at the foot of Casa Cuixmala, which is home to an array of exotic animals, including eland, gazelles, and zebra.

You are reading "Mexico City Elevation " Back to Top

La Puertecita Boutique Hotel is a rustic-chic boutique hotel set on a quiet cobblestone street in the heart of San Miguel de Allende in Guanajuato, Mexico. Surrounded by lush tropical gardens, the elegant retreat has been welcoming guests for nearly 30 years and offers an idyllic escape from the hustle and bustle of daily life.

The hotel features beautifully appointed guest rooms and suite with cathedral ceilings, hand-carved wood furnishings, sitting areas with fireplaces, private bathroom with Jacuzzi tubs, and private terraces with breathtaking views. Upgraded suites have fully equipped kitchenettes and separate living and dining rooms for entertaining, and modern amenities such as flat-screen televisions with cable channels and complimentary wireless Internet abound. Deluxe facilities and guest services at La Puertecita Boutique Hotel include a charming restaurant with an outdoor terrace and spectacular views of the garden and waterfalls, two outdoor swimming pools, a hot tub and a spa, along with in-room or poolside massages. The hotel is ideally located for a relaxing weekend away or for exploring the neighborhood and is a short walk away from the Museo Histórico de San Miguel de Allende, Templo de San Francisco, Teatro Angela Peralta and Parque Juárez (Juarez Park).

Spacious living areas have stylish décor and comfortable sofas and armchairs, tables and chairs for dining in, kitchenettes with coffeemakers and microwaves, and mini-fridges. Modern amenities are available in all accommodations and include air-conditioning and ceiling fans, HD flat-screen televisions with cable channels, direct dial telephones with voicemail services, hairdryers, irons and ironing boards, and complimentary wireless Internet.

A complimentary breakfast is served every morning in the dining room and includes freshly baked bread and pastries, seasonal fruit, cereals and yogurt, a variety of signature dishes, and freshly brewed coffee, tea, and juices. Lunch and dinner are served at the on-site restaurant and features seasonal menus of authentic Mexican cuisine and other international dishes, along with an extensive selection of libations, including a range of rare tequilas. Guests can dine in the casual restaurant or out on the terrace overlooking the lush gardens and tinkling waterfall.

Amenities, facilities and guest services at the La Puertecita Boutique Hotel include two outdoor swimming pools, a hot tub, and an exclusive spa, along with in-room or poolside massages. A signature restaurant and full-service bar offer delectable Mexican cuisine and beverages, including a range of rare tequilas, and an outdoor terrace boasts spectacular views of the garden and waterfalls where guests can dine. Other facilities include 6,000 square feet of indoor and outdoor banquet facilities which can be used for romantic weddings and small corporate meetings, a 24-hour front desk with a range of concierge services, welcome amenities, room service, daily housekeeping and a nightly turndown service, and complimentary wireless Internet.

La Puertecita Boutique Hotel presents a stunning oceanside location for small to medium-size weddings and other special celebrations. Boasting a selection of indoor and outdoor venues with breathtaking ocean views, the hotel can cater for a variety of functions, from banquets and bridal showers to rehearsal dinners, and farewell brunches. The hotel also offers a range of specialized services such as catering and customized menus, décor and venue set-up, music and entertainment, and luxurious accommodations.

You are reading "Mexico City Elevation " Back to Top

23 Best Things to Do in Ensenada, Mexico

25 Best Places to Visit in Mexico

25 Best Things to Do in Puerto Vallarta