17 Best Things to Do in Cephalonia, Greece 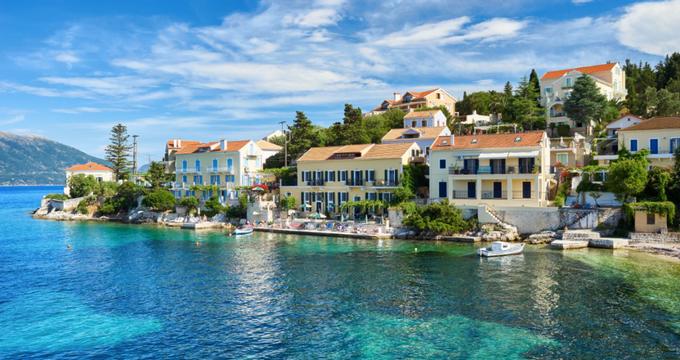 An inviting island in the Ionian Sea, Cephalonia, also known as Kefalonia, is a sublime destination in the western part of Greece. From waterfront villages such as Fiscardo to guided fishing tours, going underwater to see historic wrecks such as the HMS Perseus British submarine, discovering hidden caves, and exploring ancient ruins including Assos Castle and the Acropolis of Sami, there is no shortage of incredible things for travelers to experience in this part of the world. 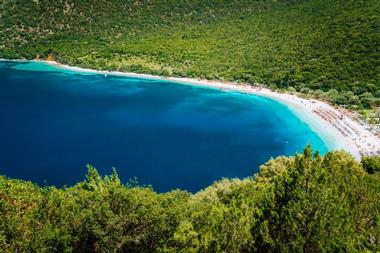 If Antisamos Beach looks like it is just out of a movie, it is?—the stunning blue and green waters, the surrounding green hills, and lush vegetation all appear in a few scenes of the film Captain Corelli’s Mandolin starring Nicholas Cage and Penelope Cruz. Set 17 miles east from Argostoli and accessible from a coastal road in the port town of Sami, the idyllic destination invites sun-worshippers to stay awhile with comfortable chairs, shady umbrellas, and a water sports center. Those seeking refreshing food and drink can take a short stroll to the beachside Mojito Beach Bar and Restaurant. 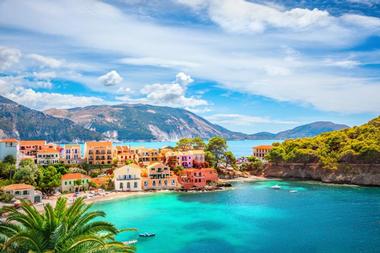 On the west coast of the island of Cephalonia north of Myrtos Beach is the small and somewhat secluded Assos Village. Framed by a bay of fishing boats and a few luxury yachts, the serene destination stands out for its, pebbly beach, verdant landscape of cypress and pine trees, and traditional Ionian architecture featuring occasional pops of vibrant, pastel colors. The village is home to a population of fewer than 100 people, and visitors will find a few tavernas and other food establishments. The main points of interest are what remains of Assos Castle, a stronghold built by the Venetians to protect the village from pirate raids at the time in the 15th century, and the center of the village named Paris Square in honor of the French, who helped rebuild houses following the earthquakes in 1953. 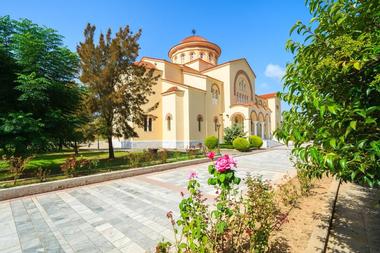 As the venerable patron saint of Cephalonia, St. Gerasimos holds a special place in the hearts of the local people. After arriving in Kefalonia in 1555 after being ordained as a monk and spending time Jerusalem, Crete, and Zakynthos, and living in a cave his initial five years, he did many good deeds from cultivating the area to establishing a monastery to care for the sick and poor. Today, his tomb and relics are housed in the monastery, and every August 16 his life is celebrated during the Feast of Saint Gerasimos, where his body is passed over the ill for healing.

, OH -- You are reading "17 Best Things to Do in Cephalonia, Greece" Back to Top 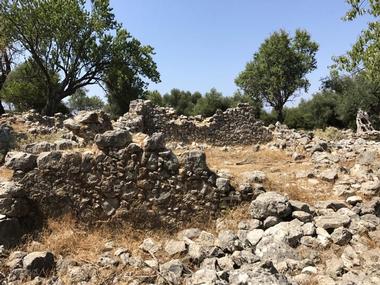 All that is left from a powerful town that thrived since Paleolithic times are the ruins of the ancient Acropolis of Sami, which was mentioned in several of Homer’s poems. Set in Lapitha Mountain overlooking the port town of Sami, the Acropolis site is accessible by a series of scenic trails. Once up top, visitors will not only encounter the amazing views of Sami bay below but also get to see the remarkable ruins of the 11th-century Monastery of Agios Fanentes as well as the walls of the ancient Acropolis.

-- You are reading "Fun Things to Do in Cephalonia, Greece this Weekend with Friends" Back to Top 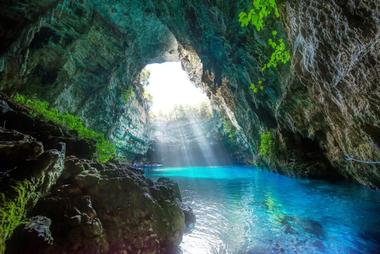 
There is another part of Cephalonia that is spectacular but hidden from plain view?—the caves and chasms. While not of all these underground chambers and rock formations are open to the public, such as the Zervati Lake Cave and the Chasm of Agia Eleousa, the open ones, are sites to behold. Discovered 300 years ago, the Drogarati Cave near Sami is visually impressive with stalactite and stalagmite formations and a depth of nearly 200 feet below ground level. One notable highlight is the Sala of Apotheosis, which offers incredible acoustics, and functions as a venue for concerts and other shows. Meanwhile, the Chasm Cave of Agioi Theodori offers visitors a stunning view with its variety of birds, trees, shrubs and lush vegetation, and a surprise turquoise lake.

-- You are reading "What to Do in Cephalonia, Greece this Weekend" Back to Top 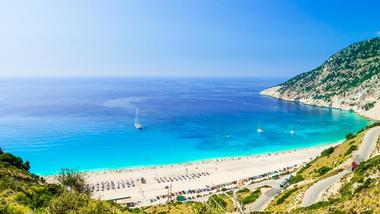 
Nestled between two mountains, Agia Dynati and Kalon Oros in the northwestern part of Kefalonia island and surrounded by the Ionian Sea, Myrtos Beach, attracting worldwide acclaim for its beautiful setting defined by the gorgeous turquoise waters against the soft white sand, mile-and-a-half of dazzling pebbles, and the soaring cliffs in the background. Along with being an excellent place for relaxation, this popular beach offers a memorable place to watch the sunset. The beach is accessible via a winding road from Divirata village; in the summer months, there is a public bus service to and from Myrtos Beach operated by the Municipality of Pylaros.

-- You are reading "Top Romantic Tourist Attractions in Cephalonia, Greece" Back to Top 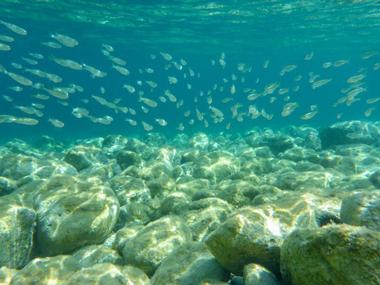 Scuba diving enthusiasts are in for a pleasant surprise when exploring what lies beneath the surface of the Ionian Sea off the coast of Cephalonia. From traditional dives to discovering caverns and abandoned wrecks, exciting experiences abound. For lessons and scuba diving packages, the Aquatic Scuba Diving Club in Agia Efimia is a great source for venturing into the local waters known for clear visibility, reefs, and rich underwater life. Notable spots for scuba diving include caves such as Melissani, Karavomilos, and Zervatis, and historic wrecks such as the British submarine HMS Perseus (ranked one of the top 10 dives in the world), which hit an Italian mine in December 1941, and remains intact, surrounded by incredible underwater life, such as big amberjacks and dentex fish. Aquatic Scuba Diving Club 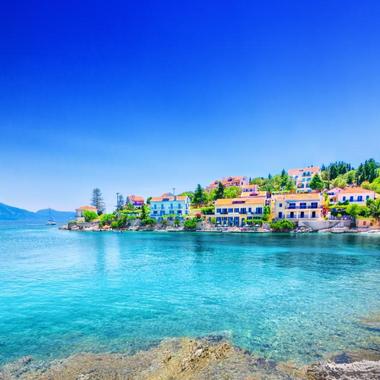 In the northernmost port of Kefalonia, Fiscardo is a small, former sleepy fishing village and community that travelers often reach from Argostoli by taking a scenic, rugged drive along the western coast, or by the water via their boats. Today, the place is not so sleepy, attracting boaters and other visitors drawn to the tavernas, cafes, beaches, and prime people-watching. Unlike other parts of Cephalonia, Fiscardo pretty much survived the famous 1953 Ionian earthquake that destroyed other parts of Cephalonia.

, Michigan beaches -- "Best Things to Do in Cephalonia, Greece for Locals & Tourists - Restaurants, Hotels" Back to Top 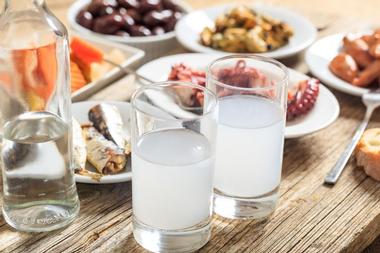 Boasting views of the mythical Ithaca from its harborfront location in the village of Fiscardo, Tassia is family owned and operated restaurant that has been serving diners since 1972. Glancing at the establishment’s photo gallery reveals famous guests through the years from Tom Hanks to Jon Bon Jovi. At the helm of its kitchen, Tassia Dendrinou, owner and acclaimed chef, specializes in Kefalonian and Greek cuisine. All of the ingredients such as olive oil, meat, and fish are sourced from local providers, and vegetables picked from their private garden, resulting in fresh, flavorful, healthy dishes such as the Seafood Pasta with fresh mussels, octopus, shrimp, and squid in wine sauce, and Kefalonian Meat Pie made with veal, beef, and rice baked in a homemade pastry. 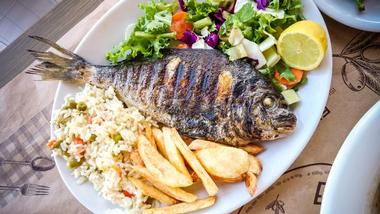 Set in Koufonisia, Captain Nikolas is a traditional white stone taverna known for serving fish and fresh seafood, and its beautiful views of the sea. What began as a small restaurant with only a few tables in 1989, has grown a bit with indoor and outdoor dining and a marvelous menu with popular plates such as the lobster pasta, seafood mezze, and tomato fritters. The establishment is a favorite among locals and visitors alike.

-- "New cool stuff to do in Cephalonia, Greece" Back to Top or Romantic Getaways 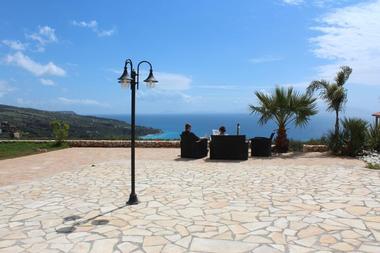 Located in Lourdas, Kefalonia, Andromeda Centre is an inviting restaurant and venue for weddings set on the hillside and surrounded by gorgeous terraced gardens. Open May until October, the restaurant offers a peaceful ambiance and laid-back atmosphere typical of a Greek taverna. Mains on the Greek night menu include Moussaka, seafood risotto and more, complemented by a buffet of salads and other specialties such as Greek salad, and tzatziki. 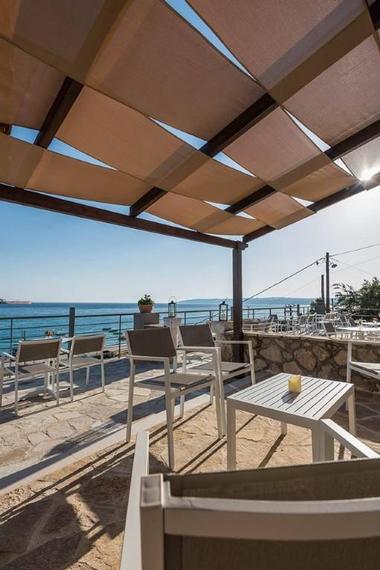 The exceptional Mediterranean and modern Greek cuisine combined with an exquisite setting overlooking the sea from an elevated location in Lourdas Beach makes Lorraine’s Magic Hill an in-demand destination for dining. Along with the indoor and outdoor seating, the family-owned and operated establishment features an inviting bar area, which is perfect for enjoying a cocktail or a glass of Greek wine before a meal. Many of the dishes on the menu feature simple recipes handed down from generations, with savory selections such as Taramosalata, a fresh salmon roe dip and bread perfect for sharing, and Soutzoukakia Meatballs and slow-cooked Beef Stifado. 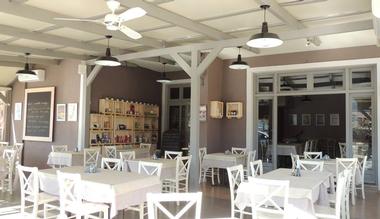 An airy, inviting place with simple wooden tables and contemporary, clean design, Ampelaki honors Kefalonian and Greek culinary traditions sourcing the freshest ingredients from all over the Mediterranean. Meals start with local dishes such as Riganada, a local dish with sourdough bread, grated tomato, oregano, and Kefalonian feta cheese, before moving on to more heartier fare such as Bakalaos skordalia, or fried codfish with mashed potatoes and traditional desserts such as Baklava and Patsavouropita, phyllo pastry filled with vanilla ice cream. 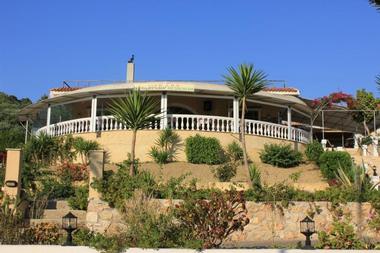 Family run since 1976, Oskars Restaurant is set in a scenic location on the Fanari route in Lassi, Argostoli. Creative Greek and Kefalonian culinary creations tempt the appetite with a full menu of enticing choices starting with appetizers such as Saganaki (fried Kefalotiri cheese) and Stuffed Peppers with Feta, to specialties ranging from Chicken Youvetsi to Drunken Mezes, a sausage and pork dish with mushrooms, cheese, Madeira sauce, onions, and peppers.


Near me on a budget: Best indoor water parks, Family resorts in Florida, Lake Tahoe

-- You are reading "17 Best Things to Do in Cephalonia, Greece" Back to Top or Amazing things to do around me 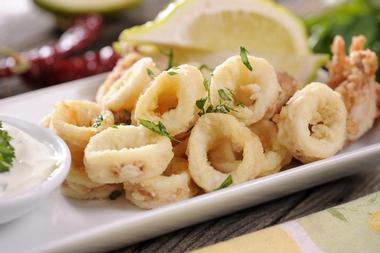 Located in Lassi, Argostoli not too far from Gradakia Beach, Phaedra Restaurant offers diners a relaxed atmosphere and a welcoming garden setting. Along with the tasty food, the establishment is known for being a fantastic location for watching the sunset from the outdoor patio. For many guests at this laid-back taverna, chargrilled meats and fish are the way to go, as are local specialties such as the Kefalonian meat pie with fresh vegetables. 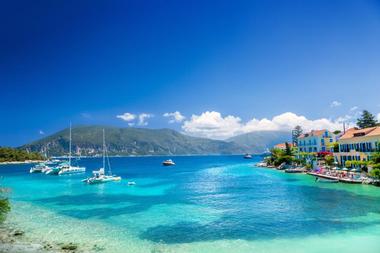 Travelers who want an unforgettable way to see Cephalonia would be wise to join one of the area boat tours. Ionian Discoveries offers a Marine Adventure excursion aboard a Kaiki, a traditional Greek wooden boat. Departing Fiskardo at 9:30 a.m., the vessel crosses the Ithaca channel, stopping at a secluded beach on Odysseus Island, followed by time for exploring marine life and rock formations, and a traditional Greek lunch off the island of Asteria before finally heading to Navagio cove, home to Shipwreck beach, a fantastic finale for a full day. Another option is with Fishing Tourism Kefalonia on the Dimitros-Efthimia boat where third-generation fisherman Captain Dimitris teaches guests the ins and outs of traditional longline or net fishing. The experience also includes time to swim the turquoise waters and enjoy a meal prepared by his wife Efthimia, before returning to Katelios harbor. Fishing Tourism Kefalonia

17 Best Things to Do in Cephalonia, Greece

You are reading "17 Best Things to Do in Cephalonia, Greece " Back to Top

25 Best Hotels in Poland for a Romantic Vacation

25 Best Places to Visit in Malta

25 Best Things to Do in Portugal