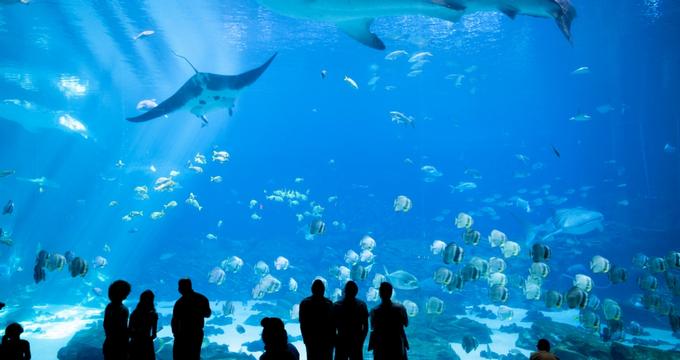 Aquariums are the closest many of us will ever get to experiencing the world underneath the world’s oceans, lakes, and rivers. Some of the world’s best aquariums are massive and as such are impressive even when just considering the volume of water inside. However, they are also fascinating because many have well thought out and informative exhibits. Here, you can learn about a world that otherwise you may not have the opportunity to experience. We’ve looked all over the globe and chosen some of the biggest and most impressive aquariums around. From unique aquariums like the AquaDom to massive ones such as the Dubai Mall Aquarium, we’ve got your sea life needs covered. Next read: Best Aquariums in the U.S.

There are more than 26,000 different animals from 740 species that live in the Okinawa Churaumi Aquarium. The various exhibits are made up of more than 70 tanks, with both salt and freshwater environments represented. The aquarium opened in 2002 and at that time was the largest in the world. Some highlights of a visit here include whale sharks and manta rays as well as a large collection of coral from 80 different species. The museum has a restaurant that serves a buffet-style lunch of mostly Okinawan dishes surrounded by views of the ocean. There is also a small cafe right by the Kuroshio Sea Tank inside. 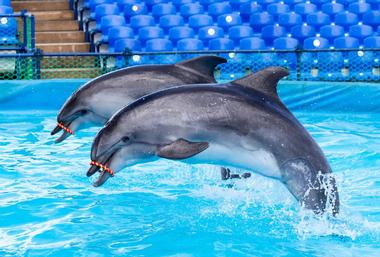 uShaka Marine World is an ocean-themed park in Durban, South Africa. The park has a large aquarium that is actually the largest in all of Africa. There are nearly one million gallons of water in the aquarium’s 32 tanks. The design of the exhibit takes the form of a shipwreck under the ocean. There is a world-famous restaurant in the park, which has a massive aquarium filled with sharks in its dining room. In addition to the aquarium, the park has a number of water rides, animal shows featuring dolphins, seals, and penguins, activities on the beach, and much more. 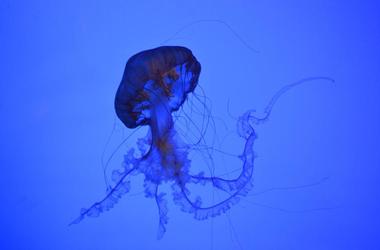 The Shanghai Ocean Aquarium is a large aquarium in Shanghai. Its most notable feature is the 390-foot-long underwater tunnel where visitors can see a variety of marine habitats, including reefs, the open ocean, a shark tank, and a living coral reef. The tunnel is one of the longest of its kind in the world and visitors can see a stunning 450 different species as they pass through it. Throughout the day there are several times that visitors can observe keepers feeding animals, including seals, penguins, sharks, and more. The aquarium is very popular with both locals and visitors and can get very busy, especially on national holidays.

L'Oceanografic is located in Valencia, Spain, and is the largest aquarium complex in all of Europe. The aquarium is located in an exhibition hall called the City of Arts and Sciences and contains nearly 2 million gallons of water. The aquarium is home to approximately 45,000 different animals representing 500 species. Some of the most popular animals in the exhibit are dolphins, rays, penguins, sharks, walruses, beluga whales, and sea lions. The water in the saltwater tanks is pumped in directly from the Mediterranean Sea. As impressive as the exhibit is, the building’s exterior is no less stunning as it was designed by Felix Candela and is impossible to miss. 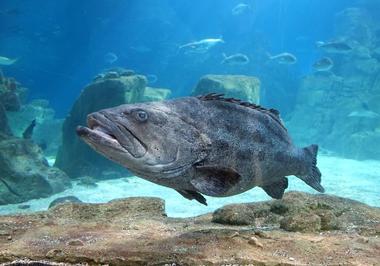 
Sea Life Istanbul (formerly known as the Turkuazoo Sea Life Aquarium) is one of the newest aquariums on our list as it only opened in 2009. It is located in the Forum Istanbul Shopping Mall in Istanbul, Turkey, and has several impressive features, including an 260-foot underwater tunnel. There is a variety of different habitats on display, including a flooded forest wetland and a rainforest. A major highlight is the Shark Encounter exhibit, which is the largest collection of sharks in Europe with more than 61 different animals from 15 species. The exhibit has shared ticketing with Madame Tussauds and Legoland, and booking all three attractions together can be a great way to save some money. 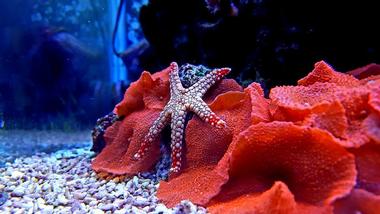 The Deep Aquarium is a massive public aquarium with more than 3,000 animals, including sawfish and sharks. The aquarium is sited where the River Hull meets the Humber estuary at Sammy’s Point. It is advertised as the only “submarium” in the world. There are thousands of different sea creatures living in the aquarium, including seven different varieties of shark. Exhibits at the aquarium include several hands-on, interactive displays, audiovisual presentations and, of course, living exhibits that together tell the story of life in the world’s oceans. As you visit, you will follow a chronological journey from the beginning of time up until today. 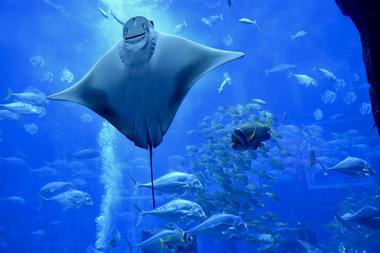 The Dubai Aquarium and Underwater Zoo is a large, suspended aquarium that is one of the largest tanks of its kind in the world. It is located on the bottom floor of the Dubai Mall in the UAE. The over 2.5-million-gallon tank is home to thousands of aquatic animals from nearly 150 different species, including hundreds of different sharks and rays. The largest group of sand tiger sharks in the world also lives here. Visitors can view the aquarium’s main tank from a variety of different viewpoints, including a 157-foot walk-through the tunnel, glass-bottom boat rides, cage snorkeling experiences, and even diving with sharks.

8.The Aquarium of Western Australia 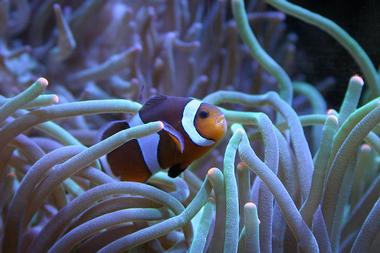 The The Aquarium of Western Australia opened in 1988 as the largest aquarium in the country. It is located in Hillarys and still has the distinction of having the largest aquarium tank in the country as well as the country’s longest walk-through aquarium tunnel. The original two exhibits were the walk-through tunnel now called Shipwreck Coast and the interactive touch pool. Since it opened in 1988, it has expanded to include nearly 50 exhibits in what is today among the top 10 aquariums in the world by size. The aquarium’s specialty is marine animals that live in the water along Australia’s western coast, which is divided into five geographic regions, with exhibits containing animals typical of each region.

-- "15 of the Best Aquariums in the World for Locals & Tourists - Restaurants, Hotels" Back to Top 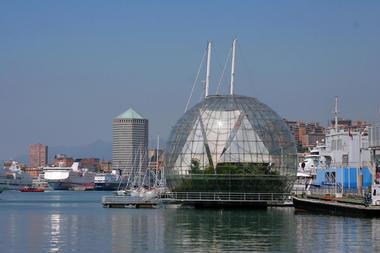 The Aquarium of Genoa is Italy’s largest aquarium and the second largest aquarium on the European continent. There are more than 70 tanks containing more than 1.5 million gallons. It covers 33,000 square feet and sits in the old harbor area of the city. The building was built on the occasion of the Genoa Expo ’92 in celebration of the 500th anniversary of Columbus’ discovery of the New World and, as such, the Renzo Piano-designed building was built to resemble a ship heading out to sea. The aquarium showcases the reefs of the Ligurian Sea, the North Atlantic, and the Caribbean. Best Aquariums in USA 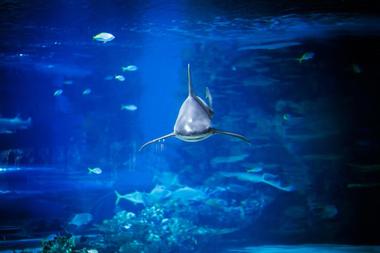 Chimelong Ocean Kingdom is an aquarium at Chimelong International Ocean Resort. The park is one of the largest marine-themed amusement parks in the world and features top-notch amusement park rides, a variety of rare animal exhibits, exciting performances, and a range of shopping and dining options. The whale shark aquarium at the park is the largest ocean aquarium tank in the world, at 220 feet high and containing over 1 million cubic feet of water. There are approximately 20,000 different varieties of rare fish and marine animals such as sea turtles, manta rays, and sharks. Other features include one of the largest marine-themed parades in the world, an impressive light and laser show, and a 5D movie theater. 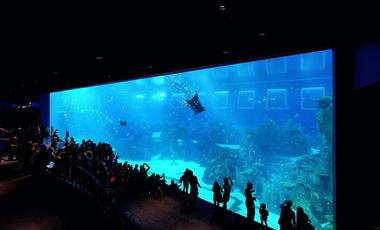 SEA Aquarium is a large aquarium and resort property in Singapore. The aquarium has more than 100,000 different animals from approximately 1,000 different species spread across a variety of different habitats. Some of the most exciting animals include nurse and hammerhead sharks, giant moray eels, reef manta rays, and the giant Pacific octopus. The aquarium has several options if you get hungry, including a couple of snack bars and a posh sit-down restaurant helmed by Singapore’s first female Iron Chef, Cat Cora. The aquarium shares the grounds with many other family-friendly attractions at Resorts World Sentosa, such as Adventure Cove Waterpark, the Maritime Experiential Museum, and Universal Studios Singapore. 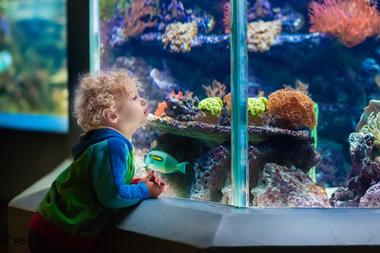 The Nordsoen Oceanarium (North Sea Oceanarium) is northern Europe’s largest aquarium. The aquarium sits on the banks of the North Sea in Hirtshals, Denmark. The main tank holds more than 1 million gallons and was built to resemble the open waters of the North Sea. There are also a number of smaller habitat aquariums, including an exciting seal exhibit. The species that live in the aquarium are mostly those that inhabit the waters around Denmark. There are also several themed tanks that contain special animals that may not be able to be shown in the other tanks as well as those that deserve special exhibits. One such themed area is the Creepy Crawlies exhibit, where you can see many different invertebrates on display and examine them with special bio-scanners that allow you to see microscopic details of the animals. 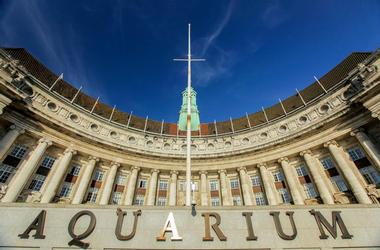 The Sea Life London Aquarium is located on the banks of the River Thames in Central London. It occupies the ground floor of County Hall and is conveniently located near other popular London attractions such as the London Eye. There are several themed exhibit areas, such as Atlantic Coasts, Ray Lagoon, and the Rockpool, which is a touch pool. A highlight of many people’s visit is the shark walk, where you walk above the shipwreck display and peer into its incredible depths through a glass window. If you want to get even closer to the animals, the aquarium offers VIP experiences, including shark feedings, behind the scenes tours, and snorkeling. 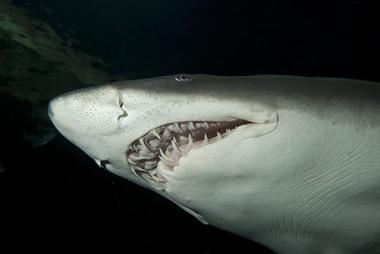 The Tropicarium Budapest is a family-friendly aquarium in Hungary’s capital. A day at the aquarium affords visitors the opportunity to see animals from all over the world, such as alligators, a number of exotic bird species, a large variety of reptiles, small monkeys, insects and, of course, numerous fresh and saltwater fish. Their most popular attractions include the shark tank, where you can walk through a 40-foot-long tunnel surrounded by sharks. Each week they have a shark feeding show, where divers feed sharks by hand right in front of the guests. Another highlight is the ray touch tank, where you can touch and play with rays. The aquarium also has a tropical rainforest exhibit that has rain falling every 15 minutes.

25 Best Places to Travel in March

25 Best Places to Visit in Nebraska