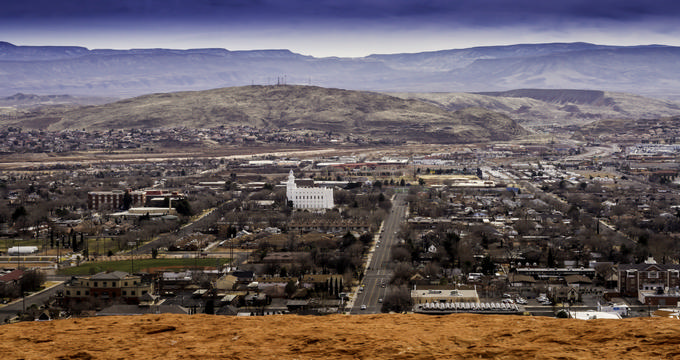 The county seat of Washington County, St George is a reasonably large city located in the southwestern corner of the state of Utah, not far from the borders with Nevada and Arizona. The city sits in the Mojave Desert, not far from several key geological areas like the Great Basin and Colorado Plateau. It's one of the fastest growing cities in the United States and covers an area of almost 65 square miles. Approximately 85,000 people call St George, Utah home, with almost double that amount living in the surrounding metropolitan area.

Before European settlers came to America, the area that would become St George was home to various Native American tribes including the Paiute. The town was founded in 1861 as a cotton mission, with the idea being to farm and produce enough cotton for the needs of the Church of Jesus Christ of Latter-day Saints, also known as the Mormon Church. The settlement was named St George after George Smith, one of the early Mormon leaders. Due to its key location, which helped to boost tourism in the area, and good climate for farming, the city grew quite rapidly and is now classed as the seventh biggest city in the state of Utah.

The fast growth of St George has continued into the modern day, along with its status as a highly popular tourist spot. St George is very conveniently situated for people who want to get outdoors and take in the sights and sounds of nature with various recreational activities. The city has easy access to Zion National Park, the Grand Canyon, Bryce Canyon National Park, and various other parks, forests, and monuments. It's also home to dozens of museums and is a key cultural hub for Utah, with a lot of shows and festivals.

Elevation is a term used to denote the height of a location in relation to sea level. It's an important geographical statistic with many uses, especially for town planning and architecture. The city of St George has an elevation of 2,860 feet (872 m), which is relatively high. Most major cities and towns around the United States were founded at elevations of 500 feet (152 m) or less in coastal areas. St George's high elevation is explained by the fact that it is far inland and situated very close to the Pine Valley Mountains, along with the fact that Utah is a very high state in general.

In fact, according to the average readings for each state, Utah is the state with the third highest elevation in all America, trailing only Colorado and Wyoming in this respect. The mean elevation of Utah is 6,100 feet (1,860 m), so the elevation of St George is significantly lower than the state average. The highest point in Utah is Kings Peak, which has an elevation of 13,534 feet (4,125 m), while the lowest point is the Beaver Dam Wash, not far from the Arizona border, which has an elevation of 2,180 feet (664 m). Therefore, when compared to the state’s lowest point, we can see that St George is actually quite a low lying spot in Utah.

3.Climate and Things to Do in St George, Utah 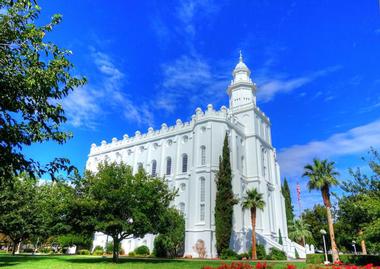 St George is well known for its high temperatures, with the city having a hot desert climate. The city has a lot of sunshine all year long and very low amounts of precipitation, with around 8.8 inches of rainfall falling each year and very rare cases of snow in the winter months. In general, the weather is very warm in St George, with temperatures reaching and exceeding 100ºF (38ºC) in June, July, and August.

St George is a popular tourist destination in the state of Utah, holding various annual events and festivities like the Huntsman World Senior Games and St George Marathon. The city is also home to many museums and landmarks like the St George Children's Museum, the Rosenbruch Wildlife Museum, Historic Ancestor Square, Pioneer Park, Red Hills Desert Garden, and more. There’s a lot to see in St George, especially for people who like to spend time outdoors.

5 Best Things to Do in South Jordan, UT