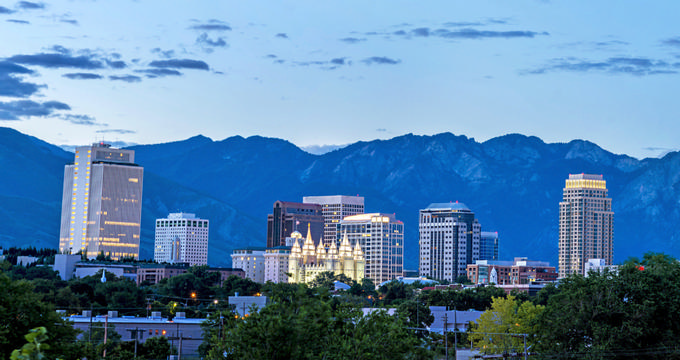 Surrounding by beautiful scenery, Salt Lake City is the capital and most populous city in the state of Utah. Located in the northern part of the state, not too far from the border with Wyoming, Salt Lake City is located in Salt Lake County and covers an area of approximately 110.4 square miles. The city has an estimated population of over 200,000 people, with more than 1.2 million in its surrounding metropolitan area. Salt Lake City also has close links with Ogden and Provo, forming a combined statistical area with these cities that houses over 2.5 million people. 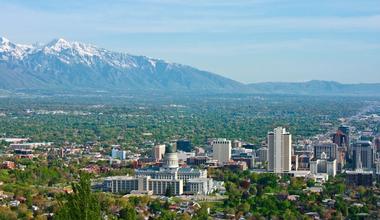 Salt Lake City is best known as the global headquarters of the Church of Jesus Christ of Latter-Day Saints, also commonly known as the Mormon Church, and it was followers of the Mormon faith who founded the city. Brigham Young, an early Mormon leader, was responsible for creating Salt Lake City in 1847. He, along with other Mormons, were trying to find a new place to live away from violence and judgment in other parts of the United States. The group arrived in the Salt Lake Valley and Young picked a spot for the Salt Lake Temple to be built. The rest of the city was constructed around this spot and the city was named after the nearby Great Salt Lake.

Mining, railroad construction, and major immigration from other followers of the Mormon faith helped Salt Lake City grow into a major cultural and commercial center for the state of Utah. The city's status remains strong to this day, with Salt Lake City having a solid reputation as a wonderful tourist spot, particularly for outdoor enthusiasts. The 2002 Winter Olympics were famously held at Salt Lake City and many outdoor activities can be enjoyed nearby.

Elevation is an important geographical term denoting the height of a town, city, mountain, or other location in relation to sea level. The elevation of Salt Lake City is very high at 4,226 feet (1,288 m). Most big cities around the United States have much lower elevations than this, with the three biggest cities in the country, New York, Los Angeles, and Chicago, having elevations of 33 feet (10 m), 285 feet (87 m), and 594 feet (181 m), respectively.

3.Climate and Things to Do in Salt Lake City

Tourism has always played a big part in Salt Lake City's economy but saw a major surge in the wake of the 2002 Winter Olympics, which really showed off the beauty of the city and its surrounding landscape. Lots of outdoor activities like skiing, mountain biking, climbing, mountaineering, hiking, and more can all be enjoyed around Salt Lake City. For something a little more relaxing, the city also has lots of restaurants, live shows, bars, and historic buildings like the Union Pacific Depot and Salt Lake Temple.