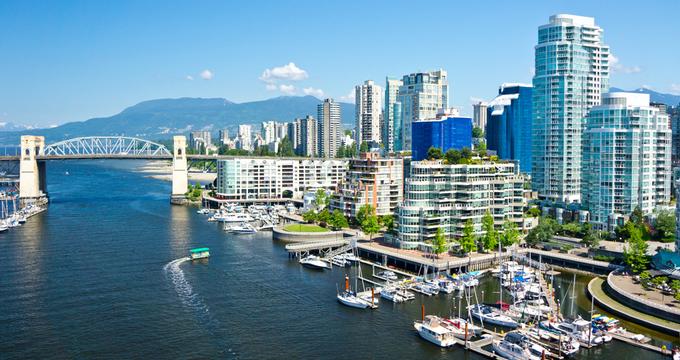 Vancouver can be visited at any time of the year depending on what you want to do and see - its weather is mild all year long. Winter time is chilly to cold, but Vancouver is a good place to stay if you want to check out the ski slopes at Whistler or Grouse Mountain. Summer is the warmest time of the year - many people consider this the best time to visit Vancouver partly because schools are on break. The weather is pleasant, but with the crowds and the higher room rates, you might want to consider one of the non-peak seasons. From March to May and from September to November the weather is comfortable and room rates are reasonable.

In January, Vancouver experiences the coldest weather of the year. High temperatures average at 43°F (6°C) while the low temperature averages hover at 34°F (1°C).

March continues with the upward trend of temperatures. High temperatures rise to 50°F (10°C) and the low temperatures increase a single degree to 37°F (3°C). The precipitation averages are relatively high at 110mm.

In July, Vancouver experiences its driest month annually with a precipitation rate of 40mm. It also receives the highest daily average of sunshine at 13 hours. High temperature averages and low temperature averages continue to rise to 70°F (21°C and 55°F (13°C) respectively.

August is the hottest month of the year in Vancouver with the average high temperature peaking at 72°F (22°C). The average low temperature rises to 57°F ( 14°C), which is the exact same measurement for Vancouver’s sea temperature.

Vancouver Weather in September: Things start to cool back down in September with the high temperature decreasing to 64°F (18°C). The low temperature average also sees a decrease measuring in at 52°F (11°C).

In November, Vancouver experiences the wettest month of the year with an average precipitation rate of 200mm. The high and low temperatures are 46°F (8°C) and 37°F (3°C) respectively.

December has the lowest daily average of sunshine with just 4 hours per day. The average high temperature goes down to 43°F (6°C) while the average low temperature decreases to 34°F (1°C).

March to May has the most enjoyable weather of the year as the spring climate is temperature. For the best of spring foliage, it’s ideal to visit Vancouver in April. Summer is the most popular time to visit Vancouver thanks to the warm weather and a milieu of outdoor activities just waiting to be enjoyed. Easy hiking and trekking is also great during this time. Winter sport lovers will have a fantastic time challenging the slopes near Whistler or Grouse Mountain in January. For the best winter festivals, come in January or February to catch the Festival of Lights, the Polar Bear Swim and the PuSh International Performing Arts Festival among others.

2.Getting to Vancouver, Canada

There are several ways to get to Vancouver. Many people fly into the Vancouver International Airport located just 25 minutes from the downtown area. Train lovers are in luck: Canada’s RIA Rail offers service from Toronto to Vancouver with stunning scenery in between. There is also a luxury train called the Rocky Mountaineer that runs through the spectacular scenery of the Rocky Mountains. Amtrak runs its Amtrak Cascades from Eugene, Oregon to Vancouver via Portland and Seattle. By car, Highway 1 runs to Vancouver from the east and Interstate 5 goes north from Seattle to Vancouver. Greyhound provides daily service between Vancouver and other cities in Canada as well as Seattle.

Next read: 25 Best Things to Do in Vancouver, British Columbia

3.Getting From the Vancouver Airport 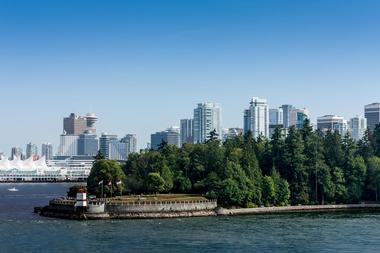 To get from the Vancouver International Airport into the city, you have several options. There are car rental agencies with desks at the airport: some people rent cars in order to get into Vancouver, and then use them to get around the city. The SkyTrain’s Canada Line is a rapid rail service between the airport and downtown: trains leave every seven minutes. There are 16 stops along the way, but it only takes 26 minutes to get into downtown Vancouver where Waterfront is the terminus for the line. In addition to single fares you can buy one of several passes. There are also taxis and limousines at the airport.

4.Information for Visitors in Vancouver 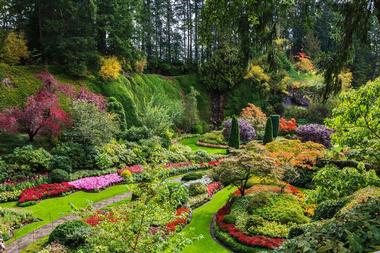 Vancouver’s official visitor information center is called Tourism Vancouver Visitor Centre and it is located on Burrard Street very close to the Vancouver Convention Centre. Friendly multi-lingual staff will help visitors with all of their plans including where to eat, where to shop, where to stay, what to see and do, and how best to get around in the city. The highly trained professional staff will help you map out an itinerary to fit your plans. There are brochures, maps, and tourist guides at the center. They also offer discounted tickets for attractions, sightseeing tours, ski lift tickets, and much more.

5.Getting Around Vancouver by Bus, Rail 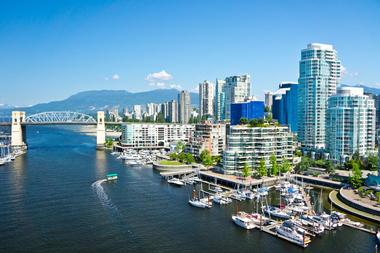 
Vancouver’s public transportation system is called TransLink: it provides a way for visitors to get to attractions by using public transportation. The system is made up of a large network of buses as well as SkyTrain. Buses run throughout the day with a more limited NightBus service during the night. Many buses travel down Burrard Street, Georgia Street, and Granville Street. The SkyTrain is a completely automated light rail transit system. It provides fast service between downtown Vancouver and its suburbs: trains run every two to five minutes. There are three lines: the Expo Line, the Millennium Line, and the Canada Line.

6.Getting Around Vancouver by Water bus, Ferries across False Creek 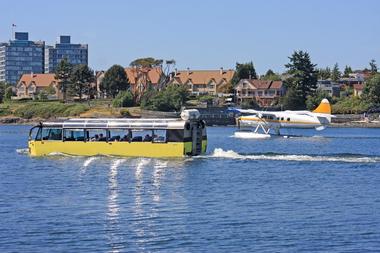 
In addition to the buses and SkyTrain, TransLink operates the SeaBus. It is a passenger only ferry service the runs between the Waterfront Station in downtown Vancouver to Lonsdale Quay on the North Shore. Ferries depart every 15 minutes during the day and every 30 minutes at night. The trip only takes 12 minutes, but this crossing of Burrard Inlet gives passengers stunning views of the mountains, the sea, and the city. There are two companies, Aquabus and False Creek Ferries, that operate small passenger ferries that cross False Creek: this is the body of water that flows to the south of the downtown peninsula.

7.Getting Around Vancouver On foot, by Taxi, Car 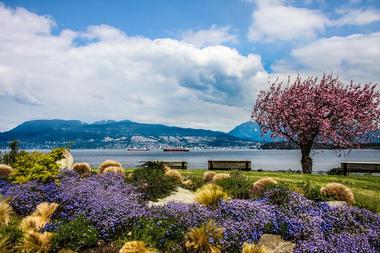 Getting around Vancouver on foot is a viable option: many of the attractions and neighborhoods are within walking distance in this compact city. The streets are laid out on a grid and this helps to make navigating the city center very easy. It takes just 30 minutes to cross the peninsula from north to south, and about an hour to cross from west to Chinatown in the east. There are many taxis in Vancouver and they are easily found in front of major hotels and attractions. If your accommodations are in the city, you don’t really need a car. Parking is scarce and expensive and traffic can be congested. 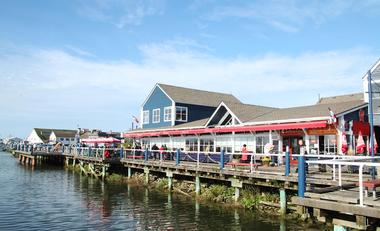 Vancouver is a diner’s paradise: eateries range from fine dining restaurants to wine bars, cocktail lounges, tasting rooms, bakeries, farmer’s markets, and food trucks. People who live in Vancouver are very passionate about their dining scene. In addition to the fine dining restaurants there are small bistros where young chefs are creating new dishes every day. It might be a casual looking bistro, but the food you are served will be superb. Many chefs insist on using local ingredients like seafood from the Pacific Ocean, mushrooms from nearby mountains, and organic produce. Sitting on the Pacific Rim, Vancouver is the home of many restaurants that serve both Asian and European fare. 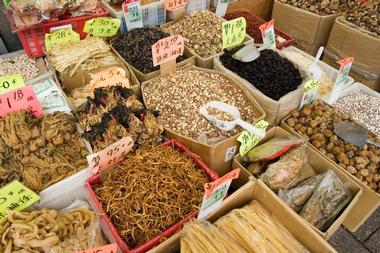 Vancouver is known for many things: its restaurants, its natural beauty, and much more. But it is also known for its shopping. Many visitors enjoy doing some shopping while in Vancouver whether it’s souvenirs, luxury designer items, or vintage clothes. There are large shopping malls, in which visitors can find popular brand items as well as international designer shops. Because of its mild climate, many shoppers prefer strolling down streets and taking a look inside trendy shops and one-of-a-kind boutiques. Another interesting shopping experience is to explore one of the Asian night markets in the Richmond area of Vancouver: in addition to items for sale, the food stalls are worth checking out. 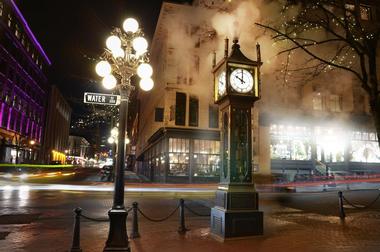 Vancouver is made up of a large number of neighborhoods. Downtown features shopping, cafes, “Theatre Row” with its many venues, and the 1,000 acre Stanley Park with its Vancouver Aquarium. Gastown is northeast of downtown and is a popular tourist area because of its Old World charm with its cobblestone streets and Victorian architecture. Vancouver’s Chinatown is the third largest after San Francisco and New York. At one time Yaletown was full of abandoned warehouses: now it is one of Vancouver’s hottest nightlife spots. Granville Island is the home of the Granville Public Market and artists’ workshops. Other neighborhoods include Kitsilano, Point Grey, East Vancouver, West Vancouver, and North Vancouver.

11.Getting Married in Vancouver 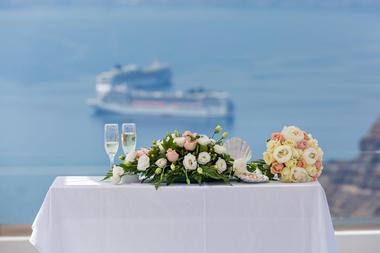 With its stunning natural beauty, Vancouver is a popular place to have a wedding. Canadians and non-Canadians can get married in Vancouver. A marriage license can be obtained at any of the many Marriage License Issuers’ Officers in Vancouver. Some of the hotel wedding venues include the Four Seasons Hotel Vancouver, the Westin Grand Vancouver, the Empire Landmark Hotel, and more. If you are interested in getting married on the water, try Celebration on Water or the Wedding Yacht. Other wedding venues include the Croatian Cultural Centre, The Museum of Vancouver, the Scottish Cultural Centre, Top of Vancouver Revolving Restaurant, Vancouver Aquarium, and the Vancouver Art Gallery.

12.Where to Stay in Vancouver 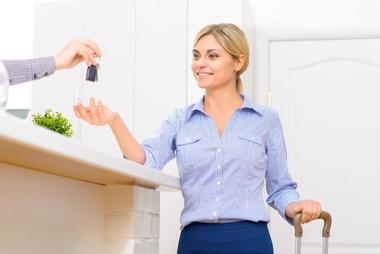 Vancouver offers a wide range of accommodations from historic old hotels to luxury properties, bed and breakfasts and inns, and budget and family-friendly hotels. Most of the hotels are located in the downtown area and the West End. Some of the luxury hotel properties are the Rosewood Hotel Georgia built in 1927, the Fairmont Pacific Rim, the Shangri-La Hotel Vancouver, Wedgewood Hotel and Spa, and more. On Granville Street there are affordable hotels like the Best Western Downtown Vancouver and the Ramada Inn and Suites. These hotels are well located for visitors to see the attractions but room rates are not high. There are also apartment rentals.

25 Best Things to Do in Ontario

25 Best Things to Do in Montreal, Canada

25 Best Things to Do in Victoria, BC