15 Best Things to Do in The Dalles, Oregon 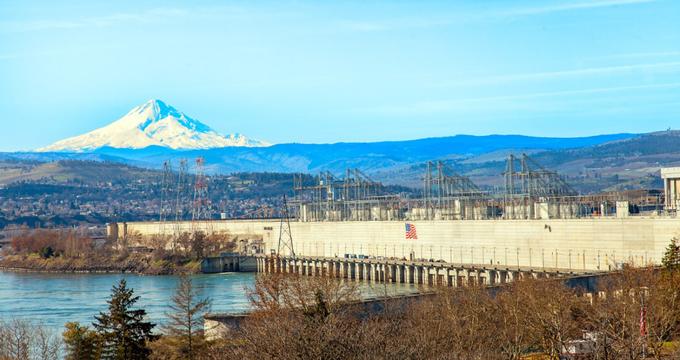 The city's name is derived from the French word 'dalle' which refers to the columnar basalt rock or flagstones found in the area. The Columbia River flowed over the rocks causing a long series of major rapids in the area. There was a large Native American trading post on the Quenett Creek and the explorers, Lewis and Clarke, camped in the area in 1805. Jason Lee, a Methodist missionary, evangelized the Wasco Indians and Fort Dalles was established in due course. Until 1846, the Oregon Trail stopped in the area, before it continued to Portland. In 1857, the settlement became a city and changed its name to The Dalles in 1860. 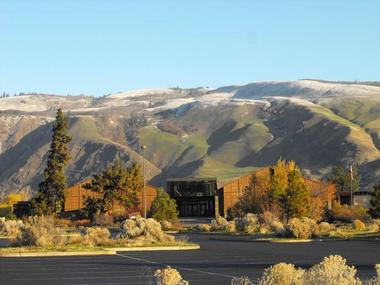 The museum's mission is to inspire appreciation and stewardship of the Columbia River Gorge and Wasco County. The 48200 square foot building, which was honored by the American Institute of Architects, is set on 54 acres of land, adjacent to the river and the Historic Columbia River Highway. The natural garden is in the transition zone between the forests of the Cascade Mountains and the arid areas to the east. There are walking trails with scenic views of the gorge. Exhibits explain how volcanic activity and floods shaped the gorge. The Columbia River Trading Company sells handcrafts from the region as well as books, art, jewelry and toys.

-- You are reading "15 Best Things to Do in The Dalles, Oregon" Back to Top 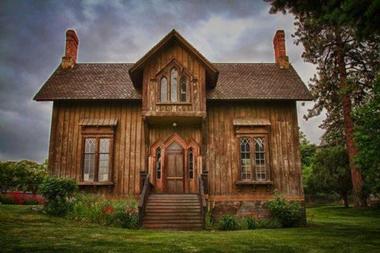 The museum is situated in what remains of the 1856 Fort Dalles military complex. A barn, shed and two homes, including the surgeon's quarters, have been restored and depict life in Oregon in the 1800s. Tools and personal items from the complex are among the articles on display. The Anderson Homestead which was built in Pleasant Ridge in 1895, was moved to the museum in 1971. It comprises a log house, granary and barn. Entry is included in the museum entrance fee. The museum also has a collection of wagons, antique vehicles and vintage cars, including a stage coach, covered wagons and horse-drawn hearses.

-- You are reading "15 Best Things to Do in The Dalles, Oregon" Back to Top 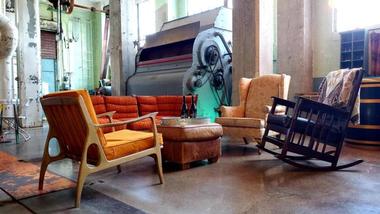 Wheat was milled in the Sunshine Mill for 130 years. It was the first building in The Dalles to use electricity, by virtue of its Thomas Edison motor, which can still be seen in the mill. The Sunshine Biscuit Company was started on the premises which used the flour that was milled. The Quenett winery began operation in the disused mill in 2002, followed by the Copa di Vino winery in 2009. Wine tasting and antipasto platters are offered on the premises, which are also available for hire for functions such as weddings. The massive silos make an interesting backdrop for photo shoots. 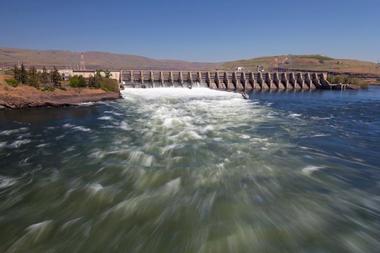 The Dalles Dam spans the Columbia River about two miles east of the town and links Wasco County, Oregon to Klickitat County, Washington. The dam was built between 1952 and 1957 by the US Army Corps of Engineers. It generates hydroelectricity and is managed by the Corps. The reservoir has been named Lake Celilo and stretches back 24 miles. Celilo was the name of the Native American trading and fishing village that was submerged, along with several waterfalls, when the dam flooded. Forty panels of rock carvings were removed and installed in the Columbia Hills State Park on the Washington side of the river.

-- You are reading "Fun Things to Do in The Dalles, Oregon this Weekend with Friends" Back to Top

5.The Dalles Murals, The Dalles, Oregon 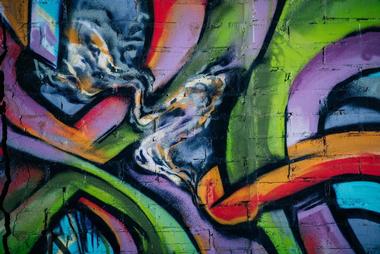 
This initiative began in 1993 in order to pictorially preserve the historical events in the area. Sixteen murals were painted around The Dalles' downtown area by various artists, native to the north west. Thirteen of the murals have 'voice boxes' which elaborate on the illustrations. In 2013, a project to light up all the murals was begun. The murals cover topics such as Native American history, the exploration of the area by Lewis and Clarke, the pioneers on the Oregon Trail and the Celilo Falls and village. Postcards of the murals, as well as limited edition wines, are sold to raise funds for the project.

-- You are reading "What to Do in The Dalles, Oregon this Weekend" Back to Top 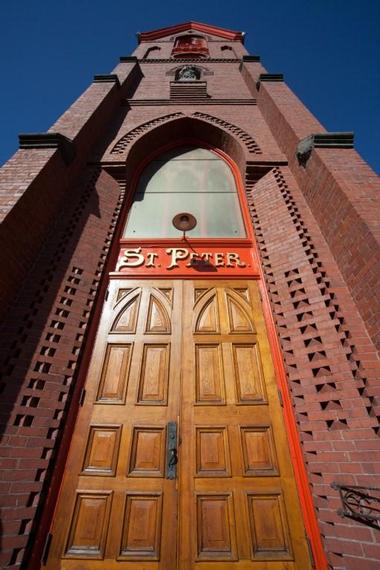 
St Peter's Catholic Church was built in 1897. By the 1970s, there were plans afoot to replace it with a bigger church with easier access for senior citizens. The incumbent Monsignor wished to demolish the original church and sell the bricks. Concerned citizens formed the Old St Peter's Landmark and raised the $25000 needed to buy the church and all its contents, including the pipe organ and stained glass windows. They offered a membership subscription and sold $1 postcard 'bricks' and copies of a Rooster book written for the occasion. Admission is free though donations are welcome. The church is hired out for weddings, music concerts and other events.

-- You are reading "Top Romantic Tourist Attractions in The Dalles, Oregon" Back to Top 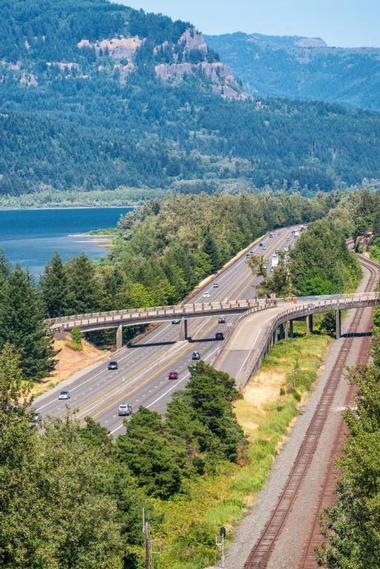 The historic highway was built between 1913 and 1922, as the first scenic highway in the USA. By 1960, a section, about 50 miles from The Dalles, had been replaced by the I-84. The twelve-mile section was abandoned and the tunnels filled with rocks. In the 1980s, an initiative was undertaken to restore and preserve the section of the historic highway as a series of three hiking trails and a bike path. During the restoration, graffiti that had been written by snowbound motorists in 1921, was discovered. In 2000, the historic highway was designated a National Historic Landmark and in 2002, the trail was listed as a National Recreation Trail.

-- You are reading "What is There to Do with Kids in The Dalles, Oregon" Back to Top 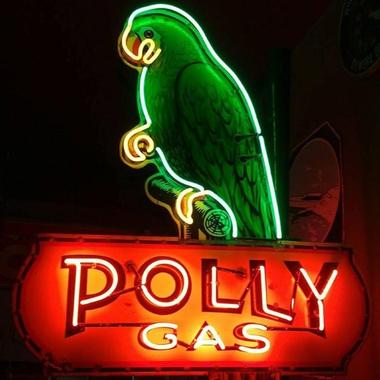 As a result of his work in the electrical advertising field, David Benko not only gained knowledge but amassed a collection of samples of the industry. When he was looking for a venue to house his collection, The Dalles' councilors offered him the historic three story Elk Lodge building for $1 if he could stimulate tourism in the town. In 2018 the museum opened with 20000 foot of pre-electric and electric signage, gold leaf and plastic advertising, signage and ephemera on display. The museum chronicles the role advertising played in the culture, history and economy of the country.

9.Wonderworks Children's Museum of the Gorge 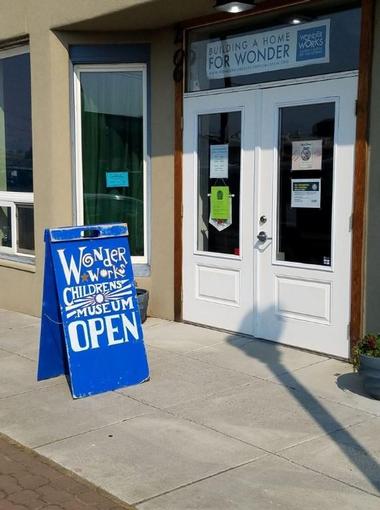 © Wonderworks Children's Museum of the Gorge

The museum was started by two mothers who wanted their children to learn by doing. The first five exhibits were housed in the Carnegie Library and made use of all five senses. The museum suffered mixed fortunes until 2009 when it acquired a 5000 square foot facility with the option to purchase. Since then the building has been bought and 2000 square feet of activities developed. These include a creativity zone, a dinosaur corner, a quiet area to read and learn and various themed play areas. Visitors can practice being magicians, actors, puppet masters and musicians. All ages are welcome, including infants.

, Michigan beaches -- "Best Things to Do in The Dalles, Oregon for Locals & Tourists - Restaurants, Hotels" Back to Top 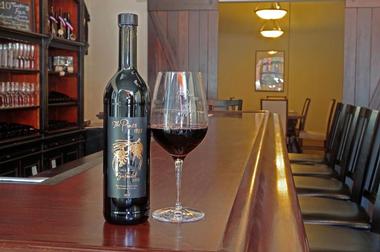 Lonnie Wright's relationship with The Pines, outside The Dalles, started in 1982. The then owner found a neglected Zinfandel vineyard on the property, thought to have been planted in the mid- to late 1800s. Lonnie, having viticulture experience, landed the job of restoring it. After extending the plantings of Zinfandel and adding Merlot and Syrah vineyards, Lonnie was asked to move to the farm. In 2002, he was able to purchase the property and started producing estate wines. There are now 19 wines in his portfolio. His daughter, Sierra, runs the Pines Guest House and opened a tasting room in Hood River, 25 miles from The Dalles.

The Granada Theater was built between 1929 and 1930, in the Moorish Revival style. It was the first theater west of the Mississippi to show a talking movie. William Cutts of Portland who designed several of Universal Film Corporation's theaters, also designed the Granada. It is part of The Dalles Commercial Historic District and was bought by the city in 2010. The art deco interior is divided into several small theaters which are used for musical events, comedy evenings and private functions. The Spotlight Café, a Chicago-style cocktail lounge and restaurant, is on the premises. The inaugural Festival of Jazz was held at the theater in May 2019.

-- "New cool stuff to do in The Dalles, Oregon" Back to Top or Romantic Getaways

12.Baldwin Saloon, The Dalles, OR 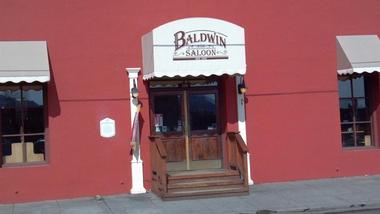 The saloon was established by the Baldwin Brothers in 1876, alongside the railway track. Several of those attracted to the area by the gold rush, made the saloon their headquarters. 'Doctor' Allen, a spectacle salesman, purchased it and is responsible for the medical insignia on the building and cast iron facade. The saloon was later used as a saddle shop and coffin storage facility before being restored in the 1990s to its original state and purpose. The 18 foot mahogany bar, early 20th century oil paintings and crank-handle cash register, from the 1920s, add to the ambiance. The extensive menu promises a taste of history. 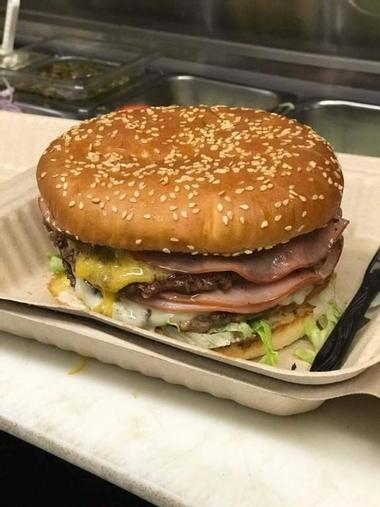 Big Jim's has been in business since 1966. Their huge burgers are made with a third of a pound of the finest, freshest beef from Oregon and Washington. All the dressings and sauces are made on the premises and the burgers are made to order, not ahead of time. There is a vast selection of burgers to choose from. Proceeds from the Red, White and Blue burgers go towards an annual fireworks display on 4 July. For dessert, there are waffles and 16 flavors of ice cream to choose from. Big Jim's is close to the highway and offers a drive through service and clean restrooms. 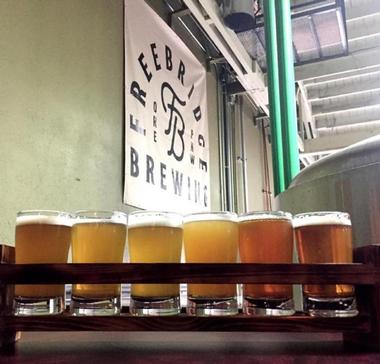 The brewery is named after the freebridge across the Deschutes River, south of The Dalles. It was the alternative to the toll bridge and was mysteriously blown up in the 1920s. The owners are a fifth generation Oregon family, of farmers and pioneers, some of whom possibly crossed the freebridge on their arrival. The brewery is housed in the restored 'Mint', a building intended to store and mint gold during the Rush. Today, liquid gold flows, through the tank taps and in the kitchen where it is used to make the cheese for pizzas and other meals.


Free points of interest close to me: Things to Do in Half Moon Bay, Where to get married, New York castles 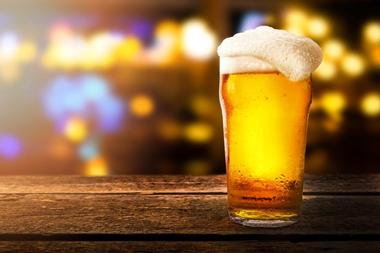 This bar, restaurant and hotel is aptly named for several reasons. It was established in 1898 and was previously a 'place of negotiable affection', occupied by madams and frequented by ruffians, many just a step away from jail. It is situated in The Dalles which until the 1840s was the end of the Oregon Trail. The owners also feel it is their 'last stop' before they formally retire. They have restored many of the original features of the building inside and out, some of which were hidden for decades. They offer accommodation, home-cooked meals and 20 varieties of local craft beer.

-- You are reading "15 Best Things to Do in The Dalles, Oregon" Back to Top or Amazing things to do around me

15 Best Things to Do in The Dalles, Oregon

You are reading "15 Best Things to Do in The Dalles, Oregon " Back to Top

20 Best Things to Do in Corvallis, Oregon

12 Best Things to Do in Sherwood, Oregon

20 Best Things to Do in Florence, Oregon