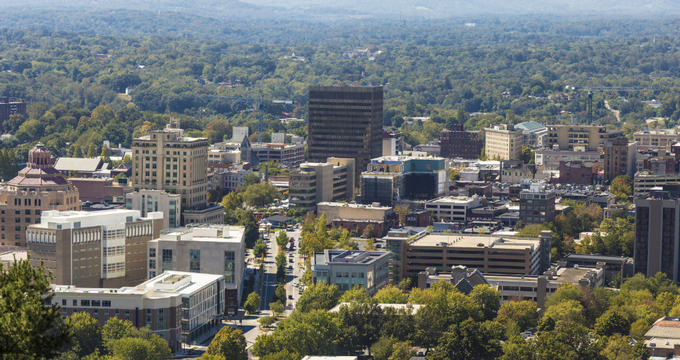 The biggest city in the western side of Northern California, Asheville is the 12th most populous city in the state overall and is the county seat of Buncombe County. Notable for its live music culture and historic architecture, Asheville is a key tourist destination in North Carolina. The city covers an area of 45.3 square miles in total, with a population of approximately 90,000 people. Over 400,000 people live in the surrounding Asheville metropolitan area.

The land that would eventually become Asheville, NC was once inhabited by the Cherokee Nation. A Spanish explorer came to the area in the mid-16th century, but the town wasn't founded until many years later. In 1784, a man named Samuel Davidson settled in the area but was killed by Cherokee hunters. Some time later, his twin brother and brother-in-law returned to avenge his murder and then founded the town in the same location. The creation of a railroad in the town in 1880 helped to give Asheville a big boost and the city thrived in the early 20th century.

Nowadays, Asheville isn't one of the biggest cities in North Carolina but is still a popular place to live and visit, with tourism playing a big role in the city's economy. Live music shows and festivals are every popular in and around Asheville, with a lot of street performance and outdoor entertainment of all kinds. The city is also known for various monuments and buildings like the beautiful Biltmore Estate and the iconic Art Deco-themed City Hall. The huge boost in tourism in recent years has allowed small businesses to prosper and the city is classed as a very desirable place to live.

Whenever we look at the statistics of a town or city, surface area and population are important factors, but elevation is another key aspect to consider. The elevation of a city shows us how high it is in relation to sea level. Asheville, NC has an elevation of 2,134 feet (650 m), which is very high when compared to most other big cities around the United States. Most of the nation's largest metropolitan areas are situated along coastal areas and have elevations lower than 500 feet (152 m). Asheville's relatively high elevation is due to its inland position and situation among the Blue Ridge Mountains.

In terms of elevation, North Carolina is among the lowest states in America. It has a mean elevation of just 700 feet (210 m), which is higher than other states like Florida or South Carolina, but much lower than many others like Arizona, Utah, Wyoming, and Colorado. When compared with the average elevation in the state, the elevation of Asheville, NC is much higher. The highest point in all of North Carolina is Mount Mitchell, part of the Appalachian Mountains, which has an elevation of 6,684 feet (2,037 m), while the state's lowest point is the Atlantic Ocean, which is at sea level.

3.Climate and Things to Do in Asheville, NC 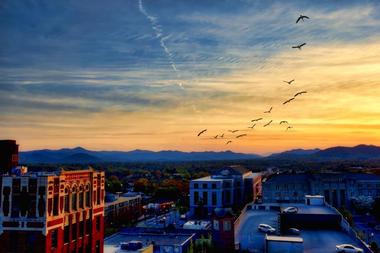 The city of Asheville has a humid subtropical climate resulting in relatively wet and warm weather for large parts of the year. The city's elevation plays a part in its climate as temperatures get cooler at higher altitudes. Summers in Asheville are generally very warm, with average highs of 84°F (29°C) in July, which is the hottest month of the year. When the winter rolls in, the temperatures in Asheville can drop as low as 27°F (-3°C) in January. The city sees steady rainfall all year long, with that rain often turning to snow in January and February.

There are plenty of attractions and things to do in Asheville. The city is well-known in particular for the Biltmore Estate. This historic mansion was built back in the 19th century and is home to priceless paintings and beautiful gardens. Other attractions in the area include the Art District, home to many museums and galleries, and nearby nature areas like the North Carolina Arboretum and Pisgah National Forest. No matter what kind of activity you’re looking for, you’ll find it in Asheville, NC.