6 Best Things to Do in Abiquiu, NM 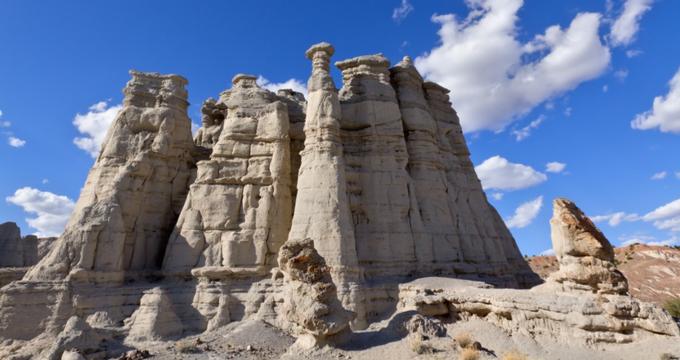 Abiquiú is a small census-designated village located in Rio Arriba County, in northern New Mexico, about 53 miles from Santa Fe. Abiquiú was the home of artist Georgia O'Keeffe from 1929 until 1984. The Georgia O'Keeffe Home and Studio is loc ated in Abiquiú. Ghost Ranch is a 21,000-acre retreat and education center that offers a range of programs and exciting adventures. Echo Amphitheater is a fascinating natural amphitheater linked to the legend of blood and murder. The Monastery of Christ in the Desert in Abiquiu, New Mexico is a Roman Catholic Benedictine monastery surrounded by miles of untouched wilderness of the Chama River Canyon Wilderness . Dar al-Islam is a Muslim educational center and the first planned Islamic community in the US. 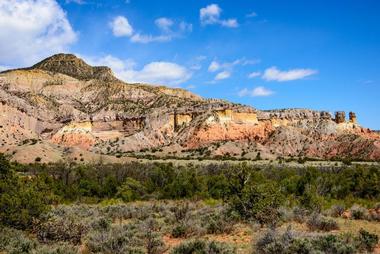 Located near the village of Abiquiú in Rio Arriba County in New Mexico, Ghost Ranch is a 21,000-acre retreat and education center that offers a range of programs and exciting adventures. The Ranch is committed to guests’ spiritual development, peace and justice. It celebrates the environment and family through art, culture and nature. Open year-round, the Ranch is owned by the Presbyterian Church USA and is open to all. The magnificent landscape of vivid colors, towering rocks and enormous skies was made world-famous by painter Georgia O’Keeffe, who lived and worked on the ranch for a while. Today, people come to the Ranch from all over the world come to paint, write poetry, to hike, ride horses, to research the surrounding archaeological and fossil quarries or just to rest and renew their spirits.

Located among the sandstone cliffs of New Mexico, near the village of Abiquiu, in the Carson National Forest, Echo Amphitheater is a fascinating natural amphitheater linked to the legend of blood and murder. In the spring of 1861 a group of settlers from Iowa was farming in northern New Mexico when a band of Navajo took them to the top of the amphitheater and executed them. In retribution, ten Navajo men were killed at the top of the amphitheater when the Navajo were being forced on the "Long Walk" by the U.S. Army three years later. The red vertical stripes that run down the horizontally stratified cliff wall are streaks of mineral varnish, but the legend explains them as the blood that seeped into the rock and is still visible today. The natural amphiteater’s echoing auditory properties are explained as the anguished cries of the dead still echo from the cliff's walls. Since the legend is more interesting than the fact, Echo Amphiteater is a popular tourist destination.

3.Monastery of Christ in the Desert

The Monastery of Christ in the Desert in Abiquiu, New Mexico is a Roman Catholic Benedictine monastery that belongs to the English Province of the Subiaco Congregation of Benedictine monasteries. The monastery is surrounded by miles of untouched wilderness of the Chama River Canyon Wilderness area accessible by Forest Road 151. The monastery was founded by Aelred Wall, O.S.B., a monk of Mount Savior Monastery in Pine City, New York in 1964. The monastery provides sanctuary to men from many nations. English is the common language of the house. Christ in the Desert has a guesthouse in which men and women can stay and join the monks in the chapel and share the monastic Divine Office and the Mass. The monks also manage a gift shop that sells books and religious items, work on the land, create crafts, do computer work and maintenance of the grounds and facilities. The monastery is powered entirely by solar power and it has one of the largest private solar power systems in the US,

Purple Adobe Lavender Farm was established in 2004 in the picturesque Chama River Valley near Abiquiu, New Mexico. Abiquiu is known for the magnificent views, colorful mountain slopes and Chama River. It is the place where the painter, Georgia O'Keeffe lived, painted and made famous through her art. Purple Adobe Lavender Farm has planted 2500 lavender plants in the terrain with its sandy soil, high altitude, and strong sunlight, the perfect location for growing lavender. We harvest, sell and distill the lavender flowers to use in various lavender products. We also offer educational programs and information on growing lavender, provide consultation, and sell lavender bath and body product line at our gift shop and in local stores.


Located near Abiquiú, New Mexico, Dar al-Islam is a Muslim educational center and the first planned Islamic community in the US. It was originally co-founded in 1979 by Nuridin Durkee, an American who had converted to Islam, Sahi Kabbani, a Saudi businessman and Abdullah Omar Nasseef, a former secretary-general of the World Muslim League. The non-profit Lama Foundation was formed to create the community and the foundation bought the first 1,000-acre site along the Chama River. At its peak, the community had about 60 students and seven full-time teachers. The community never became a thriving residential community for American Muslims as intended, but it did manage to stay viable as an educational facility. Today, Dar al Islam provides religious instruction, camps and retreats for its residents and visiting Muslims. It also offers teaching workshops on Islam for public and private institutions.

6.In Sync with Horses


Located in Abiquiu, New Mexico, on a secluded, high, dramatic mesa, In Sync with Horses is the place for anyone who loves horses. They create unique private equine experiences for visitors in the Santa Fe-Abiquiu-Taos area. Their Hands-On Horsemanship teaches riders to move a 1,000-pound horse with just a wave of your hand. The Horseplay! Days are for the kids and kids at heart, One-on-one Tall In The Saddle experience is designed to help experienced riders regain their confidence. Cowboy/Cowgirl Up! Offer true western riding instruction. And if their menu doesn't have exactly what you want, they will create Custom Equine Experiences for you.

6 Best Things to Do in Abiquiu, NM