5 of the Largest Cities in Mississippi 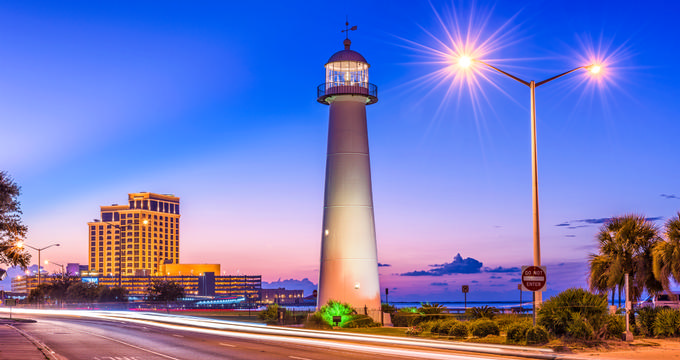 Located in the southeastern section of the United States, Mississippi is the 32nd largest state by both area and population. The state is named after the Mississippi River, which flows along its western border. Mississippi has borders with Tennessee, Louisiana, Arkansas, and Alabama, with a small section of coastline on the Gulf of Mexico. The state covers an area of 48,430 square miles and has an estimated population of 2.98 million people. 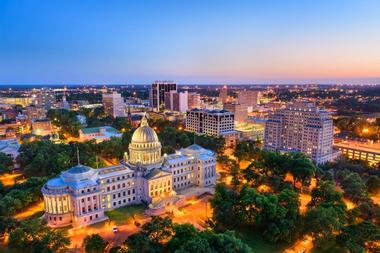 Situated in Hinds County, Rankin County, and Madison County, the city of Jackson is the capital of Mississippi. It's also the biggest city in the state and is the only Mississippi city to have a population exceeding 100,000. Jackson is situated in the central part of the state on the Pearl River and covers an area of 113.2 square miles. The estimated population of Jackson is 165,000, with over 575,000 in the surrounding metropolitan area.

The city was named after Andrew Jackson, the seventh President of the United States. Jackson is known as 'The City with Soul' for its strong blues and folk music scene, and is also the number one touristic, cultural, commercial, and industrial hub of Mississippi. Major landmarks in Jackson include the Mississippi Governor's Mansion, State Capitol Building, Jackson Zoo, and Mississippi Civil Rights Museum. 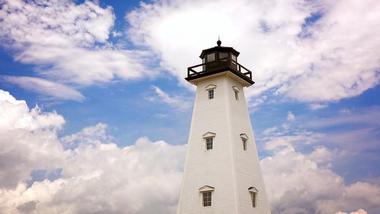 Located in Harrison county, Gulfport is the second biggest city of Mississippi. This city is located on the southern coast of the state and covers an area of 64.2 square miles. The estimated population of Gulfport is 71,000, with approximately 382,000 people living in the surrounding metropolitan area. Gulfport was named due to its situation as a port city on the Gulf of Mexico.

This city forms the Gulfport-Biloxi Metropolitan Statistical Area alongside Biloxi and hosts several unique annual events like the World's Largest Fishing Rodeo and Smokin' the Sound speedboat races. Gulfport is also a key tourism city of the state of Mississippi due to its coastal location and many casinos. 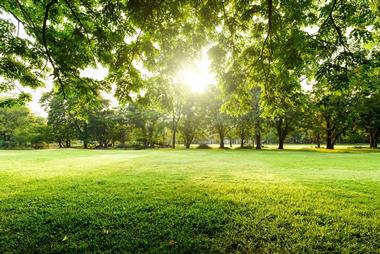 Located in DeSoto County in the northern part of the state, Southaven is the third largest city of Mississippi. Due to its close proximity to the Tennessee border, this city is actually a suburb of Memphis and is included as part of the Memphis metropolitan area. Southaven covers an area of 41.5 square miles and has an estimated population of 54,000.

It's one of the fastest-growing cities in all of Mississippi and has a strong economy when compared to other cities around the state due to its key location near Memphis. The city's name comes from the fact that it is situated directly south of the Memphis community of Whitehaven. 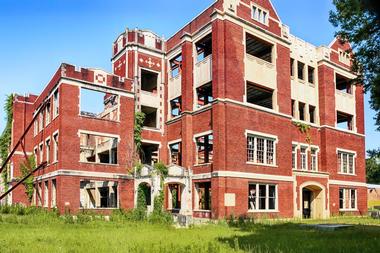 Mostly situated in Forrest County but also extending slightly into Lamar County, Hattiesburg is the fourth largest city in the state of Mississippi. This city, nicknamed 'Hub City', is located in the south-central part of the state and is home to The University of Southern Mississippi, as well as William Carey University, making it a key educational hub for the state.

Hattiesburg covers an area of 54.3 square miles and has an estimated population of 46,000, with over 148,000 in the surrounding Hattiesburg Metropolitan Statistical Area. The city was founded in 1882 by William H. Hardy, who decided to name it in honor of his wife, Hattie. Hattiesburg is also notable for being home to Camp Shelby, the biggest National Guard base on the eastern side of the Mississippi River. 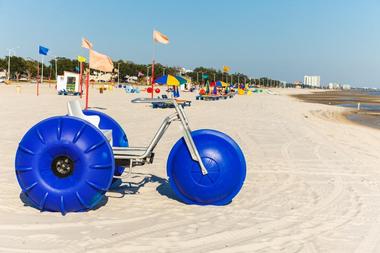 
Located in Harrison County, nearby the other large city of Gulfport, Biloxi is the fifth biggest city in the state of Mississippi. This is a port city, located on the southern edge of the state, with a long stretch of popular touristic beaches directly on the Mississippi Sound.

Biloxi covers an area of 46.7 square miles and has an estimated population of 45,000, with more than 379,000 in the surrounding metropolitan area. The name of the city was taken from a Native American word and has also been spelled Bilocci throughout history. Biloxi is a popular tourist location due to the beaches, lighthouse, and nearby barrier islands.


5 of the Largest Cities in Mississippi

Today, the MDWFP Museum of Natural Science has become an enormous museum with an array of interactive, exciting, and educational opportunities for every visitor.

· Earth is Our Neighborhood

· History of the Museum

· Old Pond Trail is an easy and general nature trail that encompasses the MDWFP Museum of Natural Science’s pond.

· Overlook Loop is a moderate trail that goes just a little bit further than the Old Pond Trail.

· Cypress Swamp Trail is a challenging trail that runs alongside the bodies of water along the MDWFP Museum of Nature Science.

· Old River Run is a challenging trail that does not loop.

Through the field trip opportunity, schools are welcome to travel to the MDWFP Museum of Natural Science to use and explore their facilities to gain a new insight into natural science. Schools can choose from any of the following field trip options to participate in:

· Self-guided Tour and Trails gives participants the opportunity to explore the indoor exhibits of the MDWFP Museum of Natural Science for one hour, then explore the natural trails for approximately 1.5 hours. Unlike the other tour options, participants in this tour will not be guided by a Museum official.

· Hands-on Program allows visitors to explore the indoor and outdoor portions of the MDWFP Museum of Natural Science, as well as participate in a hands-on activity with a museum official. During the 30 to 45 minute hands-on program, a museum official will lead an interactive and educational class about any of the following topics: fossils, birds, fish, endangered species, plants, reptiles, invertebrates, or mammals.

· Wetlands Program is a one hour field trip opportunity offered for students in third grade and above. Through the Wetlands Program, students will work alongside renowned educators and employees from the LeFleur’s Bluff State Park to learn about, understand, and explore the fundamentals of plants, soil, and water.

Back to: Best Things to do in Jackson, MS

A 39-acre site for the museum was donated by the City of Jackson in 1978, under the stipulation that the land could only be used for educational and recreational purposes, and the same year, $1.5 million in funds was approved for museum construction by Mississippi state legislature. Government funds were matched by private donations raised by the newly-formed Agriculture and Forestry Museum Foundation nonprofit organization.

Today, the Mississippi Agriculture Museum is owned and operated by the Agriculture and Forestry Museum Foundation and serves as an educational resource communicating the past, present, and future of agricultural lifestyle and industry in the Mississippi area and the Southeastern United States. The museum complex spans 39 acres and includes a fully-recreated Small Town Mississippi 1920s-era village, serving as a replica of typical Mississippi cotton farming towns during the post-Antebellum period. A variety of businesses typical of early 20th century towns have been created for exploration, including the TBZH Print Shop, the Small Town Blacksmith shop, a gas filling station, and a general store. Social services such as a doctor’s office, church, and one-room schoolhouse are also featured, along with a grist mill, sawmill, sugarcane mill, and a replica of the Bisland Cotton Gin, which operated in nearby Natchez until 1954. A masonic lodge recreation and cultivated rose garden are also available for exploration.

The museum’s Heritage Center serves as its main entrance point for visitors and features the National Agricultural Aviation Museum, a 5,000-square-foot exhibit center chronicling the history of agricultural production through the development of aviation technologies supporting the industry. The museum is supervised by the Washington, D.C.-based National Agricultural Aviation Association, which moved its facilities to the Mississippi Agricultural Museum in 1980. A photo wall displays photographs of members of the National Agricultural Aviation Hall of Fame, including its three Mississippi members, Jess Orval Dockery and Aubrey and Jimmy Finklea. Important crop dusters and aviation aircraft are displayed, including the Stearman A75 Biplane, constructed during World War II, and the 1946 Piper J3, formerly used as a flight school training aircraft before being converted into a crop duster model.

Also included in the Heritage Center is the Mississippi Agriculture and Forestry Museum, which highlights agricultural technologies using water, railroad, and road vehicles. Two model train exhibits, an HO Scale Layout and an O Gauge Layout, are included in the museum’s railroad section. Behind the museum, the Fitzgerald Collection exhibit showcases the collected memorabilia of Frank Stanley and Erva Mae Fitzgerald, who accumulated a large collection of Mississippi Delta artifacts from local antique stores, junkyards, and auctions. Highlights of the collection include more than 17,500 Native American artifacts, a large collection of vintage and antique toys, and a 7,000-piece pencil collection listed in the Guinness Book of Records.

A number of natural areas are also highlighted within the museum complex, including the museum’s Nature Trail, which educates visitors on the relationship between farmers, the agricultural industry, and the environment. The 300-yard trail runs through 10 acres of hardwood, pine, and cypress forest area along a creek bed, featuring a variety of exhibits detailing information about native trees and plants. A nature pavilion offers opportunities for visitors to relax and observe, and picnic tables are also provided at several points. Additionally, a Specialty Crops Victory Garden features 17 raised beds with seasonal and specialty plantings, along with a worm composting station, and offers education on conservation and cropping techniques.

Guided tours of the Mississippi Agricultural Museum are offered for elementary and secondary educational groups, tailored to Mississippi curriculum standards. Self-guided audio tours of the facility are also available, along with a detailed map of the museum’s exhibit areas. Carousel rides on the museum’s classic 1928 carousel are offered Monday through Saturday for a nominal fee. On the first Thursday of every month, a Story Time with Uncle Story event is presented, showcasing agricultural and forestry-related stories read by the museum’s mascot puppet, Uncle Story. Other special events held throughout the year include an Easter egg hunt, a Pumpkin Adventure festival, a Spring Farm Days event, and a Country Christmas celebration.

More Things to Do in Jackson MS

It wasn’t until 1955, when Morgan Jones was the Association’s president that the Mississippi Art Association actively worked to building an official art museum. In the late 1900s, the City of Jackson created an initiative for a new complex that would be located near the Jackson Municipal Auditorium. On April 22, 1978, dedication ceremonies were held for the building and the museum. In order to signify the new and official developments of a museum building, the Mississippi Museum of Art was officially established in late 1979.

Since 1979, the Mississippi Museum of Art has underwent various renovations to ensure the Museum reaches its full architectural and art potential.

The Mississippi Museum of Art regularly hosts special attractions throughout the year. The Museum is so dedicated to displaying special exhibits it even has a large and dense area specifically dedicated to displaying special exhibits. For an updated list of special attractions at the Mississippi Museum of Art, check out the Museum’s website.

One of the most diverse and distinguished educational opportunities at the Mississippi Museum of Art is The Museum School. The Museum School offers children, teenagers, and adults comprehensive and unique art education classes throughout the entire year. Classes range from fundamentals of colors and paintings, to exploring the themes, messages, and influences within a specific piece of art work. Many of the art classes draw inspiration and technique from the Museum’s permanent art collection.

Back to: Best Things to do in Jackson, MS

25 Fun Things to Do in Mississippi with Kids