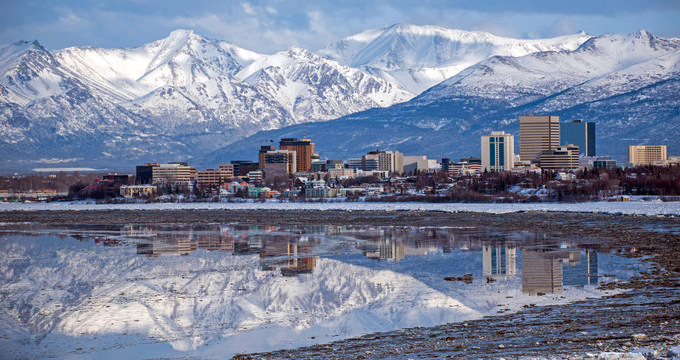 Alaska is one of the most unique states of America for a variety of reasons. Firstly, it isn't directly connected to the contiguous United States, being located in the extreme northwestern section of the continent of North America, being bordered on its eastern side by Canada. Alaska also has a maritime border with Russia at its western extremity. Alaska is the largest of the United States in terms of physical size, but has the third lowest population, making it one of the most sparsely populated states of all. 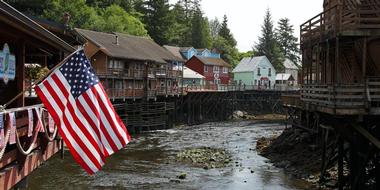 Alaska covers an area of 663,268 square miles and has an estimated population of 739,000 people. Alaska is home to Denali, the highest point in North America, and is well-known for its extremely cold temperatures and snowy conditions. Alaska was originally owned by the Russian Empire but was purchased by the United States in 1867 and officially became a state in 1959. Here are some key statistics and overviews of the largest city in Alaska, Anchorage, and other big cities around the state. 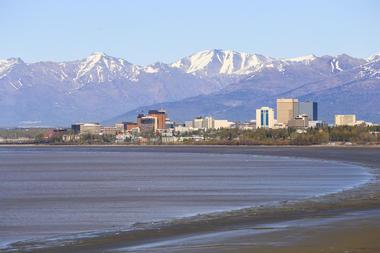 Anchorage, also officially known as the Municipality of Anchorage, is the largest city in the state of Alaska. Anchorage has an estimated population of 298,000 people, with over 400,000 in the surrounding metropolitan area. Given the relatively low overall state population of Alaska, Anchorage is actually home to over 40% of all Alaskans.

When compared to other cities around the United States, only New York City houses a higher percentage of its state population. Anchorage was settled in 1914 and was named due to the anchor-dropping location in Ship Creek. The city covers an area of 1,962.61 square miles and is found in the southern part of the state. 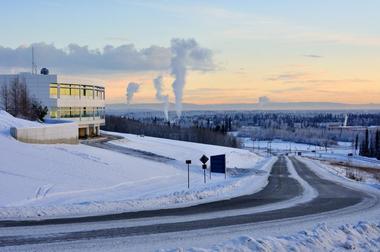 Fairbanks is the second biggest city in Alaska and is also the largest city to be situated in the state's Interior region, away from the coastline. Fairbanks earned the nickname 'The Golden Heart of Alaska' and has an estimated population of 32,000, with more than 100,000 people living in the surrounding metropolitan area. Fairbanks also has the distinction of having the northernmost metropolitan area in the United States.

This city covers an area of 32.53 square miles and is known for housing the University of Alaska Fairbanks and being a key location for various winter sport events, including the Yukon Quest, one of the toughest dog sledding events on the planet. The city is also one of the best places in Alaska to view the northern lights and participate in traditional Alaskan activities like ice carving and cross-country skiing. 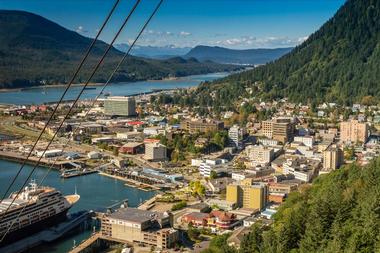 Located on the Gastineau Channel on the Alaskan panhandle, close to the border with Canada, Juneau is the third largest city in Alaska. Juneau is also the state's capital city and covers an area of 3,253.92 square miles. This city has an estimated population of around 32,000 people, and this population can increase and decrease by large amounts throughout the year as many cruise ships stop off in the area.

Juneau was founded in the late 19th century and named after Joe Juneau, a French-Canadian gold miner. Uniquely, Juneau is one of only two American state capitals that has no roads connecting it to the rest of its state or even the rest of North America. This is because Juneau is surrounded by water and difficult terrain, with plane and boat offering the easiest modes of transport in and out of the city. 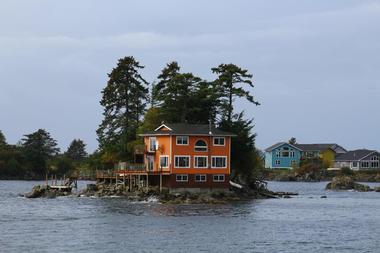 
Once known as New Archangel (Novo-Arkhangelsk) while Alaska was part of the Russian Empire, the city of Sitka is the fourth largest in the state. Sitka covers an area of 4,811.4 square miles, making it technically the biggest city and borough in all of the United States in terms of physical size.

Sitka has an estimated population of around 8,800 people. Nearly 2,000 square miles of Sitka is water, and the city itself is located on Baranof Island, part of the Alaska Panhandle. The city's economy relies on its port, which is responsible for one of the biggest seafood harvests in North America. 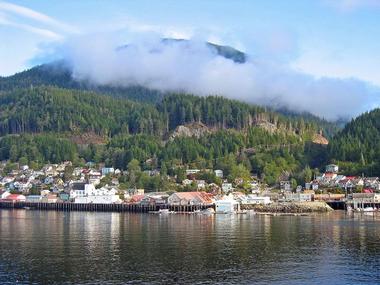 
Located in the Ketchikan Gateway Borough on the Alaskan Panhandle, Ketchikan is the fifth biggest city in the state but has a very small estimated population of just 8,200 people. Ketchikan covers a small area of just 5.9 square miles and is the south-easternmost city in the entire state.

The city was named after the Ketchikan Creek which flows through it. The city's economy is highly dependent on fishing and tourism, and Ketchikan is nicknamed 'Salmon Capital of the World'. The city also possesses the world's biggest collection of totem poles, attracting many tourists each year.

22 Best Free Things to Do in Washington, DC Year Round