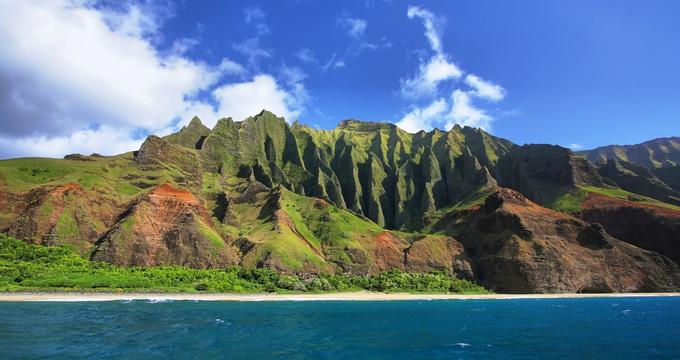 While most tourists stick to Hawaii's fine sandy beaches, hikers and nature lovers head up the spectacular, unique Hawaiian mountains. From the green lush mountains of Kauai to the rugged volcanic ranges of the Big Island, exploring the Hawaiian mountains is a very special treat. Most are of volcanic origin, so it is possible to actually watch a volcano erupting, like on Kilauea. With unique plant ecosystems, lush tropical forests, high precipitation, and great heights, Hawaii’s mountains are challenging to explore, but the views that open up once you are at the summit make you feel on top of the world. 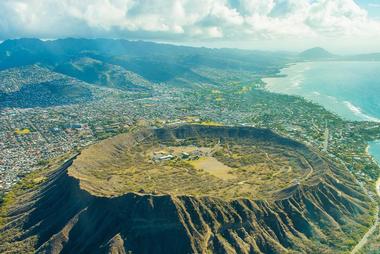 Located close to the eastern coastline of Oahu, Diamond Head is Waikiki’s most recognizable landmark. This 300,000-year-old volcano cone has a famous hiking trail that no tourists coming to Oahu can miss. Diamond Head is part of the Diamond Head State Monument and offers spectacular views of Waikiki and the surrounding ocean. The trail to the summit of Le‘ahi was built as an important part of Oahu’s coastal defense in 1908. While only 0.8 mile from trailhead to the summit, the trail feels much longer as it is steep, slippery, and strenuous. Hikers gain 560 feet in elevation from the volcano’s floor. 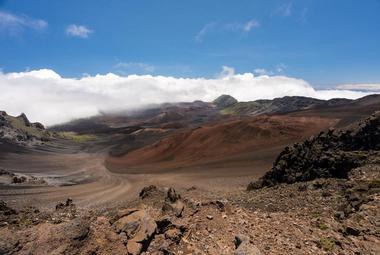 Haleakala is a huge shield volcano on the Island of Maui. The tallest peak of Haleakala or "house of the sun", is Pu?u ?Ula?ula, or Red Hill, at 10,023 feet. There is a massive 7-mile-long, 2-mile-wide, and 2,600-foot-deep depression at the summit, with steep walls. The mountain is mostly bare and forbidding looking and is part of the Haleakala National Park. The sliding Sands Trail and the Halemau?u Trail are the main trails leading into the volcano. The temperature at the summit drops to 40°F, and the air is very thin at the high elevation, making hiking to Haleakala fairly challenging, especially given the fact that the hike goes almost 2,000 feet downhill into the volcano and uphill on the way back. None of that is keeping hikers and tourists away, however, and coming for the sunrise on Haleakala’s summit is very popular. Hualalai is one of the most active volcanoes on the island of Hawaii, one of five shield volcanoes that actually form the island. Its highest peak is 8,271 feet high and about 300,000 years old. Its next eruption is expected within the next century. The mountain, inhabited by natives since before recorded history, was a popular among Hawaiian royals, who built may palaces on its slopes. The volcano ecology is interesting, with a number of rare plant species and nature reserves. The coast is dotted with luxury resorts and golf courses. A huge number of hikers attempt to go up the Hualalai, which is a fairly easy hike, although the land around the summit is privately owned. 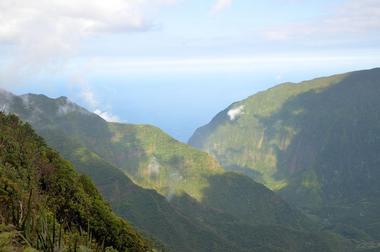 Kamakou is located on the island of Molokai and at 4,961 feet is the highest peak on the island. It is part of the east Molokai extinct shield volcano. Most of the mountain is part of the very high and secluded Kamakou Preserve, a habitat that provides home to many of Hawaii’s rarest and most endangered plant species. The preserve, which is managed and owned by the Nature Conservancy, is open to visitors. There are organized monthly hikes through the preserve along a narrow scenic boardwalk. A guided tour will drive you from Waikolu Lookout about 2¼ miles to the Pepeopae trailhead. This is one of Hawaii’s wettest areas, with more than 170 inches of precipitation per year, so be prepared to get wet and muddy. 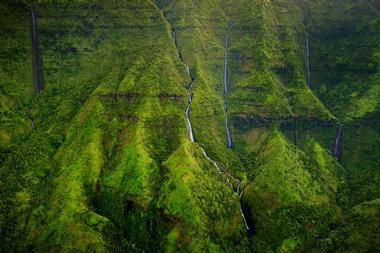 
Kawaikini, elevation 5,243 feet, is considered to be one of the most beautiful and most scenic mountains in the world. The highest summit on the Mount Waialeale volcano on the Island of Kauai, this area is also one of the wettest places on Earth. There is a weather gauge at nearby Lake Waialeale, about a mile from the summit, that has officially recorded more than 900 inches of rain per year. The volcano is long extinct, and over time natural erosion has created many features that are part of its strange, rugged beauty. The summit is often shrouded in mist and clouds. The eastern slopes and soaked soaring cliffs are considered inaccessible for hikers but have been used as a dramatic backdrop in many movies. The only realistic approach for hikers is to go through the Alakai Swamp using the trails of Kokee State Park. 
Kilauea is located on Hawaii’s Big Island and is the most active volcano in the world. Kilauea is a big part of the cycle of life on the island, with its lava creating new land and destroying old land as well as the human homes on its path. Spewing fire and rocks, it is dangerous and fascinating at the same time. On its way to the sea, lava destroys much but leaves some patches of nature intact, creating unique spots for different life forms. Kilauea is part of the Hawai?i Volcanoes National Park and is recognized as a UNESCO World Heritage Site. There is a Kilauea Visitor Center near the park entrance, as well as the Thomas A. Jaggar Museum. The museum's observation deck is great spot for watching the volcano activity at Halemaumau Crater in safety. There is also a number of popular hiking trails and organized ranger-led tours. 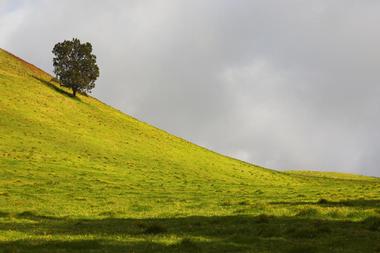 Kohala is the oldest volcano on the Big Island of Hawaii, a magical, mist-shrouded mountain covered in a dense, lush tropical forest, with magnificent waterfalls and deep canyons. To the northeast, there are the steep cliffs of the Waimano and Waipio valleys; to the north and west is Pololu Valley and the rough, inaccessible north shore; and to the east is the off-limits Kohala water district. Around the mountain is the Kohala State Forest Reserve and few other natural area reserves, ensuring that the whole magnificent area will remain pristine and undeveloped. The highest peak, elevation 2,560 feet, is Kaunu o Kaleihoohie, an area of almost constant rain and very difficult to access. It is covered by a lush highland tropical cloud forest full of endemic plants and animals. Kohala Mountain Road is known as a gorgeous scenic road with incomparable views of the mountain.

The Ko'olau Mountains is one of two mountain ranges that form Oahu, clearly visible from most of the island. Ko’olau has elevation of 3,150 feet, but the summit has a long ridge that is over 2,000 feet high, rising dramatically and steeply, straight out of the sea. The mountain is a remnant of a large extinct shield volcano. Although Ko’olau is very close to Hawaii’s major urban centers, it is almost uninhabited and empty of people, with a network of neglected and overgrown trails, which makes these trails and the hike through the unmanaged wilderness attractive to hikers who seek solitude. The trails are surrounded by dense forests, many rare plants, steep cliffs, and breathtaking views. Most of the trails up the mountains and to the ridge line and summits start on the western side of the mountains. 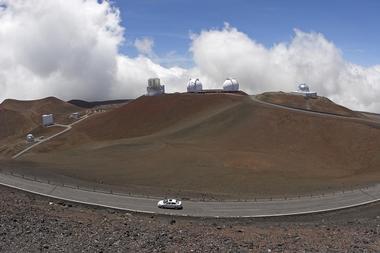 Mauna Kea is a famous dormant volcano on the island of Hawaii with the highest peak at 13,796 feet above sea level and over 33,000 feet from the bottom of the ocean floor, making it the tallest sea mountain in the world. The very high elevation, dry air, and stable airflow make Mauna Kea's summit one of the best places in the world for astronomical observation. There are now 13 telescopes owned by eleven countries at the summit, the largest facility of its kind in the world. The visitor information station has its own telescopes for visitors, while the Onizuka Center holds free nightly stargazing sessions. The mountains are often covered in snow, but even when they are not, it gets very cold. The sunrise and the views from such a high elevation and clear air are absolutely spectacular. Mauna Loa is an active shield volcano and one of five volcanoes that create the island of Hawaii. Mauna Loa is considered the largest volcano on Earth and its last eruption happened in 1984. Its summit is part of the Hawai'i Volcanoes National Park. Mauna Loa’s slopes are fairly gentle and have a number of hiking trails going up to the summit. One of the most popular runs from the Saddle Road up to the Mauna Loa Observatory at 11,135 feet. The Mauna Loa Trail is longer but not too steep or strenuous. There is no much shade along the trail, so it can get hot along the way and cold on top. There are two cabins where hikers can spend the night. With the total round trip of 43.2 miles, count on 3 to 4 days to complete the hike. 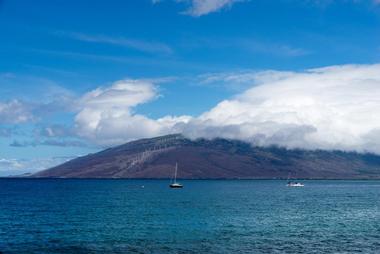 Located on the island of Maui at the elevation of 5,787 feet, Pu?u Kukui is the highest peak of Mauna Kahalawai, an eroded remains of an extinct shield volcano. Below the summit is the Pu?u Kukui Watershed Management Area, a private nature preserve owned and maintained by the Maui Land & Pineapple Company. Pu?u Kukui is considered one of the wettest areas on Earth. In addition, the rainwater cannot drain and ends in a bog because the soil is so deep and dense. This unique environment creates conditions for a large number of endemic plants, birds, and insects. Many of the trees here are dwarfs. The area is closed to hikers and entrance is restricted to conservationists and researchers.