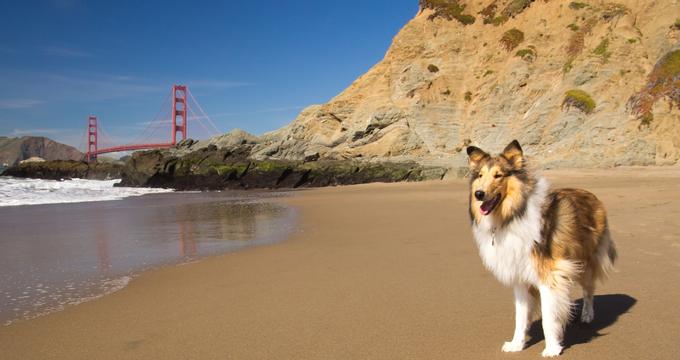 The greater San Francisco Bay region spans a surface water area of 1,600 square miles and is the fifth-largest metropolitan region in the area, home to the major cities of San Francisco, San Jose, and Oakland. The beautiful bay has been designated as a Ramsar Wetland of International Importance and offers stunning coastal beach areas and dramatic views of world-famous landmarks such as the Golden Gate Bridge. A vast number of public beach areas are offered throughout the region, including many under the supervision of the Golden Gate National Recreation Area, one of the United States’ largest urban parks. For area visitors looking for a day out with their dogs, these 13 beaches offer dog-friendly shoreline areas, including off-leash areas and pet-owner swimming permissions. 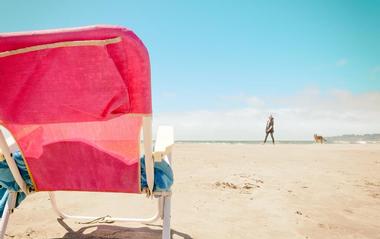 Stinson Beach is known as one of the most pristine beaches in the San Francisco region, serving as a popular day trip spot for locals and tourists alike. It is noted as one of the region’s top swimming beaches and offers opportunities for fishing, surfing, hiking, and beach volleyball. As the beach is under joint supervision by the National Park Service and Marin County, dog owners should note that only the county-owned section, known as Upton Beach, allows dogs on leashes. Nearby Seadrift and Bolinas Beaches also allow on-leash and off-leash exploration areas, and several area restaurants permit dogs, including Smiley’s Schooner Sallon and the Parkside Cafe. 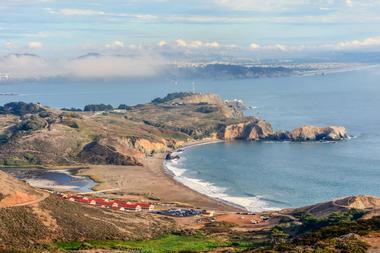 Rodeo Beach is located less than three miles from the Golden Gate Bridge, offering beautiful scenic views from within a cliff-sheltered lagoon area. The beach is a popular site for surfing, sunbathing, and kite flying and offers several picnic areas with public restroom and shower facilities. Its unique sands feature jasper, jade, black agate, and carnelian deposits, though collecting is strictly prohibited. With the exception of several restricted wildlife rehabilitation areas, dogs are permitted off-leash under voice control. Nearby, Forts Barry and Cronkhite are maintained as historic sites under the care of the National Park Service. Visitors should note that swimming is not advised due to strong currents and potential risk for shark attacks. 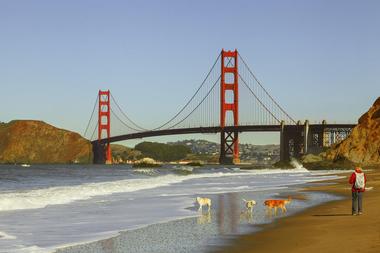 Baker Beach is part of the Golden Gate National Recreation Area, which preserves more than 82,000 acres of shoreline terrain around the San Francisco Bay. It is located approximately one and a half miles from the Golden Gate Bridge, offering spectacular views and photography angles, and allows dogs to roam off-leash with voice control on its northern portion above Lobos Creek. The beach also serves as a popular fishing spot and is home to the historic Battery Chamberlain, the last 6-inch disappearing gun preserved on the West Coast. Visitors should note that portions of the beach are clothing-optional and that nude sunbathing is popular during the summer months. 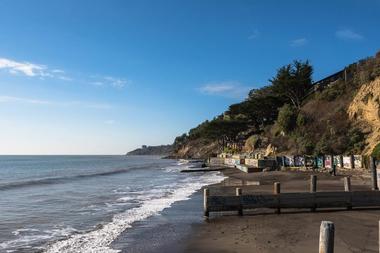 Bolinas Beach is a secluded dog-friendly beach located off of Highway 1 in the city of Bolinas, also known as Brighton Beach due to the name of its access road. The beach allows off-leash roaming for four-legged friends at all times, though pet waste removal is strictly enforced due to neighborhood complaints. It is known as a popular beginner surfing spot due to its soft rolling waves, which wrap around the point of nearby Bolinas Lagoon. Camping is permitted at all times, and a tennis court is available nearby for use. Other popular activities include fishing, kayaking, bird watching, and sunbathing. 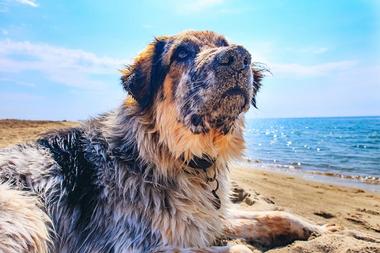 
Buchanan Dog Beach, also known as Albany Beach, is located at the entrance to Albany Bulb and is a simple, undeveloped beachfront offering gentle waves and a less crowded atmosphere than its nearby peninsula. The area is noted for its unusual history as the site of former construction dumping and offers views of the nearby Golden Gate and Bay Bridges and the Golden Gate Fields racetrack. Though visitors should note that the beachfront is heavily populated with rocks and driftwood, it offers a convenient access point for off-leash exploration and swimming with dogs. The beach is also a great spot for watching nearby kite surfers in the bay’s waters. 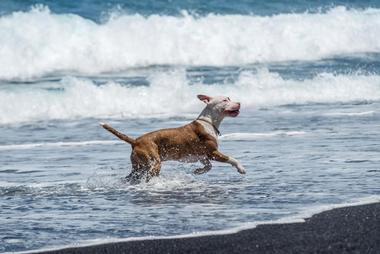 
Esplanade Beach is located in Pacifica, less than a 20-minute drive from San Francisco, and is accessible from Esplanade Avenue near the Land’s End apartment complex. As the city’s only official dog-friendly beach, the beach allows off-leash roaming at its north end and leashed exploration elsewhere. The mostly-enclosed beach provides a safe, restricted environment for dogs to roam with owner comfort. Breathtaking ocean views are offered from its shoreline, with opportunities for whale watching during peak conditions. Visitors should note that the beach’s waters are not safe for swimming due to strong undertows and that temperatures can drop drastically during the evenings and winter months. 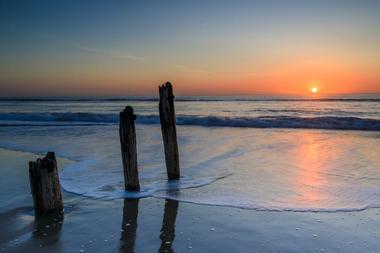 Fort Funston Doggie Beach is located along San Francisco’s southwestern coast and is one of the United States’ premiere spots for hang-gliding. The beach is part of the Golden Gate National Recreation Area and showcases spectacular 200-foot sand bluffs. Dogs are permitted off-leash within most areas of the beach and its surrounding areas and are allowed on-leash throughout the rest of the recreation area, making the beach the perfect spot for a pet and owner day excursion. A variety of nature trails connect the beach to sites such as the nearby World War II-era Battery Davis and the beautiful Mussel Rock Beach. Other popular activities include shelling, fossil collection, and horseback riding. 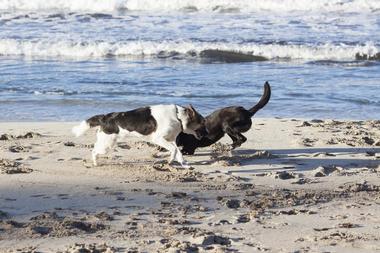 Lands End Beach Off Leash Dog Area is an unfenced beach area within a northwestern shoreline region along the San Francisco Bay, featuring wildflower-covered hillsides and rocky coastal areas. The area is serviced by the Lookout Visitor Center, which offers exhibits on regional history and sells a variety of souvenirs. A number of historic attractions are easily accessible from the beach, including the ruins of Sutro Baths, the West Fort Miley batteries, and the USS San Francisco World War II memorial. A variety of nature and historic trails also embark from the beach, including the wheelchair-accessible El Camino Del Mar Trail. Dogs are permitted off-leash in most areas of the beach, with leash restrictions enforced by sign in certain sections.

9.Beaches that allow dogs near me: Montara State Beach

Montara State Beach is located at the foot of Montara Mountain, which is part of the Santa Cruz mountain range and is home to the region’s only undeveloped coastal mountain habitat. Owner-supervised dogs are permitted within the beach on leashes with lengths of no more than six feet. The beach serves as a popular spot for surf fishing and tide pool exploration, though collecting of shells and other items is strictly prohibited. Though camping is not permitted on the beach, the nearby lighthouse on Point Montara offers overnight accommodations in a historic restored facility, and several state park campgrounds are also within close range. Visitors should note that beach fires, fireworks, and drones are also prohibited within beach limits.

-- "12 Dog-Friendly Beaches in the San Francisco Bay Area for Locals & Tourists - Restaurants, Hotels" Back to Top 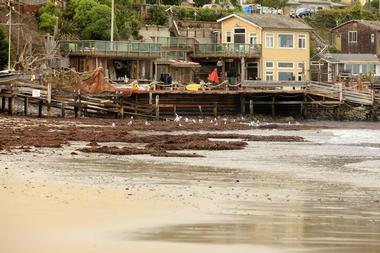 Pacifica State Beach is managed by the city of Pacifica and is also known as Linda Mar Beach, spanning a wide stretch of cove backed by a range of sand dunes on its northern end. The beach has been recognized as one of the top restored beachfronts in America, showcasing extensive beach habitat restoration measures and newly-expanded visitor trails and amenities. More than one million people visit the beach every year, which has become one of the most popular beginner surfing spots in San Francisco Bay. Dogs are permitted on leash throughout the beach, though pet owners should note that the state park contains habitat areas for the threatened western snowy plover shorebird. A paved multi-use trail is available for walking and biking, and a number of tide pool areas serve as popular exploration sites during low tide. 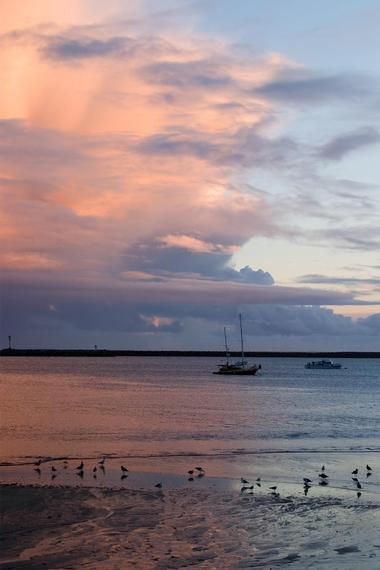 Pillar Point Harbor is riprap jetty boat harbor in San Mateo County, located near Half Moon Bay. The harbor was the historic home of the Ohlone indigenous tribe and was the site of a number of notable Russian fur trapper shipwrecks throughout the 19th century. Today, the harbor serves as a popular resort and pleasure crafting spot, showcasing a variety of hotels and restaurants. Dogs are permitted off leash along the enclosed sea wall harbor and within its waters for supervised swimming. The Pillar Point Marsh Trail extends a mile off the harbor’s shoreline, offering chances to explore coastal flora and salt marsh regions, and the world-famous Mavericks surf point features waves that swell as high as 60 feet.

12.Beaches that allow dogs near me: Albany Bulb

Albany Bulb is located behind the Golden Gate Fields racetrack and was created by decades of construction debris dumping in the San Francisco Bay. Over time, the debris created a landfill peninsula that became populated with underbrush and vegetation such as acacias, palm, fennel, and Himalayan blackberries. Today, the bulb serves as a popular spot for guerilla art, featuring notable works produced by area artists such as Osha Neumann and arts collective Sniff. Dogs are permitted on the bulb, though visitors are advised to keep leashes handy, as one area of the bulb is restricted as a burrowing owl habitat and several shoreline areas may be hazardous.

22 Best Things to Do in Murphys, California

25 Best Things to Do in Oakland, California

25 Best Things to Do in Santa Monica, California