14 Best Things to Do in Chinle, Arizona 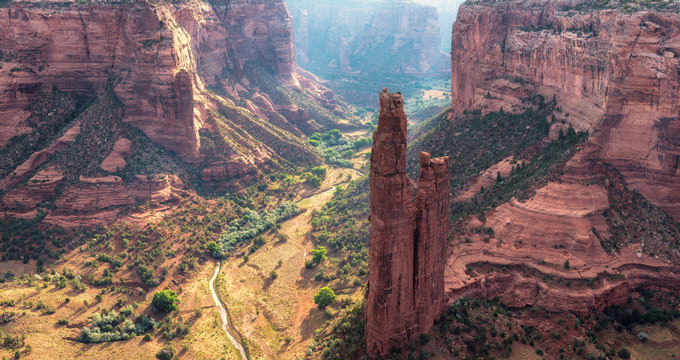 Chinle, AZ is best known as the gateway to Canyon de Chelly National Monument, an 84,000-acre site that preserves large collections of significant Ancestral Pueblo, Hopi, and Navajo ruins. Navajo Nation tour guides offer a variety of guided tours of the area’s natural and historical attractions, including the ruins of the area’s canyons, the Navajo National Zoological and Botanical Park, and Window Rock Monument. 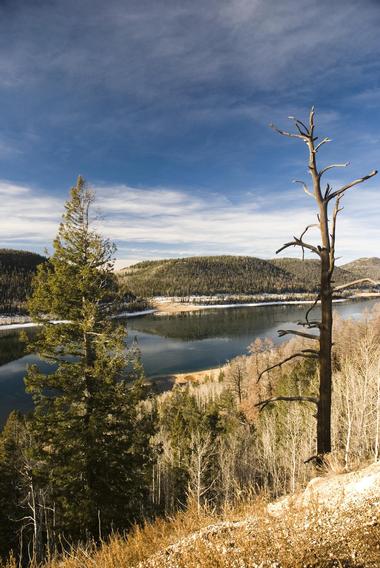 North Rim Drive is accessible via Route 7 near the monument’s Visitor Center, providing access to three of the monument’s most significant archaeological sites. The drive spans 34 miles round-trip and provides access to sites such as the Antelope House Overlook, which allows visitors to observe the Antelope House Ruin, a site excavated in the 1970s that showcases a circular plaza and illustrations by Navajo artist Dibe Yazhi. One of the region’s largest Ancestral Pueblo villages is visible from the Mummy Cave Overlook, while the site of the 1805 Navajo massacre by pioneer forces may be viewed from the Massacre Cave Overlook.

-- You are reading "14 Best Things to Do in Chinle, Arizona" Back to Top 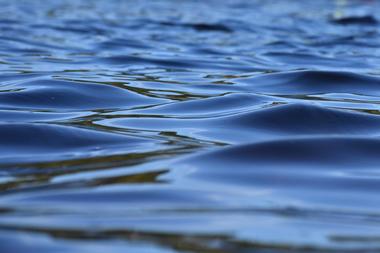 Wheatfields Lake is located near the town of Tsaile, adjacent to the eastern side of Canyon de Chelly National Monument, and is one of the Navajo Nation region’s most popular outdoor recreation spots. The Apache County lake is managed as a significant coldwater fishery, offering opportunities to fish for cutthroat, brown, and rainbow trout. Fishing spots are offered along the lake’s access road, with boat launch opportunities available along the opposite side of the lake from the road. Picnicking is also a popular day-use activity, and several campsites are offered nearby, including the Wheatfields Lake Campground located between mile markers 64 and 65 along Indian Route 12.

-- You are reading "14 Best Things to Do in Chinle, Arizona" Back to Top 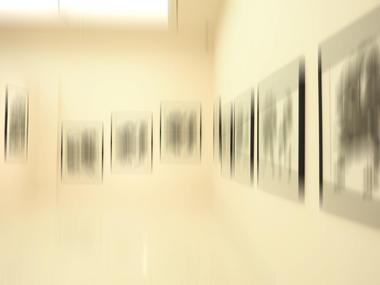 Hatathli Museum is located on the grounds of Diné College in Tsaile and is named in honor of the college’s founder, Ned A. Hatathli. It is dedicated to the preservation of indigenous American culture and history, showcasing a large permanent museum collection of more than 3,000 significant artifacts related to the region’s tribes, including pottery, textiles, paintings, photographs, and civic documents. Approximately 40% of the museum’s collections can be viewed within audiovisually-focused exhibits, which focus on topics related to area tribes and their interaction with one another and with European pioneers. Public special events offered throughout the year include a Native American Music Festival and Art Market and an annual holiday bazaar. 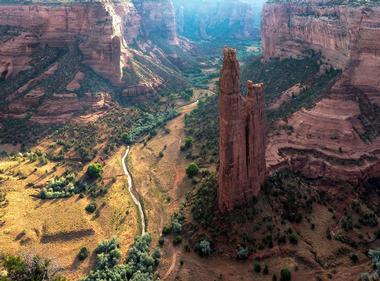 Spider Rock is one of the Chinle region’s most famous landmarks, rising more than 830 feet above the floor of Canyon de Chelly National Monument. The red stone spire takes its name from the Navajo legend of the Na'ashje'ii Asdzaa spider woman, a figure of the tribe’s Third World legend who spun a silken web from the top of the structure and snatched up naughty children trespassing near her territory. In some variations of the legend, the spider woman is the figure who taught the Navajo people the art of weaving. Today, the formation is one of the region’s most-photographed sites, appearing in a large number of commercials and advertising campaigns.

-- You are reading "Fun Things to Do in Chinle, Arizona this Weekend with Friends" Back to Top 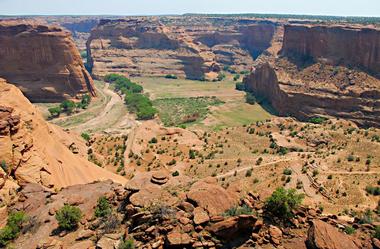 
Canyon de Chelly National Monument is one of America’s most-visited national monuments, spanning more than 84,000 acres throughout Navajo Nation lands near the town of Chinle. The region’s brilliantly colorful cliff walls were carved millions of years ago by streams when the region’s sea level was significantly higher, with rock formations pushed upward by land uplifts. The area has a rich indigenous history, used historically by Ancient Pueblo, Hopi, and Navajo peoples, and commemorates significant archaeological ruins of the tribes today, along with sites related to the 1805 invasion of the canyon by pioneer forces that led to the Long Walk of the Navajo. In 1931, the region was preserved as a national monument, and today, it is accessible to visitors along two loop drives that provide automobile access to a number of tourist sites.

-- You are reading "What to Do in Chinle, Arizona this Weekend" Back to Top 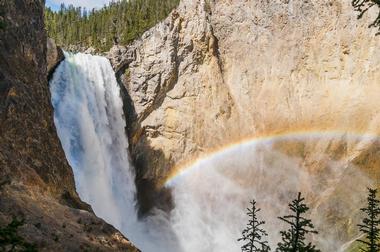 
South Rim Drive is one of Canyon de Chelly National Monument’s main visitor vehicle access routes, accessible via Route 7 near the monument’s Visitor Center. Seven visitor overlooks are provided along the route, including an overlook showcasing the park’s most famous geologic attraction, Spider Rock, which rises 750 feet above the canyon floor and has been showcased in numerous commercials and advertising campaigns. Other significant sites along the route include the Tsegi Overlook, which showcases the remains of ancient Navajo farmlands, and Junction Overlook, which provides views of the confluence of the canyon with nearby Canyon del Muerto. The White House Overlook also provides hiking access to the White House Trail, the only portion of the canyon that may be explored on foot without a permit or tour guide.

-- You are reading "Top Romantic Tourist Attractions in Chinle, Arizona" Back to Top 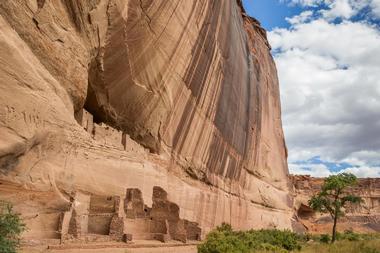 White House Ruins Trail offers the monument’s only opportunity to explore attractions on foot without a tour guide or permit, spanning 2.5 miles round-trip from the White House Overlook to the White House Ruins, named for the white plaster walls of the Ancestral Pueblo dwellings that decorate the region. The cliff dwellings were constructed between 350 and 1300 CE, when the Pueblo left the region due to climate change and pressure from other indigenous groups. Hikers descend 600 feet to the canyon’s floor to view the ruins, passing stretches of pinon-juniper woodland and offering dramatic views of the surrounding sandstone formations. Several points along the trail hike through tunnels within the sandstone, and a footbridge crosses the waters of Chinle Wash at the canyon’s base.

-- You are reading "What is There to Do with Kids in Chinle, Arizona" Back to Top 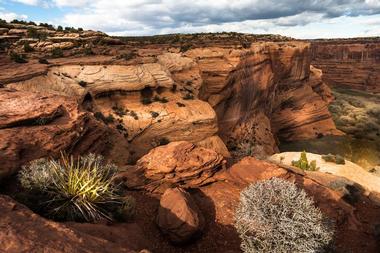 Canyon del Muerto is located adjacent to Canyon de Chelly National Monument and preserves a significant burial ground for prehistoric indigenous people, including the Ancestral Pueblo, Hopi, and Navajo tribes. The canyon’s name is Spanish for canyon of the dead and showcases a number of significant archaeological sites and artifacts within its walls and structures. A variety of ancient carvings, etchings, and paintings decorate the walls of the canyons, with several significant areas of cliff dwellings preserved. Together with Canyon de Chelly and Monument Canyon, the region spans more than 130 square miles of historical sites. 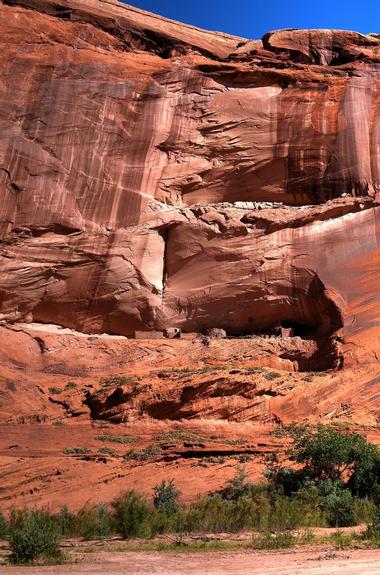 Antelope House Ruin preserves a set of Ancestral Pueblo ruins that dates between 1050 and 1270 AD, created before the tribe left the region due to climate change and pressure from other local indigenous groups. The ruins center around a communal plaza surrounded by two main sections of buildings, which are believed to have originally consisted of more than 91 rooms in total and reached a height of more than four stories. Today, the remaining walls of the structures preserve a variety of ancient carvings, paintings, and etchings, along with illustrations created by modern Navajo artist Dibe Yazhi. The ruins derive their name from a set of paintings of antelopes grazing on the cliffs of the canyon. Several caves within the area may also be explored by visitors.

-- "Best Things to Do in Chinle, Arizona for Locals & Tourists - Restaurants, Hotels" Back to Top 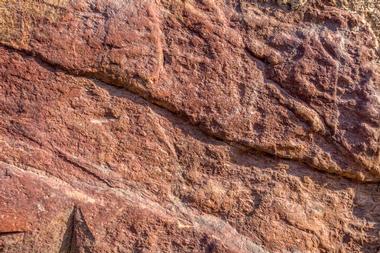 Sliding Rock Ruin preserves an Ancestral Pueblo village constructed along the walls of Canyon de Chelly between 1050 and 1300 A.D. before the tribe left the region. Since then, additional ruins have been added to the site by other tribes that have used the area for agricultural dwelling, including the modern-day Navajo Nation. Tours of the Sliding Rock Ruin are offered by Navajo Nation tour guides, who elaborate on the region’s civic and archaeological history. The Sliding Rock Overlook, accessible via the national monument’s South Rim Drive, also provides spectacular lookout views of the canyon’s brilliantly-colored sandstone formations and cliff carvings. 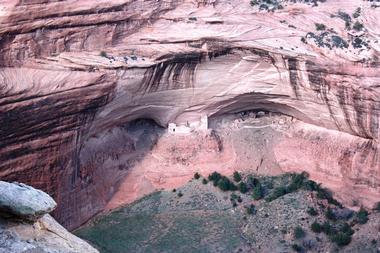 Mummy Cave is a significant archaeological site located within Canyon de Chelly National Monument, accessible via its North Rim Drive. The cave preserves the remains of an indigenous settlement inhabited by several cultures between 300 and 1300 A.D., including Ancestral Puebloan and Basketmaker civilizations. It derives its name from two mummified bodies found in the cave during explorations in the late 19th century, which were preserved in yucca. The cave’s tower top is constructed from timbers cut and placed around 1284 A.D., which have been stabilized in recent years to preserve their fragile state. Several Navajo Nation touring companies provide access to the Mummy Cave site via guided hiking tours, which elaborate on the region’s cultural significance.

-- "New cool stuff to do in Chinle, Arizona" Back to Top or Romantic Getaways 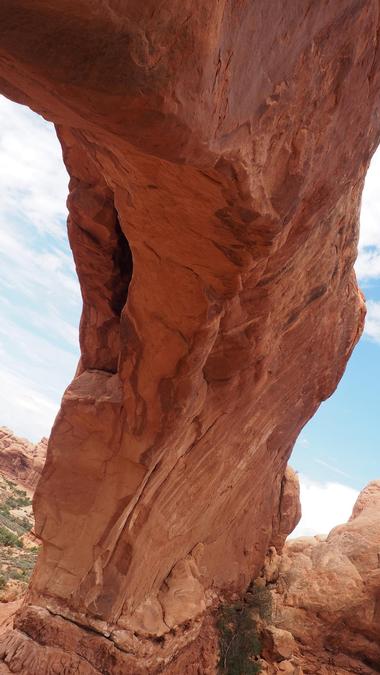 Hope Arch is a significant rock arch formation located west of the town of Chinle near mile marker 446 of Highway 191. Approximately eight miles from the intersection at Chinle Hospital, the salmon-colored fins of the arch are visible to visitors, spanning a distance of 65 feet and a vertical opening of more than 70 feet. The arch has been described as one of the American Southwest’s most beautiful natural rock arches, offering a picturesque opening in its smooth rock surface for pristine skies and bountiful sunlight to shine through. A parking lot is offered for visitors to explore the site, though visitors should exercise care not to disturb natural surroundings in traveling through Navajo Nation lands. 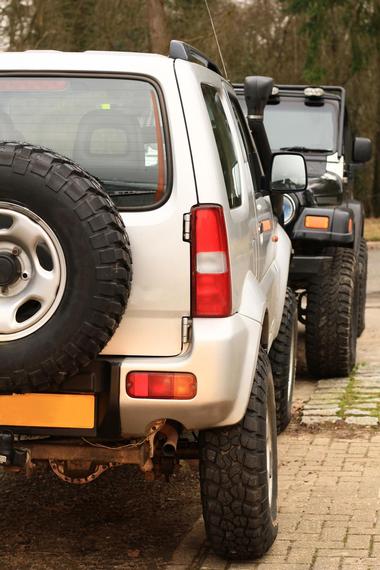 Canyon de Chelly Beauty Way Tours is a Navajo Nation owned and operated tour guide company that has been offering guided hiking and Jeep tours of the Canyon de Chelly region for more than 60 years. The family-owned company was founded by Chauncey Neboiya, the first Navajo archaeologist in the region, and is committed to providing visitors with safe, meaningful interaction with the land and culture of the Navajo people throughout Arizona. Tour options include three-hour Jeep tours and full-day excursions, along with overnight camping trips lasting up to three days that explore more remote sites within the canyon. Special workshops and events are also offered periodically, along with custom tours for small groups and organizations. Phone: (928) 781-2113 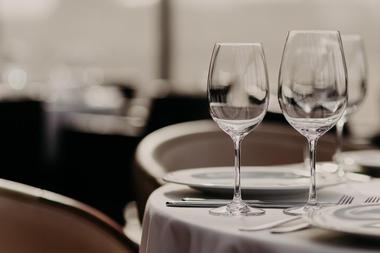 Thunderbird Lodge Cafeteria is located at the site of a historic Navajo trading post that was constructed in 1896. Today, the trading post still offers a chance to purchase some of the region’s most exquisite indigenous arts and crafts items, including Navajo rugs, jewelry, and clothing. Several documentary videos are also available for purchase, including the National Parks Service-affiliated Canyon de Chelly: American History, Heritage, and Tradition. The lodge’s cafeteria provides all-day restaurant service for area tourists, serving a variety of continental dishes, including traditional Native American entrees. Beautiful Navajo rugs adorn the walls of its dining room, which is located within a vault that once served as the trading post’s jail facility.


Free points of interest close to me: Woodstock, Romantic Weekend Getaways in Utah

14 Best Things to Do in Chinle, Arizona

You are reading "14 Best Things to Do in Chinle, Arizona " Back to Top

20 Best Things to Do in Peoria, Arizona

25 Best Things to Do in Mesa, Arizona

25 Best Things to Do in Tucson, AZ

25 Best Things to Do in Scottsdale, Arizona