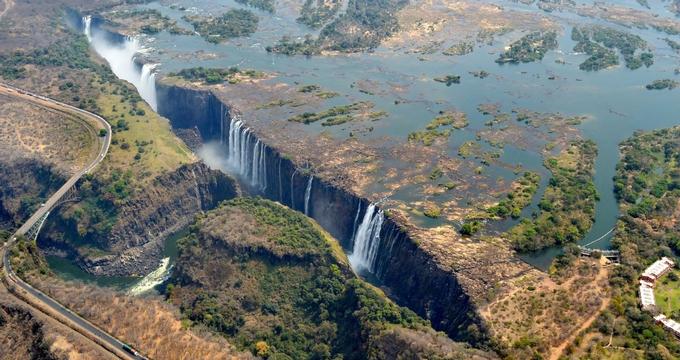 Victoria falls is the midway point of the Zambezi River which makes it possible to see it's grandeur from both Zambia and Zimbabwe, Africa. Victoria Falls is commonly known as the greatest waterfall in the world with the capability of plummeting five hundred million gallons of water per second over the basalt cliff edge.

Victoria Falls is known as one of the seven greatest natural wonders of the world due to being the largest sheet of falling water in the world. The enormous waterfall spans 1688 meters wide (the entire width of the river) and plummets 108 meters over a basalt cliff to continue the Zambezi River below.

The waterfall is thought to be created over one million years ago when earth movement caused the upper Zambezi river to divert to the east. The bed of basalt the river was diverted over is 305 meters thick. The cracks in basalt are formed from cooled molten lava

Also called, "Mosi oa-Tunya" or, "The Smoke that Thunders" by the indigenous people of the region, the sprays of water that shoot upwards from the falls can be seen and heard from miles away. Victoria Falls is the greatest natural wonder in Africa and was officially discovered by nonnatives in 1855 when Dr. David Livingstone was brought to the site by Makalolo peoples via canoe. Dr. Livingston named the falls after Queen Victoria of England.

Victoria Falls is officially separated into five distinct falls. The Zimbabwe side of the river contains four of waterfalls (The Devil's Cataract, Main Falls, Rainbow Falls, and Horseshoe Falls) while Zambia has the fifth (Eastern Cataract).

The Devil's Cataract- This waterfall is 70 meters tall and was named by missionaries to the area who encountered indigenous tribes on the island in the river across from the waterfall. The tribes were described as devilish as they were engaging in sacrificial rites.

Main Falls- The larges of the five falls, Main Falls is 93 meters high with a peak volume of 700,000 cubic meters of water per minutes flowing over its edge. Before hitting the river below, the water from this fall is turned into mist by the rising winds.

Horseshoe Falls- These waterfalls dry up typically in October and November and are shaped as their name suggests. The lowest volume of water passes through these falls that are 95 meters tall.

Rainbow Falls- The Tallest of the five falls, Rainbow Falls are 108 meters tall and a rainbow is featured above the scenic waterfalls on nearly every bright day. On nights where there is a full moon, a lunar rainbow is visible above the falls.

The Eastern Cataract- This waterfall is the only waterfall of Victoria Falls located on the Zambia side and is the second tallest at 101 meters.

While Victoria Falls are the main attraction there are several ways to enjoy the waterfalls.

Devil's Pools-There are drier months of the year when some the grand waterfall dries up and the Zambezi River get substantially lower. From mid-August through January visitors to Victoria Falls are able to walk right up to the lip of the falls and water the water plummet over the side 100 meters below on the Zambian side of the waterfall. This is possible through Rock Pools that create natural infinity pools. The pools are reached by taking a walk over rocky terrain and then swimming down the river. Guides are present to ensure no visitors go over the edge of the falls. Swimming in the river during any other time of year is unauthorized and can result in death.

Victoria Falls Bridge- This bridge is a popular spot for bungee jumping and rope swings. Located below Victoria falls across the Zambezi River, the bridge was built over the second gorge and links Zambia and Zimbabwe. The bridge was completed in 1905 and was designed by George Andrew Hobson. The bridge was opened officially by the son of Charles Darwin on September 12th, 1905 and is listed as a Historic Civil Engineering Landmark. The bridge is made from steel and is 198 meters long and 128 meters above the water line.

There are many different options for accommodations on both sides of the Zambezi River. Several hotels, resorts, and lodges are located very near to the waterfalls with views of the river and falls from the properties. Campsites and hostels are also available for backpackers and visitors looking for the most budget friendly options.

Netherlands Things to Do: Keukenhof

20 Best Things to Do in Venezuela

25 Best Things to Do in Madagascar