10 Best Things to Do in Harpers Ferry, WV 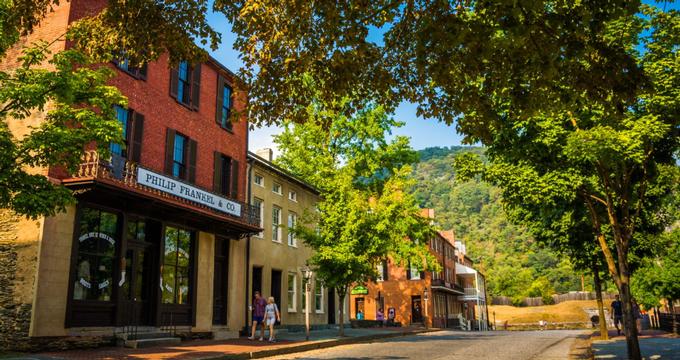 The small town of Harpers Ferry, WV has a population of only a few hundred people, but it still packs a major punch of history and natural beauty. The town is located at the confluence of two major rivers: the Shenandoah and the Potomac Rivers, which are also the state borders, meaning that right across those banks are the states of Maryland and Virginia. Harpers Ferry is named for the 18th century ferry, run by Robert Harper, which carried passengers and cargo across the river, and is part of Harpers Ferry National Historical Park. Today, Harpers Ferry is home to some historic buildings, monuments, landmarks, and a charming little downtown district, and it makes for a great day trip or weekend destination. 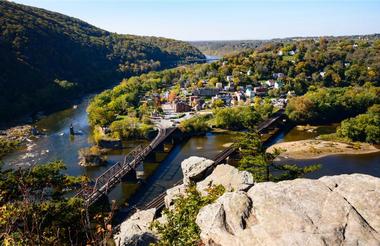 Harpers Ferry National Historical Park isn’t just part of West Virginia. It encompasses the entire confluence of the Shenandoah and Potomac Rivers, and the land that is included in the park’s domain falls into West Virginia, Virginia, and Maryland. In fact, the entire town of Harpers Ferry is technically part of the park. It was first established as a national park in 1944, but since long before that it has been considered one of the most beautiful parts of the United States. The Appalachian Trail runs right through it, but there are also over 20 miles of other hiking trails in the park, which lead to scenic overlooks or the historic sites of Civil War skirmishes. 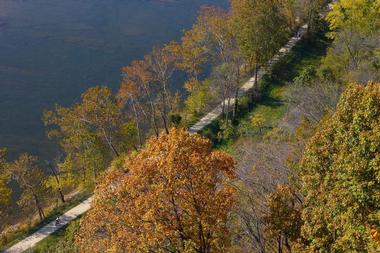 The Appalachian Trail Conservancy works hard to protect, preserve, and manage the land of and surrounding the famous Appalachian Trail, so that its incredible beauty can be enjoyed by hikers and visitors for generations to come. The ATC was founded in 1925, and since then has worked tirelessly through groups of dedicated volunteers and staff to maintain and care for the 2,190 miles of trail from Maine to Georgia. The ATC’s headquarters is located in Harpers Ferry, which is also roughly the midpoint of the entire trail, so hikers love to get their photo taken in front of the visitor’s center as a milestone of their journey, and visitors can see these photos in the ATC’s thru-hiker album. 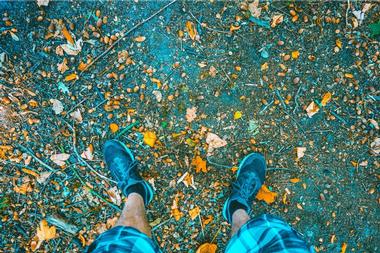 At The Point, located at the very tip of land on the shores of the Potomac River where it meets the Shenandoah River, visitors can stand with their feet firmly in the West Virginia soil and look out over the historic waters to see Maryland and Virginia across the way, framed by the gorgeous Blue Ridge Mountains. The Point is beautiful at any time of year, and makes for an incredibly scenic photo opportunity, whether you’re snapping a picture for Instagram or with a professional-grade camera. The point is easily accessible by foot from downtown Harpers Ferry. Located along the famous Appalachian Trail, Jefferson Rock is a unique rock formation, made up of a long, broad piece of shale rock on top of four stone pillars, which were placed to replace the original rock formation as it eroded through the ages. Jefferson Rock gets its name from one of America’s founding fathers, Thomas Jefferson, who stood upon this very rock in 1783, and remarked upon its beauty in his notes about Virginia. A hike to Jefferson Rock affords a gorgeous view of the Blue Ridge Mountains, the Shenandoah River, and the surrounding area. 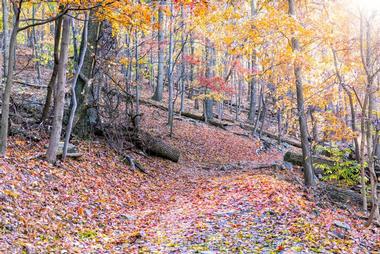 
The Appalachian Trail is one of the longest and most well-known hiking trails in the United States. According the the Appalachian Trail Conservancy, it is the longest hiking-only trail in the entire world. Clocking in at over two thousand miles long, it stretches from Maine all the way down to Georgia, passing through 14 states along the way, and Harpers Ferry is roughly its midpoint, making it a celebrated milestone for many thru-hikers. While a full hike along the Appalachian Trail can take months, visitors to Harpers Ferry can enjoy a short hike along a section of the trail for a glimpse of some of the amazing beauty of the region. 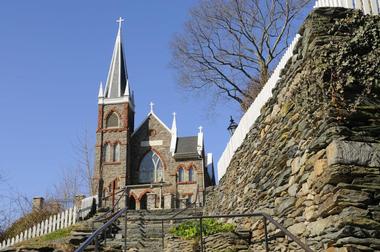 
Built in 1833, St. peter’s Roman Catholic Church in Harpers Ferry is one of the most beautiful churches in the region, largely in part due to its location. Located high above the town, the church boasts an incredible sweeping view of the surrounding area, including the gorge of the Shenandoah and its confluence with the Potomac. Throughout history, St. Peter’s Roman Catholic Church has been altered to change its architectural style, and was the only church in Harpers Ferry to survive the Civil War. Visitors to the area can attend a weekly mass on Sundays at 11am if they wish, or visit the church another time to catch some incredible history and gorgeous views. Harpers Ferry was still a part of the state of Virginia when John Brown’s Fort was built in 1848. Back then, it was used to house a fire engine and as a guard-house by the Harpers Ferry Armory. It gets its current name, and the notoriety that comes with it, from a raid led by John Brown in 1859, when Brown and a group of abolitionists took the armory by force and held 60 people hostage. They intended to take the weapons stored there and distribute them to abolitionists, but were soon stormed by a group of marines which included Robert E. Lee. Although their raid failed, John Brown’s Fort, as it came to be known, later became a tourist hotspot and practically a shrine for African Americans in the late 1800s. The building was dismantled and brought to Chicago for the World’s Fair in 1893, and eventually returned to Harpers Ferry in 1895. 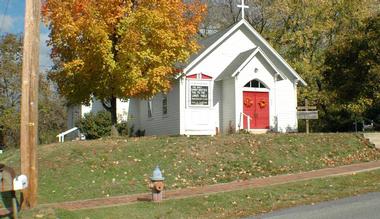 St. Peter’s Roman Catholic Church was the only surviving church to escape the devastation and destruction of the Civil War, but one of the other historic churches in Harpers Ferry was St. John’s Episcopal Church. During the war, it was used as a hospital and barracks, but was significantly damaged during that time. After the war ended, it was rebuilt, but abandoned when townspeople built a new church—the current St. John’s Episcopal Church—in town. Today, visitors can check out the newer church, which is still in operation, or visit the ruins of the old one, which still stand and are accessible by trails. Heyward Shepherd was a free black man, and he was also the first person to be killed in John Brown’s raid during 1859. This monument to him was erected in 1931 with a lot of controversy, by several groups of people who wished to illustrate that not all black people were rebellious or anti-slavery, even though there is no evidence to suggest that Shepherd was ever a slave or even that he opposed John Brown’s abolitionist raid. The United Daughters of the Confederacy presented Shepherd as a “happy slave,” and put up this monument as a direct rebuttal to the shrine-like status of John Brown’s Fort for African Americans. Today, the monument stands as a testament to the opposing narratives of the Civil War, as told by Southern whites and African Americans respectively. Kelley Farm Kitchen is a relatively new addition to the area; it opened in late 2018 and brings a new and exciting vegan venue to the table as its offering. Kelley Farm Kitchen is technically located in Bolivar, but it’s only a few miles from Harpers Ferry and is worth a visit for vegans, vegetarians, and omnivores alike. The small dining room doesn’t seat many guests, but those who manage to snag a seat will be treated to an intimate, cozy experience. Kelley Farm Kitchen boasts an all-day breakfast menu as well as a healthy smattering of apps, wraps, and other entrees, and their expertly prepared vegan dishes are often so close to the real thing that customers can’t even tell the difference.

10 Best Things to Do in Harpers Ferry, WV

10 Best Things to do in Beckley, WV