Things to Do in Leavenworth, Washington: Leavenworth Nutcracker Museum 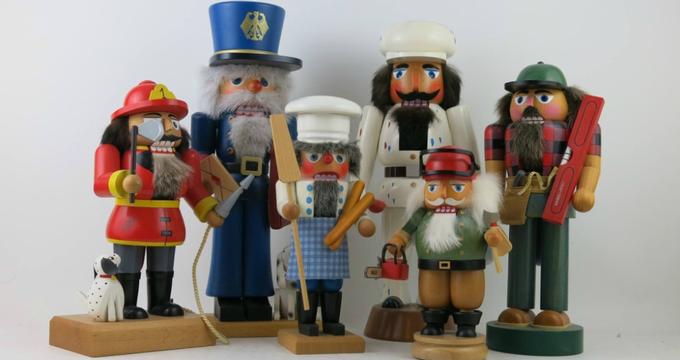 The Nutcracker Museum in Bavarian Leavenworth, Washington offers visitors a view of over 6,000 nutcrackers, some of which date back to ancient Roman times. The museum’s mission is to foster an interest in the history and role of the nut in the human diet, as well as the elaborately crafted tools that have been used throughout history to crack the nuts’ hard shell.

Nutcrackers in the collection range from strictly utilitarian, to the intricately carved figural wooden nutcrackers that are popular with many collectors. Items in the collection include hand held metal nutcrackers, some of which have been hand forged. British cast brass lever nutcrackers from the 18th and 19th centuries, and cast iron nutcrackers from the United States in the shapes of figures are also found in the collection. The museum has many examples of rare, wooden carved nutcrackers. These figural nutcrackers were often discarded when overuse caused the wood to crack. The museum is home to many used versions, as well as collectors items that have never been used to crack nuts. In addition to the nutcrackers, a collection of nutting stones includes specimens that date back to 8,000 years ago. A bronze Roman piece unearthed in the 1960’s is the oldest known nutcracker in the world, possibly dating back to 200 B.C. Additional items on display include nut bowls and nut picks. Over 50 countries are represented by the nutcrackers and tools at the museum, including Brazil, Ethiopia, Argentina, Tanzania, Afghanistan and Australia.

Characters represented by the figural nutcrackers at the museum range from wildlife, to Disney and Sesame Street characters, to familiar storybook characters such as Little Red Riding Hood, the cast of the Wizard of Oz and King Arthur’s Court. Other nutcrackers represent countries, U.S. Presidents, astronauts and soldiers. Karl is a 6-foot tall Bavarian nutcracker that greets guests outside the museum. The piece was carved from a single block of wood by the artist Karl Rappl and offers a popular photo opportunity. Children are welcomed and encouraged at the museum, although due to concerns about allergies, they can only test out the nutcrackers on Nutcracker Day, which takes place each July.

History: George and Arlene Wagner founded the museum in 1995 by donating the building, which was home to their large personal collection. The non-profit organization has since expanded to include several donations from additional collectors. Arlene, otherwise known as the Nutcracker Lady, was a ballet dancer and instructor who studied under Alexandra Danilova, the famed Russian born ballerina. After teaching several productions of the Nutcracker ballet, Arlene became enamored by the history of the tools, and began her collection. She has been traveling annually to the Nutcracker Collector’s Convention in Neuhausen, Germany each year since the early 1980’s. Arlene and her collection have appeared on Conan O’Brien’s late night television show, the Sunday Morning program of CBS News, and were featured in an A&E Network special. In 2005, the museum published a coffee table book, “The Art and Character of Nutcrackers” which showcases 1,000 of the ‘personalities’ on display at the museum.

Ongoing Programs and Education: Tours at the museum may be arranged for groups of up to 25 at a time. Each tour begins with a 15-minute video outlining the history of the nutcracker, followed by a demonstration of some of the museum’s most rare nutcrackers in action.

Nutcracker Hunts are scavenger hunts, with lists provided by the museum. A variety of nutcracker hunts are available, suitable for both children and adults. The scavenger hunt encourages children to take their time browsing through the exhibits.

Nutcracker Day takes place in July of each year. The annual event is host to special events and activities, including the annual children’s Nutcracker Making Contest. The contest offers prizes for a range of age groups, and the winning nutcrackers are displayed at the museum. The Leavenworth Ale Fest takes place each April and showcases local brews and the Bavarian Village. Proceeds from the Ale Fest benefit the Nutcracker Museum.

What’s Nearby: The Nutcracker Museum is located in the Bavarian Village of Leavenworth. The Bavarian Village offers a detailed recreation of a German Alps village in America’s Pacific Northwest. The town’s effort at transforming into a tourist attraction began in the 1960’s as the timber industry was faltering. The Nutcracker Museum is housed on the second floor of a shop that sells nutcrackers and other German souvenirs.

More Things to Do in Leavenworth

23 Best Free Things to Do in Seattle Year Round

25 Best Things to Do on Bainbridge Island, Washington