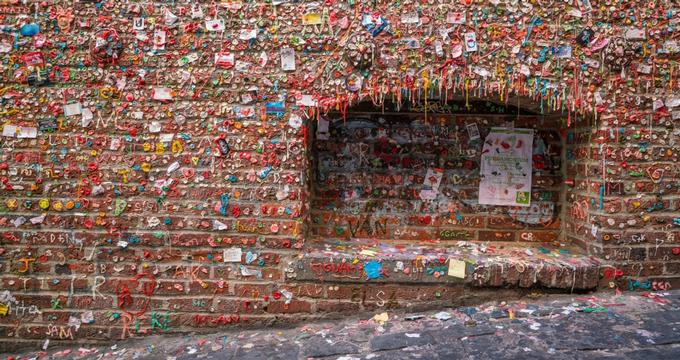 Down an alleyway in the downtown area of Seattle, is the Market Theater Gum Wall. Just as the name suggests, it is literally a brick wall that is covered in chewing gum that visitors and passersby have placed there. The gum-covered brick wall is located under famous Pike Place Market in Post Alley, and is similar to the Bubblegum Alley that is located in San Luis Obispo, California. Pike Place Market is one of the oldest farmers market in the United States, and is worth a visit as well. The Market Theater Gum Wall is now considered a local landmark of the city of Seattle. At times, sections of the Market Theater Gum Wall are possibly covered in gum several inches thick for fifty feet in width and fifteen feet high.

Located near the Market Theater's box office, the gum-covered wall tradition first started around the year 1993. Visitors to Unexpected Productions' Seattle Theatresports started to stick their used gum to the nearby wall, as well as placing coins into the wads of gum. Workers from the theater scraped the gum off of the wall twice. Around 1999, the workers eventually gave up on cleaning off the gum wall after officials with Pike Place Market deemed it a city tourist attraction. Several people have even created small pieces of art on the wall out of gum.

In 2009, the Market Theater Gum Wall was named one of the world's top five germiest tourist attraction. Listed as the number one germiest tourist attraction was the Blarney Stone in Ireland. The gum wall is a popular site among wedding photographers, and is also the starting location of a Seattle ghost tour. In 2008, a scene from the 2009 Love Happens film starring Jennifer Aniston was shot at the gum wall.

The Pike Place Market Preservation and Development Authority announced on November 3, 2015 that the Market Theater Gum Wall would be completely scrubbed down for steam cleaning and maintenance. This was the first time in twenty years that the wall would receive a total scrub down. The cleaning of the gum wall needed to be done to prevent the bricks on the wall from eroding further due to the sugar in the gum that has covered the wall for such a long amount of time. The work to completely clean off the Market Theater Gum Wall started on November 10 and took a total of 130 hours to scrape off and dispose of more than 2,350 pounds of gum.

It didn't take long at all after the cleaning was completed on November 13 for gum to be stuck to the wall again. Among the new additions of gum to the wall were memorials to the Paris attacks that happened that month. A flash mob met at the newly cleaned wall to add gum to it. The gathering became a show of support for Paris after the attacks. This group created the Eiffel Tower in the center of a peace sign out of gum as a replica of the image that had gone viral in the wake of the attacks.

Things to Do in Leavenworth, Washington: Leavenworth Nutcracker Museum

Things to Do in Tacoma: Children's Museum of Tacoma