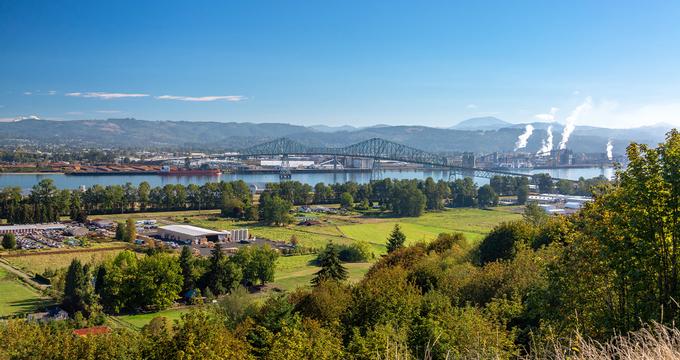 Sitting in the shadow of Mount St. Helens volcano is the city of Longview, Washington. With an estimated population of over 37,000, Longview is one of the most populated cities in Cowlitz County. Visitors to Longview can be entertained at one of the many parks, museums, or natural wonders in the area. Food options are vast, some specifically geared toward visiting foodies. The annual Squirrel Fest began in 2011 and features the unveiling of a squirrel-specific bridge (for squirrels to cross busy roads).

The lumber mill was the first industry in the developing city of Longview, WA. It is no surprise, then, that one of the great activities for the area includes a visit to the Rutherglen Mansion, built for J.D. Tennant, the vice president of Long-Bell lumber company. This mansion boasts grand space with seven bedrooms, each with its own bathroom and/or fireplace. Along with bedrooms, visitors will want to see the grand fireplace, conservatory, and a large staircase in the entry. Now on the historic registry, Eric and Mariko Thompson purchased the mansion in 2016 and hope to once again make it into a bed and breakfast for visitors.

The Lewis and Clark Bridge was designed by Joseph Strauss, of Golden Gate Bridge fame. When originally built, this was the longest cantilever bridge in the U.S. Today, it still stands at over 8,192 feet long over the Columbia River. It essentially connects Longview, WA to Rainier, OR. In 1982, it was added to the National Register of Historic Places. Those who cross the bridge no longer pay the toll that was once in place, and if you decide to travel to Rainer, you’ll be greeted by the glorious sight of the bridge sitting before Mt. St. Helens.

At Par 71, this golf course is designed for golfers of all skill levels. This 18-hole course was designed by Ron Freem, the international architect for PGA pro Mahlon Moe. Though its beginnings were rocky, the course has become popular among both locals and tourists. Mint Valley Golf Course partners with the Valley Golf Academy to train the next generation of golfers. Along with Moe’s Grill, a great place to pick up a snack or burger, the Mint Valley Golf Course is home to chipping greens, a putting range, a 6-hole par 3 course, and a covered driving range. This course is walkable, but carts are available for rental.

Hike into the earth at the Ape Cave Lava Tubes just a short distance from Mt. St. Helens. At a roundtrip walk of 2.8 miles, the path is considered mostly easy with a leisurely return hike through lava formations in the forest. The location of one of America’s most well-known volcanic eruptions in 1980, these caves were formed over two millennia ago by slow-moving lava. When the outer layer of lava cooled, the inner magma was able to continue down the hill and drain before hardening, causing walkable tubes. There are two paths to choose from, the Lower Cave or the Upper Cave. Though considered safe, there are puddles and loose rocks throughout the caves, and the Upper Cave is the more rugged of the two trails.


Marc and Nancy Roland founded Roland Wines to bring a love of wine and relationships to the Longview area. The Roland family wants to make wine an accessible and fun lifestyle, not just reserved for wine snobs. Roland Wines has a wood-oven pizza oven on site to create delicious pizzas to go along with the wines for any scheduled events and tastings. Visitors can enjoy wine tasting in the tastings room Wednesday through Saturday. Other platters are available for purchase to accompany wine choices. Some of the popular Roland wines include Foggy Notion Red and White, Solstice Syrah, the Olifont, and Durandel.


Originally established in Culver City, CA, Sizzler Family Steak House has kept with the basic cooking principles since its founding. The Longview location is just one of three Sizzler locations in Washington. Along with delicious steak options, Sizzler is home to the Craft Salad Bar, which features over 50 fresh-cut ingredients. But beef and salad are just the tip of menu options at Sizzler; customers can choose from chicken, seafood, and burger selections. For those who can’t choose between options, combo plates, like steak & lobster or steak & Malibu chicken, are available. Sizzler is open seven days a week for lunch and dinner.

The new 20-pound cinnamon “party roll” is not the only reason to check out Stuffy’s II Restaurant. The mission of the restaurant is continuous fresh food and large portions. The original Stuffy’s opened in 1988. Since then, the second Stuffy’s keeps monthly specials menu, which features meals planned specifically for holidays and seasons. In fact, decorated trees are a staple for diners to admire, no matter the season. The Stuffy’s Hall of Fame is home to pictures of patrons who dared to complete one of the three food challenges: the bear roll, large stuff (7 lbs of food), or almost a dozen egg omelet.

Hungry for some quick service Mexican food? Taco Time was founded in 1962 and is now on its fourth generation of ownership. Each year, the 75 local Taco Times serve over 12 million customers or twice the population of Washington state. It’s no surprise when looking at the menu. One of the key menu items that all combos come with is Mexi-Fries, which are freshly seasoned tater tots. Crunchy and soft tacos are popular, as are the burritos and rice bowls featuring coconut shrimp, chicken, pinto beans, fried fish, or ground beef. Dessert offerings are limited, but tasty: churro bites and crustos (seasoned deep-fried flour tortillas).

Full of gluten-free and vegan-friendly items, the Office 842 built their menu with the foodie in mind. With daily happy hours, patrons can purchase tapas and one of the 42 specialty martinis on the menu. Consider trying one of the top-secret recipes, like the Cantaloupe, or a local favorite, like the Mt. St. Helens 9featuring a Pop Rocks rim). Breakfast options are also available to go with handcrafted espresso drinks. Not just a restaurant, the Office 842 is an Internet café, featuring relaxing and rich décor. Customers can order online, in person, and on the Office 842 app for smartphones.

23 Best Things to Do in Woodinville, WA