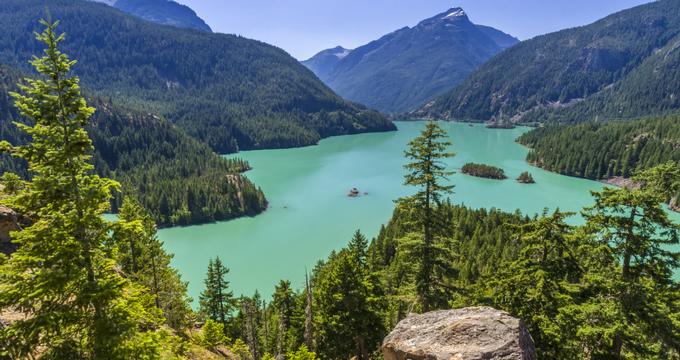 The Pacific Northwest is one of the United States’ most geologically diverse regions, showcasing rugged fjord coastlines, temperate rainforest areas, and the spectacular peaks of the Cascade, Coast, Olympic, and Columbia Mountains. Several active volcanoes dominate the region’s skyline, including Mount Rainier, standing at 14,411 feet as the region’s highest peak. Coastal Douglas fir trees populate lushly forested regions, including some of the world’s tallest trees. These nine national parks & recreation areas within the region are conveniently accessible from major cities such as Seattle, offering a wide variety of day trip opportunities for visitors looking for outdoor exploration, historically-focused learning, and wilderness adventures. 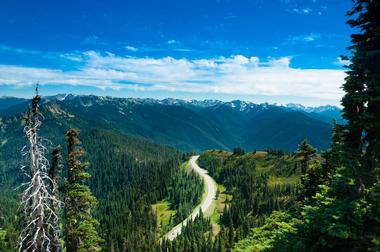 Olympic National Park spans nearly one million acres within Washington’s Olympic Peninsula, showcasing diverse areas of Pacific coastline, temperate rainforest, dry forest, and alpine ecosystems. The park was originally designated as a National Monument in 1909 before being converted into a national park in 1938. Today, it has been designated as a UNESCO World Heritage Site and offers more than 70 miles of rugged wilderness coastline for visitor exploration and beach backpacking, including the popular nine-mile Ozette Loop. For more adventurous visitors, the park’s interior rainforest and alpine areas offer day-hiking experiences. Three visitor centers within the park offer museum exhibits, documentary films, and interpretive nature trails and serve as launch points for ranger-led wildlife watching and night sky programming. Other popular park activities include boating, fishing, skiing, snowshoeing, and camping at one of the park’s 16 campgrounds. Where to Stay near Olympic N.P. 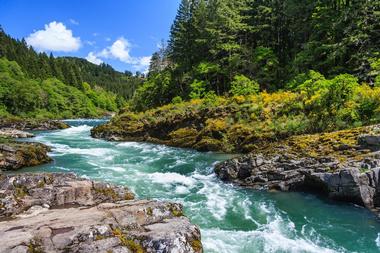 North Cascades National Park is the central unit of the North Cascades National Park Complex, which spans more than 680,000 acres throughout the state of Washington and the Canadian province of British Columbia. The park was established to preserve the North Cascades glacial range, the most expansive system of its kind in the contiguous United States, and its associated waterways and forests. The mostly undeveloped park’s ecosystems are noted for containing the highest level of plant biodiversity of any American national park, offering a wide variety of opportunities for nature exploration, wildlife watching, and photography. Popular wilderness exploration activities for visitors include hiking, camping, and mountaineering, which all require a visitor permit. Two visitor centers are located within the park, including the Golden West Visitor Center, which showcases a gallery of works by local artists. 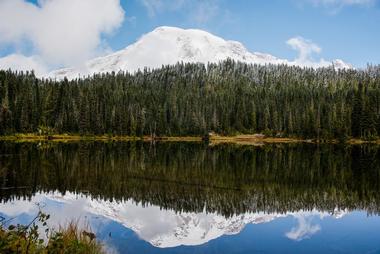 Mount Rainier National Park is a 236,000-acre national park within Pierce and Lewis Counties that was established in 1899 to preserve the region surrounding the 14,411-foot Mount Rainier stratovolcano, the Cascade Range’s largest peak. Today, the park receives more than 1.4 million annual visitors and is a popular spot for hiking and mountaineering, with more than 10,000 visitors attempting to reach the volcano’s summit each year. The park’s Wonderland Trail passes several notable glaciers, including the largest glaciers in the United States by both volume and area, while its Sunrise observation peak, the highest point in the park accessible by vehicle, offers spectacular views at a height of 6,400 feet. Facilities within the park include the Longmire Museum, the Henry M Jackson Memorial Visitor Center, and a number of hotels, restaurants, and campgrounds within the park’s five developed units. 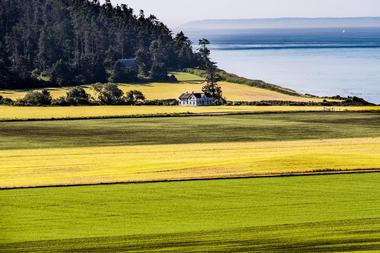 Ebeys Landing National Historical Reserve is located within the Puget Sound on Whidbey Island, a short distance from the seaport city of Coupeville. The reserve protects a significant 19th-century settlement area with a unique unbroken historical record, with historic farms still in operation that date back to the 1850s Donation Land Claim Act. It is under joint national, state, and local management and encompasses Fort Casey, Fort Ebey, and Ebey’s Landing State Parks, which offer attractions such as historic lighthouse and fort tours, visitor hiking trails, and scuba diving experiences. Popular outdoor activities include boating, fishing, and mountain biking, while nearby Coupeville showcases historic attractions such as the Island County Historical Museum. Though no official NPS visitor center is maintained at the site, the Jacob and Sarah Ebey House serves as a seasonal volunteer-run visitor center. 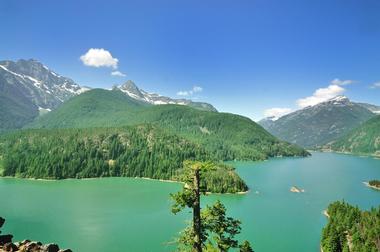 
Ross Lake National Recreation Area is part of Washington’s North Cascades National Park Service Complex, which is centered around North Cascades National Park and also includes the Lake Chelan National Recreation Area. The recreational area spans the length of the Skagit River along the American-Canadian border and was designed to prevent flooding within the nearby national park. As a major recreational destination in the Pacific Northwest, the NRA contains the man-made Ross, Diablo, and Gorge Lakes, which offer ample fishing, canoeing, and kayaking opportunities. Trailheads within the area connect to trails in the nearby national park, and a number of campgrounds along North Cascades Highway offer opportunities for overnight stay with tent and RV hookups. The NRA is also the site of the Desolation Peak Lookout fire tower, which was featured in the Jack Kerouac novel Desolation Angels. 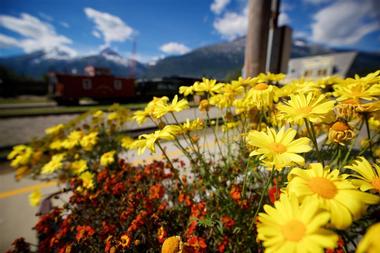 
Klondike Gold Rush National Historical Park commemorates the 1897 Klondike gold rush, which brought approximately 70,000 people to Washington state and southwestern Canada in search of striking it rich in the Yukon’s gold fields. The rush is noted as helping to bring an end to the Panic of 1893 economic depression and was a key factor in the economic development of Seattle as a major American city. Today, the rush is chronicled at the National Historical Park’s visitor center and museum, which is located within Seattle’s historic Cadillac Hotel. Two floors of interactive exhibits are offered, along with periodic daily showings of three documentary films about the event. 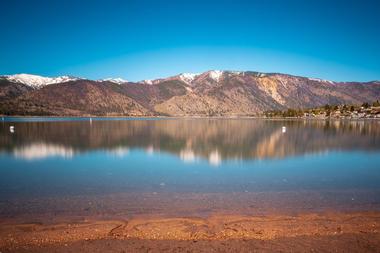 Lake Chelan National Recreation Area is part of the North Cascades National Park Complex, spanning more than 61,000 acres near Lake Chelan and the Stehekin River Valley. Throughout much of the year, the recreation area is only accessible via passenger ferry or floatplane from the nearby town of Chelan or from one of several hiking trails within the Cascade Range and the nearby national park, though an off-road bus access service is operated for hikers during the summer months. It is serviced by the national park’s Golden West Visitor Center and contains several notable historic sites, including the Buckner Homestead Historic District and the Stehekin School. The unit’s central lake, which reaches depths of more than 1,500 feet, offers ample opportunities for boating, fishing, and shoreline camping. 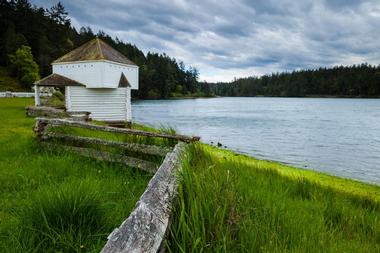 San Juan Island National Historical Park is located on Washington’s San Juan Island barrier island within the Puget Sound, near Vancouver Island and the Haro and Rosario Straits. The park was established in 1966 to preserve the American and English Camps, two historic campsites established by the United States and British Armies during the 1859 Pig War. The camps were peacefully occupied by the armies for more than a decade as part of a boundary dispute over island territory and are listed on the National Register of Historic Places today. Several surviving structures are preserved within each camp, including commissary, barracks, officers’ quarters, and hospital buildings. Two visitor centers offer exhibits and park information, and hiking trails provide ample opportunities for bird watching, berry picking, tidepooling, and shelling.